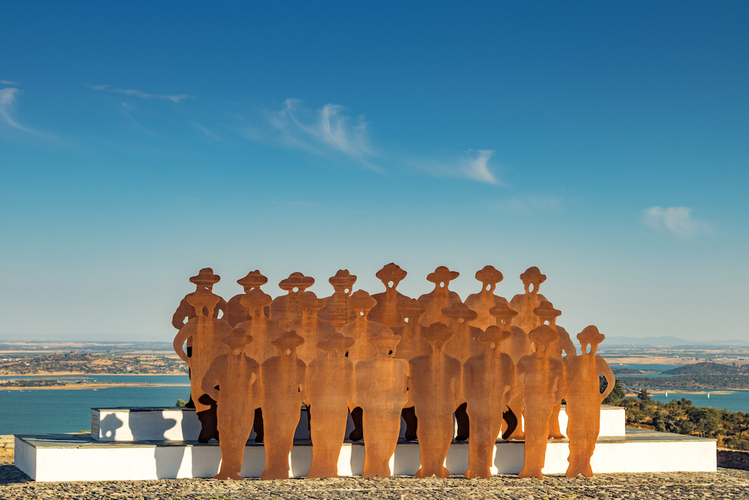 Long gone are the days when Portuguese tourism centred on the Algarve. Visitors are fast realising there’s plenty more to mainland Portugal than its coastline - from cosmopolitan cities like Lisbon, Porto and Coimbra to beautiful geoparks and the wineries of Douro Valley.

One area that remains relatively undiscovered, however, is Alentejo (literally ‘beyond Tagus river’), an area of south-central and southern Portugal that feels refreshingly unspoiled. While you’ll find some of Europe’s best beaches here, Alentejo also has much to offer inland; picture-postcard villages, UNESCO-designated crafts and a warm welcome besides.

From Lisbon it’s just a 1.5-hour drive to the region’s capital of Évora, starting with the impressive Vasco de Gama bridge. Not only is this Europe’s second longest bridge at 7.6 miles, you might even luck out like we did and spot a flamboyance of flamingos (yes that really is their collective name). Then follows a picturesque drive through golden plains peppered with cork trees and unwieldy stork nests: what with very little traffic and good roads to boot, it's a dreamy contrast to driving in Blighty.

Capital Évora is a UNESCO World Heritage site whose historic walled centre has been shaped by over 20 centuries of history. Highlights include the Roman Temple of Diana, the 13th century cathedral and a myriad of monuments which sprang up following its golden age in the 15th century; from royal palaces to bone chapels and churches tiled in stunning azulejos.

But even just meandering around this small ‘city’ is a pleasure. Like many places in Alentejo, its whitewashed buildings (often trimmed in yellow or blue), cobbled streets and shady terraces - perfect for enjoying a glass of fresh orange - encourage a slower pace of life.

After somewhere to dine? Restaurante Fialho is one of Évora’s oldest and most esteemed restaurants, with former visitors including Jane Russell and Tony Blair. Its extensive regional repertoire spans local cheeses with pumpkin jam to cod fish carpaccio, Cartuxa-style partridge and bread soup with dogfish and coriander. Desserts typically include egg and sugar as their main ingredients, flavoured with the likes of cinnamon and almonds. Fialho also has a comprehensive wine list, and we found the service to be very efficient.

It was a short walk back to our hotel for the night, located just two minutes from the city walls. While part of Portugal’s second largest hotel group, each Vila Galé Hotel retains a unique character, and Evora’s four-star branch is inspired by Alentejo culture; think sleek marble décor, popular lyrics and equestrian artworks.

After a blissfully quiet night (I didn’t use my earplugs on the whole trip), Arraiolos beckoned the next morning. A 25-minute drive from Évora, this pretty little town is famous for its handcrafted rugs: while officially dating from the Middle Ages, some believe the tradition began even earlier when the Moors conquered Portugal, bringing the Persian influences that many of these embroidered tapetes now bear. Painstakingly stitched by a clutch of nimble fingered women, some take an astonishing six months to make. Unsurprisingly, however, little pay and long work isn’t attracting younger generations…let’s hope a custom of centuries doesn’t die out.

While the aforementioned rugs can cost over €500, smaller versions are more affordable and my travel companion brought a cushion cover for €50. Shopping aside, there’s also a small but engaging museum on the town square.

Pousada de Arraiolos - one of a chain of luxurious inns across Portugal, many blending historic surroundings with modern touches - made for a rather special lunch spot. This 16th century convent offers (amongst other things) two swimming pools, spa, tennis court and even its own handsomely tiled chapel. The restaurant features panoramic views of the surrounding countryside, wines from across Portugal and confident regional dining: favourites included the superb local asparagus, stewed pork in red wine and the convent’s signature chicken pie.

Onto nearby Estremoz (whose own pousada, in a 13th century castle built for Queen Santa Isabel, is replete with period furniture and even canopied beds). One of Alentejo’s fortified white settlements, this small city is also famed for its artisan heritage - this time in the form of clay characters, often brightly painted and depicting provincial traditions.

Inscribed by UNESCO in 2017, these distinctive figures can be seen in the municipality museum; an eclectic place crammed with artefacts from carved horn vessels to dioramas of cork. But, to see the pottery process in action, you’re best visiting one of the handful of workshops: Atelier Irmãs Flores (above) is the best known, and even large figures generally cost less than €75.

Those after a standout Alentejo stay would do well to surpass our next lodging, Casa do Terreiro do Poço. Owned by a visionary couple who trade in antiques and filled with furnishings from across the globe, this sprawling historical complex even boasts themed bedrooms (my ‘kitchen’ suite included utensil artworks and a bedside table resembling a cooker) and period features including an 18th century winery, taberna and original frescoes. Located in the peaceful village of Borba, it also offers activities such as cooking lessons and bike rides. Next destination: Elvas, a frontier town best known for its unusual star-shaped fort. Designated a UNESCO World Heritage Site in 2012, Forte da Graça’s proximity to Spain saw it fight off Spanish troops in several battles before becoming a political prison during the Civil War. Guided tours are available and there are expansive views across Elvas, including its magnificent 16th century aqueduct.

Its birthplace, Santa Luzia Hotel, is Portugal’s oldest inn; another alluring blend of classic and contemporary, from the chic décor to floodlit pool and traditional hand painted furniture in its 25 rooms. As well as the iconic bacalhau dourado, other specialities we tried here included black pork sausage (more than a match for chorizo) and the esteemed Elvas plums, whose trees were a common sighting on the scenic drive to Monsaraz...

Perched on a hilltop overlooking one of Europe’s largest artificial lakes, this well preserved medieval village is perhaps the region’s most attractive - and that takes some doing. Whitewashed buildings sport rows of artisanal shops, cobbled streets brim with flowers and olive groves sprinkle the surrounding plains. Attractions include the castle and bullring, plus a Jewish history centre, but Monsaraz is mainly a place to relax. Sunsets here are legendary and the nearby Dark Sky Reserve comes highly recommended.

While the village itself has several acclaimed restaurants, we had dinner at São Lourenço do Barrocal; an ancient farming village which has been converted into the epitome of understated luxury. Located just 4.3 miles from Monsaraz, the 780-hectare estate (in the same family for over 200 years) spans walled gardens to orchards and 24 stylish lodgings. Needless to say there are top-notch amenities, while activities include horse rides, kids’ treasure hunts, archaeological visits and even hot air ballooning.

Backed by a stunning feature wall, the restaurant serves a contemporary slant on Alentejo cuisine; offering dishes like fava beans with regional sausage and strawberries, veal cheeks with sweet potato puree and olive oil and lemon pudding for dessert. Many wines are made on the estate, using esteemed Portuguese grape varieties such as Touriga Nacional and Alicante Bouschet, and tasting sessions are offered too.

Our last night in Alentejo was spent at Monte Saraz - a peaceful complex of rooms and self-contained suites, centered on a Moorish pool - before the final stop of the holiday, Pardalinho cowbell factory.

Alas we continued onto Lisbon airport and the end of our trip, amazed that Alentejo is still a secret.

Vicky Smith flew out with TAP Air Portugal; which flies direct from London City Airport, Heathrow, Gatwick and Manchester to Lisbon International Airport up to 12 times a day. Prices start at £43 one way including all taxes and surcharges. For further information, visit www.flytap.com or call 0345 601 0932.

UNESCO (United Nations Educational, Scientific and Cultural Organisation) is a branch of United Nations. Its aims include promoting peace, equality and cultural heritage. Initiatives referred to in this article include the World Heritage Convention and Intangible Cultural Heritage.