Autumn's here, the kids are back at school and Christmas is round the corner. Dropping the C word already? Sorry not sorry. We already know which Hollyoaks actor is doing panto this year because that email landed in June.

All the big guns have launched their new programmes and Liverpool's newest venue, The Tung Auditorium, has its own impressive line-up. As well as orchestral, choral, chamber, jazz, folk and electronica shows, The Tung is also testing out the technical capabilities of the 400-seat venue with live music for film and two chamber operas. But more of that in next month's round-up.

Read on for the top things to do in Liverpool this September...

Come and explore Burman's “Merseyside Burman Empire” - an experimental space filled with eye-catching designs and artworks. Born in Bootle to Punjabi-Hindu parents, Chila’s unique style and understanding of “Britishness” has been shaped by her working-class childhood. Inspired by this, Chila’s desire is to make this space feel like a living room: filled with comfort, identity and an invitation to spend some time. Spilling out from the walls, onto the furniture and emblazoned on the Tuk Tuk are Chila’s renowned motifs. Hindu deities, glitter, bindis and tigers surround three films based on her own stories and experiences.

Legendary Keane lead singer Tom Chaplin plays an intimate album launch for Jacaranda Records in support of his new album Midpoint. Chaplin released one of the biggest selling UK albums of all time with Keane’s 2004 chart-topping Hopes & Fears. Not forgetting his performance as Poodle on The Masked Singer.

The last 18 months have been strange. What have we learned and not learned? And how do you "get back to normal" if you’ve never been normal? Russell Brand attempts to answer these questions and more in his latest live show, 33.

THE CHOIR WITH NO NAME | EVERYMAN THEATRE | FRIDAY 9 SEPTEMBER

The Choir with No Name (CWNN) Liverpool, a choir involving people impacted by homelessness, returns with its annual "Big Gig" and special guests the Wrexham One Love Choir and Brian Nash from Frankie Goes To Hollywood. CWNN Liverpool will be raising the roof - as well as vital funds to support the cost of keeping the choir running. Expect an uplifting evening of rock and pop classics and plenty of sing-along fun for all the family.

Following on from 2021’s success in raising over £43,000 for Claire House Children’s Hospice, The Mowgli Dog Fest is back for two days of canine competitions, great local food, drink and craft stalls, alongside live sundowner acoustic sets, funfair attractions and children’s activities. The main arena will be hosted by Jonny Bongo along with Heart Radio’s Adam Weighell.

The story of four ordinary lads who, inspired by the punk revolution of 1970s Manchester, came together to form one of the most influential bands of all time. This autumn tour marks more than 40 years since the release of Joy Division’s debut album Unknown Pleasures. The character of Tony Wilson narrates, and takes audiences on a breath-taking whistle stop tour of 2,000 years of Mancunian history, uncovering the surprising influences on Joy Division’s music – from Roman General Julius Agricola and Frederich Engels, through to Dr John Dee and many more.

Yes, the legendary actor, host and broadcaster Craig Charles of Red Dwarf, Robot Wars and Coronation Street fame is also one of the UK’s best loved funk and soul DJs. Broadcasting for 10 years on BBC 6 Music with their primetime Saturday night slot, Craig Charles has gone from strength to strength, becoming a commanding figure and DJ in the UK funk and soul scene. Alongside his own unique performances, Craig brings with him a host of guests from the funk and soul world.

The autumn programme for Liverpool’s new, state-of-the-art concert hall, The Tung Auditorium, is now available to book, with British jazz legend Courtney Pine headlining with new material from his forthcoming album, Spirituality. Courtney will be joined on piano by Zoe Rahman and a string quartet as the duo pick up from where they left off with the release of their much-heralded project, Song (The Ballad Book).

The ultimate firework competition across three nights, with choreographed displays and an array of light and music. Starting on Friday, competitors will host jaw-dropping pyro wizardry, with a panel of professional judges marking each display after the event, before announcing the winner on the Sunday evening in a closed ceremony. During the competition, over two tonnes of explosive material are used with the total weight of fireworks over 10 tonnes. Each show requires around 5 kilometres of wire to connect the electrical circuits and around 15 technicians working for over 12 hours to set up the display. Fact fans.

Tate Liverpool’s location on the city’s waterfront, combined with our maritime history, provides the perfect context for us to consider Turner (1775–1851) afresh. Almost a third of Turner’s work features the sea; from the paintings that first established his reputation to his late experimental canvases. By the end of his life, Turner had defined an entirely new marine aesthetic in British art and beyond. Conveying the intensity and diversity of life on the ocean, Turner’s work will be presented for the first time within an immersive sound environment created by artist Lamin Fofana.

Life moves pretty fast. What year was Ferris Bueller released? Anyone? Anyone? It was 1986 - nearly four decades ago - and if that doesn’t make you feel old then please let us know your secret. The Plaza cinema continues with its 80s-themed movie specials and John Hughes’ teen classic - the film about a high school wise guy who is determined to have a day off from school, despite what the principal thinks of that. DJ Nick Gartland will be playing 80s tunes from 6.45pm so get there early to soak up the retro atmosphere.

The third supper club from Livia Alarcon, this time the former head chef at Queen’s has teamed up with the lads at Astral to transport the evening to the sonic airwaves. Located within the Tapestry on Kempston street, SCALE will be hosting a journey of 'In Flight Dining', with Astral mixing live electronic beats. A unique dining experience injecting fun into a supper club environment.

From museums, galleries and stately homes to science labs, industrial units, and even graveyards, Heritage Open Days offers local people a chance to see another side to their communities, including places that aren’t normally open to the public. This year’s theme – Astounding Inventions – puts the spotlight on the pioneers whose creations we couldn’t live without and the inventors whose work has been overlooked. Liverpool highlights include Williamson’s Tunnels, Greek Orthodox Church of St Nicholas, The Blue Coat School, Wavertree Lock-up, Speke Hall and the Ancient Chapel of Toxteth.

For more information and to search all events, visit Heritage Open Days.

Celebrating five years of the festival, Blackfest continues to celebrate, cultivate and nurture black artists and communities through the claiming of historic buildings and spaces for art, trade and culture. This year’s line-up features ten events and ten venues, with visual arts, music, dance, theatre, poetry, film and workshops. Highlights include As British as a Watermelon at Unity Theatre, Rhythms - Riddims Night at the Philharmonic Hall, Spoken Word Poetry Night at Hope Street Theatre and a screening of Displaced at FACT.

Tickets are available for all events from Eventbrite.

St George’s Hall Beer Festival is back with four sessions of beer, cider, entertainment and good times. Featuring up to 200 real ales including IPA’s, pale ales, stouts, craft lagers and traditional ciders. As well as all manner of new and exciting styles of beer and cider lining the walls of the Great Hall, the “alternative bar” will feature gins, prosecco and other drinks – no one will go thirsty, that’s for sure. Expect street food, games and music.

Read next: Liverpool Theatre Festival 2022: what's on and how to get tickets

Read again: To the TARDIS! Doctor Who lands in Liverpool 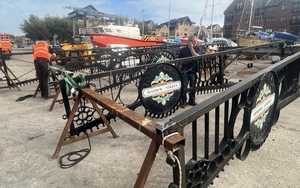