The cream of Bristol? Go with the flow 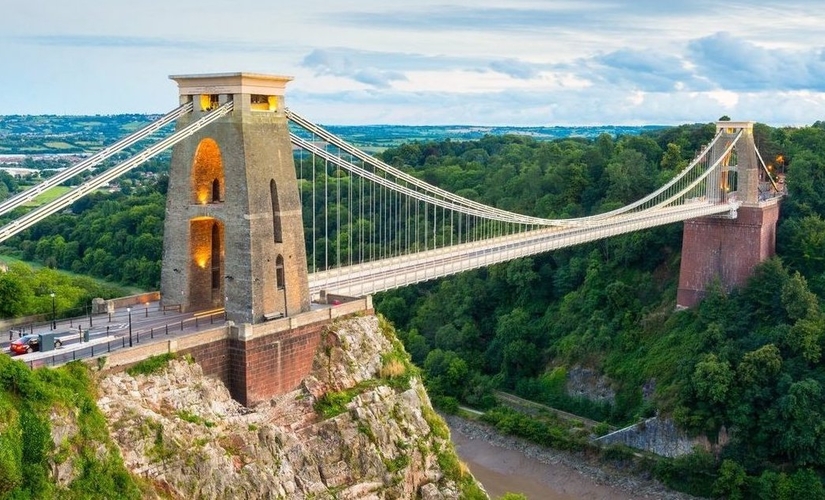 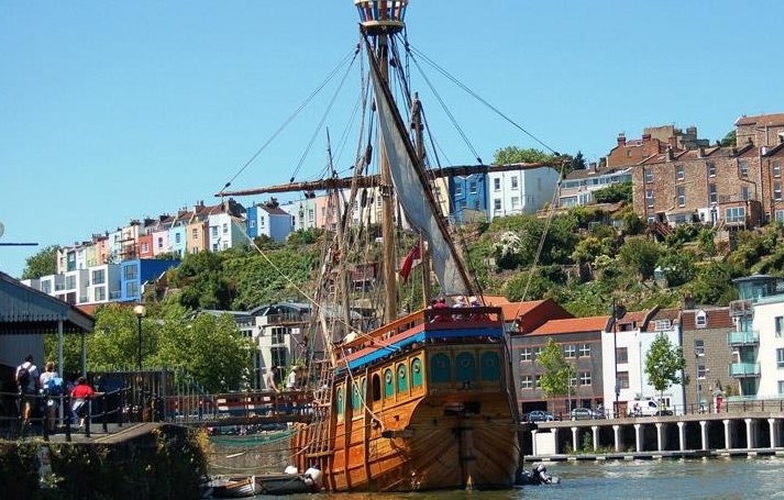 BRISTOL is built on booze. From its days as a fulcrum of the sugar and slave trade that meant rum, but even back in the 12th century imported wine had been kept in a warren of cellars beneath the city. In 1793 Avery’s wine merchants was founded (their gorgeous cellars are still selling wine not far from the the Cathedral); three years later on the site of a 13th century Augustinian monastery the merchants that  became Harvey’s was born. By 1822 the ‘milk’ sherry blend that made their fortune provoked an aristocratic lady visitor to declare “If that is milk, then this is Cream.”

In 2018 we are sitting in the Small Bar, not far from Georgian Queen’s Square, the extant architectural exemplar of that sugar trade wealth, and extolling the virtues of the city’s vibrant craft beer boom. Today’s tipple of choice in a city that definitely enjoys its food and drink.

The King Street bar is owned by Left Handed Giant Brewing who, while we are in Bristol, are brewing a collab beer with equally hip Moor Brewing and Lost and Grounded for Manchester Beer Week’s Clash of the Cities competition to find the UK’s best beer city. It’s a Berry Lush blackcurrant witbier, a homage to Ribena, which was originally manufactured in Bristol.

So Bristol attractions are not just centred on engineer Isambard Kingdom Brunel and explorer John Cabot or even the contemporary allure of Aardman Animations’ Wallace and Gromit. You could spend a satisfying weekend exploring the bars that make up King Street’s ‘Beermuda Triangle’ while taking in the street food of the Georgian St Nicholas Market or Thursday’s Harbourside Market, then head down to the shipping containers of ‘new frontier’ Cargo, down on Wapping Wharf, home to the coolest food and drink operators in town.

That’s what we did mostly, the company of our pet chihuahua Captain Smidge denying us access to the museums and shopping opportunities 21st century Bristol prides itself upon. Fortunately we had a dog friendly base that combined comfort with a unique link to the city’s mercantile past. 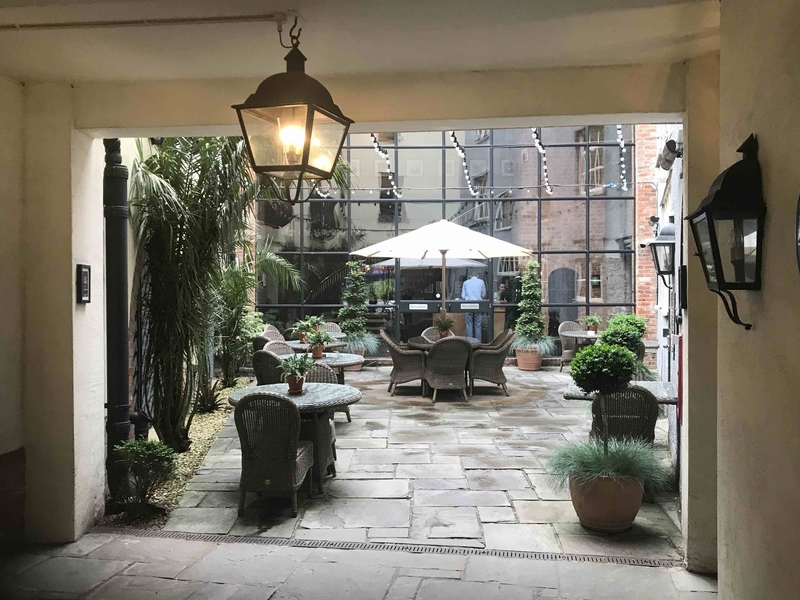 The location of the Hotel du Vin gives it away. ‘Sugar House’ on Lewins Mead is the sole surviving sugar refinery building. In 1760 there were 20 such, processing more than 378,000 kg of cane to satisfy the insatiable craze for sugar. Cane harvested by the slave populations of the Caribbean.

Where once the air was full of steam and the stench of wet molasses, today’s much restored Grade 2 listed Sugar House is a comfortable haven with preserved industrial features (exposed brick and cast-iron pillars) and a nod to a gentleman’s club (wood floors, leathery chairs, rich dark colours like chocolate, navy and gunmetal).

As is the norm in the HduV chain rooms are named after wineries. Pol Roger would have been posh; we got Aussie giant Rosemount. The best name drop in the hotel was the gorgeous Salcombe cock crab with scrambled eggs for breakfast. Smidge enjoyed the sausages. Suitably fortified, we were to discover what a convenient base the Hotel du Vin is for this very walkable city. And also a very sailable one. The blue and yellow Bristol Ferry boats stop off at 17 landing stages along the winding River Avon from Temple Meads Station, stopping off at the major tourist attraction of the SS Great Britain, Brunel’s epic steamship, terminating at Hotwell quayside below the heady heights of Clifton and its vertiginous Suspension Bridge. And that was where we started our exploration of Bristol… 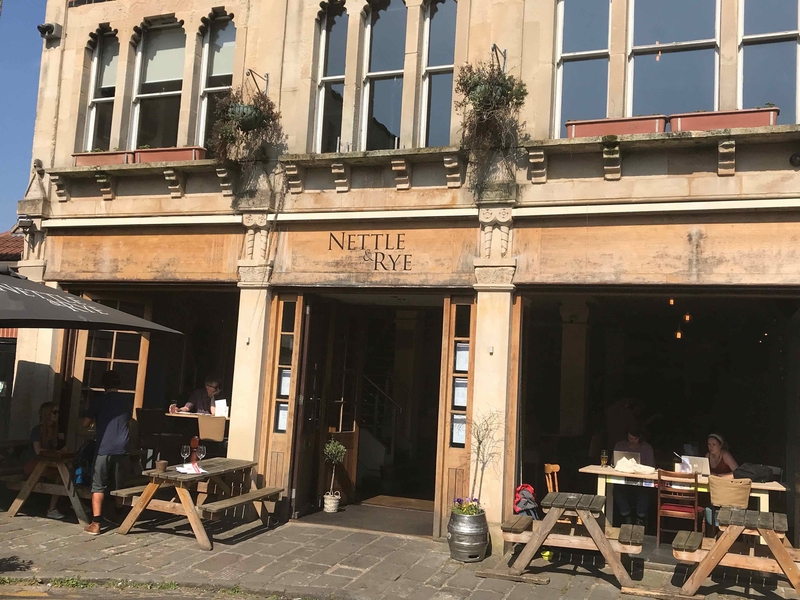 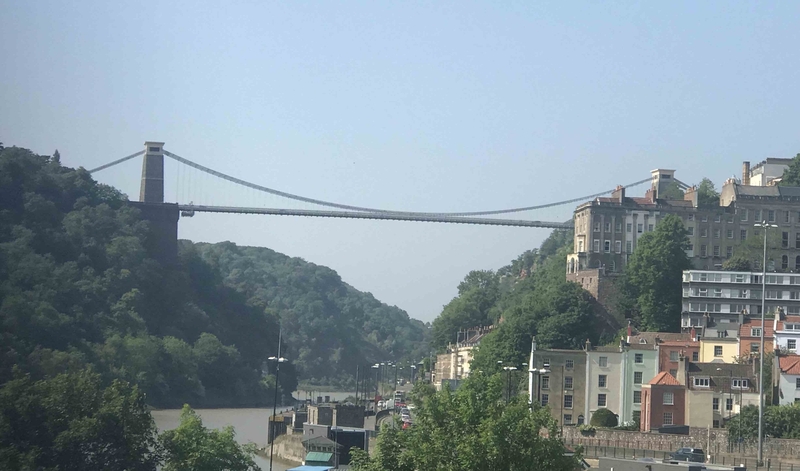 Clifton is synonymous with Brunel’s 702ft bridge straddling the Avon Gorge. Having originally been rejected four times for the contract the polymath architect never lived to see it completed. The nearby Clifton Observatory, a converted windmill, is home to a camera obscura and, in the cliffs below, the Giant’s Cave – home of folklore giants, Goram and Ghyston – which offer a perfect photo-opportunity. The relocated Visitor Centre at the Leigh Woods end of the bridge will flesh out the epic story of its creation.

Another more recent story led us to another stretch of Clifton woodland. Helen Dunmore’s final novel before her death from cancer last year, Birdcage Walk, is a haunting depiction of domestic terror and radical upheaval set in Bristol at the time of the French Revolution. The narrative is kickstarted by the discovery of a grave marker in the boneyard known as Birdcage Walk, which takes its name from the arches that line the walkway. This is all that remains of St Andrew’s Church – built in the 12th century but destroyed in the Bristol Blitz. It is one of many tranquil havens dotted around the city.

The imperious Georgian crescents of Clifton only became part of Bristol in 1835. The wealth and grandeur remain, but the cluster of boutiques and bars around Regent Street, Victoria Street and The Mall have a certain boho vibe. We rested up with fine beers at stripped back Nettle and Rye on King’s Road before descending to the city centre via another lovely green space, Brandon Hill. 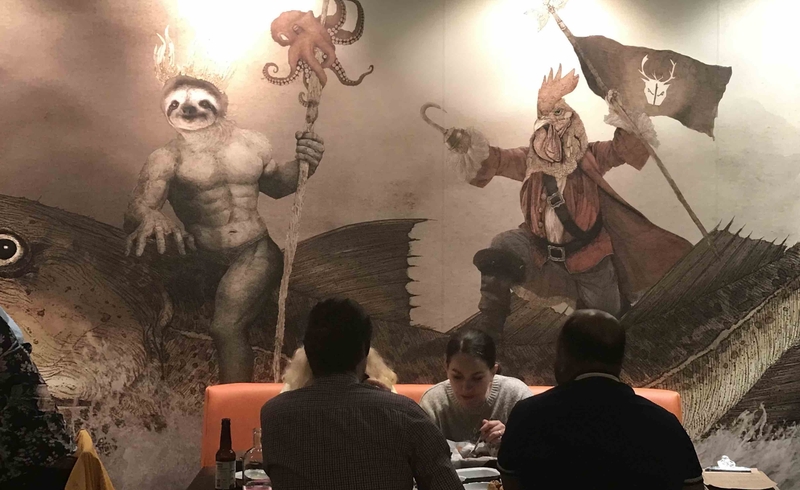 Cargo – we can’t contain ourselves

Time to get down by the riverside, hopping on and off a Bristol Ferry (our favourite is the one with a giant Gromit up on the prow). Our first port of call is Cargo a new hub of independent food and drink traders based in re-purposed shipping containers, alongside the M Shed, a museum devoted to putting historic Bristol in its social context.

At Cargo notably there’s a wonderful cheese affineur and a butcher’s selling grass-fed organic West Country beef. Michelin-starred chef Josh Eggleton has two casual outlets here – Salt & Malt selling gluten-free fish and chips and Root, where vegetables play the major role on some imaginative platefuls. We went back after dark, drawn inexorably by Wild Beer Company’s bar with great views, mad murals, barrel-aged beers and a buzz that’s not been seen on the waterfront since the days of the old sea dogs. 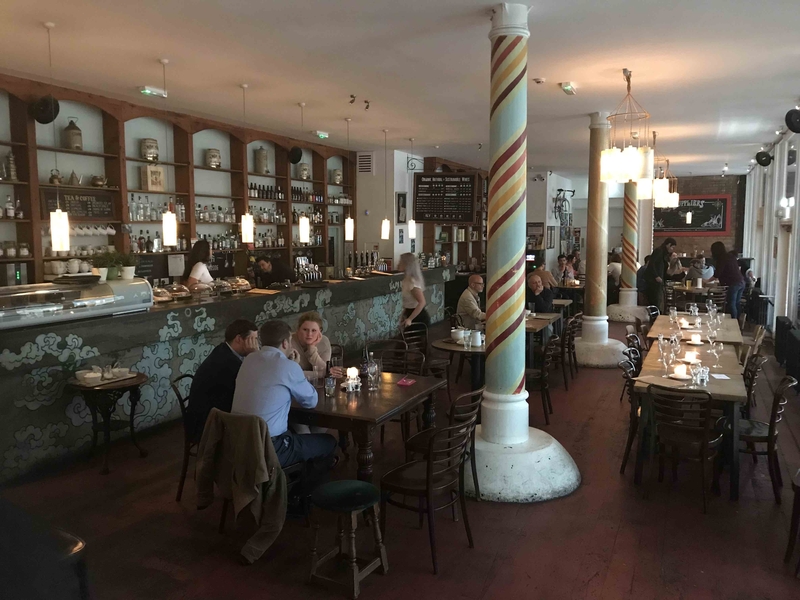 This name encompasses much of the waterside but its epicentre (home to the Planetarium, Aquarium and other attractions) is reached via Pero’s Bridge, whose central span can be raised to allow tall boats to pass along the floating harbour. It is named after Pero Jones, an African boy bought as a slave to work on the Nevis plantations of sugar baron John Pinney and brought back with him to Bristol. The house they lived in is now The Georgian House museum, a five minute walk from the equally visitable (and also free to visit) Bristol Cathedral.

Highly recommended just along from the Bridge and next to the ferry terminus is No.1 Harbourside, a bar/restaurant which flies the flag for sustainable food, craft beers, natural wines and live music in an irresistibly jolly package.

The beer highlight of our Bristol stay was undoubtedly meeting Moor founder Justin Hawke  (featured inn our opening gallery) at the brewery/tap a 10 minute walk from Temple Meads Station. Being named 2017 Brewer of the Year by the Guild of Beer Writers justified the Californian ex-pat’s move into the city from the Somerset Levels back in 2014, which helped ignited today’s vibrant brewing scene. A perfect introduction is the bars along King Street inn the city centre. A random selection – The Famous Royal Navy Volunteer (The Volley), The Beer Emporium, King Street Brewhouse and our rustic favourite, The Small Bar. At the other end of the street The Old Duke (named after Duke Ellington) is less beervana more an ace live music pub to finish the evening at. The Second World War and Sixties redevelopment took its toll on Bristol, so characterful enclaves around the Sugar House such as the Christmas Steps and, more substantially, the warren of streets that constitute the Old City, are the exception. But then you stumble upon Bristol’s oldest market St Nicholas Market (1743) and all is forgiven. In the glass arcade there are numerous food outlets – either takeaway or eat in street-food style – including Bristol-born pie company, Pieminister, Grillstock and Source Food Hall and Cafe. We loved the unruffled calm and sense of community pervading Bristol Cathedral, but it is always architecturally going to play second fiddle to St Mary, described by Simon Jenkins in his magisterial England’s Thousand Best Churches as a “masterpiece of British Gothic”. It’s the 292ft steeple (second only to Louth in Lincs) you notice as it rears above the red sandstone cliffs the church is built upon.

Enter via the wondrous medieval North Porch and the riot of detail ahead of you is almost hallucinogenic – the interior is a riot of vaulting with over 1,000 bosses made of gold. Above that North Porch is the room where Thomas Chatterton claimed to have discovered poetic manuscripts written by a 15th century monk (he had forged them). The ‘wondrous boy’ died of arsenic poisoning at just 18. Fellow Romantic poets Coleridge and Southey married the two Fricker sisters here; earlier Handel played the organ and Hogarth painted a Resurrection triptych.

So much back story – book a tour! The greatest curiosity you’ll find is the Chaotic Pendulum in the North Transept. Constantly in motion thanks to a flow of water, chaos is created because you are never certain where the pendulum will tip. Read here for a proper scientific explanation. 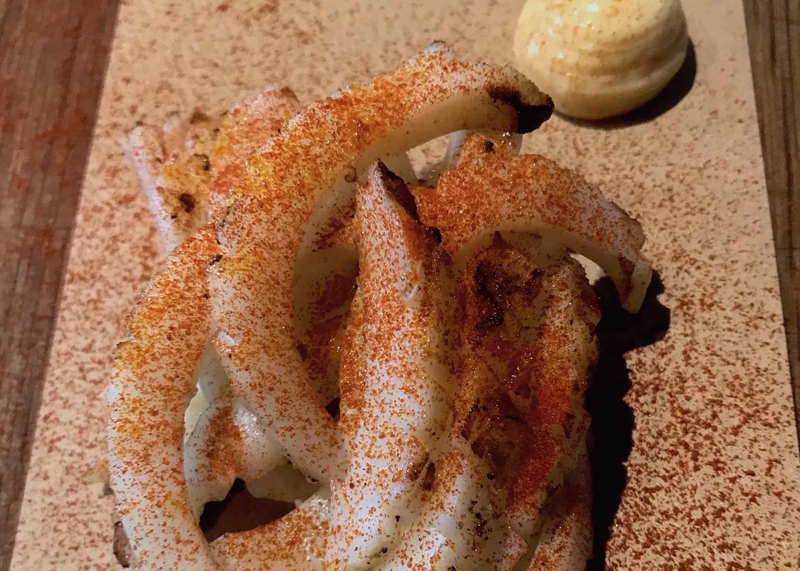 Equally wondrous (to my eyes) is the restaurant complex a five minute walk away from St Mary’s in the old General Hospital, now being developed into flats on the Bathurst Basin, where after lunch we caught a ferry to Temple Meads and our train North. And what a lunch. The presence of Captain Smidge meant we couldn’t book in Michelin-starred Casamia, one of the UK’s finest restaurants and we passed on the pizza place also owned by chef/patron Peter Sanchez-Iglesias in favour of his third venture in the row, Paco Tapas, which itself garnered a Star within months of opening. It is the best Spanish food I’ve ever eaten in the UK and that’s against competition from London’s Sabor, Barrafina and Pizzarro. Great fish, great sherries and warm, informed service that stretched to making a small, ginger dog very welcome.

Factor in Hotel du Vin’s own besotted hosting and this was one of our best ever dog-friendly holidays.

For a newcomer to the city a good way to get their bearings is to go on one of Bristol Insight’s circular hop on, hop off, open top bus tours, which depart from outside the Radisson Hotel