Safety concerns raised over the original site of Tithebarn Street

Will Liverpool's annual LGBTQ Pride festival ever find a regular home? Pride in Liverpool is back at the Pier Head this year after organisers were informed that city centre roadworks will make the original planned site "not safe or viable."

"We are sure that Pride In Liverpool at Pier Head will be worth the wait."

Pride in Liverpool 2022 returns on Saturday 30 July after a two-year hiatus. The event last took place in 2019 when the main hub of entertainment was focused around Tithebarn Street near the city's Pride Quarter.

With less than a month to go until the big date, LCR Pride Foundation - the organisation responsible for delivering Pride in Liverpool - has announced that this year’s festival will move from Tithebarn Street to the Pier Head.

The change in location comes due to circumstances which LCR Pride says are beyond its control, after the organisation was informed that roadworks were due to start imminently on Tithebarn Street, meaning the original planned site would not be “not safe or viable” for the event on the day. [sic]

The change in festival site will also alter the route for the city’s annual March with Pride, where members of the LGBT+ community and its allies march through the city’s streets in protest, celebration and solidarity. However, as in previous years, the march will start from St George’s Plateau.

Andi Herring, CEO and co-founder of LCR Pride Foundation said: “While a change in site so late in the planning stages of Pride in Liverpool is never ideal, the safety of those attending and working at the festival is paramount.

“We have a dedicated team of event professionals, suppliers and traders who have been working tirelessly to ensure that we are able to come together at the new site for the celebration that our community deserves and has been eagerly anticipating.

“Despite the change in location the event remains completely free and we are sure that Pride In Liverpool at Pier Head will be worth the wait. We are also continuing to work and support businesses in Liverpool's Pride Quarter and across the city with their plans for the day,  so the whole city can show its support for our LGBT+ community. With LIMF also taking place in the city, we’re expecting a busy weekend!

“We would like to extend our gratitude for the support provided by our sponsors, in particular Barclays, and all of our joint partner agencies, emergency services and city council teams that are assisting with the planning of this year’s event and late notice change to our site.” 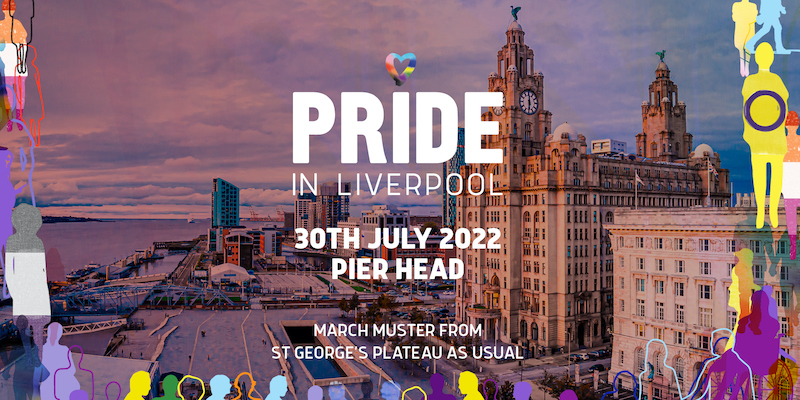 Liverpool’s LGBTQ+ community established the city's first official Pride event in 2010 to commemorate the murder of Michael Causer in 2008. The first festival took place around Dale Street and Stanley Street, an area which is home to many of Liverpool's gay bars and nightclubs. Since 2010, Liverpool's Pride event has taken place in various locations including the Cultural Quarter around St George's Hall and St John's Gardens, Tithebarn Street, and the Pier Head.

LCR Pride Foundation was established in 2019 (rebranding "Liverpool Pride" to "Pride in Liverpool") with the aim of making the Liverpool City Region the most LGBT+ friendly region in the UK.

In June 2021, the Stanley Street gay quarter was rebranded as the Pride Quarter, following in the footsteps of similar initiatives to unite LGBT+ venues, such as Leeds’ Freedom Quarter and the rebranding of Boystown Chicago as “Chicago’s proudest neighbourhood”.

The line-up for Pride in Liverpool at the Pier Head on 30 July 2022 is yet to be announced.

For further updates and to register for March with Pride, visit Pride in Liverpool.

Read next: Top things to do in Merseyside: July 2022

How to spend a day in... William Brown Street
● / Property