CONFUSION after independent shopping and collectors’ market “Quiggins at Grand Central” bins the first part of its name.

The Renshaw Street emporium has long kept the “Quiggins” element of its title, in the shape of several colourful large signs at the front door.

It’s a hark-back to the umbrella name stall-holders operated under for 20 years, when Quiggins was housed across town in School Lane.

Then, the hugely popular clothing and antiques centre was co-owned by Peter Tierney. He would later became an active member of the British National Party - at one point convicted of assault - before giving it all up for a life in the National Front.

Quiggins was controversially demolished in 2007, as part of the Grosvenor development, and many of its traders found new homes at the Renshaw Street hall, a listed building with which Quiggins has no connection. 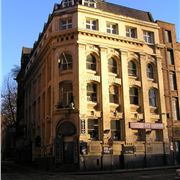 Quiggins in School LaneTierney, who now runs a shop called Quiggins AttiQue elsewhere in the city, came bottom in this year’s Liverpool mayoral election, scraping a measly 566 votes on behalf of the NF.  The ballot paper listed him as Peter "Quiggins" Tierney.

So it was perhaps no surprise this weekend, when a statement appeared on the “Quiggins at Grand Central” Facebook page declaring the store’s intention to finally divorce itself from the association altogether.

"This is an official announcement, as of two weeks time we are losing the ‘Quiggins’ from our name,” read the post. “We are Grand Central and proud to be independent. We have no association with that name or it's (sic) not-so-nice counterparts”.

Customers were also promised “new signs and a new style”.

Big thumbs up all around, you might think, as did the dozens of “fans” who gave the post just that.

Indeed, one stall-holder, who did not wish to be named, welcomed the move, telling a Liverpool Confidential correspondent: "The National Front are nuts, it's good to know we're nothing to do with them."

But, it seems, everyone had got hold of the wrong end of the stick and it was all a case of hue, rather than cry.

This morning, the Facebook statement had been removed, as had the page admin rights of the unnamed tenant who posted it, LC was told.

Yes, the vivid Quiggins signs outside are disappearing, a spokesperson added, but, they insisted, the decision had nothing to do with politics. They hadn’t even heard about the name on the ballot paper and it was more to do with aesthetics. 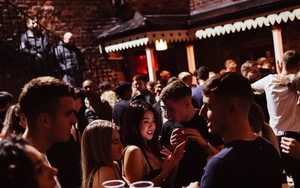