THE plaudits keep rolling in for Delifonseca Dockside - the only place where you can buy a pound of flesh in one bit of the building and and then (theoretically, at least) get them to cook it in another.

The multi-award winning Brunswick Quay restaurant and delicatessen, which houses the Liverpool branch of celebrated Edge & Son butchers among its myriad gastronomic pleasures, has once again been named as a finalist in the national Farm Shop & Deli Awards.

It's the third consecutive year that DD has made an appearance, beating off stiff competition from across the nation to secure a position in the ‘Food Hall of the Year’ category.

The news comes as the docklands operation eyes expansion plans - no, not to Manchester like everyone else - but rather, Confidential understands, at the same address.

Quite what the ETA for that is unclear at this stage, but in the meantime back to the Farm Shop & Deli Awards.

"Following evaluation, deliberation, secret visits and mystery shops by a panel of top industry experts, Delifonseca Dockside will join a number specialists from the independent retail market at the Farm Shop & Deli Show at the NEC, Birmingham on Monday, April 24," it says here.

Candice Fonseca, the boss, said: “To be regarded on a national scale as a result of the panel’s in-depth analysis, which studied our operation, staff’s product knowledge and our commitment to stocking locally sourced products, not only helps to further the recognition of our provision, but it also puts the city of Liverpool on the good food map.

“The news of our shortlist now means that we are we currently up for not just one but two awards, as we were also recently nominated in the ‘Taste’ category in the Liverpool City Region Tourism Awards. With that in mind, 2017 is looking to be a very exciting year indeed.”

The Farm Shop & Deli Awards, now in their fourth year, recognise the best standards in the UK’s independent speciality retail market by celebrating the highest levels of service, product knowledge, initiative, innovation and community involvement offered by "heroes of the high street".

Restaurant no shows – What can we do about it?
● / New Openings Vicky Andrews tells us what do you get, how much it is and how easy... 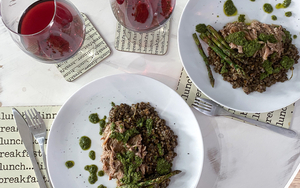