As an out-of-towner, Liverpool’s Hope Street Hotel sounds like my kind of gaff. Bag a room here and, according to the seductive website blurb, guests can enjoy panoramic views across the city from the sumptuous comfort of a rooftop suite.

1931 used to be a Pizza Express, and on this visit the ghost of the Romana looms ghoulishly large

The website also speaks generously of the flourishing food scene to be uncovered in the local area. Right now, fresh-faced visitors may want to take heed of this heads-up.

Due diligence informs me that the hotel’s own newly-opened restaurant, 1931, used to be a Pizza Express, and on this visit the ghost of the Romana looms ghoulishly large.

An applaudable waste-not, want-not approach to kitchen refurbishment means that much of what’s on offer at 1931 generally revolves around what can be shoved into the broad-fronted pizza oven, presumably left in by the previous occupants. It does look like it’d be a bugger to shift.

Subsequently there are enough dough-based dishes being peddled to give me a night-long earworm of Songs of Praise banger, Bread of Heaven.

Of the minimal non-carby offerings, meatballs al forno make for a tight and tepid bowlful (£6.00). Six beefy spheres have been al forno’d for too long, making them tough, but then served oddly lukewarm. These are not like Nonna used to make. Maybe Nonna bought these in from a supplier.

Milky mozzarella with ripe greenhouse tomatoes is a time-old classic (£5.50), but not when the components are as fridge-cold as they are here.

It’s a shame, as there’s just enough flavour left in the tank for both to hint at what we could have won should they have been allowed to be their true room-temperature selves. A smattering of decent pesto lifts things a little.

Both a pizza diavola (£11.95) and a lamb pide - “it’s pronounced bidet”, says our grinning waitress, who to this Yorkshire visitor is Scouse warmth personified - are inoffensive but quickly forgettable.

Neither is terrible, but I’m supremely confident of being able to find better versions elsewhere in the city without having to meander too far.

Perhaps Pizza Express left a load of commercial dough in the fridge. Bases are bland and crusts lack any perky char or chew, while toppings are uniform and polite. For late-night hotel check-ins it is, I suppose, a neat and tidy room service supper option.

Sure, I’d like the lamb to be smooshed into the sauce rather than plonked on top, and for the subtle “sumac spices” to be given a heck more oomph, but the fruity pop of pomegranate does add a frisson of titillation against the savoury mince. Yes, I’m pro ham and pineapple, too.

For a dish that’s meant to dazzle and jolt with freshness and zing, a downbeat tabbouleh brings to mind those nutty pots of penitence occasionally purchased from M&S when one feels virtuous (£3.00).

I never finish those, either. A mixed salad does its leafy thing without fuss, but there are those ruefully frigid tomatoes again (£3.00).

Swerving the Instagram-friendly dessert pizza, (Nutella and Biscoff options both available if you’re wondering,) the meal’s high point comes in the rectangular form of a warm chocolate and orange brownie with milk ice-cream (£6.50).

It’s a simple but effective one-two of hot meeting cold, and an unashamed crowd-pleaser.

As you’d expect from the people behind such a dapper hotel, 1931 is a stylish spot. Of course, there’s a bit of exposed brickwork here and the occasional bare bulb there, but like the service it’s a warm and welcoming space.

The name 1931, by the way, is apparently a nod to the trade routes that once ran through the city. It’s a nice touch, but it might be worth the powers that be fast-forwarding to a more recent history and noting how far the humble pizza has come on over the last few years.

Turn that massive oven up and let it rip. 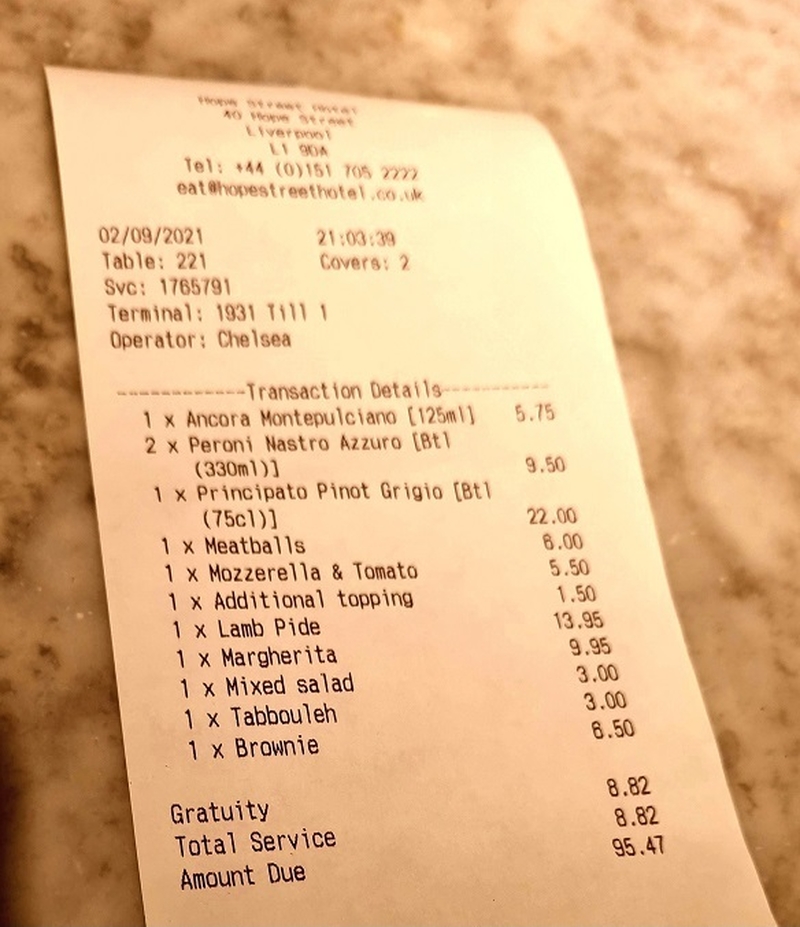