ST IVES, pilchards and troubled waters ahead – our off-season visit to the Cornish St Tropez felt like a weird watershed even at the time. Since when, across the weeks of self-imposed national quarantine, our brief, sequestered stay in the Sail Lofts apartments deep in the old town has glowed with an odd radiance. That’s why we’re so glad to sing this special bolthole’s praises now staycations are back on.

On that fateful day back in March when the Government ordered pubs and restaurants to shut their doors, we had trekked down that eastern approach past the early 19th century, black and white ‘Baulking House’. This is an evocative survivor of the once lucrative Cornish pilchard industry. Today it’s a great vantage point for sunset seekers but in the 19th century it served a practical purpose as a huer’s hut.

A ‘huer’ was a lookout who would scan the bay for approaching pilchard shoals. When he saw one he would raise a hue-and-cry (hence the name) of “Hevva, hevva!”, using a kind of semaphore to guide the fishing boats to the right spot.

Pilchards these days generally fall under our culinary radar. As Mousehole-based cookery writer Lindsey Bareham memorably put it, they are “are really mature sardines and resemble a somewhat shambolic herring.”

But until 100 years ago when stocks plummeted they were a mainstay for local fisherfolk, who salted (baulked) the soft-fleshed catch for export by the barrel load. Those they kept went into Stargazey pie, featuring baked pilchards poking their heads skywards out of a star-shaped shortcrust pastry lid. Can’t see a dish like that weaning today’s visiting ‘grockles’ off the pasties that are a major cottage industry in the shops along Fore Street and Wharf Street.

Unaware of impending lockdown, we had dropped in to book an early evening meal at Porthminster Beach Cafe between the Baulking House and the harbour. The sweeping Blue Flag sands of Porthminster are only scenically rivalled on this stretch of coast by Carbis Bay and the temptation was to linger but a further pilchard siren called before dinner. The Pilchard Press is a cosy craft beer bar set back from the quayside – a hip alternative to the trad St Austell Brewery pubs that pull rank hereabouts, notably the waterfront Sloop Inn, which dates back to 1312 (though the current incarnation is probably 17th century).

Its tiny rival’s name stems from an offshoot of the pilchard packing industry. Each hogshead containing up to 3,000 fish would also yield eight gallons of oil to fuel lamps. Many of the pressing stones used still get unearthed during building works (seek them out and much else in the fascinating St Ives Museu). On that Friday, March 20, our liquid of choice in the Press was a hoppy, bitter Graffiti IPA from Firebrand Brewers in Launceston.

All very jolly with couples keeping their distance against a backdrop of pilchard-centric murals. Then the radio delivered the bombshell news – shut up shop; the only plus a large carton of free beer for us as we abandoned ship. 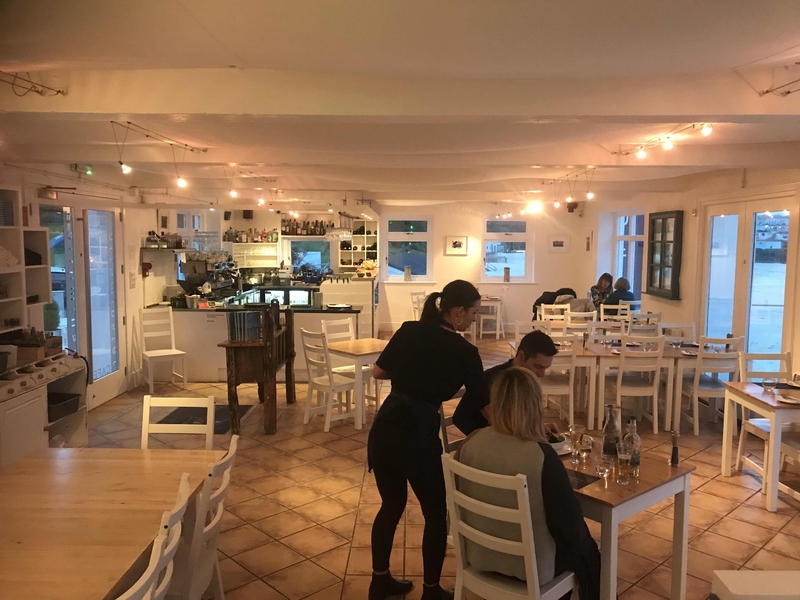 The Porthminster Beach Cafe can be hugely recommended. The only other fish we were going to get during our visit was a takeaway from Harbour Fish & Chips, which shares a similar ‘locally caught’ sustainable ethos. This decidedly posh chippy even sells wine by the bottle but it’s not a patch on the list at the Beach Cafe. We shared a sunset bottle of Grosset Polish Hill Riesling from South Australia and the view could so easily have been one of an Adelaide surf beach.

The Cafe’s seafood-centred menu also had an appropriate touch of Pacific Rim about it – native whitebait and baked hake jostling with a coconut and tamarind rich prawn curry and the fragrant Indonesian rice dish Nasi Goreng. The marquee extension is the dog-friendly part of this stylish restaurant. Catching the mood of this final evening before lockdown we self-isolated at the far end with our chihuahua, Captain Smidge. 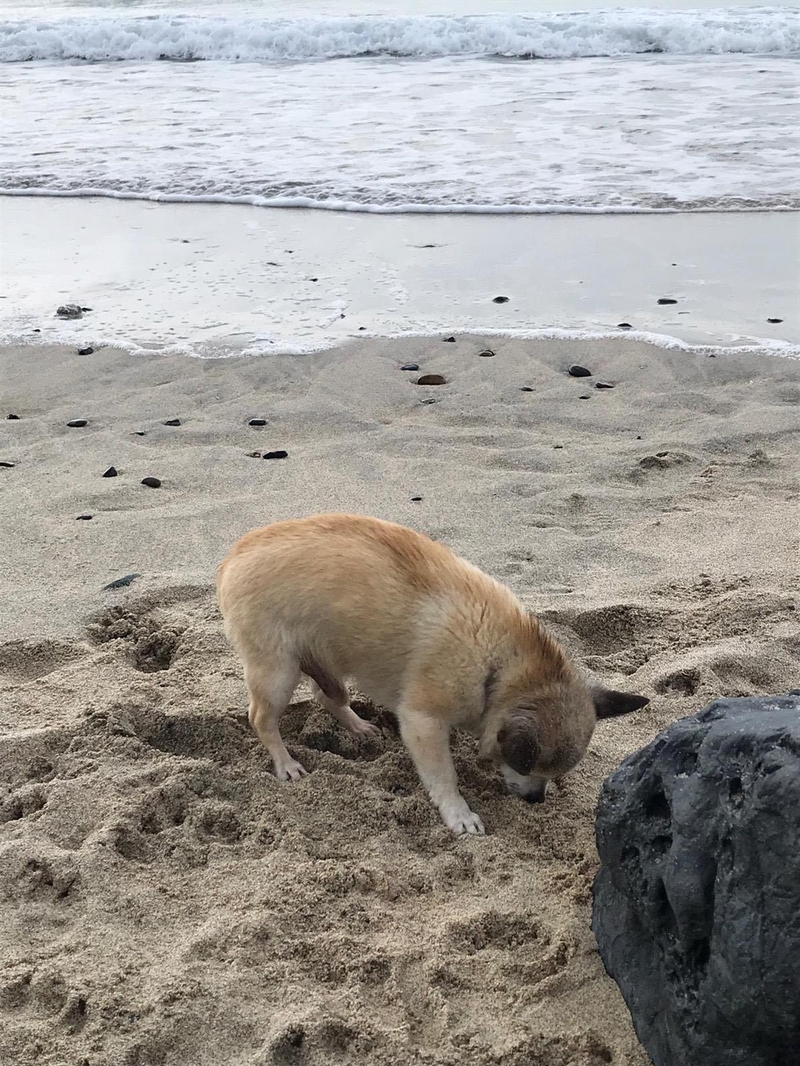 St Ives’ own designated surfing strand is actually Porthmeor Beach on the other side of the harbour and the jutting headland known as The Island. Porthmeor is also well-known for playing host to Tate St Ives, primarily exhibiting works by the many 20th century British artists who flocked to the town with its uncommonly fine light. A £20m new extension that opened three years ago doubled the exhibition space. It was created after over a decade of burrowing into the granite cliff.

In complete contrast is the evocative legacy of one of those world famous artists who made their home here. Yorkshire-born sculptor Barbara Hepworth first came to live in Cornwall with her husband, the painter Ben Nicholson, and their children at the outbreak of war in 1939.

She lived and worked in Trewyn studios – now the Barbara Hepworth Museum – from 1949 until she perished in an accidental fire there in 1975. Five years later it was given to the nation under the stewardship of The Tate. From the steep street outside the house doesn’t stand out but the jewel in its crown is its walled garden, where Hepworth herself carefully placed the signature works that remain to this day.

Our own base, a 10 minute walk away, also didn’t reveal its glories until we were inside. The five-star Sail Lofts complex of 12 apartments (four of which are dog-friendly) is just seconds from Porthmeor Beach. It is set around a sub-tropical courtyard; ‘Zennor’ our apartment, a two-bedroom dog-friendly affair, was accessed directly off a backstreet called The Rope Walk. We quickly dropped off our luggage, resisted breaking into the welcome hamper, and drove the car along the Porthmeor front past Tate St Ives to Sail Lofts’ own private car park, a massive boon in a cramped town where parking is at a premium.

This is even more so post lockdown with stringent traffic bans in place to promote social distancing, which can be difficult. Some streets in the town centre are closed to non-essential vehicles from 11am-4pm every day until further notice.

Multi-award-winning Sail Lofts was created in 2007 from buildings originally used to store fishermen's nets and dry sails before becoming one of the largest pilchard yards in St Ives. The biggest property boasts four bedrooms and all are serviced by an in-house concierge to reduce visitor stress. They’ll order and deliver locally sourced fresh fish and meat, recommend and book eating-out places and help you plan days out. One-to-one yoga session and spa treatments can also be booked through the concierge.

The Sail Lofts package also includes complimentary access to Tate St Ives and the Hepworth Museum while the mega-luxurious apartments themselves are home to an impressive collection of contemporary artworks.

Still the landscapes and seascapes on the doorstep are the prime reason to visit St Ives. Go out of season, take your sturdy walking boots and you might well have some of that beauty to yourself. The six-mile clifftop trek along the cliffs to Zennor in the Land’s End direction is a calf-strainer but the rewards are many. It being early spring, dog violet, and squill carpeted the rugged grasslands and its coves were thronged with seabirds. If you are very lucky you might even spot a seal.

Zennor, seemingly hewn out of the native granite, was home during the Great War to DH Lawrence, who used it as a setting for Women In Love. Hostile locals reported the author and his German wife Frieda as potential spies.

Refreshed at the village’s Tinners Arms, you can either get the bus back to St Ives or, better still take the inland track back. It is known as the ‘Coffin Path’ because before the tarmac road was built that was the route funeral processions took to Zennor’s Norman Church, St Sennara. The shadow of mortality has always been with us. Let’s hope for brighter times ahead in arguably the most beautiful corner of England. 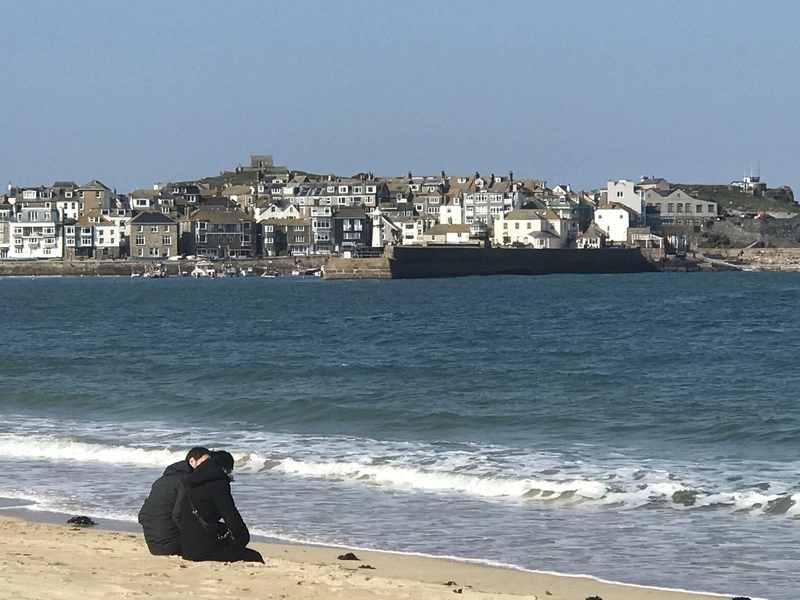 Sail Lofts, 7 Porthmeor Rd, Saint Ives TR26 1GB. 01736 799175. Visit the Sail Lofts website for any remaining summer slots (there may have been cancellations). Winter prices start from £499 for a 7-night break. The complex is following all government guidelines (and more) in terms of cleaning protocols and each property will be subject to a two-stage clean, one of which is a disinfectant clean using products that conform to EN14476 standards.

Four of the apartments are dog-friendly. Dogs should not be left alone at any time but Sail Lofts do offer a dog-sitting service if you plan a night-out at a non-pet-friendly establishment. Check out Visit Cornwall’s ‘dog-friendly’ guide via this link. Note that on the three main St Ives beaches dogs are only allowed off-season. For a full guide to the region's attractions check out the official site, Visit Cornwall.

St Ives is 350 miles from Manchester. With a rail journey with changes taking over nine hour it is impractical to take dog with you by train. A six to seven hour car journey via the M6, M5 and A30 does allow comfort stops for your pooch.

Please check with individual websites to see which restaurants, bars and attractions mentioned are operating again, within designated guidelines. Tate St Ives is aiming for a July 27 re-opening.