Riddle me this: for all of the quaint niceties that Saltaire possesses - and who doesn’t love a big old artsy mill at the bottom of a cobbled street - how come there’s such a dearth of places to get a decent feed?

On the other hand, Saltaire's Don't Tell Titus left us in a grump, and The Terrace was equally disappointing so you’d be forgiven for expecting something, well, better.

The recent arrival of Rumpus, up there on the main road, will help to redress the balance.

Burgers: The Bonkers Years doesn’t seem all that long ago. Wince hard enough and you may remember such atrocities as strawberries on your beef, popping candy on your fries and side-splitting names like “The Triple Heart Bypass Burger”. Hilarious, wasn’t it? Mercifully, nothing’s too daft or too dude-food at Rumpus.

The Classic, for example, keeps things invitingly old-school (£8.50). A thick disk of husky cow, liberally seasoned, had been seared hard and fast until just the right hue of murky bronze. It may not have been as pink on the inside as promised on the menu but, loose and juicy as it was, you wouldn’t notice if you didn’t look. Draped over this, in a perfectly lurid shade of orange, a layer of tacky cheese was just melting into the patty. Two becoming one, as the Spice Girls angelically trilled back in the day.

Experts in the field will earnestly tell you that the vessel used to transport the meaty heap from tray to mouth is as important as the cargo within. Well, burger nerds, the bread bun here’s a beauty. It’s just a brioche, I’m later told, but I looked deeper within and found resolve, integrity, and quite a nice char.

In addition to the permanent fixtures, which are mostly riffs on beef with a couple of chicken options and a falafel chucked in, Rumpus will be sticking the occasional limited-edition special on the menu, too. It’s here where mavericks can go off-road. With its buttermilk fried halloumi, its mozzarella sticks and, yes, that’s a brie sauce, the Cheeseburger (£11.90) could not be accused of lacking commitment to the cheesy cause. But, surprisingly balanced due to the sharpening addition of pomegranate ketchup, and full of contrasting textures, it was not the claggy mess it threatened to be. It worked

With no starters or desserts to go at, it’s a menu that doesn’t linger. Fries, therefore, take a starring role, and the plentiful pile of standard-issue spud included with all burgers should have purists rejoicing. Crisp, salty and with a dusting of mysterious spice about them, these were no afterthought to the meaty main event. Here was Rumpus quietly smashing the basics, again.

That said, if anybody can ask for a portion of “Funky Fries” (a £2.80 add-on) without cringing then they’ve got far more front than me. Slithers of pepper and onions, a drenching of cheese sauce and bacon bits scattered over the top made the squirm-inducing request just about worth it, but next time I will just point at the menu.

Like the vaguely ranch-ish interior, and the muted arrival of the restaurant itself, the drinks offer is appealingly understated. Including a couple of beers from local stalwart, Saltaire Brewery is a nice touch but our crisp Flensburger pilsners (£3.75 each) were a sound selection to swig with the hefty scran.

This new outpost is the second Rumpus site, the original located in deepest Slaithwaite. Aptly, it is based in what was once a popular butcher’s shop, and there is talk on the website of pedigrees and provenance should you want to swot up on the backstory of your beef.

The locals are on board. My request to push this reservation back by an hour had been politely declined due to the place being fully booked. Pesky customers, eh? This surely bodes well. A solid burger joint may not change the world but Rumpus is a step in the right direction. 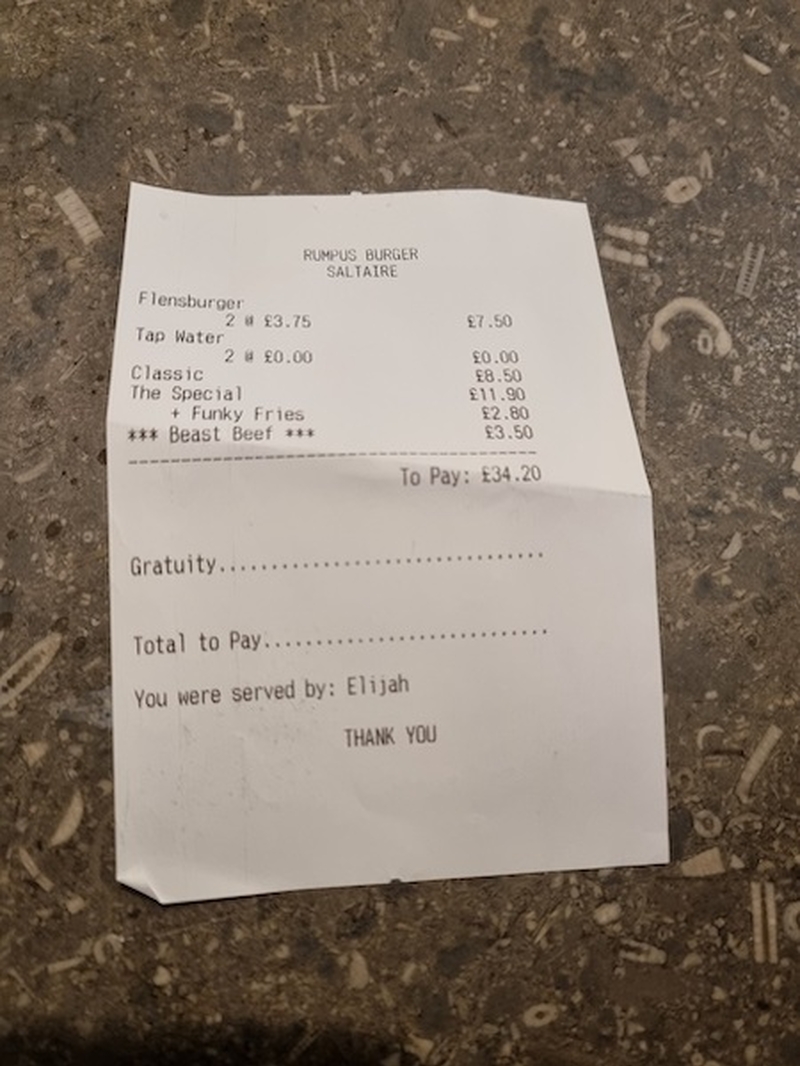