THE last time I encountered Sigur Rós they were conga-ing across the main stage at Latitude Festival, Jónsi’s ethereal falsetto piercing the Suffolk night – like Björk’s love child discovering his inner elf. Now the eclectic Icelandic band are the soundtrack to my ‘Nordic taco’ opener, served in a suitably minimalist environment on a night so cold even glaciers wouldn’t be cracking.

Most of everything at Nordic seems to stem from the couple’s own endeavours. Foraging, fermenting, fussing about raw materials

A copy of Rene Redzepi’s great grey Noma cookbook is stranded like an errant narwhal on a shelf next to the Aalborg Taffel Akvavit. Greta Thunberg’s own tiny eco tome squats on the windowsill behind our blond table. This is Nordish, Northern Lights on a plate, a daring arrival on the tamer shores of the River Aire. I always associate Saltaire with California sunshine, courtesy of David Hockney’s shimmering azure pool scenes. Salts Mill, commercial centrepiece of the World Heritage site, has long played host to the Bradford exile’s work, and who could resist taking home a nice Bigger Splash fridge magnet?

Nordish is just across the railway bridge from the Mill. It occupies a corner site once home to community cafes such as the Vicar’s Cafe Bistro and Saltaire Canteen. Check out its social media and you’ll find it accommodates activities as diverse as arm-knitting, wreath-making and life-drawing classes. Obviously not during service.

So far, so homegrown hygge, especially as daytime during the three days it opens it serves cakes too (see the coffee custard tart in our Best things to eat December) plus Kanelbullar (cinammon buns), naturally, for the ‘fika’ coffee and cake ritual. But that wouldn’t drive me to divert off the A65. It’s the siren call of Instagram – a series of shots featuring smoked wood pigeon, beetroot salmon gravadlax and Jersey Royal smørrebrøds – that has cast a hypnotic spell.

On the plate, the magic is more muted. Mostly less pretty; thankfully the flavours are clear and strong. It’s the first day back after a break in Denmark and Norway (where else?) for co-owners Sam Leach and Bethan O’Reilly. Facebook tells me he proposed to her in a forest, crafting an engagement ring out of a sprig of heather. She said yes.

You’d expect a degree of distraction then, but it does concentrate your mind when the entire operation is the two of you plus a server. It’s a far cry from when Sam worked in the Simon Rogan brigade, getting smitten by Scandinavian cuisine along the way. Hence the brave step to create tiny 20-cover Nordish. Norwegian plus Swedish? Or just a way of saying the influence is Nordic tempered by our own Northern English raw materials?

So to those Nordic tacos (£2.50 each). They’re a delicate, delightful creation, filling a thin flap of celeriac with apple, ‘cured yolk’ and nasturtium. We’ve already wolfed a mini spelt sourdough loaf (£4) with butter as smoky as a new campfire, our disappointment at the Kernel Pale Ale not having been delivered assuaged by the rustic charms of a low intervention Nero d’Avola. This Baglio Rosso from Sicily (a very gentle mark-up at just under £20) was supplied by natural specialists Wayward Wines – from Leeds, as are coffee providers North Star. Cheese is from benchmark Courtyard Dairy at Austwick.

Otherwise, most of everything at Nordic seems to stem from the couple’s own endeavours. Foraging, fermenting, fussing about raw materials. I’m sure they make their own butter before smoking it, and it reappears in a soothing bowl of stewed leeks with mustard and parsley (£7). Stronger flavours follow with a mushroom smørrebrød topped with Ogleshield cheese, Somerset’s Jersey cream answer to Raclette. Extra oomph comes from a rich mushroom cream and pickled walnuts (£9).

Open sandwich is a recurring theme. Icelandic rye flatbread flatkökur forms the base for the one meat dish: rhubarb glazed ox cheeks with red cabbage (£10). It wasn’t as tangy as I’d hoped, the cheeks, oddly flabby, teetering on blandness. I longed for a little variation. There’s a social media shot of Sam, cradling a huge fish skeleton, to be roasted for soup. I craved fish.

Still, redemption came in the form of the single dessert on the evening menu. A crisp, intense chocolate tart under a bubble of milkiness, dotted with liquorice salt and what seemed to be dehydrated beetroot. It was a divine seven quid’s worth. And so very Instagrammable at last.

Considering the Danelaw once engulfed Yorkshire, it’s hard to read the runes on how a Scandinavian restaurant will fare. I was not alone in being hugely enthused by Norse in Harrogate but lack of bums on seats eventually forced its closure – even after the owners on high-profile bended knee begged punters to back them. A high town centre rent might also have contributed to scuppering Norse’s ambitions. Victoria Road, Saltaire, is a humbler base for Nordish, and Sam and Bethan are keeping it deceptively simple, working from a ‘coffee shop’ base while filtering in the savouries. Behind it all is a keen culinary sensibility ready to flourish. As they say in the forest – ‘From little acorns…’ 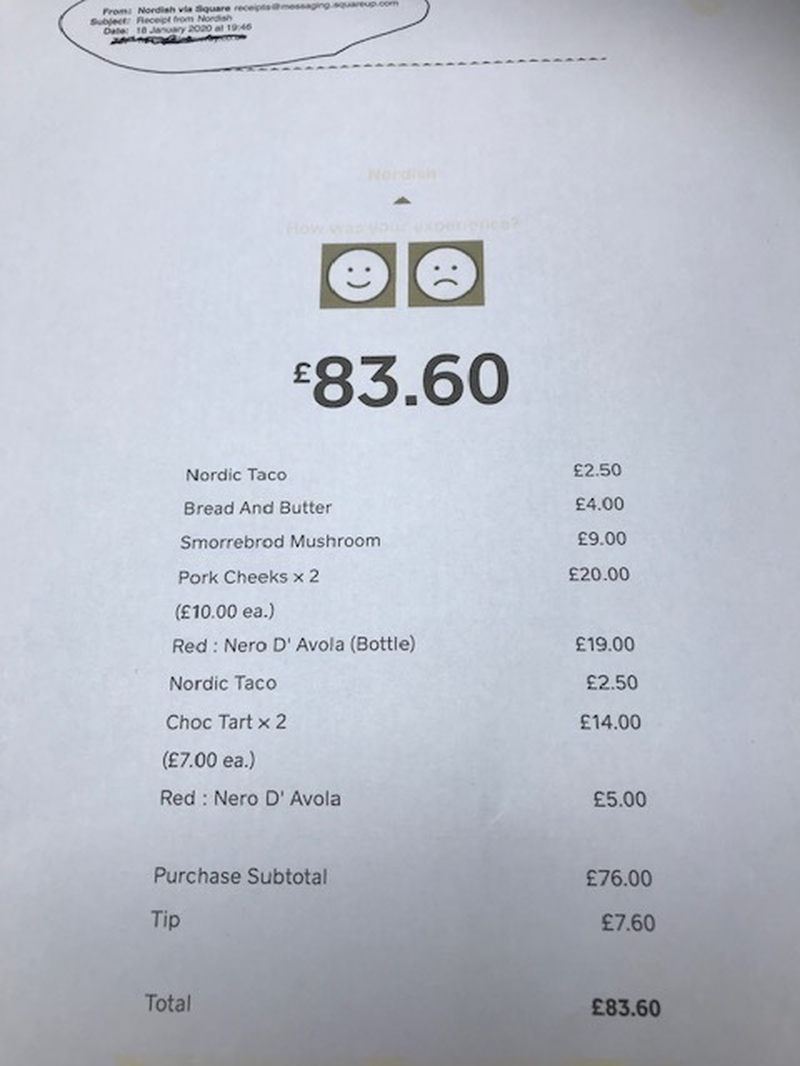