Back To Reviews
● / French

If this is what Parisian dining is like, Richard Miller won’t be booking on Eurostar anytime soon

I’VE never been to the French capital, to be honest, but I’m pretty sure its inhabitants might be a bit miffed if they knew there was a place in Blighty knocking out the kinds of substandard stuff we necked at The Terrace in Saltaire and calling it ‘a taste of Paris’.

Compact café by day, bustling bistro by night, The Terrace has been around a good while and, going on tonight’s turn-out, certainly has its local acolytes. Indeed, it’s early doors when we land but downstairs is already packed so it’s up a flight for us, where a blackboard menu speaks enticingly of chunky fish soup, pissaladière and, erm, the Mexican staple huevos rancheros.

I don’t know about you, but I quite like my scallops to have about them a whiff of the sea, salty and fresh, as a reminder from whence they came. Unfortunately, the only reminder of the big blue in the over-baked plateful of the Pétoncles de Reine starter (£8.25) was the sandy grit I crunched into with each jarring mouthful. It’s rare that the words too much melted cheese spew from my lips, but tonight they did; the adornment of Gruyère wiping out any lingering hope that remained of tasting some actual scallop.

Also from ‘Les Entrées’, some so-so snails (for the oddly priced £6.99) were tight as chuff both in texture and on the garlic. I wanted to smell these before I saw them, but there was very little of the heady allium hum knocking about.

The best parts of a mountainous cassoulet (£15.99) were the burnt bits scattered over the top. Beneath them, a pile of dry haricot beans with a handful of smoked sausage chunks dotted about did not a cassoulet make. All decent enough for a few bites but soon it became a chore to scoff. I spied one piece of the advertised belly pork – in reality a flabby piece of pancetta – and called it a day.

Think of Boeuf Bourguignon (here, £15.99) and the brain conjures up images of long-reduced sauces, rich and deeply flavoured with wine, and fibrous, falling-apart meat. Well, it used to. From now on mine will be minded of tough beef, thin sauce and disappointment. The mealy-mashed spud, looking suspiciously smooth and pearly white, didn’t do it either, and my arteries were left wondering what happened to the cream and butter that they were looking forward to.

Crème brûlée, cherry clafoutis or dark chocolate mousse could have been the finest interpretations of those classic desserts to be had this side of the English Channel, but we didn’t hang about to find out.

It might’ve been a different story had the same enthusiasm that’s been put into kitting the place out also been put into the cooking. I liked the faux-French décor. The red-checked tablecloths and bric-a-brac laden walls make for a cosy, charming feel that’s just the right side of kitsch. Hearing the Marseillaise blaring out from the speakers was a step too far though, and I half expected Edith from Allo Allo to pop out and burst into song, or Officer Crabtree to call in as he was “just pissing by”.

The welcome at The Terrace was genuinely warm and the team out front on good form throughout. The cassoulet was knocked off the bill at their insistence. Kitchen just having an off-night? Maybe so. The place was, after all, rammed; something that can’t be balked at in these tough times, so perhaps I should just shut up and embrace my very deep-rooted joie de vivre. But, call me old-school – if I’m exchanging my hard-earned I’d like to get your well-cooked in return, no matter how good l’ambiance might be.

The real low point from my visit, though, was that I officially become one of those idiots I thought only existed within the dystopian realms of TripAdvisor. You know the fella – him who goes out for tea but leaves the restaurant feeling so empty of stomach that he 'had to order a pizza when I got home.' Nope, nobody came out of tonight looking good. 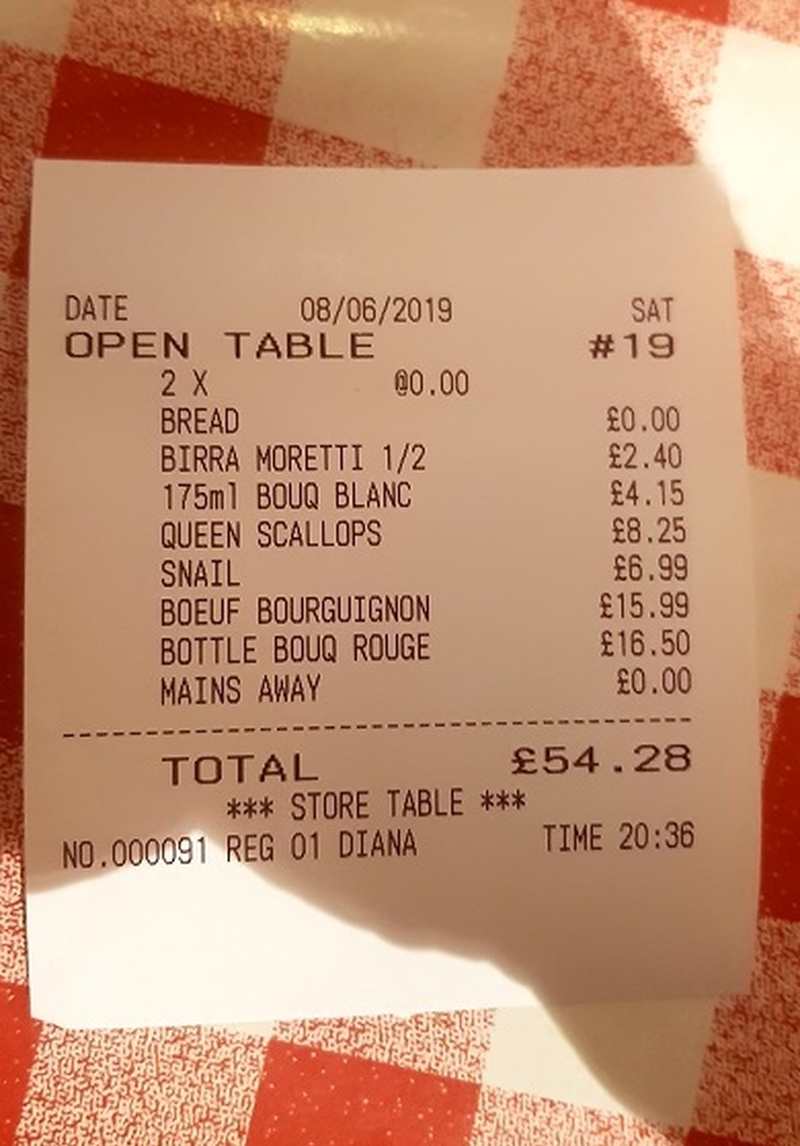