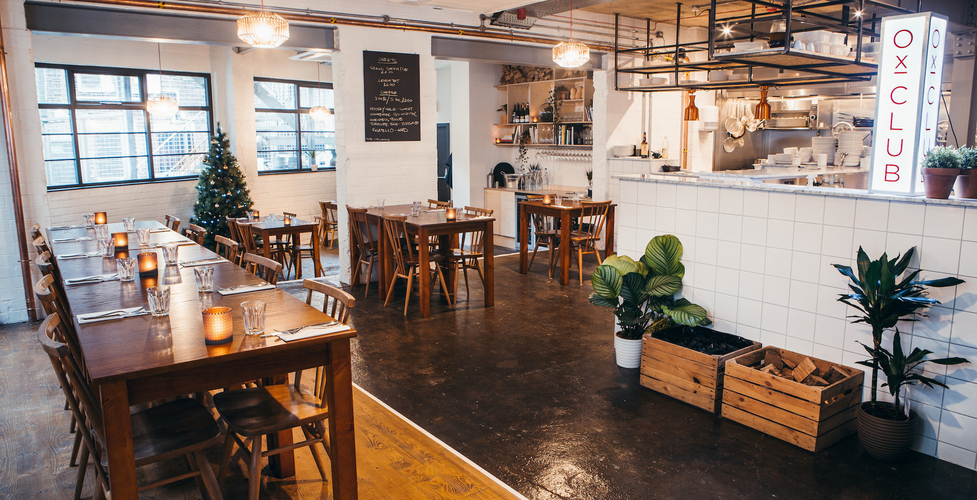 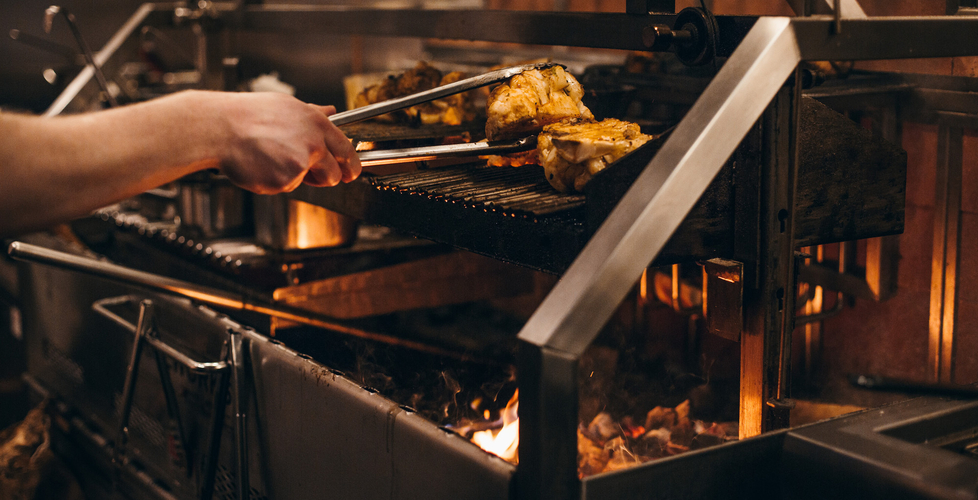 "An open kitchen, in every sense of the word"

After the unusual misfortune of visiting two duff restaurants on the bounce (exhibits a & b), this week I was determined to review somewhere whose praises I could sing.

No, for this week I needed to indulge my inner optimist, and cleanse myself of negativity. And nothing cleanses quite like fire.

Originally billed a “contemporary grill restaurant”, you'd be forgiven for dismissing Ox Club as - pardon my use of the much maligned ‘H’ word - a Hipster Harvester, all trendy white-painted brick, theatrical open kitchen, and a modular menu encouraging you to build your own meal through a combination of small plates, larger dishes from the grill, and sides.

Its signature dish was the fashionable flat iron steak, a cheap cut that, in the right hands, can go pound-for-pound with rump or even sirloin, served with bearnaise and an addictive salsa verde. Or that was the plan, anyway. What really set the town abuzz was a side dish, though. A vegetable side dish, at that.

The defining trait of the food is that most of it is cooked on a giant, solid-fuel grill - the bellows that literally fires the restaurant.

If the restaurant is The Beatles, this grill is George Martin; if the food is Annie Hall, the grill is New York City; if the chefs are Kylie, Kendall, Kourtney, Khloe and Kim, the grill is Kris. You get the idea: its presence and influence is unmistakable, but it never forces itself front and centre. 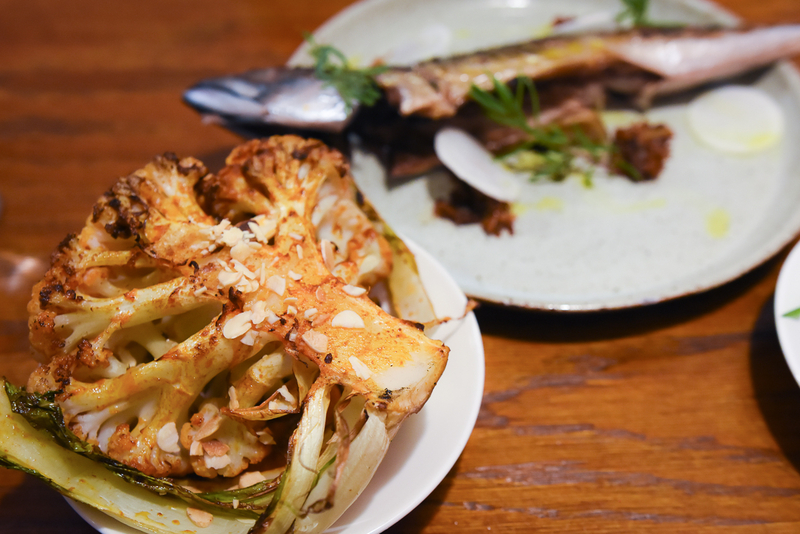 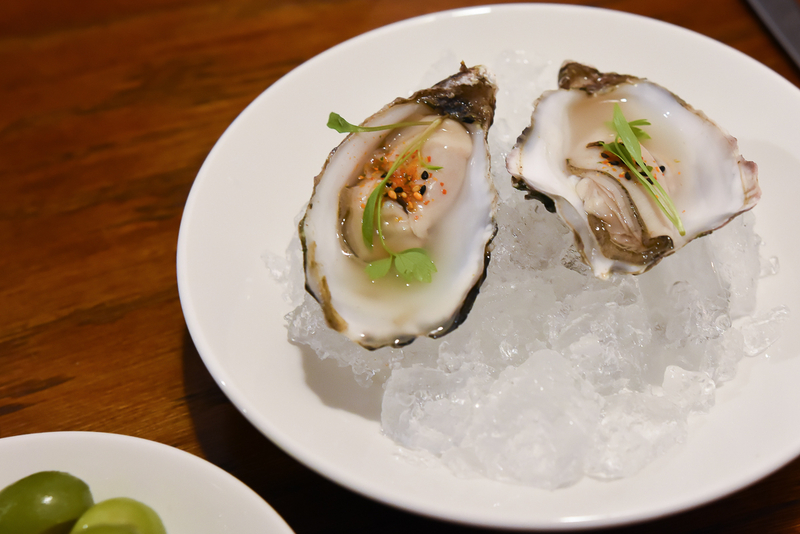 That presence manifests itself in the plumes of smoke absorbed by the tightly-bunched capillaries of cauliflower (£4), it’s daubed in a romesco sauce, the red peppers that form its base haven’t escaped the grills embrace; not so much delicately licked by the flames as subjected to the kind of enthusiastic snog elicited by Craig David songs on school disco dancefloors.

Some of the small plates aren’t shown the grill at all; Olives (£4) are the only ones in the city that challenge Iberica’s for their crown. Yeah, it’s only olives, but if a kitchen is this obsessive over olives then it bodes well for everything else.

Oysters are served raw (£2.8/each) via Japan, with a light, fruity white soy and shichimi - a seasoning of dried peppers, sesame and citrus - replacing lemon and tobasco, drawing from chef Ben Iley’s ten years cooking in Japan, and paying homage to street food sibling Fu-Schnikens. 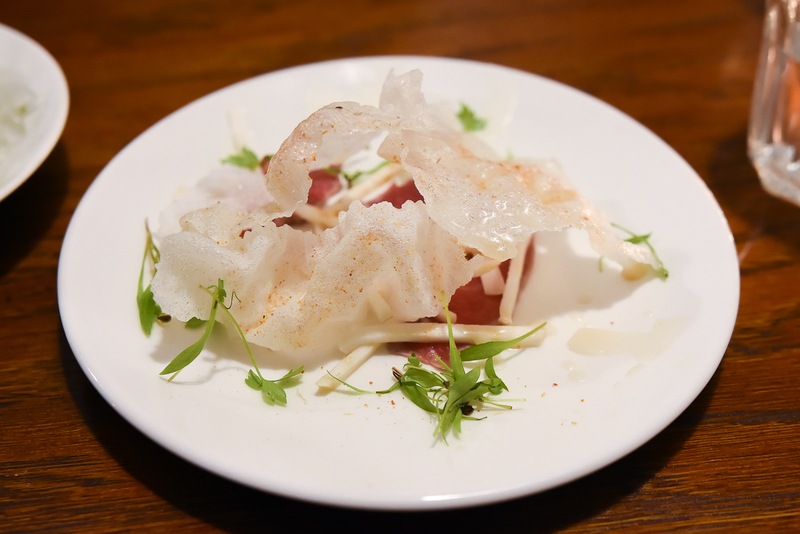 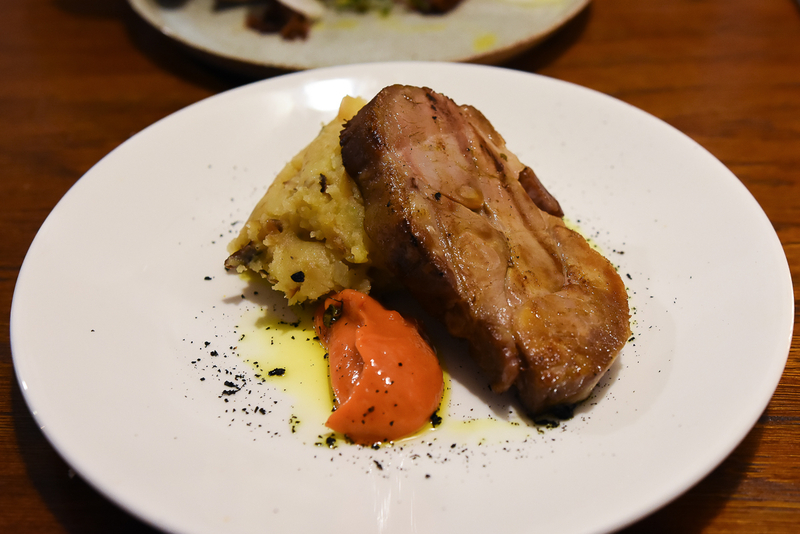 Frills of lamb carpaccio (£7) have their sweetness complimented by scallop skips - waves of rice crackers flavoured with the shellfish, like a bougie prawn cracker. Flecked salaciously with smoked lamb dripping which turns translucent white as it sets, it’s the type of dish that’d impress in hauty fine dining restaurant.

Pork neck (£15) is as conventional as it comes in that it’s just a chop and mash - but what a chop and mash, tarted up with rhubarb ketchup; the potato given the barbecue treatment, overcoming you with the smells of a just-blown-out Mashed Potato Yankee Candle.

A bit of rough-and-ready refinement comes from a whole mackerel (£14) hanging off both sides of the plate like a cartoon hotdog out of the bun. Its silver jacket is scored and scorched and gnarled by the open flame with yielding flesh underneath. Discs of pickled mooli do well to combat the oily fish, but mounds of xo sauce spiked with ‘nduja sausage which - admirable in its ambition - skimps a bit on the depth and spice. 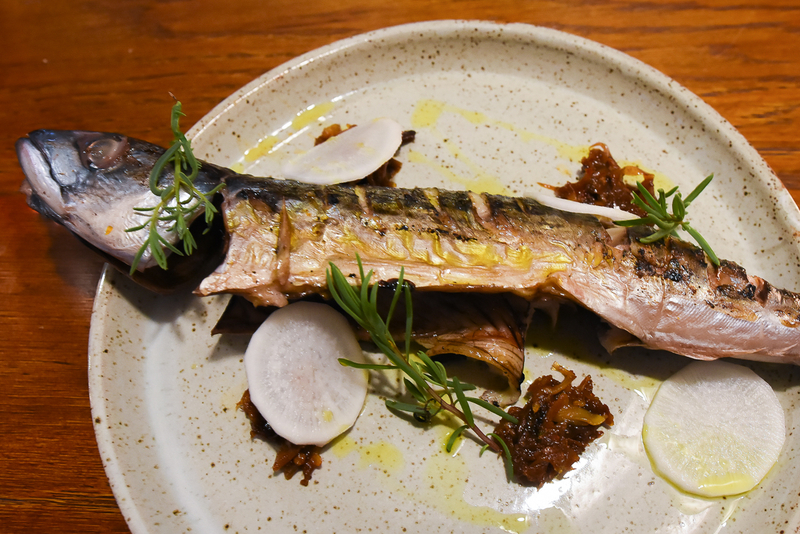 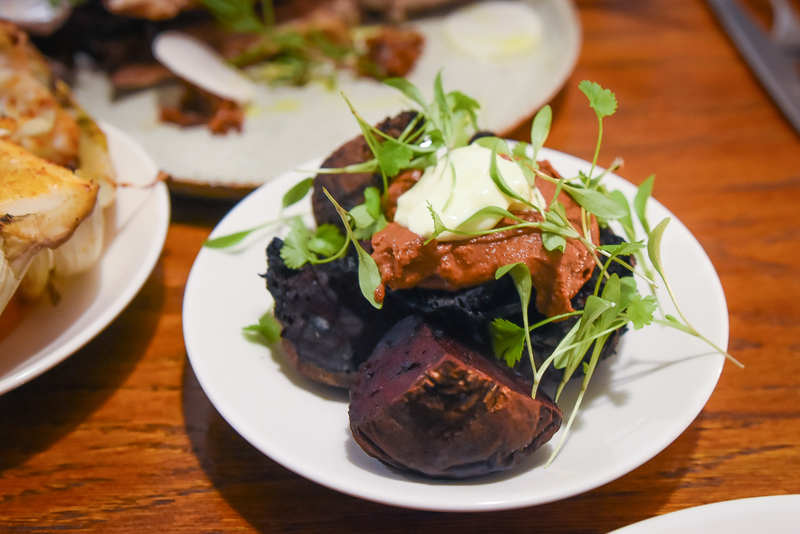 Elsewhere turnips (£4) mingle with hot coals until tender and bashable, then get tossed around in a highland fling of whiskey, honey butter and salt infused with piney spruce needles. A stint in the smoker turns beetroot (£4) into hunks of scorched earth the colour of a ragged cricket ball and brings out a gamey, irony flavour - great as it is, it’d risk being a little one-note if it weren’t for imaginative chefs livening it up with a unique take on Mexican mole, and tart cultured cream.

That’s where the “contemporary” part of that epithet really comes from: not the interior design or the selection of natural wine, but from a kitchen that doesn’t oblige to the conventions of its peers - “post-grill”, if you like.

There are only a handful of restaurants in Leeds that seem to look outside of the city, but with Ox Club you get the clear impression that inspirations and aspirations aren’t being confined - this is an open kitchen in every sense of the word.