The Ultimate Liverpool Christmas (or any time) Pub Crawl

Twelve great Liverpool pubs, a load of beer and heaps of seasonal cheer

If there’s one thing anyone will tell you about Liverpool, it’s that it’s not short of damn good pubs. In fact, with so many to choose from, we’d forgive you for having a little trouble working out which route to take on a pub crawl. Seeing that many people consider the Christmas pub crawl to be one of the festive season’s most solemn and time-honoured traditions (yes they do, don’t argue), there’s just no sense risking a disaster by going in unprepared.

Lucky for you, we’ve got this roadmap guide to The Ultimate Liverpool Chrimbo Crawl. It’ll take you from the city centre, through the Georgian Quarter, across the Baltic Triangle and back into town – and show off some of the city’s best drinking spots along the way. Merry Christmas. 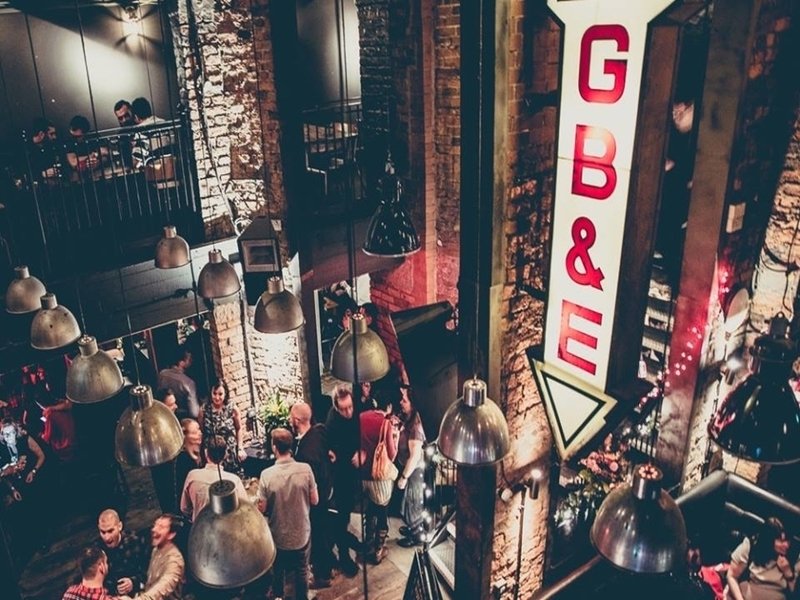 Let’s start in town. Working under the assumption that this pub crawl’s endgame doesn’t involve being violently ill into the Mersey at 4am, we’re going to guess you want to get some grub before you begin. Luckily, Slater Street's Shipping Forecast has got a cracking Christmas menu going right now, mostly comprising of a selection of festive-themed burgers. By far the best of these is the Fat Santa: a beef burger with pulled pork, cranberry sauce, pigs in blanket, Monterey Jack and dipping gravy. Eat that, load up on festive fries, drink something fizzy and see if you can convince a mate to carry you down the road to the next pub.15 Slater St, Liverpool L1 4BW

Over on Roscoe Street you’ll find the Grapes, one of the Georgian Quarter’s hipper drinking holes - and that’s saying something. Aside from being warm, friendly and thoroughly unpretentious (always good), they also tend to put on some decent live music (particularly good right after a hefty burger and just before a night of heavy drinking). If someone’s playing jazz, see if you can convince them to knock out a sax rendition of ‘Last Christmas’. If not, just settle in with a pint of ale. God knows they’ve got plenty. 60 Roscoe St, Liverpool L1 9DW 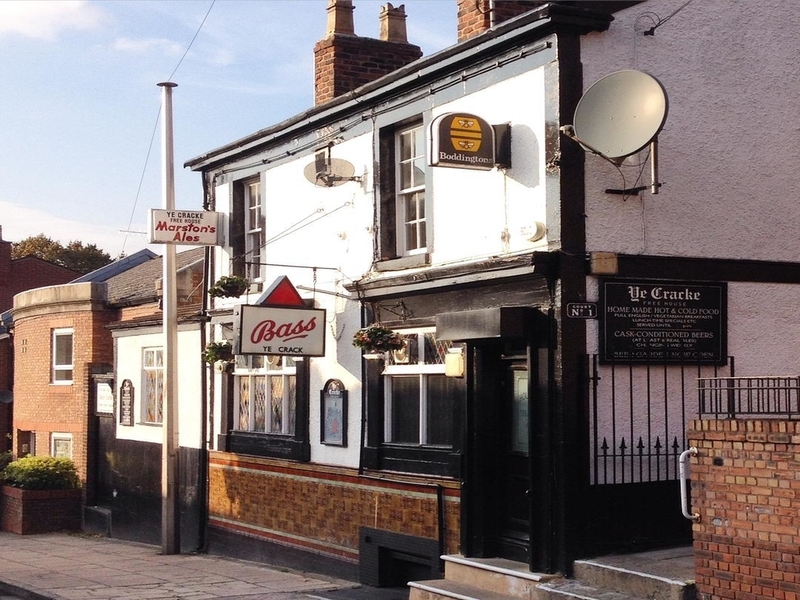 Ye Cracke might not have all the bells and whistles of some of the city centre's plusher pubs, but it has got one thing in droves: history. Probably the main point of pride for this old-schoolest of old-school establishments is the fact that some local fella called John Lennon used to frequent the place with his then-girlfriend Cynthia. As it is, this little claim to fame should make Ye Cracke a good stop on the crawl if you’re making it with any friends or family who are visiting for Christmas.13 Rice St, Liverpool L1 9BB

Only a minute’s walk away from Ye Cracke, the Roscoe Head is a snug little pub with oodles of charm and bragging rights to boot - it being one of five pubs in the whole country to have ever appeared in every single edition of the CAMRA Good Beer Guide since it began in 1974. And that's a well-deserved accolade, too, since the Roscoe Head has some damn good beers behind that little bar, most of which can be tried together in third-pint tasters. That, of course, is a bonus in itself, because at this point you’ll be a few beers in - but should still be entirely capable of holding a conversation about hops and tasting notes and stuff like that. 24 Roscoe St, Liverpool L1 2SX 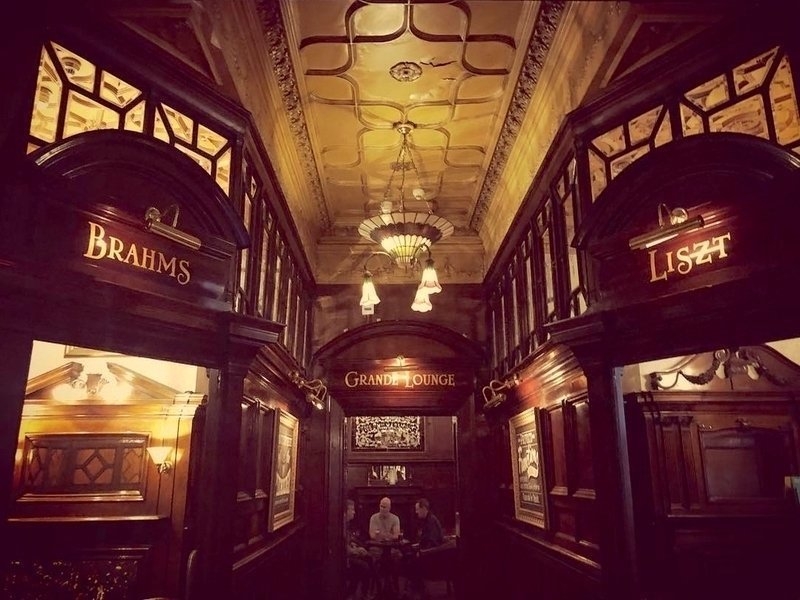 Come for the Grade II-listed urinals, stay for the booze. The Philharmonic Dining Rooms is one of Liverpool's most iconic pubs, and features a listed-status interior design scheme that comes across kind of like a Gaudi-designed R.M.S. Titanic. If you squint. Plenty of drinks on offer, of course, and a bit of food for any latecomers who missed the Shipping Forecast. Most importantly, the Philharmonic is huge inside, which should give you a bit of a breather after having spent the last few hours in cramped little boozers. 36 Hope St, Liverpool L1 9BX 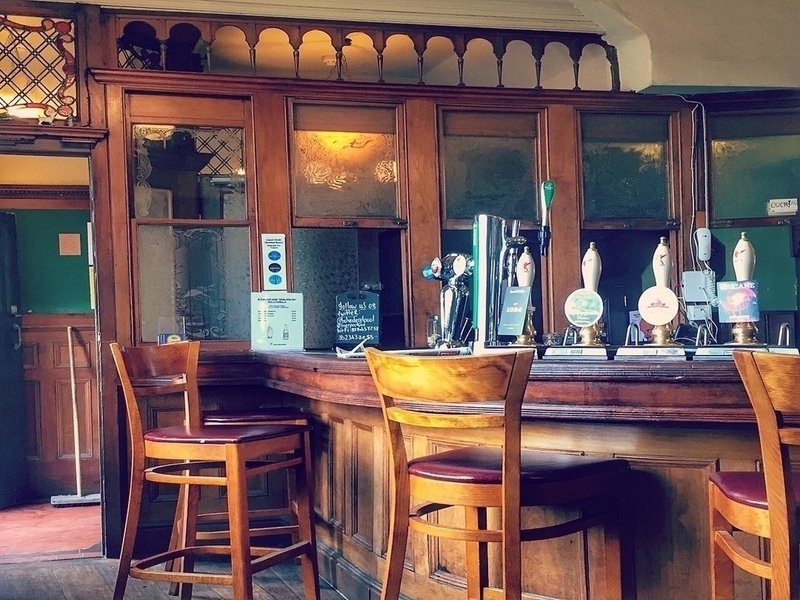 And we’re back to the cramped little boozers. The Belvedere Arms is a little tough to find, but you'll be glad you did once you get inside. It's a proper, friendly little spot, filled with genuinely lovely regulars, a "Ginnasium" (handy in case none of those local ales take your fancy) and - get this - an open fireplace. Pull up a chair, nestle in by the fire and count your blessings you’re not still outside. 5 Sugnall St, Liverpool L7 7EB

The Caledonia is a firm favourite for anyone who knows anything about the Georgian Quarter. It's pretty innocuous from the outside, but inside is a community-based pub and kitchen with great vibes, a solid live music line-up and, over Christmas, plenty of mulled drinks to keep you warm. On most nights you’ve got a good chance of finding the place engaged in some uproarious singalong, which should be a good laugh for anyone who, say, is seven pubs into a pub crawl. 22 Caledonia St, Liverpool L7 7DX 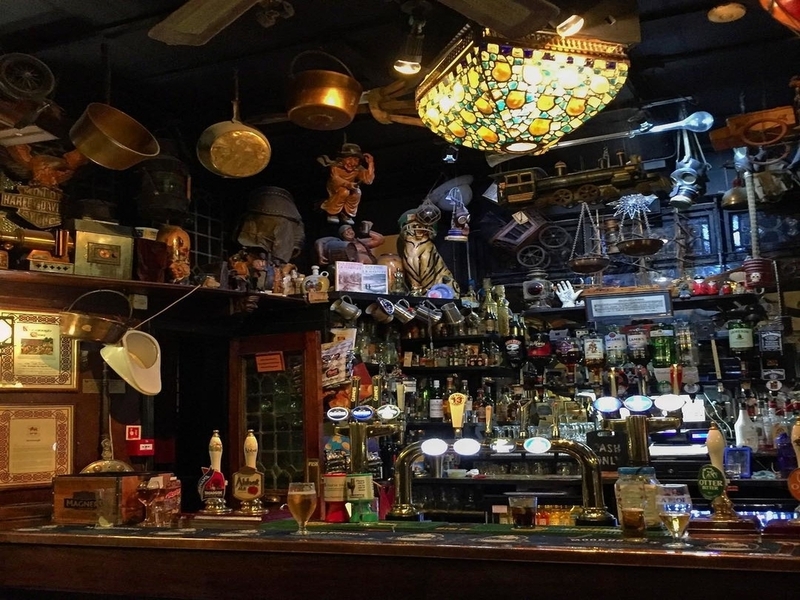 Peter Kavanagh’s is practically rammed full of atmosphere, and on a cold winter’s night will probably feel like the cosiest place on the planet. The walls and ceilings are littered with junk and memorabilia, the crowds are friendly and fun and the staff (particularly landlady Rita) are as characterful as you'll find in any Liverpool pub. This’ll be a good place to chill out before the final stretch. We’re heading to some breweries.  2-6 Egerton St, Liverpool L8 7LY

Saunter – or stagger, either’s cool – out of the Georgian Quarter and down to the Baltic Triangle and you should eventually come across the Brewery Tap. This gorgeous little pub is situated inside the old Cains brewery and serves (as you’d hope) a wide range of guest and regular beers. More importantly, however, it's perfectly located inside the Cains Village, which has got all sorts going on around Christmas, making it a great place to visit if you want to stop in for a round of crazy golf or grab a cup of coffee or get a tattoo or something. We won’t judge. Stanhope Street, Liverpool L8 5XJ 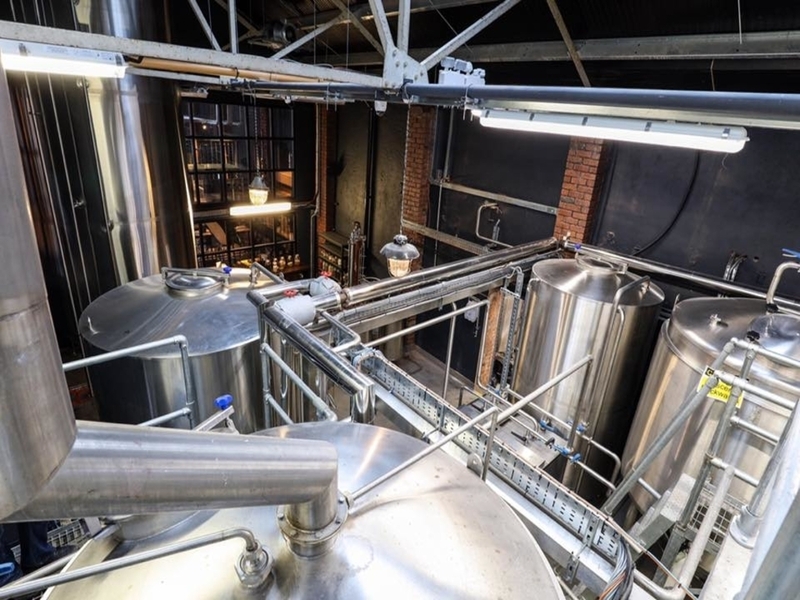 You’ve probably spotted some of Love Lane’s wares in pubs around town - Love Lane Pale Ale and Love Lane Lager are practically legendary local beers, while Ginsmiths is one of Merseyside’s most popular gins. Well, this is where the magic happens. As well as the brewery itself (tours are available, but you might not have the attention span for that at this point), Love Lane also run their own bar and kitchen where they sell an astonishingly comprehensive range of beers, ciders, gins, wines and other spirits. Aficionados: this is where you want to be. 62-64 Bridgewater St, Liverpool L1 0AY

Another pub with plenty of history. In fact, the Baltic Fleet still retains many of its original 19th century features, including the secret tunnels which link the pub's cellar, the docklands and the old red light district in Cornhill. Perhaps more appealing at the pub's modern features, such as its wood burning stove, range of local ales and the fact that it serves bowls of scouse - which, at this point, you probably need. 33A Wapping, Liverpool L1 8DQ 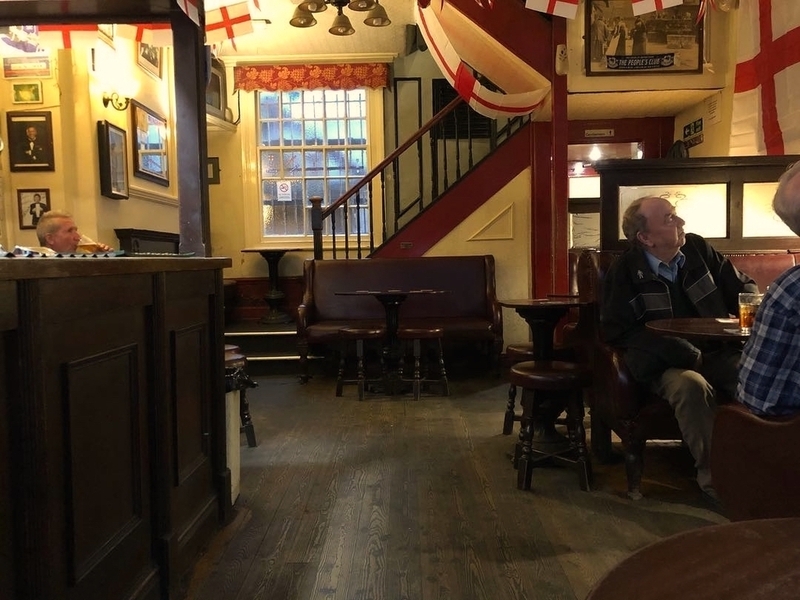 You’re going to have to make a bit of a trek back into town to get from the Baltic Fleet to the Poste House, but it’s well worth the journey. This tiny little pub is one of the best in the city. It's intimate, friendly, cheap and, on a good night, tends to be a damn good laugh, too (just thank the regulars). Really, it’s the essence of Liverpool itself, condensed into a few cramped rooms and fuelled by booze. Where better to end your night? 23 Cumberland St, Liverpool L1 6BU