‘Takes you away from all the brutalities of the world’ - The Art School, Sugnall St, reviewed

Five years may sound like a long time to some of Gordo’s millennial readers, but the great tragedy of life is that to Fatty that five years has gone past in a flash. It’s that long since he reviewed the (then) newly opened Art School.

But a lot has gone on since then. Take, for example, the opening paragraph of that review.

There is theatre inside all three front doors

That was a nod to the fact that Chef Paul 'Porky' Askew had decided to put vegetarian courses on the menu. Gordo was mildly amused. And he didn’t get one complaint on Facebook, Twitter or anywhere else for that matter.

Switch to today, have a crack at a vegan and Gordo will have to go downstairs, get a claw hammer out of the drawer and un-nail his balls from the front door before he puts his underpants on in the morning.

Anyway, let’s get on with it. Gordo sat himself down in the dining room of the magnificent building, part of an architectural heritage that is peculiar to Liverpool in the North West. It’s as if Hitler had told the Luftwaffe to leave all the best bits alone. It’s not much different to Gordo’s current favourites in London: Core by Clare Smith and The Ledbury. Porky’s house is just as pretty as theirs, inside and out.

There is theatre inside all three front doors. At The Art School, having walked past the potted trees which salute you when you walk in, a person greets you and leads you through into a bar with the original fire place, where you can sit down and neck a perfect Negroni.

The staff have that post-scripted chat. They are genuinely interested and know their regulars, whilst treating unknowns with equal good humour. Things you think you need arrive as if by telepathy, and you don’t get asked mid-mouthful if you’re enjoying your lamb chop - a crime that Gordo wants punishing by waterboarding.

The room itself is genius. There was another town house in Palma, a couple of hundred years old, visited by Gordo over three decades ago. Boasting one Michelin star, the lunch was the first real Spanish meal for Fatty, with delicate croquetas and brutal Riojas. It was the late afternoon light streaming in through the large windows (not suffering from the window tax) that did it for Gordo, as much as the food. It was trippy.

If you’re lucky enough to visit The Art School on a sunny day, you’ll get the same deal. It is an elegant, captivating room that does the job of a good lunch, taking you away from all the brutalities of the world, not dissimilar to two hours immersed in a Fred and Ginger movie.

But the food has to play its part. So does it?

The white wine and smooth onion velouté with ‘crispy shallots’ as an amuse had depths of flavour you'd struggle to find from a modern-trained chef. It needed Escoffier and had it in spades. The shallots weren’t crispy, mind you, which left the egg cup of dreams disappearing down a back alley.

The bread with real, very well sourced butter was a dream which didn’t go wrong. It sat on the table finishing off the welcome as cleverly as a matriarch getting the house ready for sale, bread baking in the oven as potential buyers peer through the kitchen.

An innovative crispy hens’ egg, held up with a scaffolding of fried potato strips, a sliver of black truffle dribbled with a blood orange hollandaise sauce was cracking. It didn’t need to be sat on the salad, possibly a bit of over-egging going on. Gordo isn’t good with egg yolk and leaves.

But then, a masculine twice baked soufflé with thyme and spinach in a cider sauce; old fashioned and chunky, riddled with flavour was a delight. Chef Porky sent out a new dish for Gordo’s opinion; simple pan-fried red mullet - delivered across plenty of modern British kitchens but rarely as well as this charmer - on small cubes of waxy potatoes sat in a béarnaise like emulsion and topped with caviar.

Then a perfect dish: pan-fried Peterhead hake, rescued from a catch destined for Vigo in Northern Spain, and a hungry nation who know quality when they see it. Porky pan fries this, skin down, just firm, then sits it on a heavy soup of white beans cooked with smoked pork lardons to that unctuous point where the juice is nearly thick, yet still sticky and hearty. He’s stolen this from the Basque country; a feminine cassoulet with great beauty, it’s the dish of the year so far.

And this is why you should visit the Art School. Porky is true to his classical training, there's not a hipster chef trained in the new classical world of Modern British who could deliver this up. They are too busy trying to out-Noma Noma, and scientifically throw several clashing flavours and textures together, delivering dishes which, in the main, are the Emperor’s new clothes. Only a handful get it right.

Gordo was driving, so couldn’t give the wine list a battering. The wines and service have actually improved, which has resulted in a perfect five out of five score. Rare, but deserved.

The Condrieu served by the glass was from Stephane Montez, a quality producer who must sing their Viognier vines to sleep every night. This was a 2016 Les Grandes Chailleés, which comes out of the warehouses at £50 a bottle or thereabout. It may not still be there, it was on the Coravin, but there are a few belters to have a go at all the same. That one was fabulous. In amongst the flowers and famous dried apricots, was a welcome bit of steel.

What Chef Askew does is take take traditional dishes from all around Europe, lightens the saucing, freshens the cooking and delivers food that has delighted for hundreds of years. It’s a joy to behold. Michelin inspectors will not reward him with a star, the national critics will pass him by as they come up North visiting their spoilt children in our world class Universities, doing a drive-by review so they can charge it to expenses.

But Gordo will, and has rewarded the team with two stars in The Top 100 Restaurants in the North guide. Because everyone in this gaff deserves it. 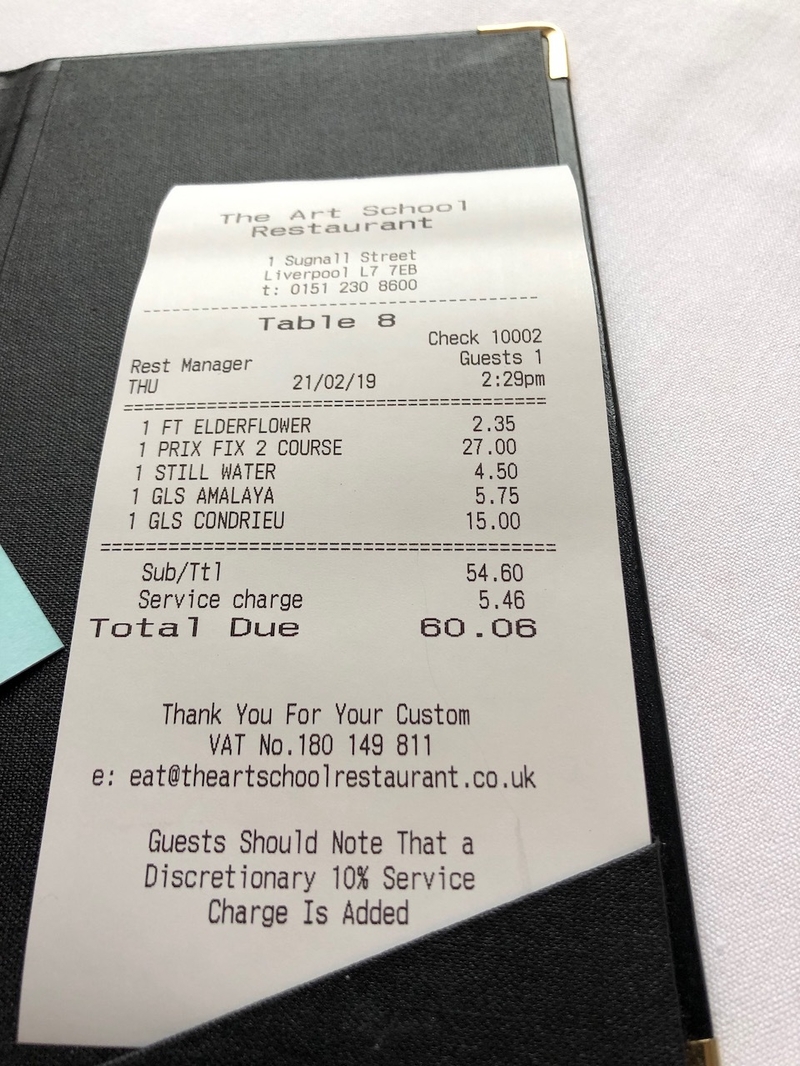