From the Liverpool Biennial to LIMF and the Craft Beer Expo, not to mention a big Bold Street party, there’s no excuse to stay at home this month

Economic catastrophe may have wreaked havoc on our region during the 1970s and 1980s but, even as our workers were laid off and our workplaces closed down, the results were never less than photogenic. And though that may sound glib, the presence of photographers like Martin Parr and Tom Wood during that era means the photographic record of decline and defiance is exceptionally strong. Decades later, these images are more popular than ever, and Tom Wood’s photographs of Cammell Laird shipyard - originally commissioned to record the fight to save it - are likely to attract big numbers to Birkenhead’s serene and lovely Williamson Gallery.

Liverpool BID Company’s Independents’ Week is designed to give independent businesses throughout the city’s BID areas (Business Improvement District) a chance to shine. There are activities from Monday July 2, but Celebrating Bold Street on the following Sunday brings things to a climax. Organisers are calling it a ‘street takeover’; with a farmers’ market, stalls and street entertainment, not to mention a big pavement presence by the many independent businesses who reside on the resurgent strip. Expect arts, crafts, gifts, food, drink and more. 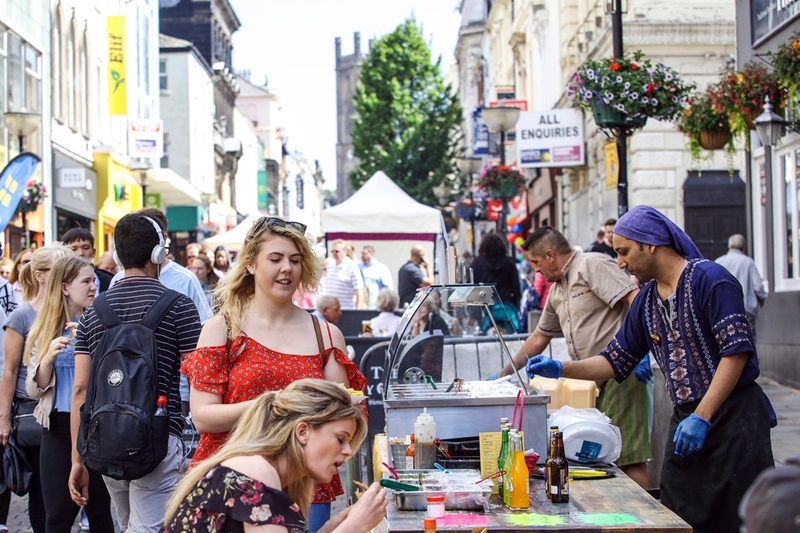 Even in the age of Spotify and iTunes, the humble mix-tape still manages to exert a mysterious magnetic pull on our imaginations. In this new show, the youth theatre and young actors’ company at Toxteth-based 20 Stories High use the mixed-and-matched audio cassette as a device to tell stories about ‘the messiness of debt’, particularly in relation to young people. Few companies combine music, movement, street poetry and storytelling quite like this dynamic bunch, so don’t miss this chance to fast-forward through tales about ‘the things we owe and the things we’re owed’, straight from the minds of the next generation.

Originally created for Christmas 2012 by a bunch of temporarily under-employed Liverpool performers, this furiously punning jukebox musical is packed up to the glitterballs with 1970s disco hits (though “definitely” - in a line that may have been inserted by a sweaty-palmed lawyer - “no Abba”). It’s already enjoyed one riotous revival at the Royal Court but now it’s back again, featuring much-loved local faces including Drew Schofield and the wonderful Eithne Brown, in an attempt to turn our gritty city into a summer-long boogie wonderland.

Once again, the UK’s biggest biennial of contemporary art is here with more visual trickery and conceptual mischief, this time under the theme ‘Beautiful World, Where Are You?’ As always, this art colossus bestrides our major venues; including Tate Liverpool, the Bluecoat, Liverpool Playhouse, St George’s Hall, RIBA North, the Victoria Gallery & Museum, and on and on. There are far too many artists, works and events to be listed here, so head over to the official website to find out more. And don’t forget the Independents Biennial too – the fringe festival that gives a further 200 artists a chance to exhibit right across the city region.

Sefton Park has been kind to the Liverpool International Music Festival (or ‘LIMF’ as we all know and love it) since it first set up shop there in 2012. This time though, things are a little different. Formerly a free event, LIMF has followed the trajectory of other successful city festivals such as Sheffield’s Tramlines, and this year will be ticketed for the first time. Having said that, the line-ups on both days are long - including the likes of Example, Wiley, Basement Jaxx, Toddla T and DJ Jazzy Jeff - and yet prices remain pretty affordable at just a fiver per day for standard adult entry. Advance booking is recommended, and it remains to be seen how this new system might change what was always a wonderfully free (literally) and easy festival.

Having established itself as an annual event in the Baltic Triangle, Liverpool Craft Beer Expo shunts its 300 beers, cider truck, gin bars, street food and DJs across to the other side of the city for the 2018 iteration. With the new venue (the Invisible Wind Factory) comes the promise of ‘a new format’, with more space being opened up to accommodate ‘more brewers from all over Europe’. Always a relaxed and friendly affair, this year’s event will feature breweries including De La Senne from Belgium, Kona from Hawaii, and Mad Hatter from about half a mile away.

Parties organised by city promoters 303 can be dark and dirty affairs, but their summer celebration at Constellations promises to throw a little light on the usual techno-tinted proceedings. With fourteen long hours to play with, Spain’s Henry Saiz takes over the outdoor decks during the daytime, with 303’s own resident DJs putting in the night shift. It’s a return visit for Saiz who played the same party last year, and those who were there will no doubt be at the front of the queue this time round.

Whether we’ll ever get used to adding the ‘royal’ prefix to the Albert Dock’s name is anyone’s guess. The suspicion remains that the stately warehouse complex is regal enough without it. Still, that’s now its official title, and it’s under this identity that it welcomes home the crews of the Round The World Yacht Race after almost a year at sea. The sprint finish takes place from around 10am on Saturday July 28, but the whole weekend is packed with performances and parades, including a chance to step on board the yachts for yourself. Inspiring stuff no doubt - though also a good opportunity for landlubbers to wonder at the insanity of it all.

Remember Tony Hancock? The Independent clearly didn’t when it recently described him as a ‘forgotten’ comedian, despite being one of the most popular British entertainers of the post-war world. Following a subsequent Twitter storm, it switched the word to ‘legendary’, and it’s in that spirit that impressionist James Hurn brings his dazzling Hancock tribute show to the Epstein. Presented in the style of a live radio recording, Hurn performs classic Hancock scripts by doing all the voices himself - so that’s Kenneth Williams, Sid James and Hattie Jacques as well as the main man. “Well, stone me!” as the forgotten fellow himself might say.