Liverpool theatre producer Bill Elms has created a nine-day outdoor live performance festival to support the city’s theatre scene, which has been badly affected by the coronavirus pandemic.

The Liverpool Theatre Festival will take place between Friday 11th and Saturday 19th September 2020 and is being staged in association with the team behind St Luke’s Bombed Out Church. The festival line-up includes musical theatre, drama, comedy, cabaret, monologues, and children’s shows.

Live performances came to a complete standstill nationally in mid-March due to Covid-19 lockdown. This has had a devastating impact on all careers linked to live performance, from performers and technicians, to venues and suppliers. With no indication on when safe and financially viable indoor performances will resume, Bill has been working tirelessly behind the scenes to organise the festival now that outdoor live performances are permitted.

Performances will take place within the church walls, in the grounds of St Luke’s in the heart of Liverpool city centre and will follow stringent social distancing and Government guidelines.

Capacity has been reduced to ensure socially distanced seating and there are a number of hand sanitiser stations at key areas throughout the venue. Audience members, cast and crew will undergo temperature checks before entry and the wearing of facemasks will be compulsory when moving round the venue. Visitors are encouraged to attend only in their social bubble groups.

Increased safety guidelines will also take place behind the scenes. The one-act shows will have a maximum cast of four (socially distanced) performers per production and will last a maximum of 75 minutes to reduce audience movement.

Liverpool Theatre Festival will include live productions of Swan Song by Jonathan Harvey, A Fairy Tale Journey Across The Mersey, Laughterhouse Comedy, The Best Of Tommy Cooper, Sweet Mother, Shakers by John Godber, Deathly Confessions, Matinee Musical Classics, Music Of The Night, Judy & Liza, Hurrah For The Pirate King! and Something About Simon.

Producer and artistic director Bill Elms explained: “Like many colleagues in our industry, work came to a complete standstill in mid-March and it has been a complete shock to the system and tough at times. But after working in the industry for 30 years, I could not just sit back and watch everything disintegrate before our very eyes. I had to do something and after a lot of research, ringing round and planning, Liverpool Theatre Festival was born.

“We need to pull together and support our talented artists and incredible production companies, and hopefully something positive can come out of these dreadful times, I would love to see the festival grow to become an annual event. St Luke’s is the perfect backdrop for the inaugural Liverpool Theatre Festival. This is about providing theatre lovers with a platform to come out, enjoy and experience live entertainment once again in a safe environment. This is the first step on a long road to returning to indoor theatre and safety for customers, cast and crew is paramount. We worked hard to keep ticket prices affordable without compromising on quality.” 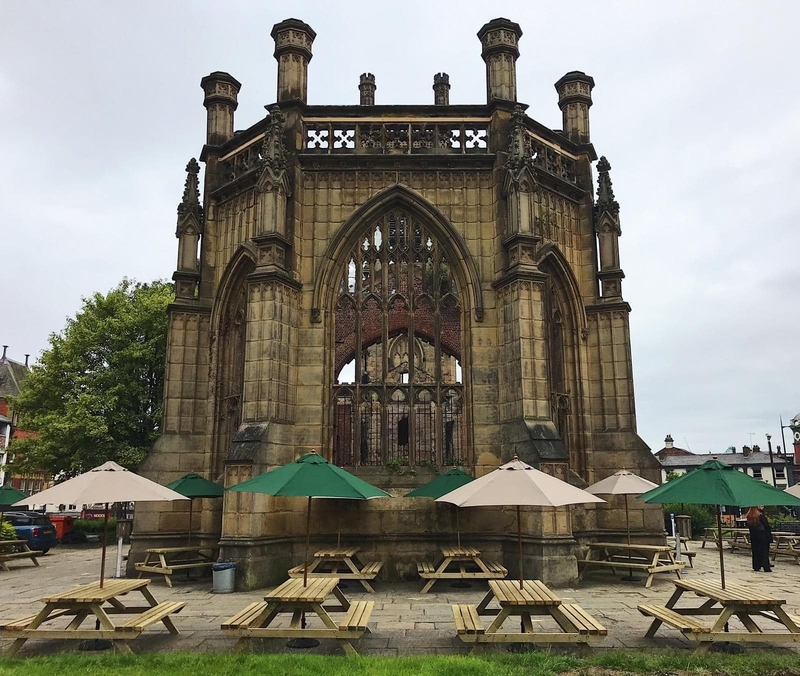 The team at St Luke’s have been successfully running a covid-safe garden café/bar on site for a few the last months and they will provide theatregoers with premium drinks and freshly cooked pizza. Drinks can also be purchased on a special app and delivered to ticketholders at their seats.

“St Luke’s Bombed Out Church is dedicated to support the local arts scene,” said Kate Jones from St Luke’s Bombed Out Church. “Our team has been working hard to produce a Covid-19 safe environment for local theatre and other cultural events along with our now established garden bar. We are thrilled to welcome back a Bill Elms production to our wonderful iconic building, and we’re delighted to host the very first Liverpool Theatre Festival.”

Liverpool. 1997. The world is changing, and in the staff room, English teacher Dave Titswell finds that not all change is welcome. Is he reaching the end of the line? Or will a school trip to the Lakes change things for the better? Swan Song is a comedy by award winning writer Jonathan Harvey, first performed at the Edinburgh Festival and Hampstead Theatre.

What - A Fairy Tale Journey Across The Mersey

This brand-new Pantomime Mashup follows the journey of young Princess Maureen Anna (Mo-Anna), on her journey across the Mersey. Always putting the people of her island first, she must face terrible danger, difficult challenges and laugh out loud comedy.

What - The Very Best Of Tommy Cooper

The Very Best Of Tommy Cooper (Just like that!) is the follow up to the award winning The Tommy Cooper Show. We focus the spotlight entirely on Tommy’s stand-up act offering all the misfiring magic, trademark one-liners and dazzling wordplay, starring West End star Daniel Taylor in the title role. “Tommy Cooper was given that wonderful and rare gift to make people laugh, often by simply standing there,” said Daniel Taylor. “His most-loved routines draw on an innocent sense of humour that appeals to all ages, and I’m sure that they’ll stand the test of time.”

A series of chilling dark comedy monologues starring Crissy Rock, Sam Walton, Thomas Galashan and James Templeton. Four stories to make you laugh, cry, and send a shiver down your spine… Sometimes the only person you can share your secret with is the dead.

A scouse revival of John Godber’s legendary Shakers. Every town has its Shakers, the must visit cocktail bar where everybody wants to be seen. Get a hilarious behind the scenes glimpse into this world through the eyes of four long suffering waitresses.

“Carol, Adele, Nikki and Mel, work in a bar that is worse than hell!”

Produced by Nwoko Arts and written by Maria Paul, the play is based on real stories of family and friendships in one of Liverpool’s strongest communities. Sweet Mother is an oral history project created using verbatim interviews with four real women who became friends through the shared experience of raising families in 1960s, 1970s and 1980s Toxteth. It looks at the previously untold stories of white women who fell in love with, married and raised families with black men in the Liverpool 8 community during a time of racial unrest. Sweet Mother stars Margaret Connell, Amanda George-Higgins, and Lisa Symonds.

What - Music Of The Night

Music Of The Night is a spectacular evening of songs and duets from the most popular and best loved West End and Broadway musicals, including Les Misérables, West Side Story, The Lion King and of course The Phantom Of The Opera.

An afternoon of hit songs from the Golden Age of Movies and Musicals, a perfect program of favourite all-time classic hits. Liverpool-based Operatic and Classical Tenor Roy Locke's (Phantom of the Opera, Australian Opera) breath-taking voice will take you on an emotional, sentimental, and uplifting journey through some of the greatest works of Western music, and is joined by Special Guest West-End Soprano Olivia Brereton (Phantom of the Opera, Les Miserables) and musical director Tom Chester.

When - Friday 18th, with performances at 6pm and 9pm

The incredible talents of two of the biggest names in Hollywood showbusiness – mother and daughter Judy Garland and Liza Minnelli – are back together once again thanks to this special musical experience, now celebrating its 10th anniversary. Judy & Liza features performances of iconic songs Cabaret, Maybe This Time, and The Man That Got Away. The self-penned musical biopic by Emma Dears sees the Liverpool actress and singer return to the stage as Liza, joined by Helen Sheals as Judy. Emma’s West End roles have included Les Miserables, Miss Saigon, and Oliver. Helen is widely known for her roles in Coronation Street and Downton Abbey.

What - Hurrah For The Pirate King!

Direct from its Smash-Hit seasons at The Just So! Festivals (2018, 2019) as well as the Atkinson Theatre (2020), Follow the great Pirate King‘s Adventures as he takes us on a Magical and Musical journey to find a treasure beyond Gold and Jewels!  Mysterious places shall ye see, Mateys! from Hushabye Mountain to Cat Island where the Queen of the Cats holds her Court, to mysterious and exciting places over the Briney Sea! With her help, can The Pirate King entice the legendary Unicorn, keeper of the magical Unicorn Diamond to appear?  Buckle yer Swash ye Land-Lubbers! – experience Opera, Ballet and Art-Song in a fun and inclusive way designed for children and their grown-ups, from ages 0-99.

What - Something About Simon – The Paul Simon Story

In a poignant evening of song, story and reminiscence, Liverpool singer songwriter Gary Edward Jones honours the genius of Paul Simon in his one-man show. Weaving the unforgettable melodies with biography and cultural history, Gary takes music fans deep into Paul Simon’s extraordinary life and straight to the heart of his music spanning seven decades. The show wowed audiences at last year’s Edinburgh Fringe Festival and was specially selected to play in a prestigious New York showcase in December 2019. The show should be playing Off-Broadway in New York this Autumn, but Liverpool has the honour of welcoming the show back to the stage as part of this new festival. Music highlights include The Sound of Silence, America, and Bridge Over Troubled Waters.

Tickets for Liverpool Theatre Festival start from £10 and are available from Ticket Quarter. Check the website for updates.