'We shiver in our coats amid the blooms' - The Florist, Hardman St, reviewed

George Melly, a vase of gin and some Lenten food at 'the most photographed bar in Liverpool'. By Angie Sammons

The late, great George Melly liked a drink. Probably as much as he liked his women and his men. A good, long gargle was as much of his persona as the garish check suits, the cheeky Fedora and the laconic drawl.

Melly would freely imbibe on stage during his trad jazz performances, becoming more ribald as the evening went on.

Appearing at Bootle Town Hall, in late 1996, the Liverpool-born orator silenced the good folk of the parish with the story of how he had been down to his old stamping ground of Sefton Park earlier in the day. He had taken the opportunity to visit a flower shop on Aigburth Road and sent two dozen red roses to a local lady “friend”.

His recipient was delighted when they arrived. “Oooh Edna,”  she boasted to her pal. “See what my gorgeous George has bought me. I suppose I’ll have to spend the weekend on my back with my legs in the air for that.”

A longtime photographer colleague recalls Melly's words as we contemplate the refreshing vase of gin (£18.95) sitting before us in The Florist, Liverpool’s newest bar/restaurant.

He’d used at least two rolls of film that night and he is lamenting how EVERYONE is a bloody photographer these days.  “What would Cecil Beaton (Audrey Hepburn’s favourite snapper) have made of it all?”

It stems (sorry) from The Florist’s pre-opening PR blurb which confidently predicted the venue, situated with some irony in what was the Old Blind School, would become the “most photographed bar in Liverpool”.

With an eye, perhaps, on the wedding market, here they give good floral. No expense has been spared on an op for a photo op. Festooned everywhere are artificial blooms: cherry trees in the foyer,  spilling from Jean de Florette style bicyclettes in the lounge and tumbling over the dining tables upstairs.

It is pretty as a picture and sure enough, the lenses are whirring and the shutters sounding.

“We are Instagrammers”, two young women, brandishing sophisticated Nikons, tell us. But one can’t quite get a shot of some neon-lit roses and my friend starts giving her a tutorial on f-stops. A subject on-the-road George would have had plenty to say about.

We are in the bar. A wide open door allows the April, single-figure elements to sweep in. Next to it, a DJ is installed playing incessant “sophisticated sounds” and, naturally, “chill”.  Maybe they want us to feel like we are in an actual northern England garden.

We shiver in our coats amid the blooms as we survey the elegant drink and cocktail menu. It runs into 17 pages, threading the botanic theme, as is the current style, right throughout its gin-based concoctions which, along with the decor, can’t fail to make this drinking destination of choice for many.

Now, before we go on, yes, this was The Florist's first week and, yes, there will inevitably be hiccups, and not the kind resulting from that gin vase. It is unfair, some might say, to go in and review the food so early. Others might say it is perfectly fair if you presented with a full price, £112 bill for two at the end of it. Which would have been even more if the tea and “artisan” coffee machine had been working.

Thus we are not going to dwell unduly on teething troubles - although the ear-splitting burglar alarms, sounding during dessert, offer a welcome respite from the evening’s all-pervading electronic muzak.

Owned by New World Trading Company which was, until last year, part of Living Ventures, there are grand plans to cast wide The Florist seed. Already there is a branch in Bristol and, we are told, Watford, is next.

Back in Liverpool, New World also operates the successful Smugglers Cove and Club House brands and there are certain common denominators in all three. One such is the hanging kebab. Whenever one goes swinging by - and however lovely a thing it might be with its lumps of meat dangling off a long string - it cannot fail to conjour visions of the aftermath of a particularly efficient ISIS execution. But that’s probably just me.

The menu - or “culinary delights” - is divided into grills (those kebabs), rotisserie (half a Red Tractor chicken) and a list of “main” dishes  imagined in such a way that ordering is a leap of faith. Cod is tandoori-battered; raw cauliflower is a highlight of the chickpea and sweet potato tagine and the risotto is composed of Lenten beetroot and pearl barley. It is rather as if the group chef back at the corporate HQ wants to go up the mountain the hard way and take everyone with them - in bare feet.

None of these things we try and I am almost prepared to believe that our failure to do so is one of the greatest gastronomic oversights we have ever made.

An appetiser of baked kale crisps (£2.50), drizzled with honey and black beans (they aren't), are neither appetising nor crispy, instead having just the faint whiff of childhood Sunday afternoons at home.

Curried mussels (£7.50), served in a turmeric and coconut sauce, are as eye-pleasing and fresh as the scenery, but the broth is ruined by too heavy a hand with the salt

A jar of pork rillette (£5.95) is a decent, smooth paste but not especially enlivened by the apple chutney (which first has to be scraped off the closed lid), baked olive oil croutes (toast) and Braeburn apple slices. Perhaps they don't want to spoil us for the main event.

And to the single fillet of grilled seabass (£14.95), skin nicely seared, the slender rest a little overcooked. It comes with a handful of pepper, red onion and broad beans described as a raw, pad Thai salad, which I have to have and which I don't have, and a small ramekin of satay sauce which is white rather than the characteristic nutty brown.

Marinated lamb rump (£16.95) tastes only of flesh and sits on some crushed potatoes mixed with a tomato and olive dressing, It is not compensated by the gem lettuce which, after being cut in half and thrown on the griddle for a couple of minutes, looks every bit like something you’d discover lolling at the back of the fridge.

We therefore wolf the cheeseboard, impaled apple, “artisan” biscuits and all.

“It’s blue cheese,” replies our server when we ask for some detail (it is, in fact, Dolcelatte, along with Manchego and some very good Shorrocks two-year-aged Lancs).

We fare less well with the  elderflower meringue and caramelised peaches, a little dice of prosecco jelly, a good raspberry coulis and toasted almonds (£5.50) let down only by the meringue which dissolves into liquid upon contact with the spoon. We wonder if it is even cooked.

“There are all kinds of meringue,” we are told.

Never mind Cecil Beaton, what would Mrs Beeton have said? 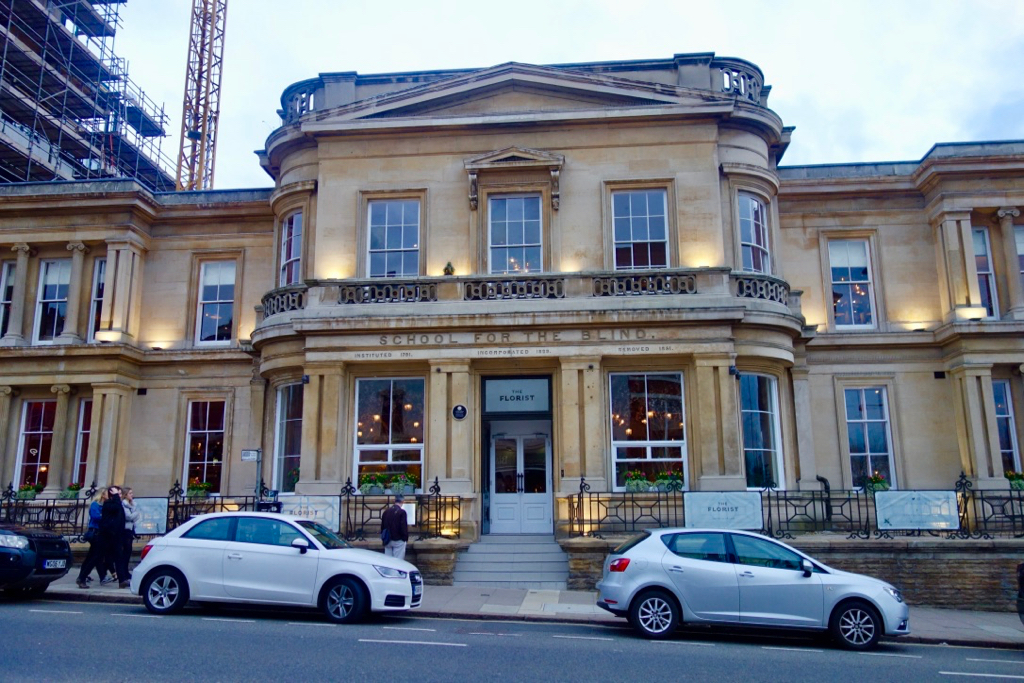