THEATRE Types billed it the most important show the Everyman had put on in decades.

A chime went up from the wary. “A musical, you say? Fiddler on the Roof, you say?”

Hang on, replied the Types. This Fiddler on the Roof wasn’t going to be merely some crowd-pleasing knees-up beloved of am-dram and school drama heads.  No. This Fiddler On The Roof would be a pivotal moment, marking the return of the Everyman Theatre’s repertory company: 14 actors handpicked from hundreds, after a gruelling audition process.

“By having a rep company we’re creating a family that can really respond to the city, who will create a conversation with our audiences and will together create vibrant, vital work,” said the blurb.

Whether the chosen few, drawn from all ages, backgrounds and regions, did judges’ houses we cannot know.

Nevertheless, theatres around the land will be watching closely, some wondering if the comeback of the Everyman’s long abandoned model – the same set of in-house actors treading the boards in plays for a season or longer –  can outperform the modern notion of flatpack, touring productions.

What better way, then, to begin the bonding process, than with a big musical? A proper musical with refrains and choruses; one where the songs lead the narrative rather than punctuate it. The sort we can’t seem to make any more.

Even better: a musical “inspired by the current refugee crisis in Europe”, at least according to the Everyman and Playhouse Artistic Director Gemma Bodinetz, here at the directing helm of the rep's maiden voyage. 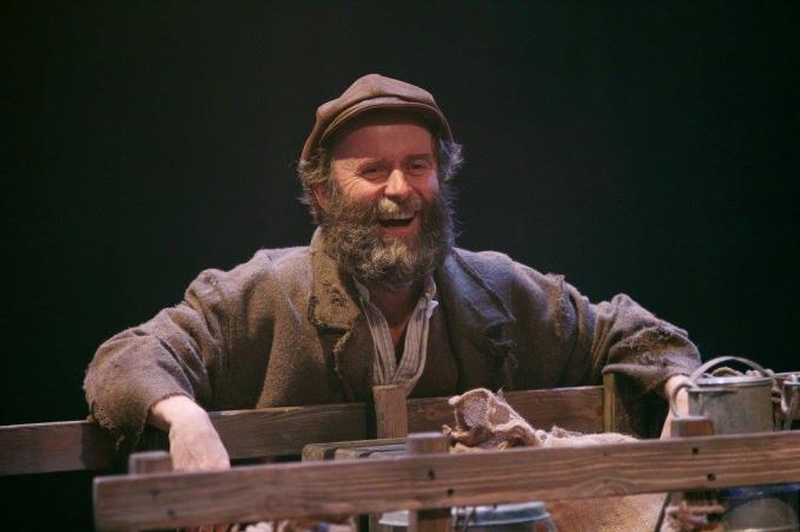 Fiddler On The Roof centres on impoverished milkman Tevye (a cracking, polished performance, here, by Patrick Brennan, above), and his five, fresh faced daughters; a Jewish family among many in the Pale of Settlement in Tsarist Russia.

It is 1905, their world of cultural and religious certainty is being rocked by outside influences which will ultimately capsize it. Why even the role of Yente, the old village matchmaker (Pauline Daniels) is diminished as his girls, Tzeitel (Laura Dos Santos), Hodel (Emily Hughes making a sparkling professional debut) and Chava (Zelina Rebeiro), marry for love, rather than money, and increasingly across the divide.

A scant but effective set in the round, adorned by little more than a couple of tables and a versatile cart, allows the sure-footed ensemble to move and perform with verve, precision and conviction and it is difficult not to feel one is locked in Tevye’s world.

Even though the show is three hours long and some of the jokes are quaint (you can’t mess with the script when you are licensing a play, even a 53-year-old play) it’s a world one is in no hurry to leave and at the end it is difficult to walk out without at least one nerve a little raw.

Being a time-tight show, just now and again exchanges of dialogue are a second too hasty. Yet the cast has the audience in its palm, which will afford them a slightly more relaxed delivery in the scenes that need it.

That said, this is a brilliant production, from the first violin scrapings of the eponymous Fiddler on high, segueing into the glorious, rousing Tradition!  to the final, mournful Anatenka as Tevye and his fractured community shuffle from the certainty of the Old Country to the New World, via a rather polite pogrom, three weddings and a bomb of energetic song and dance: Matchmaker, Matchmaker, If I Were A Rich Man, Miracle of Miracles and Sunrise Sunset. 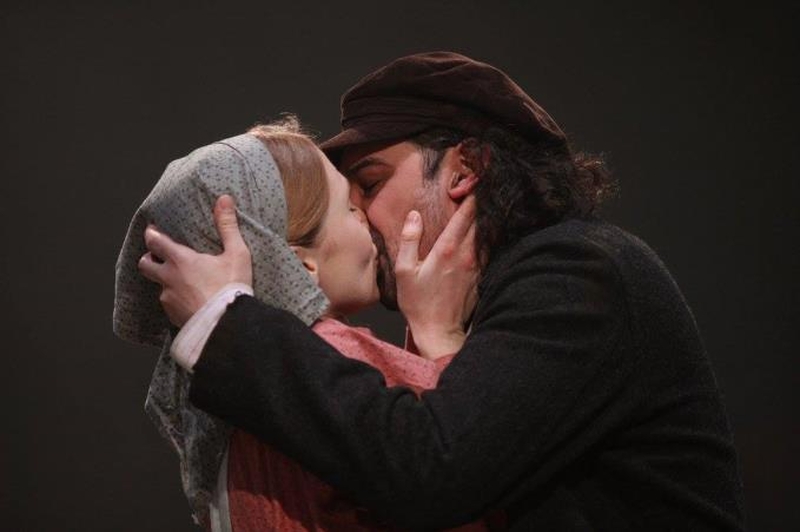 Add performances such as Dean Nolan's dizzy tailor Motel and Richard Bremner's butcher Lazar Wolf and there are plenty of reason to smile.

It isn’t the most important show the Everyman has put on in decades.There are four more between now and June for that; vehicles which will not only road test the actors’ abilities and chemistry but their wider appeal with the ultimate judges: the audience.

Crucially, we will see if that unique loyalty, which Everyman rep companies used to foster with ticket buyers in the golden days, will come to the fore, giving a foundation to the still-new theatre and, perhaps, tempting other provincial venues to dip a toe.

It’s a shame this production of Fiddler on the Roof is only on for three weeks and is practically sold out.