Jeez, it sure has been one hot minute since we last checked in with a new openings roundup. I mean, the world has been on pandemic pause so I guess it was to be expected but BOY, does it feel good to be flexing the old muscles again.

I hope you’re bloody hungry because today, we’re bringing you a whole raft of new places to eat ’n’ drink in Liverpool city centre and beyond - a tsunami of new restaurant menus and bars to prop up.

You can forget your post-lockdown diet and you can shove your calories where the sun don’t shine ‘cause Scouseland is back with a vengeance and you aren’t gonna wanna miss this comeback, kid.

So clear your diary, call in sick, fake your own death. Do whatever you gotta do to get to these new gaffs pronto. What do you get when you cross a Scouser in Chinatown, on the lookout for some fine French fare? Brasserie Loup - the brand new, 60-cover restaurant a le Français - and a glowing example of the cultural melting pot Liverpool has come to be. We’re being told to expect “simple dishes, hearty portions and a lively atmosphere”, which sounds a lot like how I remember lunchtime in the school canteen actually.

Something tells me, though, that this’ll be a far cry from school dinners. Perhaps it’s the promise of plush velvet furnishings, chic artwork and antique chandeliers bedecked in ivy. Or maybe it’s the rumours of smooth wines, signature cocktails and an exquisite food menu showcasing French classics with a modern finesse. Turkey Twizzlers are nowhere to be seen but an indulgent onion soup, beef tartare and moules-frites are all poised and ready to ravage your palate. Liverpool’s affinity with NYC is no great secret. In fact, it’s a celebrated fact of life on the Scouse food and drink scene. Next in line, joining the edible homages to The Big Apple, is Derek’s - a New York-inspired sandwich shop bringing a taste of the traditional Italian-American deli to L18. The menu is small but mighty, comprised of five sandwiches that are made fresh and flying out the door daily.

You’ve got The Gabagool (a Tony Soprano classic), The TKY turkey sub, The Moltisanti, The Skinny Dennis; and of course, The Reubenstein, piled high with pastrami, Emmental and sauerkraut. After all, when it comes to New York sandwiches shops, a Reuben is non-negotiable, as is a damn fine cup of cwaffee. Derek’s serves up freshly ground coffee, from bean to cup, iced or cold, with a choice of locally-sourced, vegan syrups. Had quite enough caffeine? Stick to the secret-recipe peach iced tea or strawberry lemonade next time you’re grabbing a gabagool. Okay, we’re cheating slightly here because Dwntwn technically opened its doors back in September 2020 but it actually holds the record for the shortest opening time (seven hours) before being shut again. (Cheers, Corona, you lil bitch.) The luxe lounge bar, which resides in a subterranean “disco den” in the heart of Liverpool’s business district is preparing to reopen once more - and plans to stick around for much longer this time.

We’re calling it Dwntwn: Take 2 and we’re ready to fight anyone who gets in the way for front row seats. Add it to your list because there’s a round of highbrow cocktails with your name on it and a soundtrack of live piano and soulful house ready to schmooze you into the small hours. If you didn’t already feel like a fat hippo after months of spooning your pillow and ordering takeout, you will after a visit to this place. Fat Hippo is finally bringing its outrageous burger-based creations to the North West via Bold Street and we are PUMPED for a peanut butter burger with a side of dirty fries. Yep, you read that correctly: peanut butter burger. It goes by the name of PB&JJ and is a messy-but-marvellous stack of double beef patty, American cheese, chunky peanut butter, bacon jam and smoked chilli jello. Hello, chilli jello. There’s plenty here for little ones, chicken-eaters and the herbivores amongst us at this rule-breaking burger joint and it’s just a matter of days before you can find out what all the fuss is about for yourself.

A brand new food concept from the team behind Maray, setting up shop at Duke Street Food & Drink Market. Need we say more? With that lot of absolute hospitality powerhouses at the helm, you just know it’s going to be a stellar addition to the scene. Sabich takes a blank canvas and colours it with flavours and aromas from the Middle East. Sandwiches, rotisserie chicken and drool-inducing sides are steered by authentic recipes from the transcontinental region, introducing a casual dining experience that is sure to turn heads.

The signature dish is also where Sabich gets its name - a sandwich layering aubergine, eggs, tahini, and mango pickle inside a warm, pillowy pitta. Sabich’s juicy rotisserie chicken is another menu staple, slow-cooked in a homemade harissa butter and served with a choice of sides, including baba ganoush, cauliflower bhajis and sweet potato wedges. Who knew street food could be quite so sophisticated? 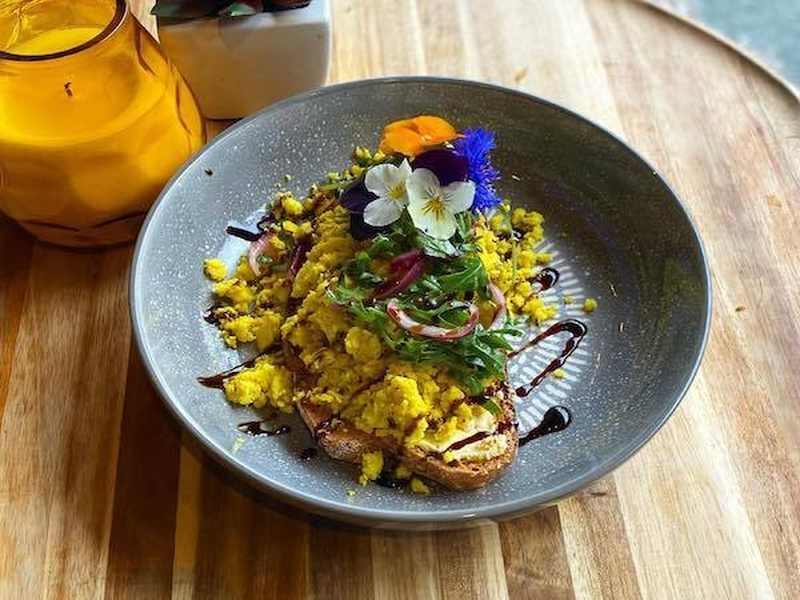 Amidst the rabble and melee of returning to some semblance of life as we once knew it, find sanctuary (and great food) at the new Lost Lounge venue, slap-bang in the city centre. Launched in collaboration with local radio station, Svara Radio, the laidback music venue, cocktail lounge and day-to-night eatery gives visitors somewhere to bask in Liverpool’s contemporary culture. From breakfast and brunch to evening small plates, the food menu carries vegan influence but tickles the tastebuds of all. Ingredients are locally-sourced and champions of neighbouring suppliers. The cocktail list is classic but cool, there to compliment an eclectic roster of live music and events. Right, let’s keep this one short and sweet because we recently interviewed the brains behind the Mamasan restaurant group and that’s well worth you tucking into. Here’s a quick taster to get you going though: Mamasan is launching in the old Wahaca venue, just off Hanover Street, on the crust of Liverpool ONE. It’s a fusion restaurant with flavours from all over Southeast Asia. The food menu features classics like Thai green curry, alongside more curious options like an Anglo-Asian bacon butty slathered in burnt chilli jam and hung yoghurt. The cocktail list is contemporary but accessible, providing Instagrammable drinks that will rake in the double-taps; theatre in a glass that tastes as good as it looks. Ooh la la, we’re being spoilt on the French food front here aren’t we? This time, it’s Pierre Griffes - a cosy little café bar and bistro opening just outside the city centre. We might be a fair few hundred miles away from the Champs-Élysées but Pierre Griffes is every inch the authentic Parisian dining experience. The interior is rustic by design but we can imagine it gets real romantic in here when the candles are lit, the Malbec is poured and the Coq au Vin is a-cookin’. Food will be served from breakfast through dinner, whipping up timeless French favourites including fresh pain au chocolat, croque monsieur, steak baguettes, moules mariniere and boeuf bourguignon. Pierre Griffes also promises to beguile breakfast-hunters and late dinner dates alike with a unique blend of coffee to savour in its inviting “oasis of calm”. Sounds très bangin’, non? If anyone can polish a turd, it’s the team behind The Botanical Garden. They spent the tail end of last year transforming a derelict beer warehouse into new 240-person outdoor drinking den, Sub Rosa. Nestled between the the Royal Albert Dock and the Baltic Triangle, it’s a little off the beaten track but a true hidden gem for those with a penchant for boozy picnic vibes. Gin and local brews will be a big focus here; food is currently being provided by Taco or Don’t but Sub Rosa - which, by the way, means ‘happening in secret’ - plan to rotate vendors to give local businesses some airtime (literally).

Open for a limited only, April through September, the hideaway is a concept designed to herald the Great British summertime. Ah, that must be why they’ve cautiously converted industrial containers and what look like retro bus stops into covered seating for merry revellers to sit in then. When the sun has got its hat on, you’ll find us propped up on the 22m grass bleachers - a style motif synonymous with The Botanical Garden and the perfect place to catch a bronzy while you’re boozing. 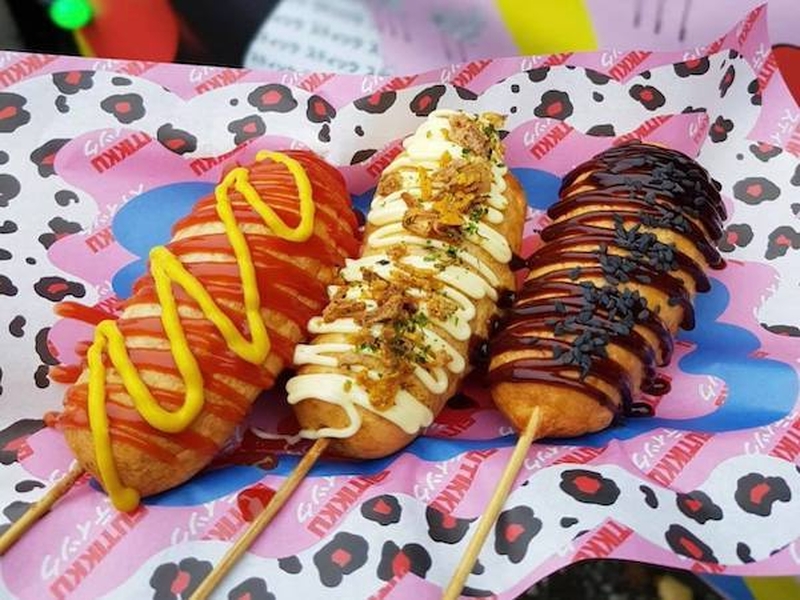 Travelling the world might still be on hold but Sutikku Bowl is bringing a slice of Japan to South Liverpool with its menu of gyoza, katsu curries, noodle dishes, bowls, don buri and street food.  UK food market regulars, Sutikku decided 2021 was the time to set down some permanent roots and have made a cosy corner in Aigburth their new Liverpool home. The petrol blue facade is foreplay for an orgasmic explosion of colour and artwork that makes up the technicolour interior; prints created by the co-owner herself. If the shots that are already leaking their way around social media are anything to go by, these guys can clearly turn their hand to artistry on the plate too.

Sutikku's got the style down; only time will tell about the substance. But we've got high hopes and reckon this one’s going to be a smash hit. Even the sauces, glazes and brines here are all handmade, blending the finest Japanese ingredients with local produce, and when something has been a real labour of love, I truly believe you can taste it. What: The Old School House

These guys are ticking all the boxes with their new pub restaurant on the coveted and historic Lark Lane, on the former site of the 19th Century Christchurch school. In the cellar lay a roster of rotating cask ales (and hopefully no buried bodies of school teachers scorned). Up on ground-level is a laidback little haunt with a dozen European craft ales on draught, a cocktail list from around the world, and a pan-European menu served seven days a week, early ’til late. Majoring in wild sourdough, beer breads, chewy pretzels, fresh focaccia and wood-fired pizza, dress code here is: eating pants and elasticated waistbands.

Read next: Revolutionary road - why LEAF is one of Liverpool’s most historic gems

Read again: Lockdown rules: 10 things we can’t wait to do from 17 May