On The Prowl | Rose Lane

MY particular corner of L18 is one that estate agents often describe as “desirable”. While my own house’s wide-open aspect may simply give me a view of an Indian takeaway’s extraction chimney and a pharmacy’s unsettling razor-wire defences, a quick run-through of the local amenities makes it clear why it’s so adored by the shiny-suited mob.

There’s Allerton Library across the road, and that’s always good for a rumour of the “Have you heard they’re turning it into a Nando’s?” variety.

There’s Allerton Library across the road, and that’s always good for a rumour of the “Have you heard they’re turning it into a Nando’s?” variety.

There’s Chandlers hardware and homewares shop – a great place to pick up a trowel, a Father Christmas beard and a packet of cheap Mentholyptus. And there’s the “ever-popular Allerton Road” just round the corner with its waxing-and-waning culinary reputation and variant manifestations of the 86 bus.

There’s also Rose Lane, a half-mile strip that runs up and over the hill down to Sefton Park, affording residents the opportunity to enjoy two different sizes of Tesco, a night out at the British Legion, or simply to get the hell out of the ‘hood thanks to the presence of Mossley Hill station.

While Allerton Road may be the more obvious evening destination – recent newcomers Maray and Three Piggies “alehouse and canteen” have added some much-needed variety – Rose Lane has a few options of its own tucked between its neat terraced blocks and handsome canopy of trees. And because I’ve often walked past these venues on my way to the train while not giving many the benefit of my custom, I decided it was time to prise the PlayStation controller from my youngest’s mitts and enjoy some quality time together prowling our neighbourhood’s doorstep.

It was early evening, mid-week, post-Christmas.

“Have you booked anywhere?” asked youngest.

“I… don’t think it’ll be necessary,” I replied as we stepped inside L’Olivetto (“seriously Italian”) and realised we could take our pick of the place. 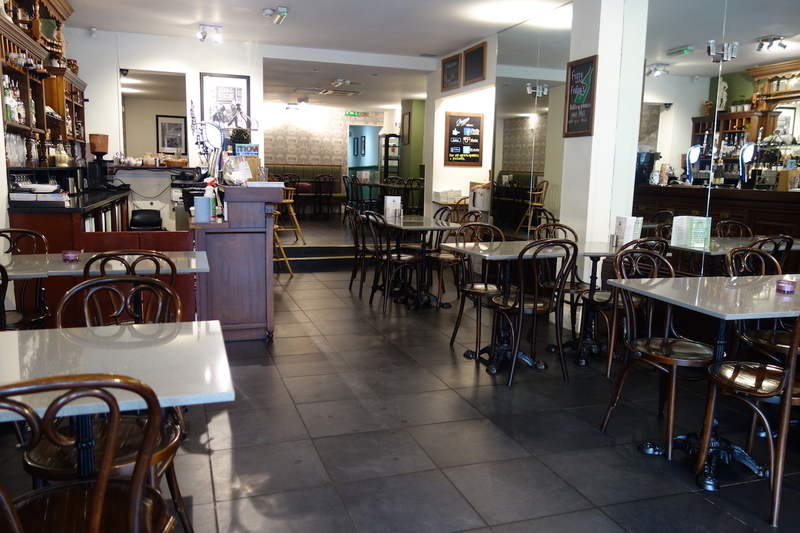 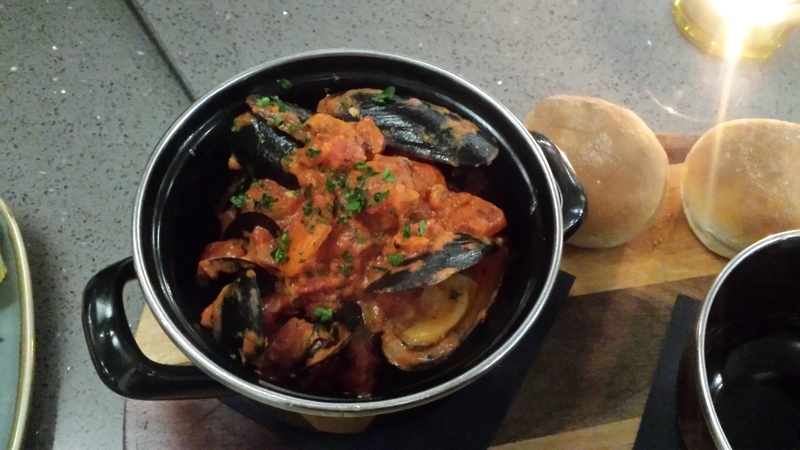 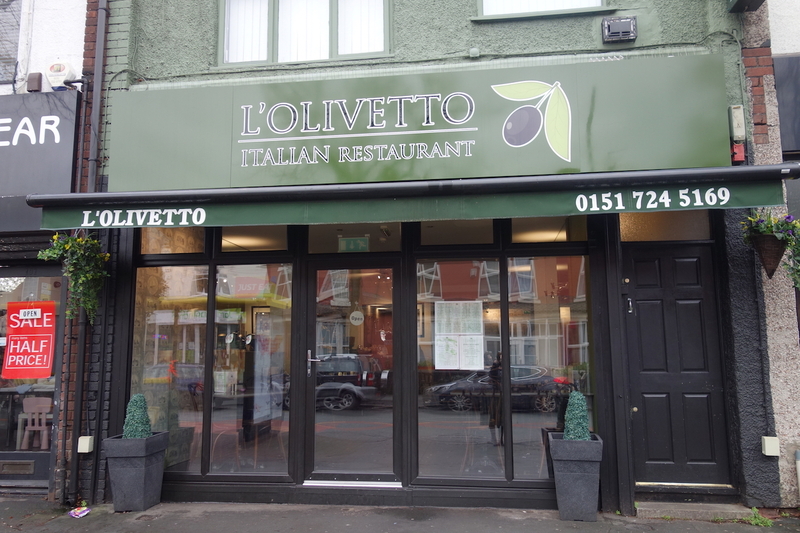 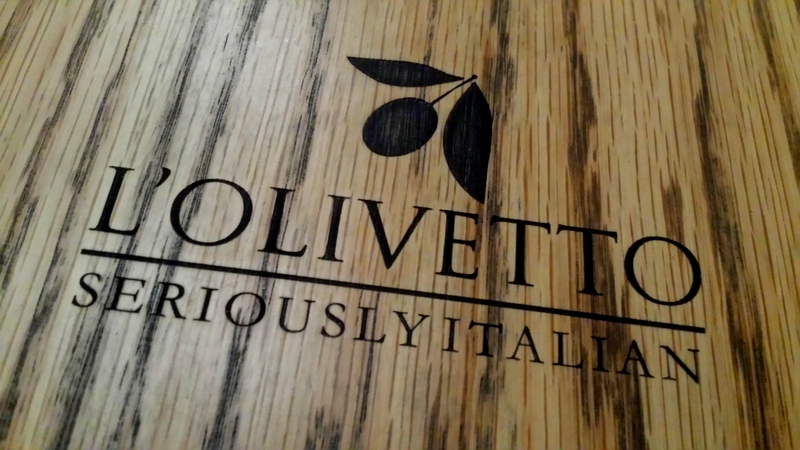 As we sat down, I instructed youngest to only order a starter, as I was determined to try a few Rose Lane eating places in one evening. However, this was a commandment that he immediately found troubling.

“They’ll think we’re weird,” he insisted, but I brushed off his concerns and ordered deep fried risotto balls with pancetta, a serving of calamari and a portion of mussels, all from the antipasti menu.

“They definitely think you’re weird,” he confirmed as I photographed the menu for note-taking purposes.

“Oh, it’s just me that’s weird now is it?” I queried, but his response was lost in a gulp of Coke.

With its hard edges, frosty lighting and all-over olive green tint, L’Olivetto didn’t feel the cosiest place to be on a chill January evening, but the food did its bit to warm us up.

The risotto balls were crispy and comforting, breaking open to reveal glistening strands of mozzarella and plenty of punchy pancetta, while the four deep-fried calamari tubes were a little salty but we slurped them down nevertheless. Then there was the gleaming black dish of mussels, a very generous portion for a starter, with its creamy tomato topping helping to warm our cockles, appropriately enough.

“I’m full,” said youngest as I swirled my schooner of Poretti Euro-lager and swallowed the last fragrant mouthful.

“That’s not really allowed at this stage,” I replied, and having stumped up for our food, we left L’Olivetto and went in search of a main course. 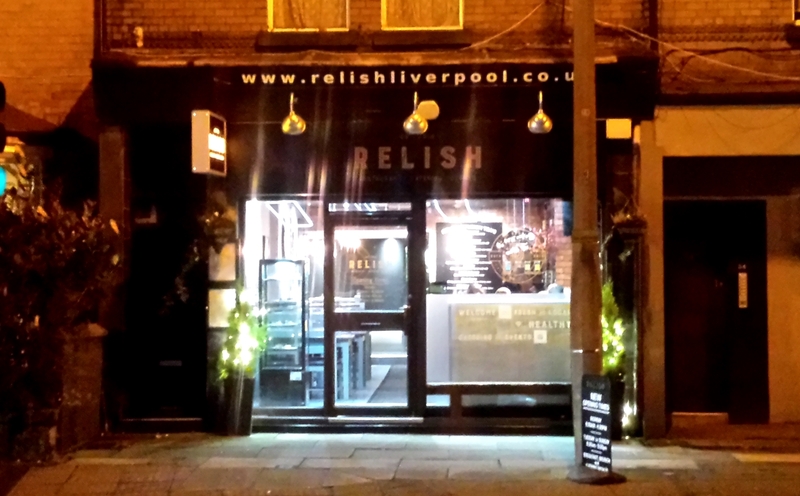 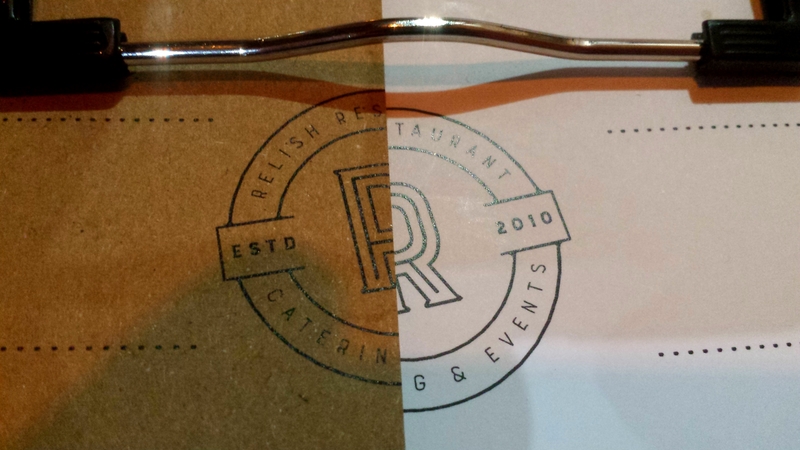 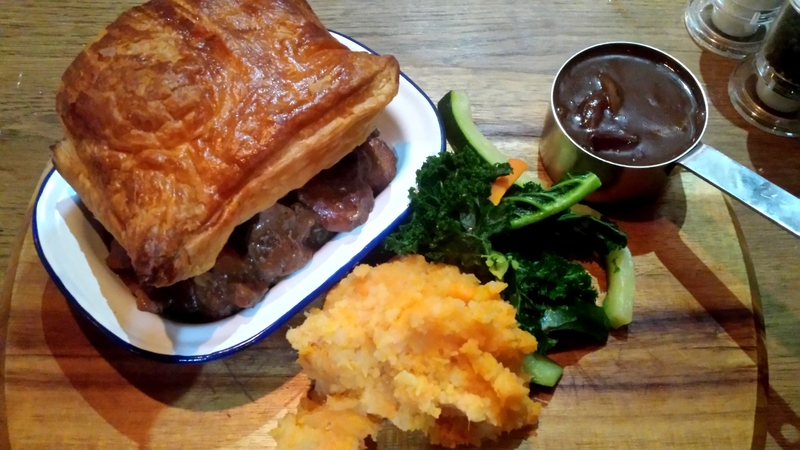 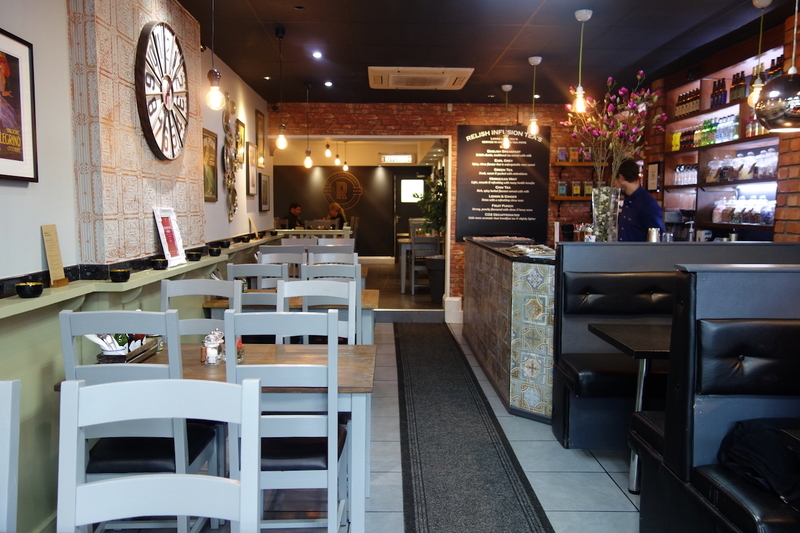 Minutes later we were enveloped in the welcoming hug of long-standing Rose Lane institution, Relish. Originally more of a buttie shop and refreshment stop than a restaurant, the place has evolved over the years into a bit of everything depending on the time of day – or a “bistro” to give it its official designation. Its opening hours have expanded and contracted, but for now it has settled into an 8.30am-8pm routine that makes it possible to head down for breakfast, lunch and evening meal so long as you’re happy to be turfed out at about the same time as Eastenders’ climactic doof doofs.

“Is LA in Las Vegas?” said a little girl to her dad.

Youngest chuckled and smirked at me in conspiratorial fashion, and I began to feel that the evening – and Rose Lane – was treating us well.

Lamb pie and sweet potato mash came from a menu of dependable everyday staples. It was served as a glutinous  meat stew in an enamel dish with a bulbous puff pastry lid sitting on top like a portion of Donald Trump’s (alleged) wig. Unpleasant image but a tasty pie.

My offspring’s halloumi burger with fat sweet potato chips was declared satisfactory too, although “the bread was a bit dry,” he said.

“I thought you were full?” I replied.

In truth, I felt the same way. My appetite was sated but I still didn’t feel we’d done Rose Lane justice.

“Let’s just go for a drink,” I said. And with that we headed off to Pi. 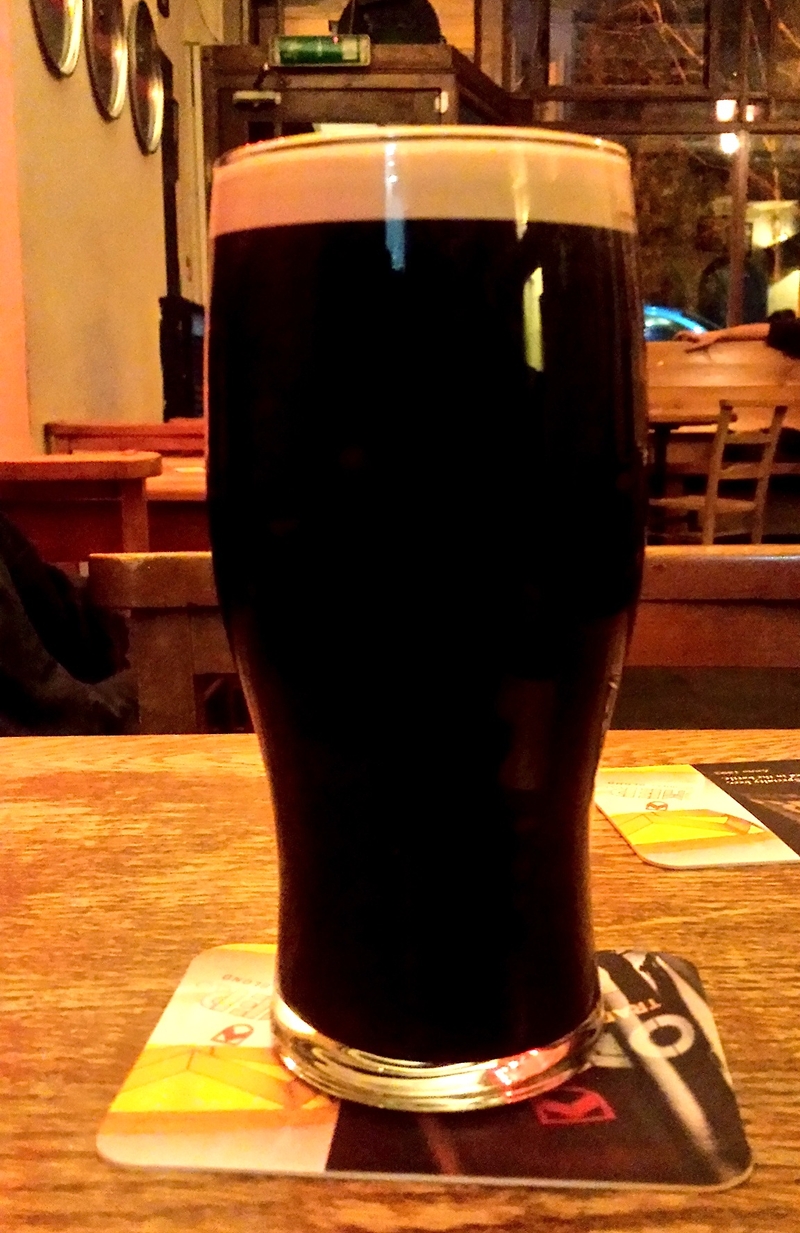 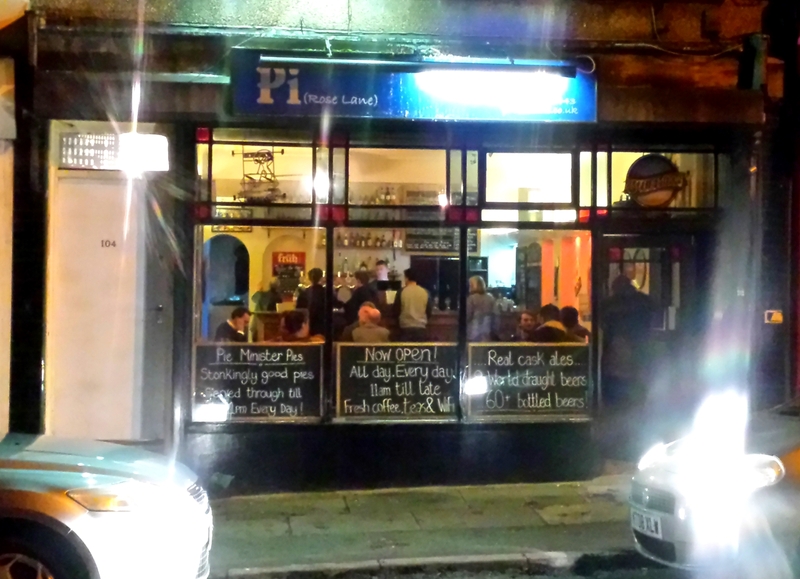 Located just past the station in what was once a cybercafé (remember them?), Pi on Rose Lane is the Liverpool outpost of Manchester’s Chorlton original. Inspired by Belgian beer bars rather than English pubs, it offers three cask ales, an array of keg taps, a bulging menu’s worth of bottled beers, and Pieminister pies for those who feel that an enormous quantity of pastry and mash goes well with pint after pint of ale.

I thought about the enormous pie I’d just eaten and then, taking leave of my senses, ordered a pint of Ilkley Brewery’s Hanging Stone oatmeal stout.

In many ways it made an ideal stand-in for a dessert, being fairly sweet and full-bodied with a rich roasted chocolate-milk flavour. But three sips in and I was struggling, suddenly highly aware of the quantity of liquid I had yet to transfer from the glass into my stomach. Gamely, I sipped on, but by the time three quarters of the black fluid was gone – swallowed, however much I wished it would evaporate instead – I could barely stand.

“Home time,” I gurgled, and with one of us bent double while the other did his best to look as if we weren’t related, we headed back towards the house.

Rose Lane has always suffered a little from being a through-route to Allerton Road or Aigburth Vale rather than a destination in its own right, and a number of its venues have changed identity more often than the England manager. But with both Relish and its neighbour Espresso Plus vying for the daytime trade, along with new coffee shop Wigwam catering for parents and toddlers, and Rose Lane Deli (next to the much-loved Chris’s chippy, lest we forget) offering those fancy bits and pieces you can’t pick up in Tesco Express, there are still a few reasons to stop and rest.

As we headed home, we passed the Antalya Turkish barbecue restaurant and peered in at its small collection of lonely souls.

“We’d have gone there for pudding if we’d had room,” I said.

And youngest looked at me in his teenager’s way.

The best rooftop bars in Liverpool with incredible views
● / Wine