It follows Theresa May's decision to call a snap election on June 8, conjuring up a potential game of political thrones in Liverpool.

Given Labour's strength across Merseyside it seems inconceivable that anybody but Rotheram, former bricklayer turned MP will be beaten in the election for city region mayor on May 4.

Although nominations for general election candidates does not expire until after the May election, the Labour Party has its own timetable for its own party candidates.

Rotheram, 56, had planned to await the outcome of the metro mayor vote before (assuming a win) deciding on the best time to stand down in his Walton constituency.

Until Rotherham (who until recently was Jeremy Corbyn's private Parliamentary secretary) won the Labour ticket for the city mayor election, the high expectation had been that Anderson would be chosen to run the race.

Another dimension in the saga is a rumoured fall out between Anderson and Rotheram.

Announcing his decision today, Mayor Anderson made if clear why he should take over the Walton seat in the House of Commons.

"More than ever at this time, national politics needs people with local government experience who understand how precarious the situation facing local councils is.

"I want to take my experience into parliament to not only protest against the cuts which local government is facing, but also to suggest the kind of innovative solutions we have been pursuing in Liverpool."

However, the leader of the Lib Dem group, Richard Kemp, warned that should Anderson be successful in his nomination, his party would be asking for the position of Liverpool mayor to be scrapped.

He said: "The fact that Joe Anderson is seeking to leave the council and become an MP confirms the view that we expressed at the budget meeting of the council that the Liverpool City Elected Mayoral position was redundant given the election of a City Region Mayor. If Mayor Anderson is successful in getting the nomination we will move a motion to remove the position at the first possible opportunity". 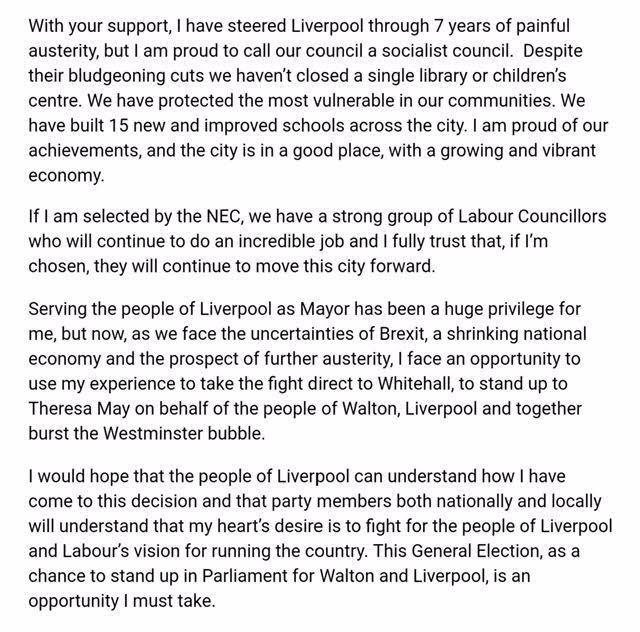