The sticky daylight gloom of Wood Street seems an unusual place to find an Italian Restaurant, but Villa Romana has stood there for longer than I can even remember. Despite its notable location, sitting pride of place between a couple of beloved Scouse institutions (by which I mean Popworld and the former Krazyhouse), this ancient Italian still remains a bit of an enigma to me. Unlike Casa Italia, its Stanley Street rival that has daily queues out the door, Villa Romana is not a name that comes up often in conversation.

The décor is like a Disney imagining of Italy

I’m an unbearable over-planner admittedly, but my preliminary investigations of their social media turned up little by way of information. My search for guest reviews, photos and check-ins was virtually fruitless and despite that, just twenty minutes after opening doors, the place was heaving. Is there some kind of secret Villa Romana Society I don’t know about it?

The décor is like a Disney imagining of Italy - it’s all dark wood, checkered tablecloths, paintings of the Tuscan countryside and terracotta jugs. The waiters are in crisp, white shirts. The menus are coated in plastic. It’s a textbook example of an Italian restaurant and I can’t help but love it. You want Italian? This is Italian with knobs on.

There’s a good, reasonably priced wine list that’s strict with Italian-only classics. A half litre of the house wine, a sweet and easy-drinking red, came in at only £9. Their highest priced a bottle of Barolo is around £45. The food menu is a little more liberal than the drinks and, despite being a family-run affair, isn’t quite as traditional.

They serve Spaghetti Bolognese, for example, rather than a traditional meat ragù. There’s cream in the carbonara. Our calamari comes with tartare sauce for dunking and, whilst I love fish and chips as much as the next born-and-bred Brit, a bit of aioli wouldn’t have gone amiss. Authenticity aside, the restaurant was utterly packed with what seemed like hordes of hungry regulars. Villa Romana is clearly giving the people what they want and who could blame them?

Staff are clearly used to catering for high numbers and the service is impressively speedy. I barely swallow my first gulp of ‘vino rosso’ before the starters arrive. The first, a bruschetta (£6.50) with tomatoes and basil, was probably the only dish I wouldn’t order again. The bread was too soft, the tomatoes too watery, the whole thing needed a good whack of garlic and a generous hand with some olive oil. Calamari fritti (£6.75) was much better. Coated in a really light, crisp batter it was perfect with just a squeeze of fresh lemon (no tartare sauce required).

Main courses had that family touch and came in generous servings. The cannelloni Villa Romana (£10.05) was a dreamy pool of molten cheese, silky pasta and spiced mince: a slice of garlic bread (£3.85) made the perfect utensil for scooping it all up. The scallopine di vitello saltimboca (£17.25) was a touch more sophisticated and a little easier on the eye - tender veal cutlets wrapped in slithers of salty Parma ham balanced well with a fresh lemon and butter sauce.

As a child of the 90’s I’ve never had the pleasure of a dessert trolley before but I’ll soon be fighting for their timely comeback. Hidden away in the kitchen it’s all too easy to decline a pudding but when they’re wheeled out in right in front of your nose I’d defy anybody to say no. The Villa Romana trolley was a riot of glacé cherries and squirty cream but it was a wedge of fluffy lemon cheesecake that eventually caught our eye. Okay so the whole thing was a bit old fashioned, granted, but I reckon that’s just part of the magic. 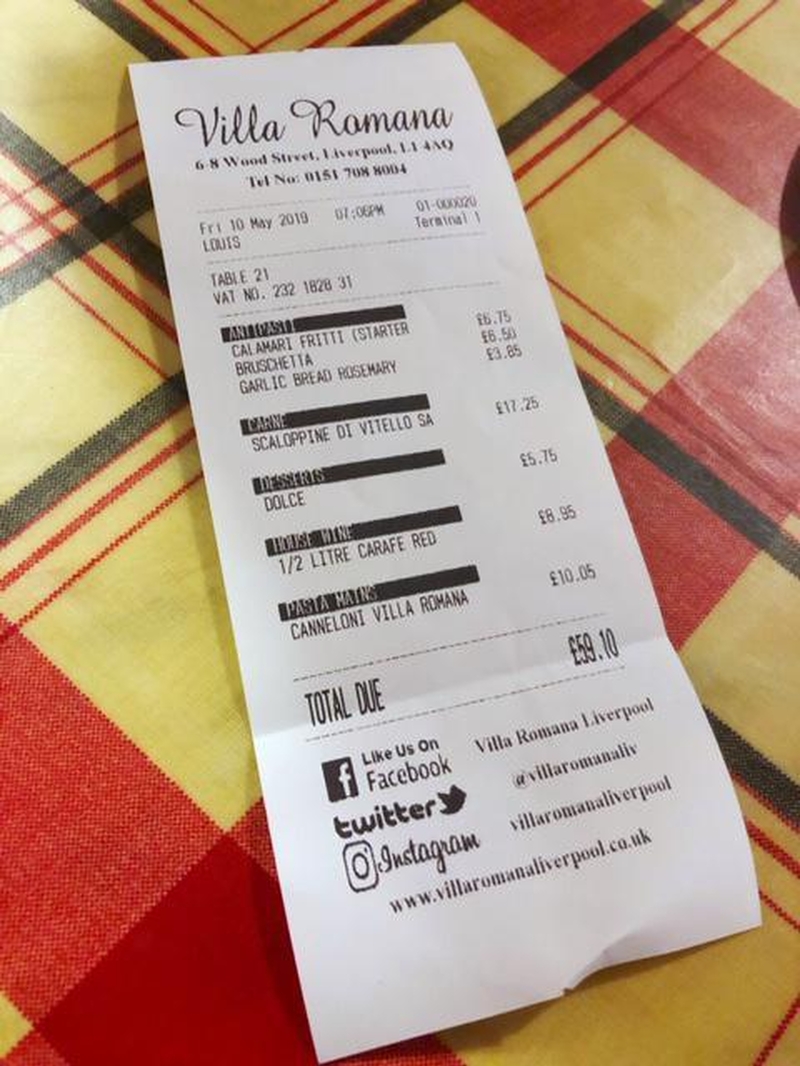