‘I felt almost sorry for the potato’ - Review: The Chancery

THE Chancery is a restaurant and soon-to-be delicatessen (to open before Christmas) located on the fringes of Liverpool One’s bus gyratory. It comes from the same team behind Bretta & Co, a similar but ultimately unsuccessful project, now permanently closed. It seems odd that they’ve chosen to include B&C photos on The Chancery’s website.

We’d made a Plan B reservation elsewhere just in case, given the patchy reports we’d had regarding Bretta & Co. Despite pushing pre-conceptions aside and entering with an open mind, we felt the ambience was slightly off kilter - although were unable to put a finger on exactly why. The background music was at a good level and the lighting, whilst dingy in parts, was adequate for dining.  Perhaps it was the slightly unfinished feel, with (presumably unintentional) gaps in the plaster, exposing brickwork underneath and starkly apparent wiring hanging from the ceiling.

The team are obviously limited with what they can do with Grade II listed premises, but there’s a palpable emptiness here drifting amidst the wooden floors, tables and Edison filament bulbs.  It had sat unloved and unused on the periphery of Chavasse Park before sitting lonely for a while after the Liverpool One development. There are now apartments and two restaurants sharing a rather handsome building, but The Chancery somehow doesn’t make the most of it. 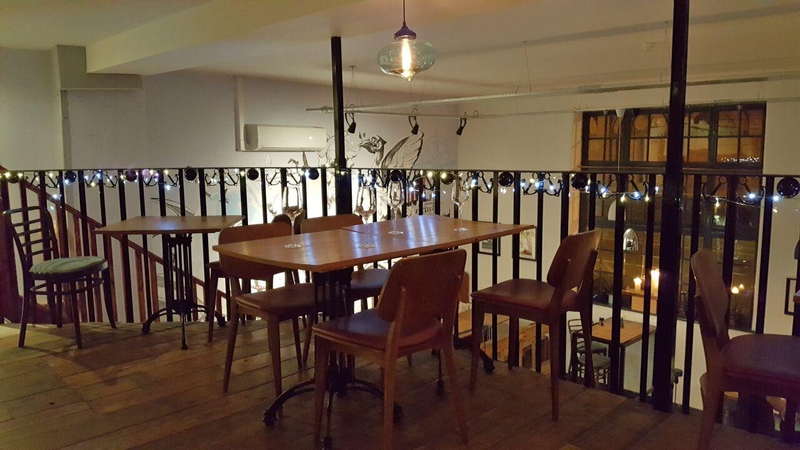 Down to brass tacks; the service was very good - although a Monday night might not the best litmus test. The waiting staff numbered a solitary lady, who was working the bar and the floor on her own with occasional assistance in the form of disembodied voices from the kitchen.  However, she held the front of house fort brilliantly, with a pleasant attitude in a direct, uncomplicated style.

For a restaurant with a soon to open delicatessen, the wine selection seemed limited.  There wasn’t a single choice from the new world. Six choices apiece for white, red and sparkling doesn’t seem enough, although hopefully this will grow once Chancery finds its stride with the off-license trade.  The beer selection was reasonable, with a handful of lagers plus a pale ale or two, but the remainder of the drinks selection was driven by an ample cocktail menu at £8.50 a pop.

Chianti Volpetto Sangiovese was reasonably priced at £24 per bottle (along with the rest of the wine menu, to be fair) with a brisk tannic acidity which paired well with the red meat in our main courses.

A bistro menu runs until 8pm and the á la carte starts at 6pm, so fussier diners take note of the two hour window where there’s a wider choice available.

We went á la carte, although starters didn’t do a huge amount to settle our early uncertainty. Both dishes were delivered in a timely manner, but presentation was not the best.  A lukewarm wheel of camembert (£6.50) was solid in the middle, with only the outer edges reaching that satisfying gooey texture.  No attempt had been made to add dimension; no garnish, no roasted garlic cloves, no rosemary; just the cheese in a ceramic tapas bowl next to a couple of slightly long-in-the-tooth slices of bread.

Florentine baked eggs (£6.85) - sat in a buttery puddle of mushrooms - also looked in need of some beautification.  Two of the three eggs were cooked solid but were perfectly seasoned and the spinach and shallots were tasty. Unfortunately the thinly sliced bread was too unsubstantial to be used as intended in mopping up the bowl.

We were not entirely hopeless that things weren’t going to improve and thankfully, they did. A little.  The herb encrusted rack of lamb (£18), whilst still carrying a hefty portion of fatty gilding, was cooked perfectly and tasted full, gamey, savoury and earthy.  The accompanying ratatouille was fine and the pleasant enough jus was too polite to be called gravy.

Surf and Turf (£28) was the best dish of the evening; a buttery and sweet lobster tail sharing space with two generous prawns ready to be de-shelled. The offer to remove the carapace from the lobster tail would have been better before they brought it over, but it did give me the chance to decline and get stuck in.

The turf element was a thick fillet steak carrying a sweet interior enclosed by a caramel and smoke laced outside.  The lowest note of the evening sounded with a side dish of chips (an extra £3.50) I felt almost sorry for the potato that had given up its existence to be turned into thin and flaccid shards, tasting mainly of cooking oil.

The accompanying paella was okay but a little out of place, even for a generous ballast.  Again the jus was too thin, and served confusingly in espresso cups rather than a small jug. However, portion sizes are generous and sadly we couldn’t find the space for dessert.

The Chancery needs more time to cut its teeth on the Liverpool crowd, but there is some promise there. Time will tell if the delicatessen becomes a solid asset to the city, given the competition in the area of gourmet provisions. Some minor misdemeanours and sloppy touches are addressable, but we were left to ponder if the quality of the dishes will normalise.