THEY call it the theatre that refuses to die. From The Empire, Royal Court and Everyman / Playhouse to Hope Street Theatre and The Unity, Liverpool is fortunate to boast some of the best theatres in the North West; ney, the country. But none has played such a dramatic role as our much-loved Epstein Theatre. Now, the historic venue on Hanover Street is entering a new chapter with a new management team at the helm.

Epstein Entertainments Ltd is a joint venture between Liverpool producers Bill Elms, Chantelle Nolan, and Jane Joseph. The theatre will retain the same name and continue to run as a variety venue with a mixed programme of entertainment. The creative team’s plans already include a Christmas pantomime this festive season, which will be announced and on sale this week.

Against all the odds, the Epstein, previously the Neptune and before that Crane’s, has been the little theatre that just refuses to die. It has faced the prospect of closure several times in its more-than-a-century life.

It originally opened in 1913 as Crane's Music Hall above the musical instrument store opened by the Crane brothers. It changed its name to the Crane Theatre in 1938.

Threatened with closure in 1966, the theatre was purchased a year later from Cranes by Liverpool Corporation. They renamed it the Neptune and decided that the theatre should be run by local people for local people.

Lights out beckoned again in 1993, but there was a huge campaign by Dame Judi Dench to save the then Neptune. In 2005, due to health and safety reasons, the theatre closed, and remained shut for five years, re-opening after a £1m refurbishment in 2011 with a new name, the Epstein, to honour the memory of the late Beatles manager (who, incidentally, once ran Crane’s big city centre rival NEMS).

In 2017, administrators were called in to work on a financial restructuring plan with Liverpool City Council after the Epstein fell behind on its rent. It was this investigation which brought to light the fraud committed by assistant manager Kelvin Lloyd, who stole £273,000 from the theatre over a 21-month period.

The venue closed its doors in March 2020 as part of the government national COVID-19 lockdown, and will now reopen under the management of the new team.

Bill Elms will become the venue’s new artistic and communications director. Bill has more than 30 years’ experience in the entertainment industry and as well as his PR roles with Bill Elms Associates, and theatre producer under Bill Elms Productions, he also created Liverpool Theatre Festival, of which he is artistic director.

Bill said: "This is a venue I have loved with a passion for so many years and is one of Liverpool's leading historical and cultural gems. I’m excited to play a part in both strengthening and reaffirming its future, with a vision to establish the venue among the most prolific theatres in the industry.”

Chantelle Nolan, who is currently general manager at St Helens Theatre Royal, is the new artistic and operations director at The Epstein Theatre. Along with her mother Jane Joseph, she is one half of the hugely successful Regal Entertainments Ltd which has run St Helens Theatre Royal for the past 20 years, as well as producing top quality drama, comedy, and panto productions which have toured extensively.

“The Epstein has amazing potential, and we’re absolutely committed to presenting a quality programme of music, comedy, and children’s shows, as well as building on the family pantomime and exploring longer running shows for Epstein audiences.”

Jane Joseph, added: “This is a very special moment for me. I produced my first ever pantomime, Aladdin, at the then Neptune in 1994.

"I’m incredibly excited that 25 years later, to be coming full circle and returning to the theatre where it all started for me – this time as part of the team running the venue. The Epstein is a theatrical jewel and I’m looking forward to helping it continue to sparkle.”

Read again: Top things to do in Liverpool and beyond: October 2021

Sound as a pound or bag o'shite? Have your say on the Liverpool markets
What you say
Previous Article Next Article
Read Next
● / Things to Do 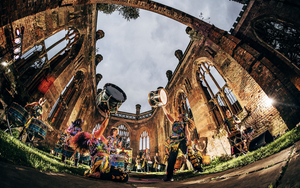