Damon Fairclough tiptoes through the tulips, oil drums and graffiti in search of a whole lotta gin

IF you dig around in the nether reaches of the BBC iPlayer, you can often unearth a few interesting archive treats. I recently spent a fading Sunday evening doing just that, and found an old episode of the arts strand Omnibus, first broadcast in 1976.

It was called New York, New York, and featured a film about the burgeoning creative scene in Soho along with a report about graffiti’s unstoppable creep.

This graffiti wasn’t like the painted sloganeering of Paris ’68 or the spray-canned football banter of 1970s Britain. This was something new involving elaborate, coloured artwork, stylised lettering, and the indelible tagging of every monument, wall and subway car.

The report was full of young kids in flares wielding marker pens, smirking and sniggering as a British film crew caught them in the act.

For gin-lovers in Liverpool who tend more towards touchscreens than Titchmarsh, the rebirth of this seasonal retreat is cause for celebration​

It’s just a shame that in 1976, no one could have told them that over 40 years later, a Liverpool “gin garden” would serve £7.50 martinis in an environment looking exactly like the brick-strewn parking lot they’d just vandalised. Their response to this unexpected artistic legacy would have been interesting to say the least.

Now, of course, that New York graffiti style of the 1970s and 1980s is ubiquitous, whether applied unofficially or executed as a design statement by those who crave a bit of edgy, urban chic. Over the past four decades it has meandered between criminal damage and street art, and at the Botanical Garden, in Liverpool’s Baltic Triangle, far from being seen as an anti-social scourge it forms the backdrop to all manner of roofless, booze-soaked goings-on.

Hidden behind a door made of, er, doors, Botanical Garden on New Bird Street is not actually a “garden” in the sense that the grandparents would have understood it. To them, an arrangement of oil drums, chipboard and spray-paint would not have been worthy of the same designation as the Babylonian hanging variety.

But for gin-lovers in Liverpool who tend more towards touchscreens than Titchmarsh, the rebirth of this seasonal retreat is cause for celebration. Having reopened in March after its winter slumber, the venue is currently warming up for a summer-long party that will see it serving cocktails and good times right through till October. 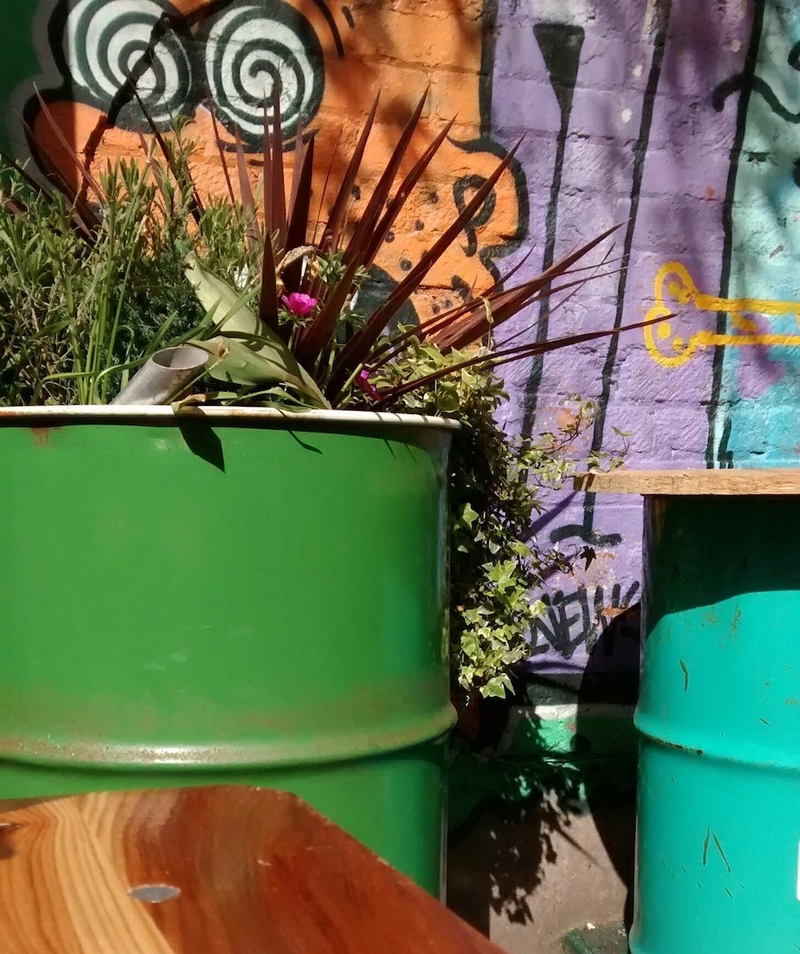 When I pay a visit, the sun has broken free of its meteorological moorings and is doing its best to bake the Baltic Triangle – as much as is possible in early April, at least. With so much sun, conditions are near enough perfect, although a chilly spring breeze means only the brave have unzipped and discarded their jackets.

It seems that layering is as important in hipstery drinking dens as it is on the Eiger’s north face.

As is the modern way of things, Botanical Garden has a rough-hewn, handmade quality that helps enhance its “secret” vibe. In reality it’s about as secret as Smokie Mo’s, being a social media-powered commercial venture that needs beards on seats to keep the gin flowing. But, as with the Kazimier Garden, the sense of concealment behind industrial hoardings does make it a pleasure to step inside.

The cocktail menu offers plenty of ways to order gin that don’t involve just saying “…and tonic” every time. Under categories that include “Refreshing”, “Serious”, “Unusual” and “The Cure” (presumably gin-based remedies for having drunk too much gin), there are long, zesty coolers and shorter, punchier recipes. 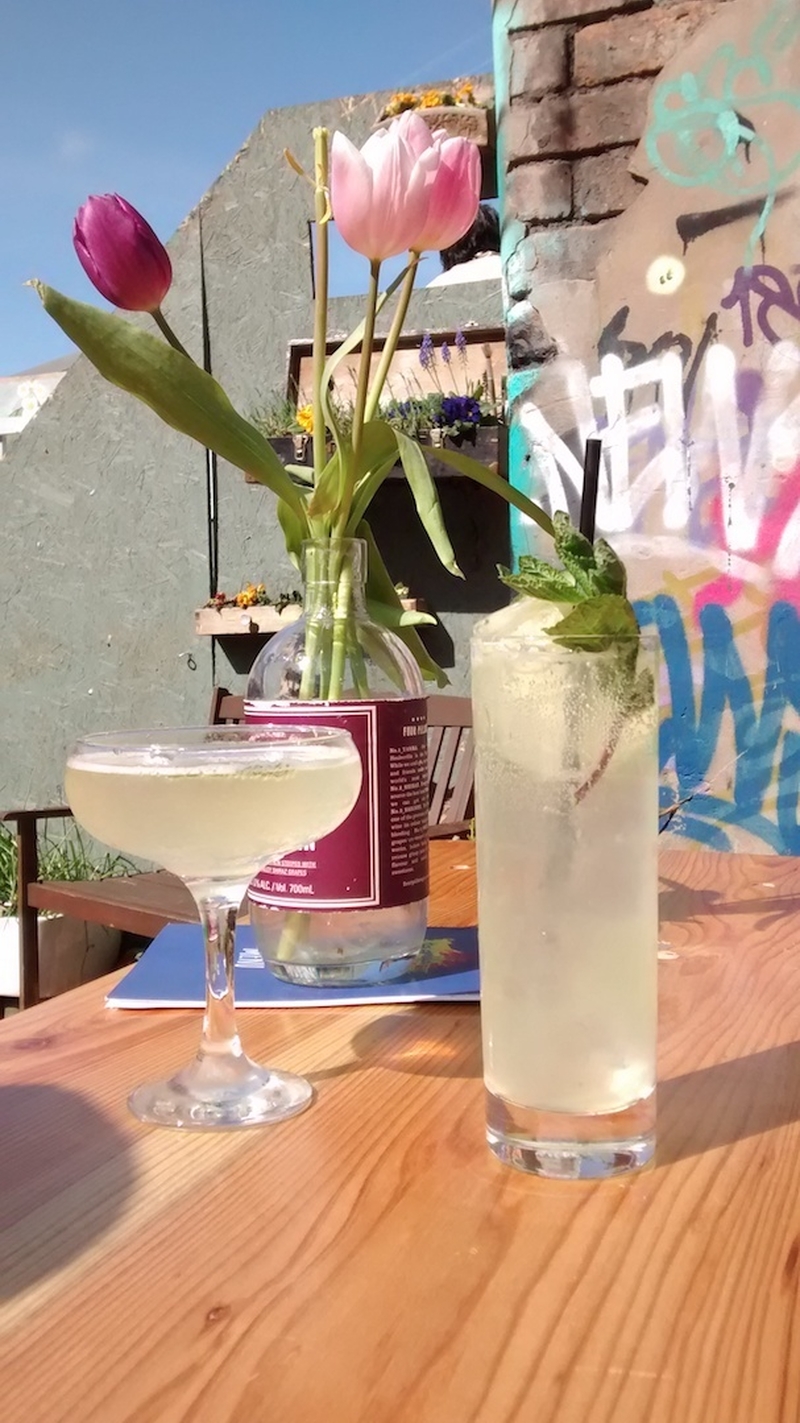 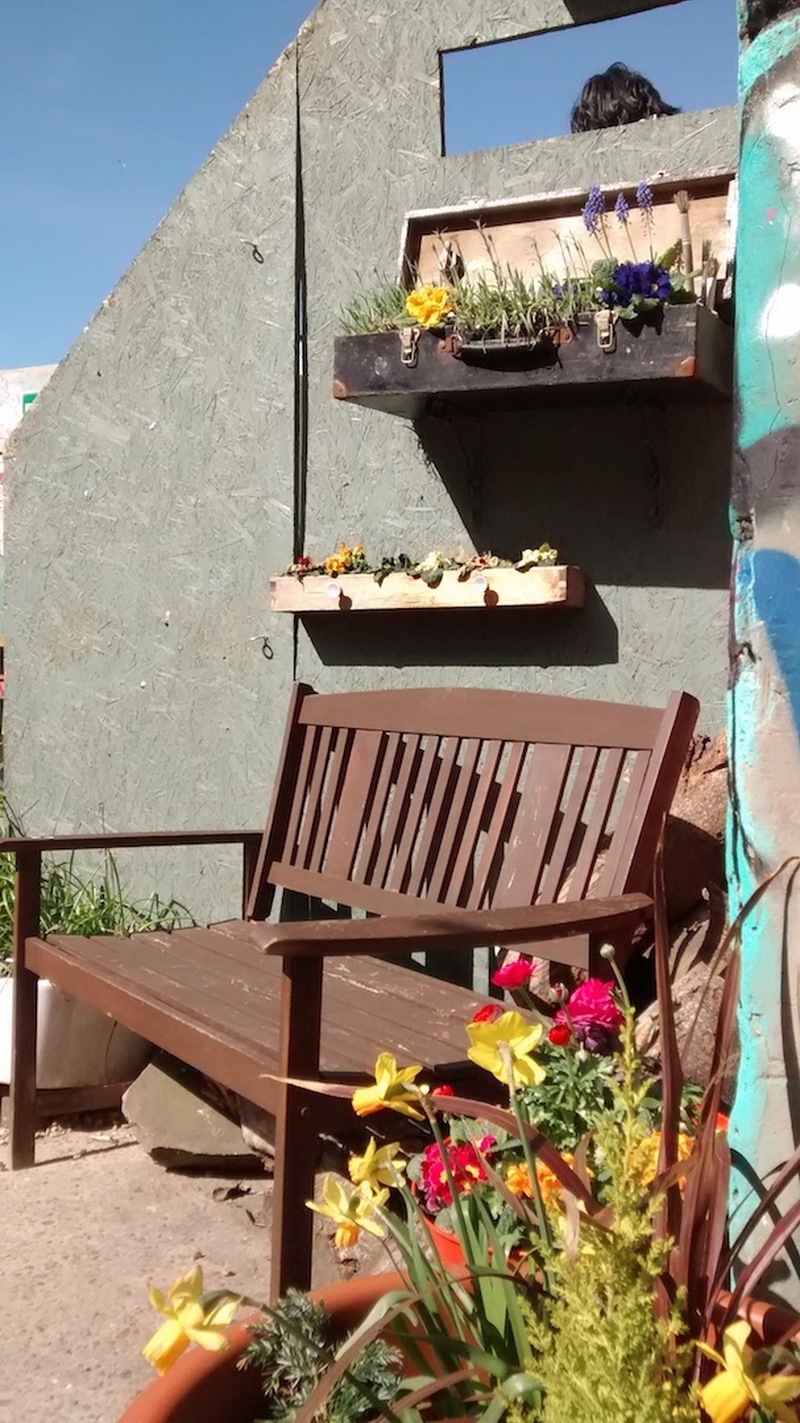 Choosing from the “Refreshing” category, the East Side Fizz (£7.50) is a mash-up of gin, lemon and sugar and topped with cucumber – the devil’s solidified snot.

However, through some mysterious alchemical transmutation, the cucumber fails to render it undrinkable, and instead lends it a delicacy and freshness that helps the drink disappear far too fast.

Also billed as a refresher, the Prin Fizz (£7.50) is described by my accomplice as “like being on holiday, by a river, on grass, watching posh people play cricket”. With its dose of JJ Whitley elderflower gin and a prosecco topping, it’s tart and lightly astringent, perfect for anyone who thinks of cocktails as being unpalatably sweet.

Although Botanical Garden was here for the 2016 season, there have been a few tweaks this time round, one of which is the arrival of new city falafel specialist Ta’amiya. Cooked up by Michael Carey, formerly of Puschka, this street food outlet lurks in the corner of the yard and serves a selection of “just enough”-sized portions featuring falafel (naturally), spiced lamb or meatballs, along with some tempting sides.

The Mayan Wonder (£4) is also good, combining Mexican and North African flavours together with falafel that are on the fluffy side rather than being over-dense. And the chips (£3) are fantastic, as good as any French frites van, with a generous squiggle of garlic mayo for good measure. 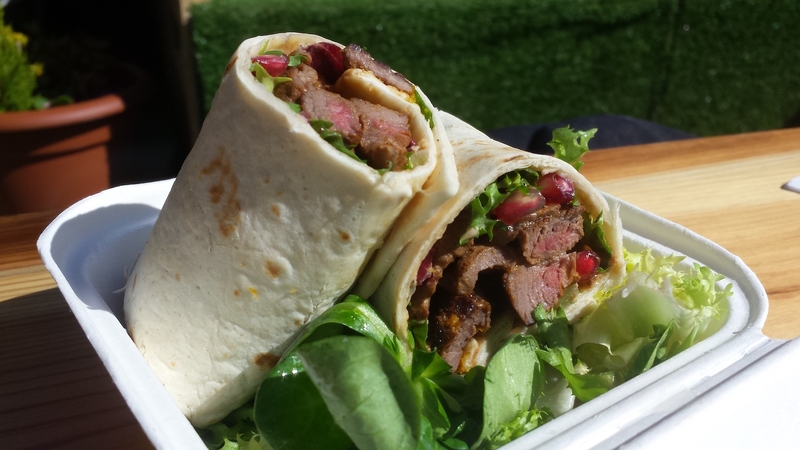 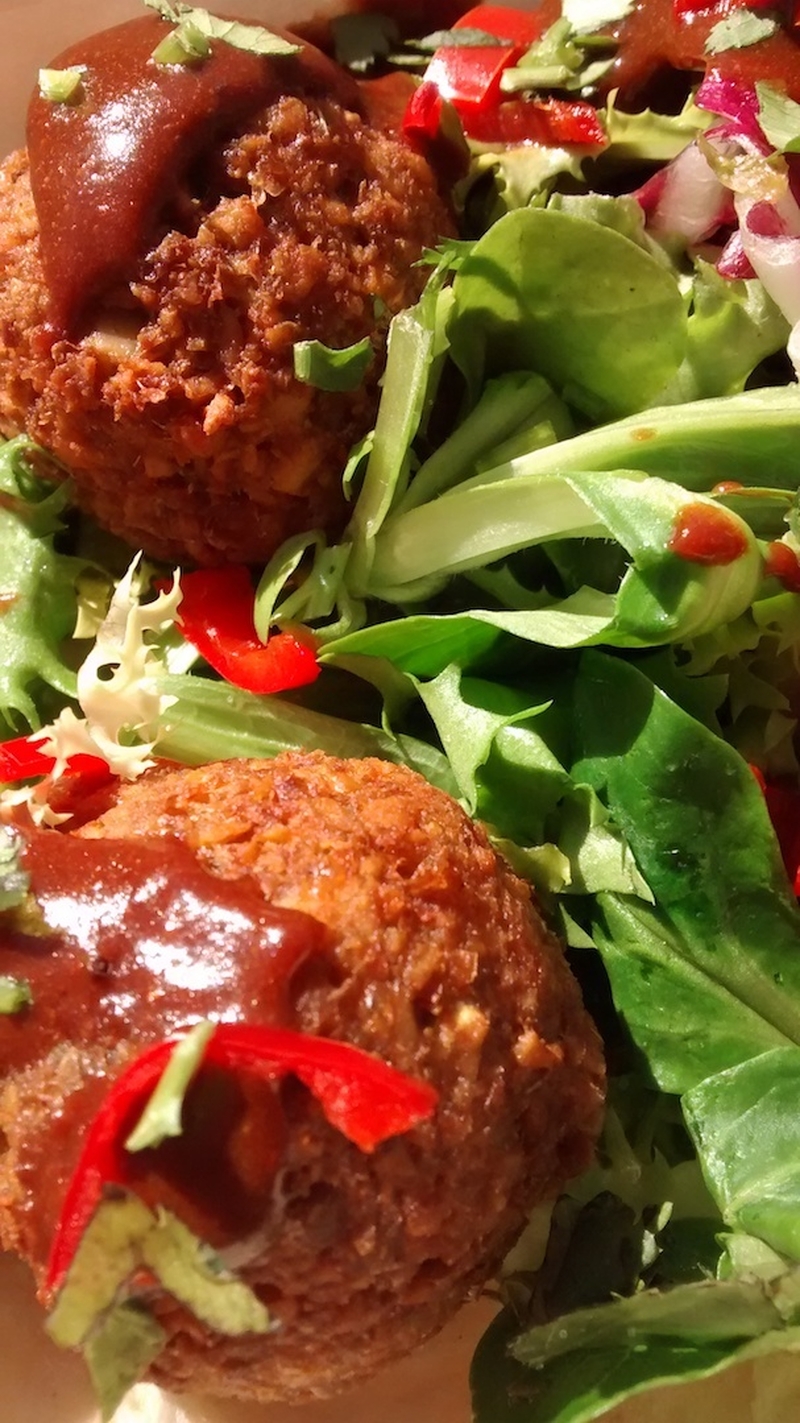 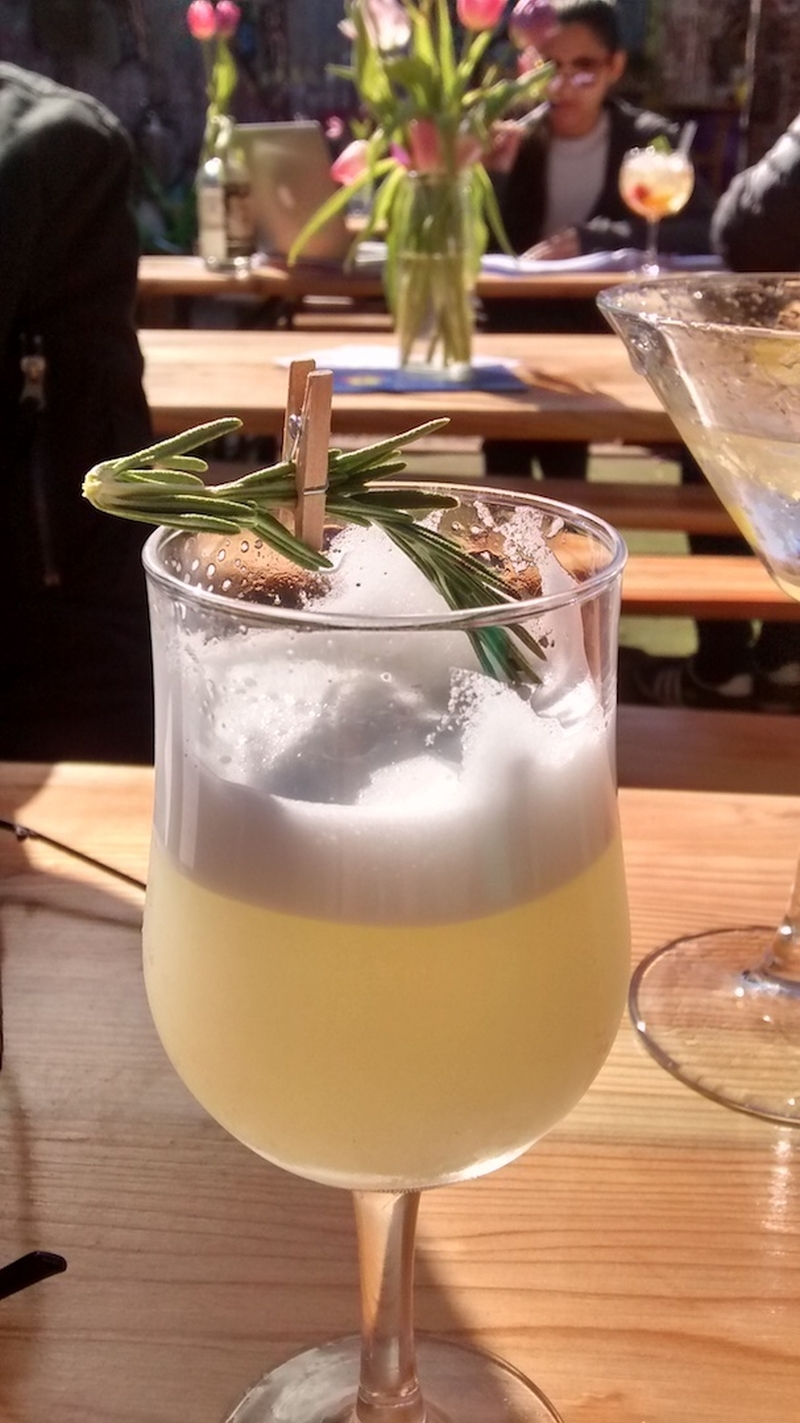 Back to the cocktails, and the “Unusual” category throws up a quirky specimen called The Very Last Word (£7.50). Smelling like a lemon meringue pie and served with a twig of rosemary pegged to the glass, this is a concoction of gin with lemon, sugar, and green Chartreuse – oh, and maraschino liqueur and egg whites. Less sharp than our other choices, this is an irresistible dessert in a glass.

And I couldn’t leave a dedicated gin garden without sampling their martini (£7.50), which, in this version, involves Plymouth gin and is served with a length of lemon zest lurking in the glass like a fat yellow slug. On the nose it’s like something you might buy to use in the shower, on the tongue it’s like walking through the Debenhams perfume department and being sprayed by the atomizer-wielding hordes.

Well, actually, these cocktails don’t come cheap, but then cocktails never do. However, there are more modestly priced bar offerings too, and the food is definitely good value.

And then, of course, there are the salubrious surroundings to consider – the platinum chandeliers, the titanium wash basins, the tables edged in gold.

On second thoughts, scratch that. A graffiti-splattered downtown hidey-hole powered by the spirit of near-bankrupt 1970s New York is as good a place as any to drink away your cash.

The Botanical Garden won’t be around for ever. So put down roots there and photosynthesize while you can.

The Botanical Garden 5 New Bird Street, Liverpool. L1 0DN. Noon until late every day until October.  Find it on Twitter and Facebook (and find Ta’amiya street food on Facebook too).