In Liverpool you are never far away from The Beatles

THERE is no escape from the Beatles. Not in Liverpool anyway.

It wasn’t always thus. In the late 1970s, Liverpool was still a relatively carefree place with just one shop (in North John Street) selling Fab Four memorabilia to a few anoraks. Meanwhile, power pop and punk danced to a different beat along Mathew Street.

Who could know that the sudden death of John Lennon in 1980 would spawn a whole industry and, a generation on, would, arguably, come to define the city’s image?

Now folks safely living in zones beyond the daily Magical Mystery Tour route can expect regular close encounters too, in the form of a new series of buses emblazoned in Beatles regalia of the psychedelic kind.

Arriva has transformed four of its double deckers into John, Paul and George and Ringo-themed buses, gegging in on the release, 50 years ago, of the Sgt Pepper album.

The churlish among you might think the international transport conglomerate could have celebrated, instead, by cutting the fares to 1967 levels.

But no. Arriva even persuaded four of its drivers to dress in Sgt Pepper outfits for the launch, complete with mop-top wigs sourced, one might suspect, from a dawn raid on a dog grooming parlour.

In June, Liverpool City Council’s so-called 50 Summers of Love celebration saw the Beatles at the heart of dozens of events. The Sgt Pepper album was dissected, song by song, over an entire month or more, in public-funded commissions by international artists such as Miaow Miaow and Jeremy Deller. However even the most dedicated lover of the group may have found some of it rather wearisome.

On the other hand, they wouldn’t do it if no one was interested and fans from across the world continue to head to the mecca that Macca and the boys first put on the global stage when they landed in America with their curious scouse accents in 1963.

Back here on the Mersey, it remains a nice earner for some. In the minds of those employed in the marketing, cultural and tourism industries, the group, which was over when its members were all still in their twenties, will be forever “toppermost of the poppermost”. Especially, when it comes to paying the bills in a city reliant on leisure and public sector earnings. 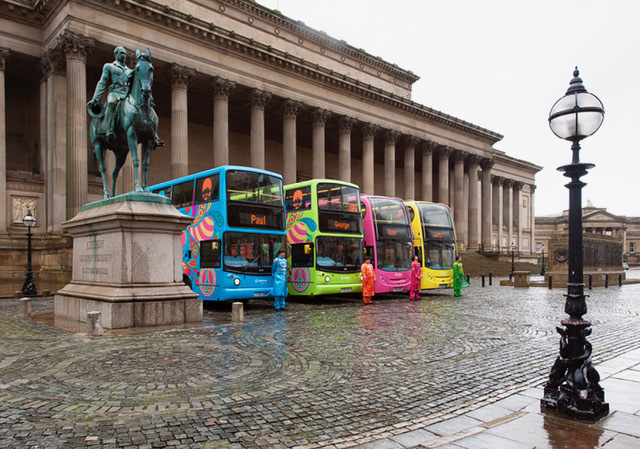 There are some citizens, lovers of the band included, who feel Liverpool relies too much on its maritime and Beatles affinities and should spend its energies innovating instead of looking back.

The rest of you, fear not: as the miserable autumn weather sweeps into the city, the sight of a kaleidoscopic 81 bus sailing up Queens Drive to Bootle in the morning rush hour does not necessarily indicate a helping of magic mushrooms on toast for breakfast.

Arriva says as well as celebrating the 50th anniversary of Sgt Pepper’s Lonely Hearts Club Band, the buses are also a nod to Liverpool’s UNESCO City of Music status and the upcoming 10 year anniversary of European Capital of Culture, which is bound to be marked with similar enthusiasm in 2018.

Each member of the Beatles has been given their own dedicated bus, with the vibrant colour schemes matching the outfits each wore on the album cover.

Councillor Wendy Simon, Liverpool’s Cabinet Member for Culture, said: “Our 50 Summers of Love has been a huge international success and as a UNESCO City of Music, Liverpool can be immensely proud of the way it celebrated the creative spirit of 1967 and the Sgt Pepper’s Lonely Hearts Club Band.

“Since The Beatles followed up Sergeant Pepper with the Magical Mystery Tour I can’t think of a better way to see out our 50 Summers of Love than with these new fab four Arriva buses. We can't wait to see these psychedelic double deckers journeying their way through Liverpool.”

Howard Farrall, managing director at Arriva Merseyside, apparently added: “With a little help from our friends at Culture Liverpool, bus travel with Arriva is getting better all the time.”

Next stop: The I Am The Walrus Card.