Tried & Tasted: Which meal deal is the real deal?

The Big Five go head to head over one week of sandwiches, snacks, and drinks.

It’s difficult to think of another food and drink phenomenon that’s had the same impact as the Meal Deal. While fairly straightforward on paper, the idea of a capped price set menu/packed lunch hybrid captured the hearts and imaginations of service and administration sector workers, causing the most seismic shift in our nation’s leisure habits since Orange Wednesdays came along.

Throughout the years, various other shops and supermarkets have imitated the format, offering their own set-price combinations of a sandwich, snack, and a bottle of pop in the hopes of clawing back some lunchtime traffic from Boots - big players like Sainsbury’s and Tesco, as well as the quality-focused Co-op, and most recently, M&S. But which meal deal is the real deal?

To find out, I ate a meal deal every lunchtime for one week, scoring each retailer on the range of product available, the value for money offered by their deal versus the individual cost of the items, and the overall quality of what I ate. Just think of it as the world’s most boring cover of Craig David - Seven Days... 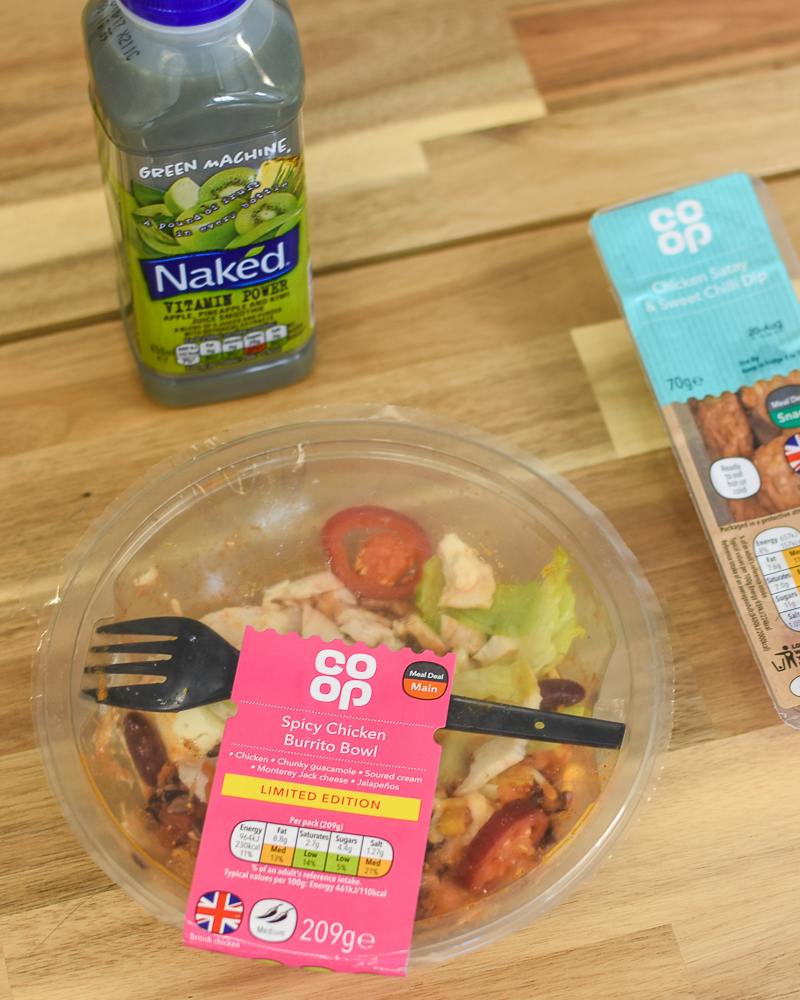 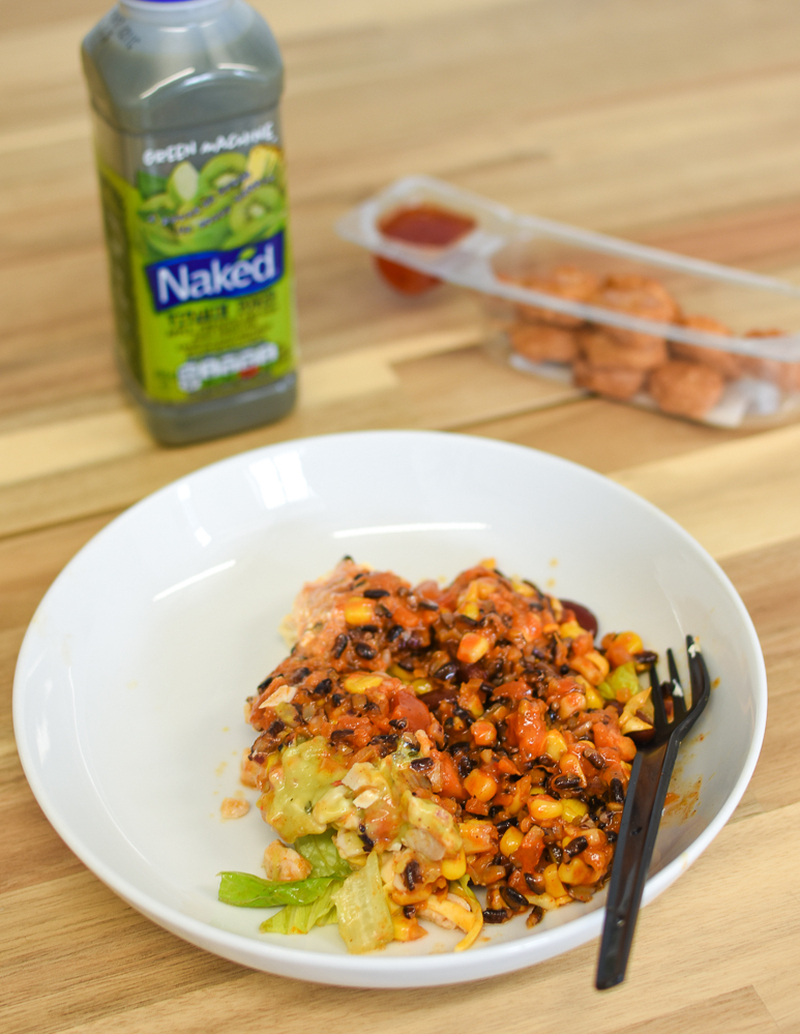 The joint-most expensive, coming in at three and a half quid, Co-op’s Meal Deal is one you’d splurge on the week after payday, before checking your Monzo balance and downgrading to homemade couscous or cup ramen for the rest of the month.

What kind of bang do you get for your extra (half) buck though? Well, there’s an assurance of premium quality that comes from regional-accented voiceovers on Co-op adverts, saying things like “fair trade” and “British farms”. There’s also loads of choice: I’m talking almost 30 sandwiches, as well as pasta pots and salads for the main, and snacks like fruit & vegetables, yoghurt, charcuterie(!!), scotch eggs, and cakes on top of the usual crisps and chocolate bars. With this being a Monday (New week new me hun) I went for a light option of a grilled chicken burrito bowl which, on the right crockery, could pass as something with a wanky name like a “clean bowl” at somewhere wanky like Filmore & Union, and fetch about £8.

Combined with a green smoothie (usually £3 a bottle, which seems like a lot for liquid compost) I went into the afternoon feeling invigorated having smashed about four of my five-a-day. In hindsight, it was probably a combination of saving £3.29 and a mild sugar rush from the sweet chilli sauce with my chicken satay. 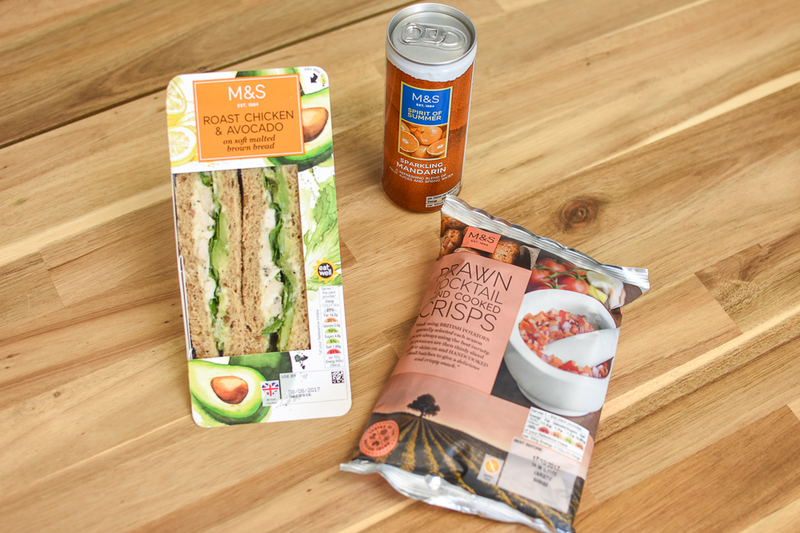 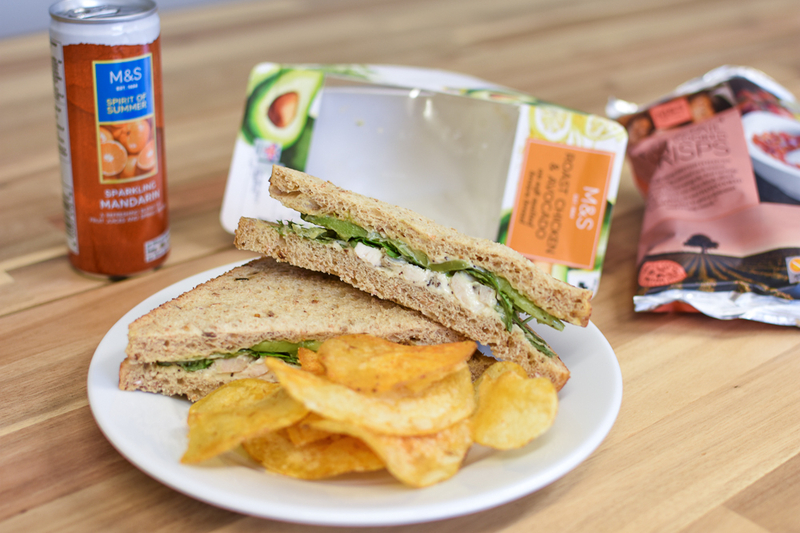 Look, M&S. If you’re not going to play properly, then just don’t bother playing at all.

M&S, the undisputed champion of seasonal ranges that go above and beyond; the home of brands that capture our hearts effortlessly. A merger of M&S and the meal deal format feels like a match made in heaven. It could’ve, should’ve been a new institution.

Instead, it’s a dozen phoned-in sandwiches paired with a core range of crisps and drinks. Admittedly, the chicken and avocado sandwich was - technically speaking - the best butty I ate all week, and a cameo from the Spirit of Summer range’s Sparkling Mandarin drink was a welcome addition to the promotion, but who’s going to come back lunchtime after lunchtime for the same sandwich and some own-brand pop and crisps, just to save 74p?

Add a couple of salad pots - leaves, grains, orzo, anything - some snack-size versions of Percy Pig, or those big packets of crisps, or those 2 for £4 tubs of rocky road, and we’ll have a meal deal on our hands. But right now M&S have turned up to a gunfight, and they’re only packing a ham sandwich. 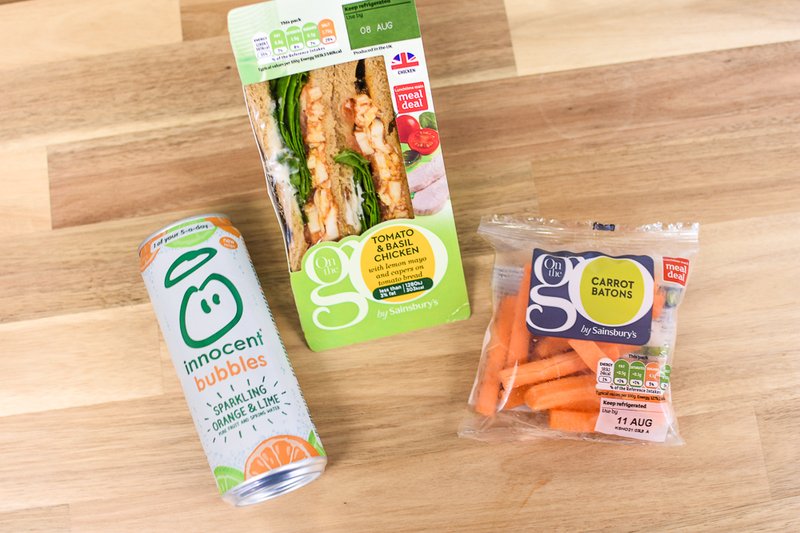 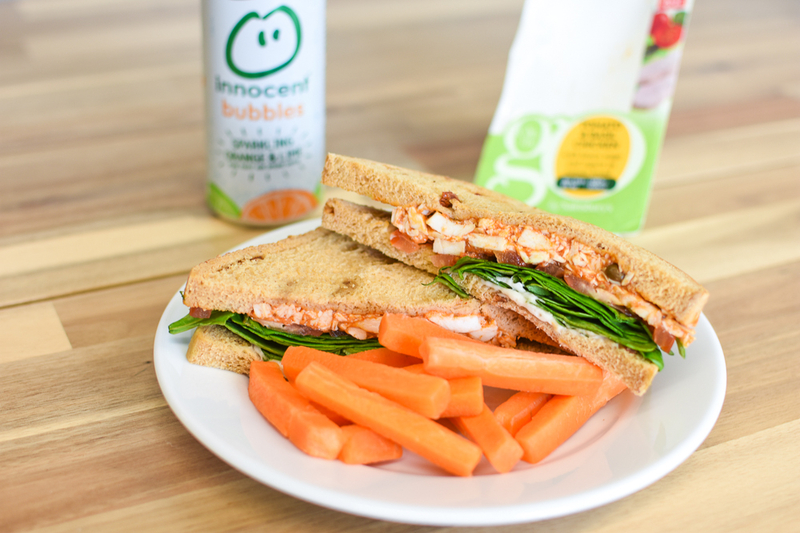 Three pounds might sound like good value for a lunch, but that doesn’t take in one considerable hidden cost: your dignity.

Chicken and sweetcorn. Egg and tomato. Seafood cocktail. Justifiably maligned sandwich fillings that make up the ragtag roster of Sainsbury’s meal deal mains. Nobody has ever sat at their desk at 11:46am, watching the clock in anticipation of being able to go and treat themselves to a ham and mustard sandwich. These are merely ballast to keep the proletariat functioning, while denying them simple pleasures like caramelised onion chutney, trendy hot sauces, or hummus. The worst part, though, is that the premium sandwiches - the BLT’s, the New York style pastrami, the Korean beef buns - are stored in the fridge right next to the meal deal range. So close, yet so out of reach.

And so, in order to save a quid, you're forced to stand right there amongst the free-folk, unshackled by the confines of the offer. I've never felt such humiliation. So, is it worth the complete erosion of your self-esteem? Is it ffff...ocaccia. My £2 tomato & basil chicken sandwich was the most expensive option included in the offer, and the bread had the texture of wet kitchen roll, so I dread to think what sort of state the tuna sweetcorn (£1.10) arrives in. 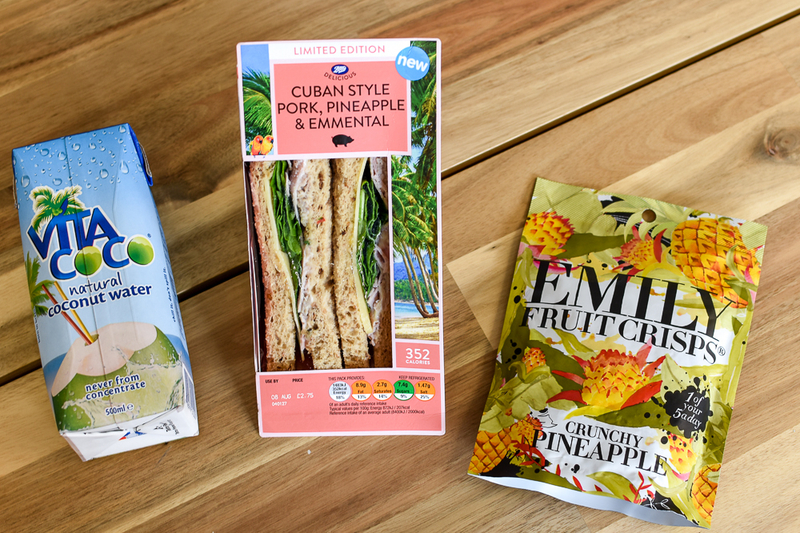 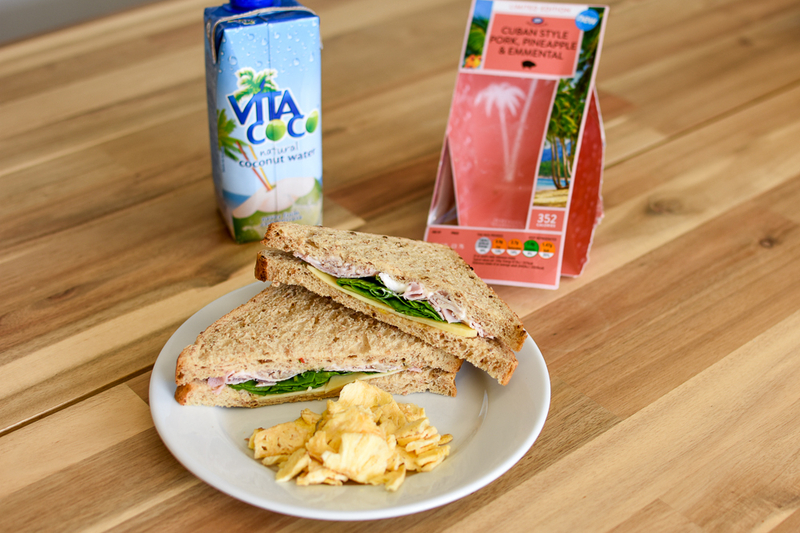 As you well know, the weekend starts on Thursday lunchtime, hence the fact today’s combo resembles something between a margarita pizza and a piña colada. With tens of thousands of potential combinations available at Boots though, this could’ve been tailored to any mood, whim, or occasion.

As the originators of the format, Boots could’ve rested on their laurels and still held onto a good portion of the market even in the face of growing competition, but instead, they’ve continued to expand their horizons, culminating in a product range second to none in terms of breadth of choice, but also the depth of options.

On top of their core range of sandwiches there’s seasonal specials, wraps, flatbreads, sushi; snacks range from boiled eggs (ew) to falafel, Snickers to granola bars, via yoghurts and fruit pots and Graze boxes and chilli crackers. A brief collaboration with Jamie Oliver provided us with more upmarket options, but the mere £1.50 supplement presumably didn’t even cover the cost of all the olive oil he used in each sandwich.

Aside from a bit of a chewy crust on the sandwich, the quality’s pretty good. It's amazing that Boots can make a profit by shifting these out at a more than 50% discount. All the money they save through tax avoidance schemes and prohibitive pricing of emergency contraception probably helps. Still though, those pineapple crisps are peng. 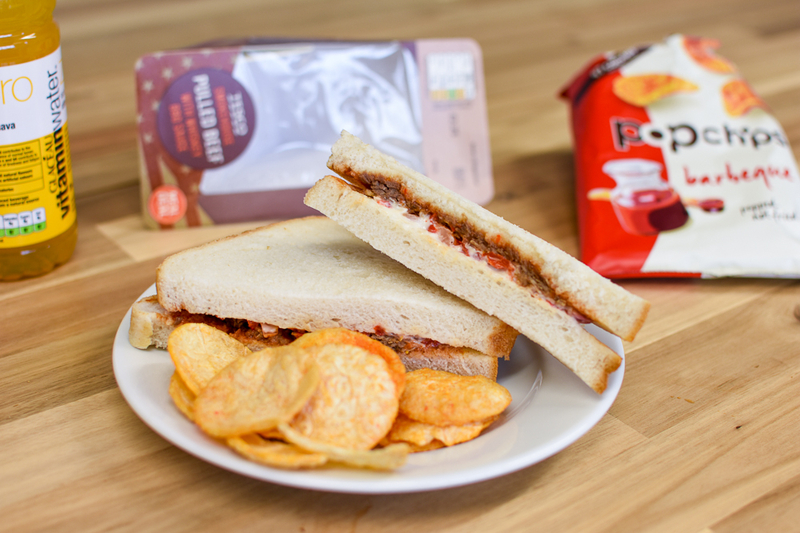 Seriously, are we still not over the whole barbecue thing yet? Have I walked into a Tesco Metro from 2012? This seems especially lazy considering it’s from Tesco, who have a history of throwing a fair bit of creative PR at their Meal Deal offer. Who could forget their Lasagna stunt-wich, or their Strawberries and Clotted Cream one?

Sure, I could’ve just picked a different sandwich, but I’m a sucker for a limited edition anything - not to mention it was the most expensive main included in the promotion, and I am just enough of a trash person that I’ll let that kind of thing dictate my purchase decisions.

This would be forgivable if the sandwich was at least edible, but the weird mayonaissey mush filling congregates in the middle of the bread, leaving the stale crusts choking-hazard dry. If I had started to choke, my only lifeline would’ve been taking a sip of “guava sunshine” Vitamin Water (the most expensive, yet worst drink in the Meal Deal promotion).

Sure, I could’ve hypothetically saved my life by choosing a drink of lower value that I actually like. I would've used it to lubricate the crust's passage down my esophagus and into my digestive system. I would live another day! Would I want to live with the shame of knowing that I hadn't taken the chance to get one over on Tesco to the tune of 45p? Can you even call that "living"?