The World's Best Pancakes, In Leeds

Around the world in eight-ish 'cakes...

Mixing up some batter and frying it in a pan isn't exactly rocket science, so it's no surprise that almost every country in the world has at one point come up with its own form of pancake. The recipe and cooking methods are shaped by each nation's tastes, culture, customs, and the produce available - from Eastern European blinis to Salvadorean Pupusa.

We've rounded up some of the more interesting ones, and picked the best places to get them in Leeds.

Let’s start with the big one. The go-to. The platonic ideal of what a pancake is and should be. When you hear the word “pancakes” your mind probably conjures a foot-high stack of these - every contour caressed by a glistening, heart-bothering trail of melted butter and maple syrup, mirrored by the drool trickling down your chin and onto your lap. (Watch out E.L James, I’m coming for your job…)

Flapjacks, a short-stack, buttermilk pancakes, Uncle Buck’s discus (maybe); whatever you call them, American-style pancakes are the dominant pancake on menus across Leeds, but the best ones have subtle differences.

Mrs. Atha’s is as well known for their buttermilk pancakes as they are for their coffee or mismatched crockery - and that's saying something. Buttermilk has a higher acidity than regular milk - that causes a reaction resulting in more air in the batter, and a fluffier pancake. The Greedy Pig does a version similar to drop-scones, and there’s a reason they’ve been featured in every conversation about Leeds pancakes since time began. Get them with maple syrup and some of their buttermilk fried chicken. Remember that science lesson I gave you about buttermilk? It also makes the batter for fried chicken crispy af.

Ox Club uses ricotta in their batter which gives them a lightness an almost-sour, lemony tang. They’re served with honeycomb and blueberries for a bit of sweetness. Laynes Espresso got put on the Guardian’s Top 50 Brunches in the UK list after their kitchen had been open for about three hours, so they obviously know what they’re doing when it comes to pancakes. You’ll have to check the specials board for toppings on any given day, but expect the likes of caramelised walnuts and banana, and vanilla mascarpone, berry compote, and crumble.

The pancakes have a kind of nutty flavour thanks to the use of buckwheat, which also makes them perfect for breakfast because buckwheat provides a slow release of ener- You just want to see how cool they’ll look on Instagram, don’t you? Here you go:

Traditional Dutch Babies are made with a thin batter, and baked in a hot skillet so the sides curl up as it cooks, like a Yorkshire pudding (heard of ‘em?). Farsley hidden gem Mill Kitchen has a skillet pancake that's similar, except with a thicker batter to give it a fluffy, cakey texture - then they stud it with blueberries, and top it with a scoop of Northern Bloc ice cream.

Ahh the pancake of your childhood. American-style pancakes might be good for living out your Diners, Drive-Ins and Dives fantasies, but nothing gives you that hit of nostalgia quite like a sprinkle of sugar and Jif lemon on a rolled-up crêpe. Headingley’s French cafe Monsieur Déjeuner is a no-brainer, as well as Crêpe Affaire in Trinity Leeds, and the bloke on Briggate who you like to imagine having intense turf-wars with the sweetcorn seller.

Pancakes are for life, not just for dessert. India’s national pancake is the Dosa, a lacy-edged savoury crepe made with a combination of rice, lentils, chickpea, and black garam. The batter is fermented which gives it a lactic flavour and makes it go great with curries. Get it from Tharavadu (full review) as a main meal, rolled and stuffed with a lightly spiced potato mixture, or as a snack from Bundobust next door, with a tomato curry and coconut chutney.

A kind of cross between a pancake, omelette, and pizza, Okonomiyaki is a Japanese pancake, stuffed cabbage, and topped with a number of vegetables, sauces, and spices. You can get them from Yo! Sushi in Trinity, topped with spring onion, katsu sauce, kewpie mayonnaise, and bonito flakes.

Another one similar to an omelette, Thailand’s Hoy Tod is a thick pancake - crispy and caramelised on the outside, and starchy and eggy on the inside. It’s also absolutely chock full of mussels, so it’s not to everybody’s taste, but Thai locals and more adventurous travellers swear by it. Give it a go at Zaap Thai (full review) 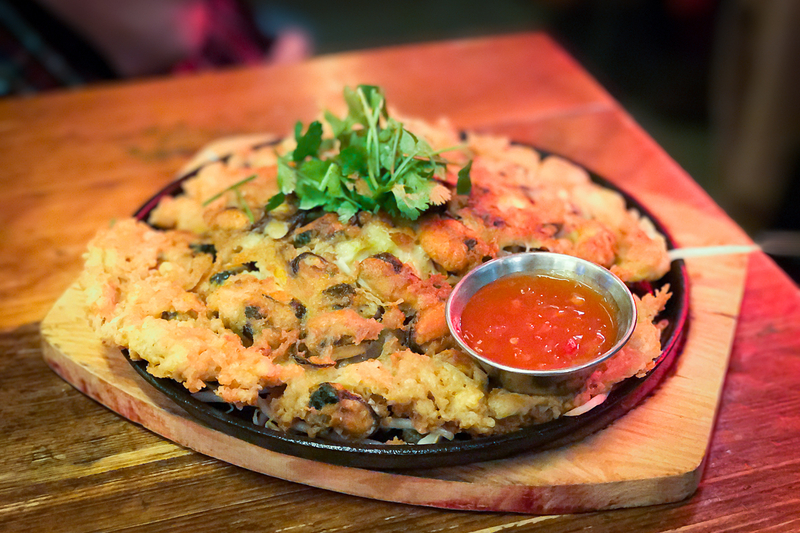 Wet February - The best beer, wine and cocktails delivered to your door in Leeds
● / News

How did the North do in this year's Michelin awards?
● / Dinner