When it comes to climate, Turkey doesn’t have the best track record; it was the last G20 member state to ratify the 2015 Paris Agreement in October 2021, over five years after signing it, and ranks 16th among countries that cause the most greenhouse gas emissions.

Tiny wooden coffee shops jostle glass-fronted hookah bars, and a cobweb of passageways takes in everything from souvenirs to perfumeries and shacks selling kumpir, the region’s beloved spuds

Traffic snarls, menus loaded with red meat and an eagerness to wrap everything in single-use plastic were common occurrences during my spring 2022 trip, and I was unsurprised to read of a spate of natural disasters the previous year: from droughts to wildfires, flash floods and even sea snot. Despite more signs of hope, including plans to reach net-zero emissions by 2053 and a new sustainable tourism programme, there’s clearly a way to go.

Tellingly, I arrived in Istanbul to be greeted by snowstorms, apparently unprecedented for March (though I’ve since learned that, while earlier may work for the south, it’s generally best to visit north and central Turkey from April regardless). I realised I’d come too early and this was an extra bitter blow, no doubt due to climate change.

Fortunately, planet-friendly pleasures awaited me at The Stay, which this year became Turkey’s first hotel group to be awarded carbon-neutral status by leading sustainability specialist Bureau Veritas. The luxury brand, which has four Istanbul hotels and one in the pretty Aegean town of Alaçatı, abounds in the forward-thinking spirit Turkey will need to hit its ambitious climate goals and aims to become entirely zero-waste by December; imminent changes include using biodegradable brown sugar cane straws and, at The Stay Warehouse Alaçatı, replacing its transfer fleet with electric cars alongside installing charging points.

Carbon offsetting and green investments are current staples but The Stay also excels in recycling, often reusing existing materials in unusual ways. “We have 120 tonnes of recycled wood and construction materials already stored for future projects,” managing partner Ali Ispahani told me, adding that “previous examples at The Warehouse (below) include making sun loungers from recycled wood and tiling the pool with glass bottles.” 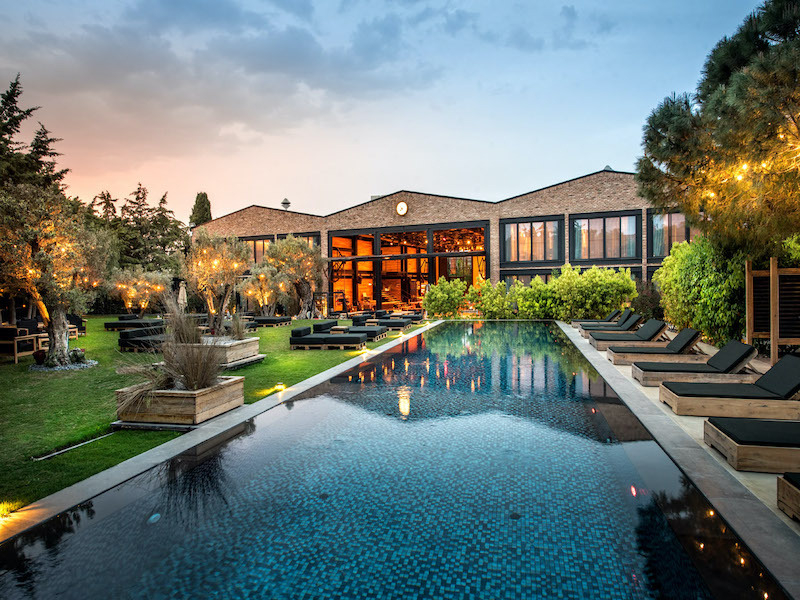 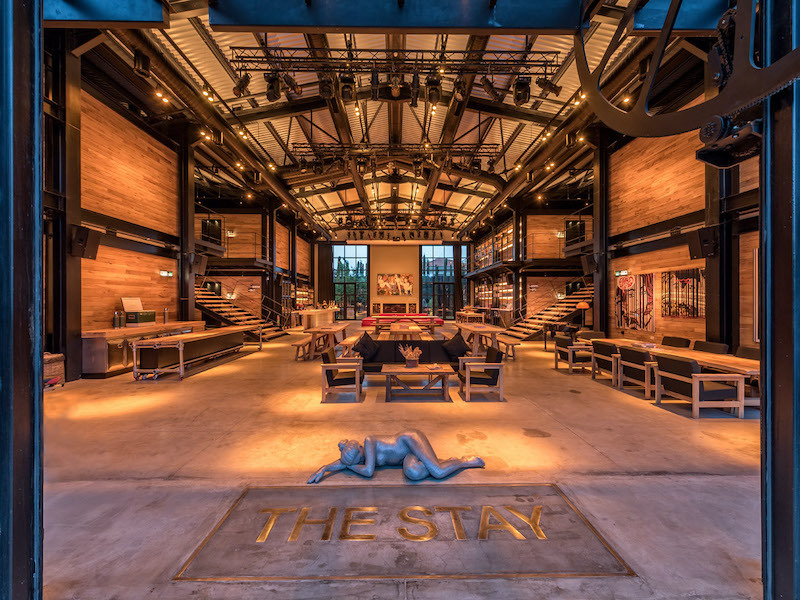 Talking of which, I was pleased to note glass instead of plastic water bottles in my room; according to earthday, humans use about 1.2 million of these per minute, all the more alarming considering 91% of plastic isn’t recycled (one of the reasons I now use a water purifier and flask when travelling).

I was staying at the brand’s Bosphorus branch, a 19th-century Ottoman mansion overlooking what is perhaps Istanbul’s most iconic vista: exquisite Ortaköy Mosque, with the continent-spanning Bosphorus Bridge soaring behind. Built by the Balyan family, also responsible for treasures like the mosque and Dolmabahçe Palace, it’s been stylishly renovated by local design firm Autoban and is a lesson in blending period details with contemporary accents: from gilded fittings and ornate plasterwork to chic chrome lighting and sumptuous soft furnishings. Long balconies to take in the gorgeous riverside views, plus an airy dining area and attentive staff, are further proof that “carbon-neutral” and “luxurious” don’t have to be mutually exclusive. 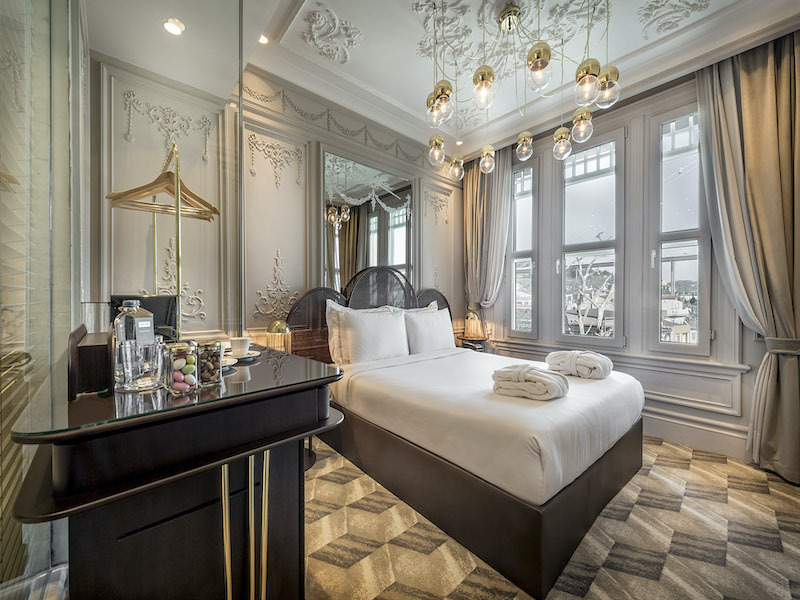 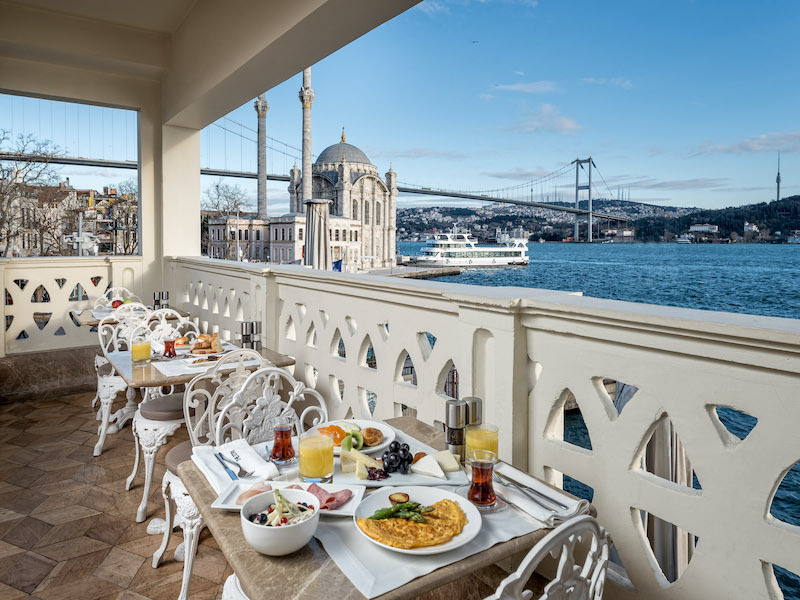 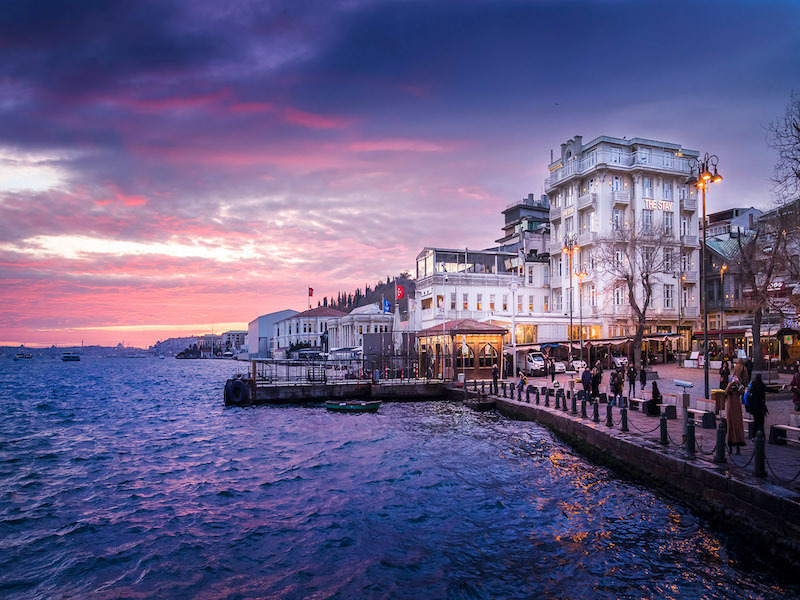 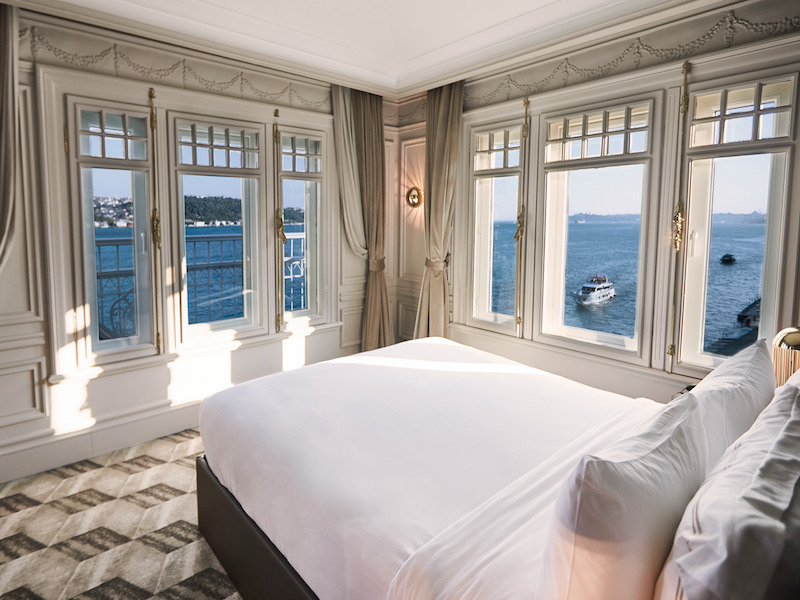 All of The Stay’s Istanbul hotels are just outside the centre, in distinctive neighbourhoods with their own character. The Bosphorus branch is based in Ortaköy, more understated than upscale Nişantaşı and trendy Bebek but no less charming. Huddled below the Bosphorus Bridge, which links the city’s European and Asian sides, it’s a sensory mishmash; tiny wooden coffee shops jostle glass-fronted hookah bars, and a cobweb of passageways takes in everything from souvenirs to perfumeries and shacks selling kumpir, the region’s beloved spuds. Groups gather on the waterfront square, alongside resident mogs and dogs, while river cruises ply their trade and gulls cry overhead. It was among several districts I explored and - while I wouldn’t call myself a “slow tourist” - I was glad I’d booked a couple of extra days to see Istanbul beyond the headline attractions.

Leaving Google Maps and the guidebook behind, I also spent a day with Azize Çeliktaş. I’ve learned that spending time with a local, especially a trained guide, offers a perspective you won’t find anywhere else and often reveals some hidden jewels off the main trail. We discussed dubious Turkish politics, tucked into kazandibi - a chicken dessert that tastes better than it sounds - in a bustling backstreet cafe and checked out a mix of popular sights and lesser-known areas: all with Azize’s expert commentary and plenty of laughs along the way. I also picked up a recommendation for a true Istanbulites’ hammam, about £40 cheaper than the tourists’ favourite I’d been planning to visit - now that’s what I call a productive day.

The rest of my time in Turkey was largely spent with G Adventures. One of the world leaders in responsible small group travel, its ethos is “award-winning trips [that] support local communities: giving travellers meaningful experiences with people, cultures, landscapes and wildlife while offering them the freedom and flexibility to explore on their own.” All tours are designed to benefit residents - from using locally run hotels and restaurants to avoiding exploitative experiences - and a “ripple score” measures how much traveller money stays in the local economy. Native guides and less-familiar inclusions reveal greater insights, while options like village homestays inspire interactions you’d be hard-pressed to find on your own.

Although not carbon-neutral like rival Intrepid, G also takes environmental impact seriously via initiatives like its Plastics Partnership Project and running tours as consciously as possible. This includes using a mix of public and private transport on many trips, but logistics in Turkey meant we had to use a small minivan to get around - hopefully, something that will change.

Following Istanbul and a quick stopover in Bolu, our Absolute Turkey tour began in Cappadocia’s Avanos. “This is less popular than Göreme and Uçhisar,” our excellent guide Umut told me - referring to the region’s main visitor hotspots - so I was surprised to discover an enchanting town known for its pottery tradition, with quirky artworks dotted among cobbled streets and wooden balconies. We later visited its more famous competitors and I undoubtedly preferred Avanos: proof that getting off the tourist track (even if only slightly) is hugely worthwhile. This and travelling off-season also help to combat the negative impacts of overtourism, making it a win-win situation.

Our two-week trip passed in a whirlwind of ancient Greek cities, natural wonders and coastal highlights. We hiked the Lycian Way (a tiny portion of it anyway), sampled mulberry wine in the mountain village of Şirince and marvelled at the “cotton castle” of Pamukkale. We watched whirling dervishes, gazed across otherworldly tufa valleys with their endearing “fairy chimneys” and enjoyed a lip-smacking seafood dinner in Antalya as the sun set over the Mediterranean. We boated around the Turquoise Coast, saw the Trojan Horse, paid respects at poignant Gallipoli Peninsula and did much more besides. Turkish food was a joy throughout, save an overreliance on red meat, and I became addicted to fırın sütlaç: cold baked rice pudding with a dusting of cinnamon.

Another highlight was visiting two community projects supported by G Adventures via their Planeterra scheme. Both help local women to make a living - particularly important considering only 28.9% are employed in Turkey’s formal job market, compared to 65.6% of men - but I found çöp(m)adam (literally “garbage ladies”) especially inspiring as it tackles our endemic waste problem too. For more than a decade, the enterprise has worked with over 500 women to turn companies’ throwaway materials into pretty, saleable items: including purses made from crisp packets, and bags woven from scrap rags otherwise destined for planet-polluting landfill sites. A tip from me if you’re going; don’t miss Şeytanın Kahvesi, the eclectic coffee shop next door - its kaynar, an intense red drink made with hazelnuts and spices, is truly divine.

çöp(m)adam reminded me of a fellow dual-purpose venture in Istanbul; Pugamon’s ingenious vending machines dispense pet food when someone deposits a plastic bottle, both encouraging recycling and helping the city’s vast amounts of stray cats and dogs (a bittersweet problem that’s beautifully illustrated in films like Kedi and Stray). But, while initiatives like these offer reasons to be optimistic, they’re not enough if we don’t all play our part. As my Turkey tour had shown, sustainable travel is one very rewarding way to do it - transforming a potentially harmful industry into a true force for good.

Vicky Smith flew out with Pegasus, which flies direct from London Stanstead, Heathrow and Manchester to Istanbul Sabiha Gökçen (plus selected other locations) daily. Prices from Manchester start at £94.99 one way including taxes. Book on www.flypgs.com or the Pegasus mobile app for the lowest fares.

Pegasus has a variety of sustainability measures in place, from optimising its fleet to carbon offsetting and operating with sustainable aviation fuel where possible. It has pledged to achieve net-zero by 2050, with an interim goal of reducing emissions by 20% by 2030.

When flying, Vicky also recommends offsetting carbon with a reputable scheme like Trees4Travel.

Vicky stayed at The Stay: a luxury collection of carbon-neutral, design-led hotels in Istanbul and Alaçatı. Part of the Nu People group, which includes restaurants like the legendary Pandeli, the company even has its own eco-conscious clothes label - The Stay Line - and plans to become zero-waste by December 2022. Istanbul B&B summer rates are from £250 (Nişantaşı), £265 (Bosphorus) and £430 (Bebek) with flexible booking terms.

Vicky toured with G Adventures, a responsible small group adventure travel operator offering more than 700 tours in 100 countries; why not book via Charitable Travel, who'll give a portion of your holiday price to charity at no extra cost? She also spent a day with leading tour guide Azize Çeliktaş, who works with customers to create tailored itineraries in Istanbul and across Turkey; prices start at £140 for a city tour. Email Azize (azizeceliktas@gmail.com) or message her on Instagram to book.

Read next: 'No depth of flavour whatsoever' - Etci Mehmet reviewed

Things to do in and around Leeds: June 2022
What you say
Previous Article Next Article
Read Next
● / Things to Do 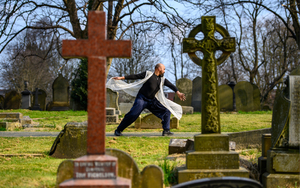