What to expect from a visit to Pilgrim, Duke Street Market

Vicky Andrews embarks on a culinary trail down the Camino

It’s felt like an achingly-long time between pop up and permanent pitch for Pilgrim, but the good news is that it’s been worth the wait and the winners of ‘My Million Pound Menu’ are now open for business inside the new Duke Street Food and Drink Market.

If you can think of a more heavenly place to enjoy Spanish cuisine than in the sunshine, do let me know

Since the 9th century, pilgrims have walked the Camino Way to the tomb of St James in northwestern Spain. As the travellers seek fuel along their journey, each distinct region takes its turn to nourish their visitors with vibrant and diverse flavours, textures and produce.

Pilgrim restaurant brings this incredible story to life, with each dish representing a stop on the journey. In reality, The Camino has more than twelve established routes, so the idea is that the menu will rotate diverse flavours and ingredients from each region, making every visit different. Farrell’s ambitious Duke Street food hall - home to six individual kitchens in a renovated Ropewalks warehouse - has only been open for a few weeks, but the Pilgrim guys have already gone the extra mile to make the flagship restaurant a success. 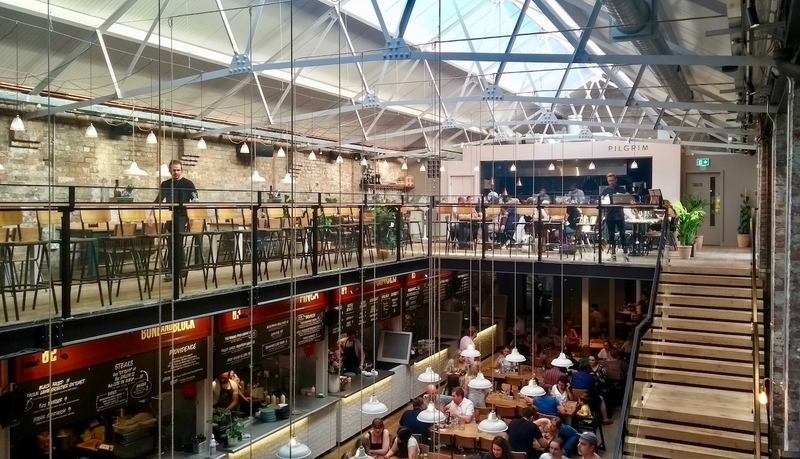 It’s a fresh approach to traditional Iberian food, promising seasonal and ethically sourced regional produce with a big focus on live-fire flavour. The centrepiece of the new restaurant is the open kitchen, cooking up dishes like wood-roasted pork chop, chargrilled sardines and aged beef steak. There are veggie options too, including haricot beans with tomato broth and piquillo pepper; coal-roasted artichokes with smoked romesco; and pickled white asparagus in a black olive crumb.

The menu is mainly around small plates plus a 4-course tasting menu priced at £35, with an optional beverage pairing. Wines will also rotate with a ‘select’ menu following the current featured Camino, plus vermouths, port, Spanish sherries and ‘taptails’ (cocktails on tap).

I fell in love with the Liverpool pop-up in March, enjoying a gastronomic adventure through the coastlines, forests and farmlands of Basque, Cantabria and Galicia (read about it here). The sequel at Duke Street market rekindled an old flame and I was back on the Camino del Norte once again, joining the pilgrimage from the town of Irun, just outside San Sebastian, before meandering along the coast and turning inland at Ribadeo to Santiago de Compostela.

The food on this most northern route was daring and delicious; salted potato bread; smoked butter poached scallop; wood fired Iberico presa (pork steak); coal roasted courgette with truffled sheep’s cheese; barbecued octopus tentacle and guindilla salsa. To finish, that wonderful St James tart with grilled apricot and fennel ice cream. Probably the most fun you can have without taking your walking boots off. I just wish my Fitbit could count the steps (but not the calories).

Both Jamie and Anthony seem dead chuffed with the new place. They’ve been living in Liverpool since January and although they’ve enjoyed hanging out in some of Lark Lane’s pubs while they wait for the paint to dry at Duke Street, they’re excited to be up and running and back to doing what they love.

It’s amazing what the designers have done with the building and Pilgrim is a stunning mezzanine space with a prime people-watching spec over the bustling market and a lovely outdoor terrace. If you can think of a more heavenly place to enjoy Spanish cuisine than in the sunshine, do let me know. I predict that most of your answers will be written on a postcard. Buen Camino. Salud!