‘Love the location? Not really, but the star of the show is the food’ - Pilgrim, Love Lane, reviewed

I’ve never been one to Basque in the glory of tapas, so I’m overjoyed to rip up my past reviews of crap croquettes and pathetic patatas and tell you that Pilgrim Restaurant has put Spanish cuisine back on the map. Leave your castanets at the door, please.

We are eating dinner underneath a railway arch, elbow to elbow with foodies who have made their own pilgrimage to sample the Camino del Norte-inspired concept from the winners of My Million Pound Menu. On the BBC2 show, the Pilgrim team wowed French host Fred Sirieix and secured an investment from Scouse entrepreneur Matt Farrell to continue their culinary journey.

Following successful sold-out events in London, Jamie, Dave and Ant have now ventured up north to test their concept out at 17 Love Lane, a ‘pop-up’ spot in North Liverpool. It’s a quirky little place off the beaten track with a few strange props dotted around and some questionable music choices. But the venue isn’t really important - the star of the show here is the food.

The menu brings the Camino story to life, with each dish representing a stop on the journey from San Sebastian to Santiago De Compostela, passing through rugged coastlines, forests and farmlands. It is humble produce turned into world-class cuisine.

The only other thing you really need to know is that in April they will move from pop-up to a permanent home inside the new Duke Street Market. Put it in your calendar now. Book the day off work if you have to. Maybe a week. Hell, why not make it a month, just to be sure. It would take you that long to do the Camino walk itself.

My Duke of Edinburgh orienteering skills were never up to much, so on this evening’s expedition I am happy to follow the leader with the four course taster menu (£28) and drinks pairing with matched wines and vermouths (£18).

We begin in the Basque region with a spritzy glass of Txakoli (pronounced cha-koh-lee) and mackerel, a fish with an odoriferous and oily reputation that I haven’t eaten for years. It proves to be a marvellous return of the mack; chilled and meaty but with a delicate flavour, partnered with crunchy anise from a raw fennel salad and a punchy blood orange dressing.

Our next stop is Santander, Cantabria and an introduction to calçots, a sort of leeky, green onion. They’re actually a Catalan delicacy, but we’ll forgive the artistic license as these sweet treats are famous enough for their own festival in the region surrounding Barcelona, where they are chargrilled and washed down with gallons of red wine. Sounds good to me.

Tonight, the calçots are paired with an oakey Akemi Rioja Blanca and served in a warm bowl of heaven with celeriac, melted goats’ cheese and dill oil. It’s hearty comfort food for a rainy night under the arches and the sauce demands a cheeky finger to clean the bowl before the table gets cleared.

The meaty part of the menu finds us in Ribadeo, Galicia with a devilish combination of morcilla and a ruby red Godelia Mencia from Bierzo. The smoothness of the black pudding and a delicious smoked garlic puree manage to make up for some clumsy presentation on the part of the red peppers. Another bowl scraped clean. Some bread on the side would definitely have helped me to save face.

The pairing of St Petroni vermouth and hazelnut crusted St James tart are a worthy reward for anybody who’s just finished trekking the Camino. I’m not sure if dessert is a cakey tart or a tarty cake - and whether that sentence counts as an impure thought - but the moist sponge delicately crumbles away with a heavenly splash of creme citron and spicy burnt apple. A wonderful way to cross the finish line in Santiago De Compostela.

My only criticism of the menu is that it would have benefited from one more course. I’d have loved to try some famous Galician octopus or pork chops. Perhaps I'm just being greedy.

The Pilgrim guys have hinted that their new restaurant will run the set menu alongside a more casual, small plates offering, which should draw plenty of interest from the cool kids down at the Baltic Market and Dockside Dining Club. And there’s no doubt that investor Matt Farrell from Graffiti Spirits has some impressive brands behind him (Santa Maluco, El Bandito, Salt Dog Slims). I just hope that the new Duke Street Market can talk the talk, and walk the walk.

This was a review of a two-day pop up at 17 Love Lane. Pilgrim has secured investment to become the flagship restaurant at Liverpool’s up and coming Duke Street Food and Drink Market, launching April 2019. It will be serving a similar menu.

‘One of those places I would always recommend’ - Bakchich, Bold Street, reviewed
What you say
Read Next
● / Latest Reviews 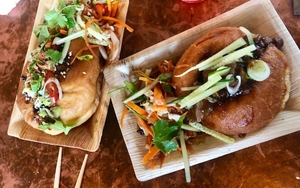 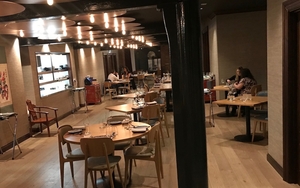