WATCH | Inside Watchmaker's factory ahead of Wreckfish opening

150 bookings for trial pop-up snapped up within moments

WRECKFISH,  the Liverpool bistro-in-waiting from the founders of Sticky Walnut and Burnt Truffle, will open its doors for a limited, one-week series of sittings, in February.

Bookings for the 150 covers, opened online on Sunday (January 15) for the first of five pop-up services in exactly a month's time (February 15).

They were snapped up almost immediately.

For those "lucky" few, don't expect to be dining in the lap of luxury. So far there is no running water or electricity at the Slater Street venue and customers needing a tinkle will have to head over the road to the loo.

Liverpool Confidential revealed in December how award winning restaurateur Gary Usher was planning a crowd funding campaign to raise £200,000 to make the restaurant, in the old Watchmaker's building, a reality.

Now, ahead of the appeal's launch in March, Usher is offering people a glimpse of the new venture in its nebulous stage. Guests will be invited to sample the food and get a feel for the venue, while setting their own price for what they think dinner is worth.

Last year Usher opened Hispi, in Didsbury, South Manchester, to massive success. but news of his plans for Liverpool brought a mixed reaction  on social media with some people thinking he was a bit of cheeky get and others saying they couldn't wait to get in there and hand him their money.

Usher said at the time that in reality he didn't expect people to cough up £200k but "I think there’s a hell of a lot of fun and spirit involved in doing a pop-up in a derelict building. We would love to open in Liverpool – it’s a stunning building and I fell in love with it straight away”.

Wreckfish will follow in the footsteps of the renowned Sticky Walnut in Chester, named the AA Guide's 2014 Restaurant of the Year, Burnt Truffle in Heswall on the Wirral.

With many of Usher’s followers already keen to book in, reservations are limited to 30 people per day and will be available one month before each sitting, with the first date opening for bookings on January 15.

Alongside his team - and he's looking for new chefs for the Liverpool operation - Usher himself will be serving dinner on the evenings of Wednesday February 15, Thursday 16, Friday 17 and Saturday 18, as well as Sunday lunch on the 19th.

The menus is expected to include dishes such as stone bass cerviche, venison with pickled white cabbage and mushroom, and chocolate tart, hazelnut mousse and honeycomb.

He said:  “We want the experience to be totally raw."

One takes it they'll have the gas on by then and he isn't talking about the grub. 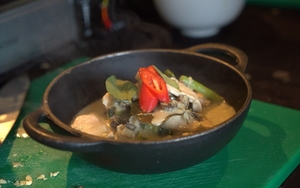 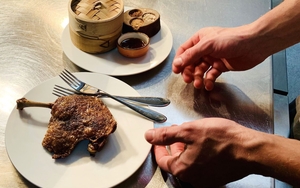 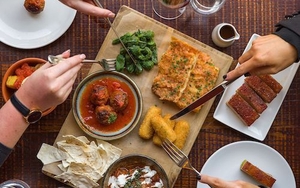