“It’s weird to be in a restaurant when the only thing I can see is you,” says the OH. Seven years together and the spark is still there. They do have a point though; we’ve booked a 6pm table at Luca on Allerton Road and have been put in the back room on our own. Walking into a restaurant and thinking how gorgeous it is, only to be walked past vacant tables, down a dark corridor and into an empty room. It’s like being booted out of first-class into economy.

Dead simple but an absolute knock-out. I could eat that dish ‘til the gondolas come home.

It’s 35 degrees Celsius, the hottest day on record, and we have left the house in search of chilled drinks and decent air-con. If the world is going to end you might as well go down sipping on an Aperol Spritz, listening to Potion by Dua Lipa.

We get settled but five minutes later are told we’re sat at the wrong table. We move onto the next vacant table. The back room looks smart but without people has all the vibes of the garden section in IKEA; exposed brickwork and fixtures and fittings in 50 shades of green. Oh Christian, punish me with your yucca plant and whipped feta.

Luca used to be the imaginatively-titled 109 Allerton which became inexplicably famous for its 109-superfood bowl. There’s a cute story on the Luca website about how the new owners flew to Italy for some “culinary research”, sampling bacari and cicchetti down the backstreets of Venice, and wanted to bring those tasty Venetian titbits back to Liverpool.

Yes, it’s another small plates restaurant, and Allerton certainly has plenty of those, but the menu isn’t your usual Italian fare and the owners’ holiday in Venice - erm, sorry, I mean RESEARCH - certainly seems to have paid off.

There is white Tuscan bean bruschetta (£6.50), the bread crisp on the outside but fluffy in the middle and smothered with cannellini beans wrapped in waves of sweet red pepper and a punchy salsa verde. Dead simple but an absolute knock-out. I could eat that dish ‘til the gondolas come home.

Gamberi alla busara (£8.50) doesn’t look much but again proves that Luca isn’t just knocking out bastardised tapas here. The prawns are plump and drenched in a spicy cocktail of tomatoes, chilli, parsley and preserved lemon aioli. Paired with a peachy glass of Verdicchio (£5.50) and my thoughts wander from the impending threat of global warming to a whimsical trip to Venice and its beautiful canals. Oh.

Good burrata is enough on its own and barely needs anything to go with it. This version (£8) from the antipasti is what I’d politely call “a bit busy”. The salad leaves, chopped tomatoes and peppers are nice but the mountain of foliage crowds what should be the centrepiece. The balsamic vinegar is too much. A plate that looks like this belongs on the bambino menu.

Swimming in melted butter, spaghetti carbonara (£8.50) is everything pasta should be; pert to the prong and smothered in oodles and oodles of cheese. The combo of egg, pancetta and pecorino (and, as any Italian will tell you, no cream) is very rich but the portion size is just right.

By now the whole restaurant is starting to fill up but still the plates arrive steadily. For the most part, the service at Luca is absolutely brilliant; the food is prepared quickly, the drinks are kept topped up, and our hosts are on the ball with any questions. Our table might be out the back, but they haven’t left us hanging once.

From the “verdure” section of the menu, braised local cabbage (£4.50) isn’t what I imagined at all. Cabbage and pancetta soup, perhaps? There’s more of that salad garnish too. The Parmesan brodo is delicious but for me this dish just doesn’t work on a small plates menu.

In retrospect, we probably should have ordered one of the pizzettes, but I’m a sucker for ox-cheek and Luca’s version comes with Gorgonzola Dolce and a pancetta crust, braised in Barolo (£12.50). The OH sums this dish up with the sort of food appreciation noises you really shouldn’t make in public.

“It’s all of my favourite things in one dish,” she says. “Meat, cheese and red wine.”

A little disappointed that I didn’t even make the top three, I console myself with another glass of wine - the Tor del Colle sauvignon blanc (£5.95) - and ask to see the dessert menu. Just one Cornetto?

Of the great Venetian painters, it’s a bit mad that Bellini got a cocktail named after him when Veronese was the real party animal. Perhaps Luca could name the dark chocolate budino (£7.50) after him instead? A spoonful of chocolate heaven. Tiramisu (£7) is another “last supper” dessert; boozy, fluffy and gooey in all the right places. Spoons are thrown down triumphantly at the final scoop.

It’s 7.30pm when we finish up and get the bill. With a smile that says “sorry”, our server says that the next customers are here for our table if we wouldn’t mind finishing our drinks somewhere else. Basically, it’s time to bugger off.

Did Luca bring us the romance of Venice? Not exactly, but at least we avoided the rip-off prices and the stink of the canals. Eating out should be an escape from the everyday and on that note Luca is buonissimo. 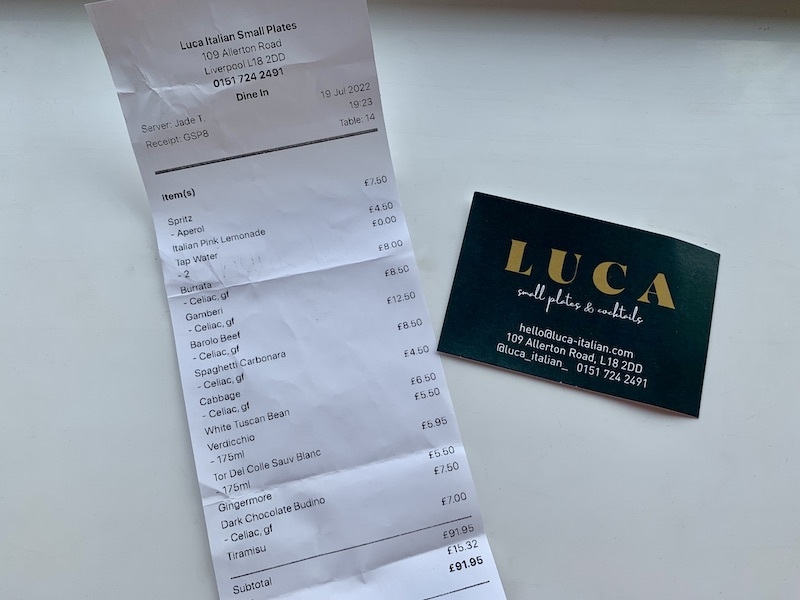