Liverpool has a greater number of public sculptures than any other location in the country aside from Westminster, including cultural icons like the Beatles through to sporting heroes, royalty, and monuments depicting people linked to slavery and Britain’s colonial past. In part one, we met Ken & Bessie, Victoria & Albert, and George & Mary. Here, we meet Liverpool's first Olympian, a musical legend (that isn't the Beatles) and an infamous royal knob.

(Certain requirements have been imposed on this list, otherwise it would be a million words long. So, for no reason other than brevity, statues have to be of people and be outdoors). 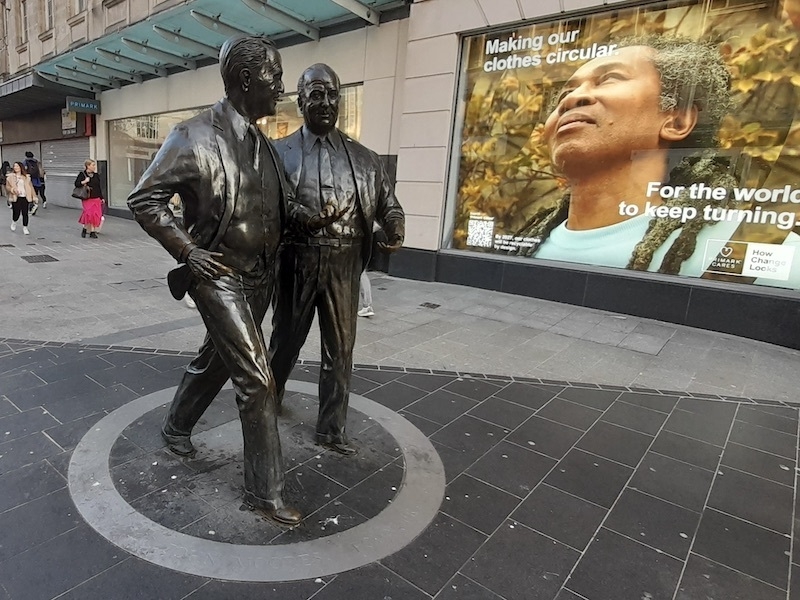 You’ve got to admire the sheer corpulence of these two. If statues are meant to flatter the real people then you can only wonder how plump they were in real life. This is probably the statue that most people in Liverpool walk past the most, seeing as how it’s outside Primark. John and Cecil Moores founded Littlewoods and must have made a pretty penny, considering how well fed they are. 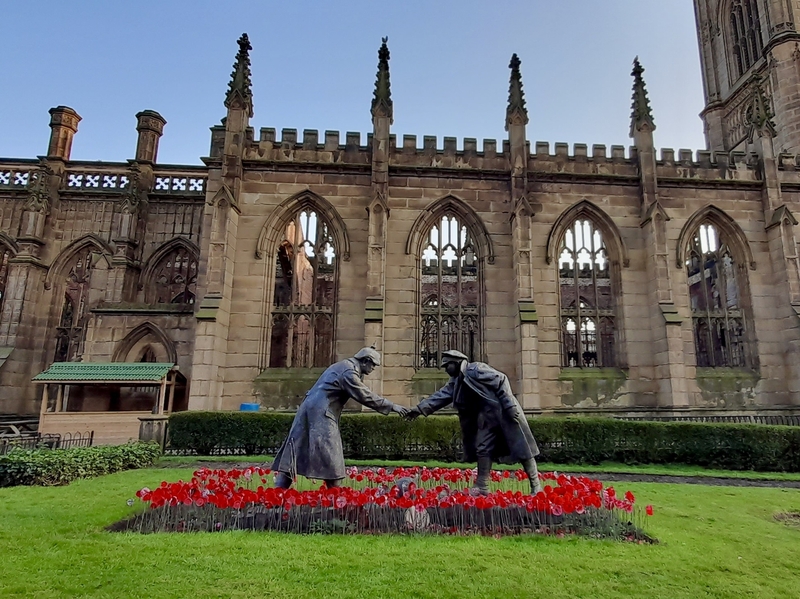 All Together Now - St Luke's Church

In the grounds of St. Luke’s (AKA the Bombed Out Church) is this statue by Andy Edwards which shows two soldiers about to play football in No Man's Land along the Western Front. But let’s face it, it’s a depiction of the two Paul McCartneys in the Pipes of Peace video, isn’t it? 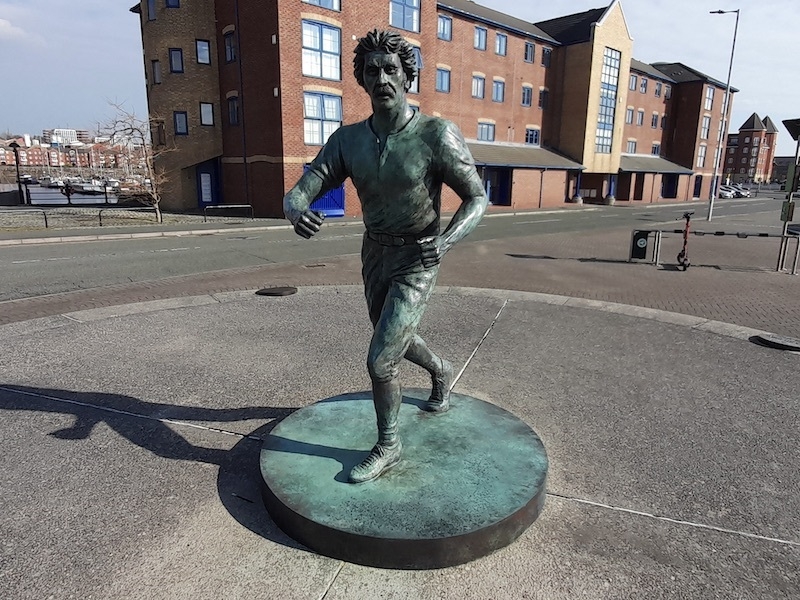 This is an odd one. The inscription on this statue of John Hulley declares him to be “Liverpool’s first Olympian”, complete with Olympic rings. This, despite his dying in 1875, 21 years before the first Olympic Games. It turns out that Liverpool staged one of the forerunners of what would become the Modern Olympics and Hulley was also the founder of what became the British Olympic Association. You learn something every day. 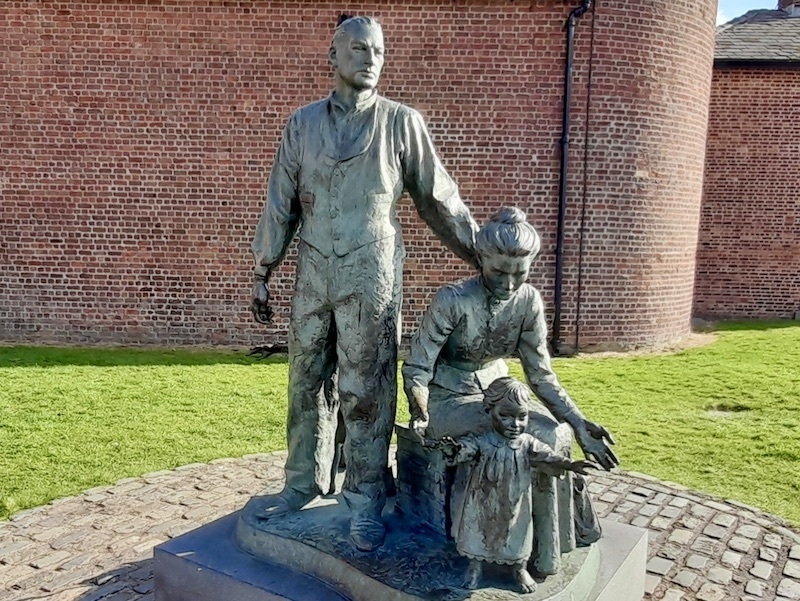 You wouldn’t think there would be a connection between Liverpool and Mitt Romney but here we find a statue paid for by the Mormon Church, commemorating the nine million people who sailed for a new life in the new world from Liverpool. That it’s taken so long to get to the first of our musicians and it’s not even one of them. Funded primarily from fans, this bronze statue of Billy Fury was unveiled in 2003. Billy must still have a few fans, judging by the flowers placed here. The statue is by local sculptor Tom Murphy, who also did our next stop... 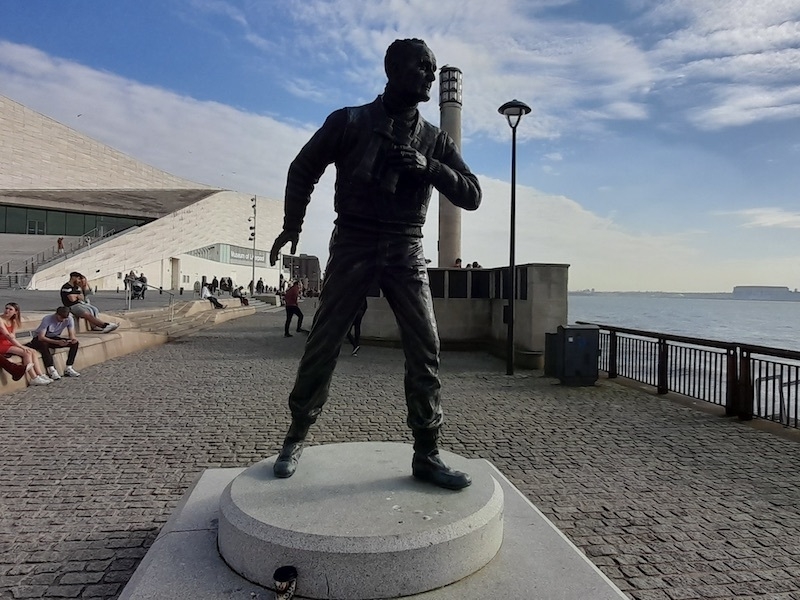 Frederic John "Johnnie" Walker was a Royal Navy commander during the Second World War who specialised in sinking German submarines. He’s credited with sinking 17 of them, more than anyone else. He was actually from Plymouth but he was stationed here during the war and died in Seaforth. Not many people go there and live. 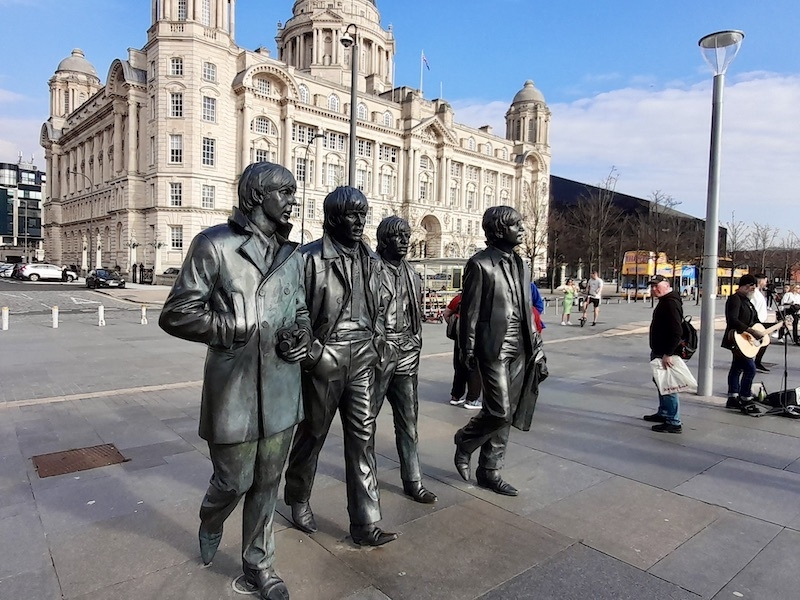 The mop-tops. You may know them from the recent documentary Get Back. I had to wait a while to get this picture as there were so many people wanting to get their photo taken with them. This sculpture is a vast improvement on the previous sculpture of the Fab Four in Cavern Walks in that it actually looks like them. The guy on the guitar to the right was singing Beatles songs. Of course he was. 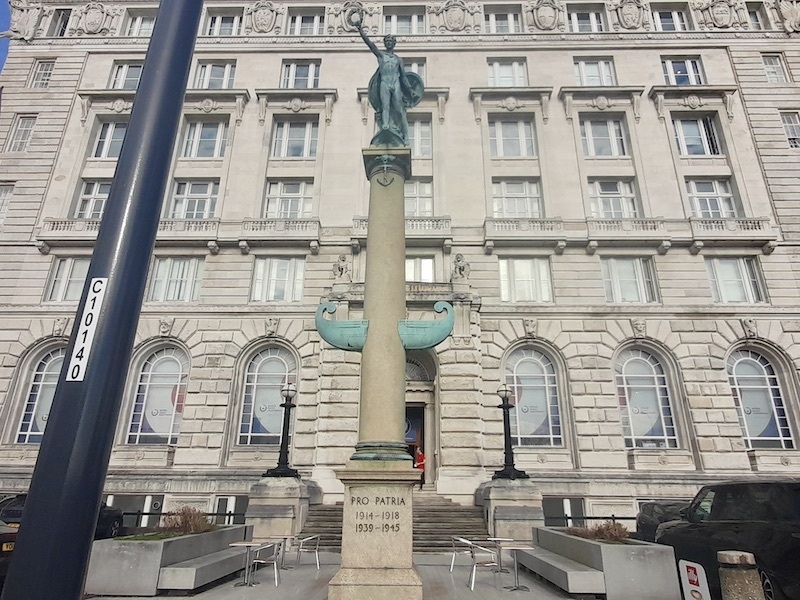 You may think Dickie Lewis (see below) was the only naturist in Liverpool, but you probably missed this guy outside the Cunard Building. This is the Cunard War Memorial and, what can we say, he’s lucky he didn’t get it shot off. 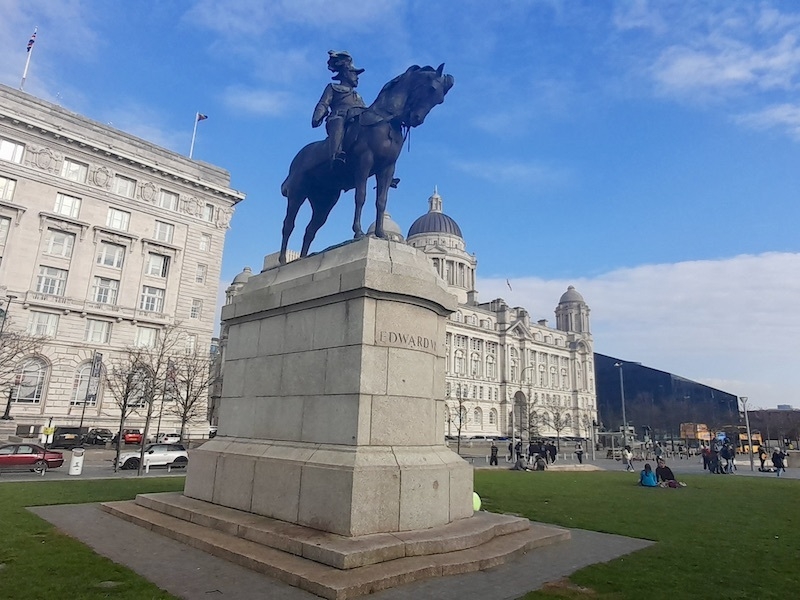 More royalty, this time Queen Victoria’s disappointing first son and the man who put the edward in Edwardian, the hefty Edward VII aboard the world’s unluckiest horse. 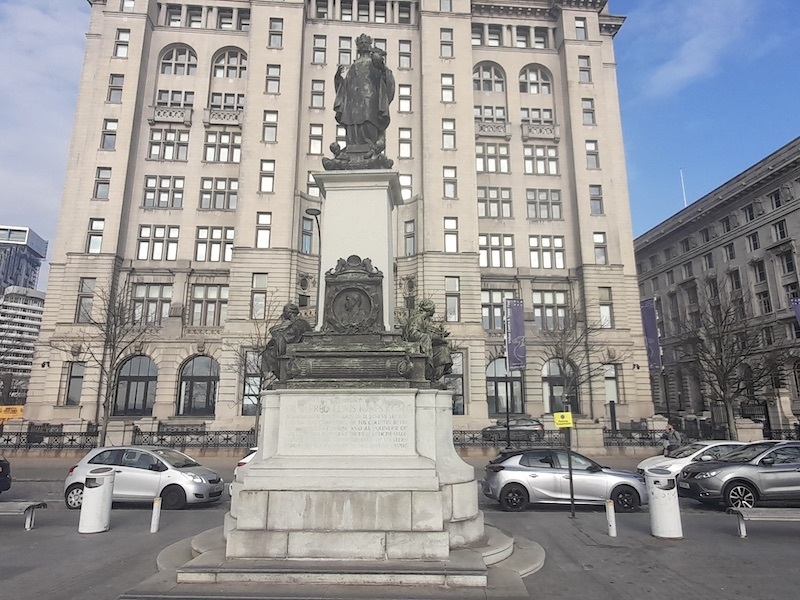 This is the Alfred Lewis Jones Memorial right in front of the Liver Building. He was a ship owner who traded between Africa and the West Indies, but after the abolition of slavery. Still sounds dodgy, right? Yep, he was sometimes called the "uncrowned king of West Africa" but he did found the Liverpool School of Tropical MedicineBut not much. The three statues at the base are called Liverpool, Research and The Fruits of Industry. 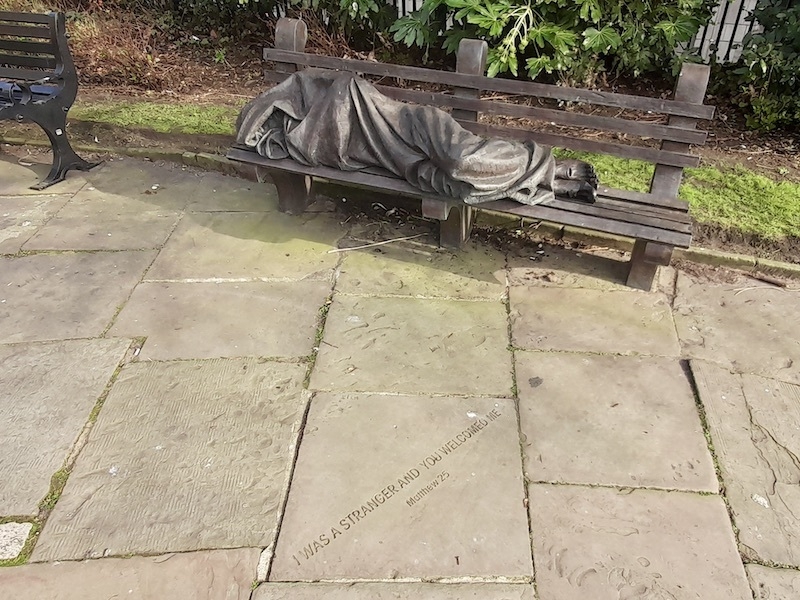 A relatively new addition to the sculptures of Liverpool is this almost-abstract piece clearly depicting a rough sleeper with bare feet. The bible quote carved into the pavement in front adds more poignancy. This is called Homeless Jesus and there’s a few similar pieces around the world. The grounds of St. Nicholas’s already contain much that is melancholy (see below) and this is another powerful piece. 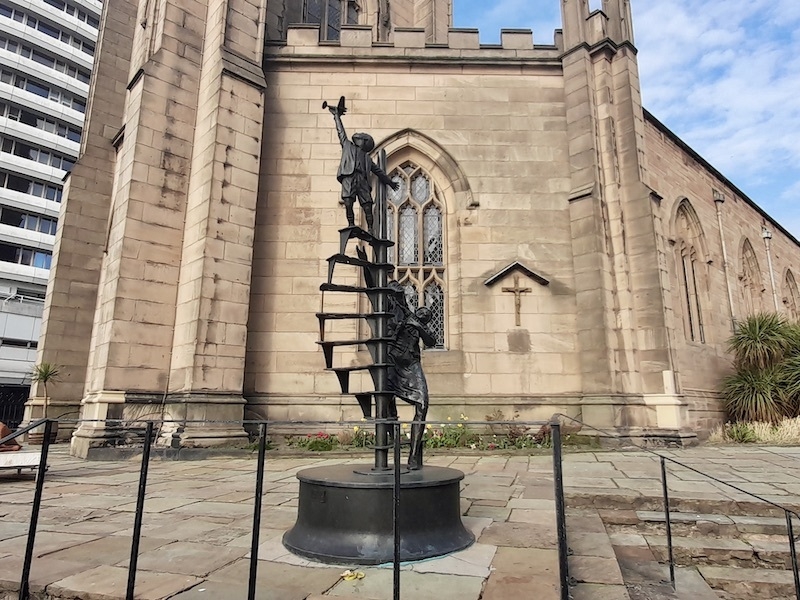 It’s hard to do justice to the Liverpool Blitz Memorial as it’s so hard to photograph properly without a step-ladder. So you’ll have to take my word on how powerful this is, a simple depiction of mother and child clearly wanting to run for cover whilst the elder child can’t help but admire the planes raining death on the city. This is how you do it. 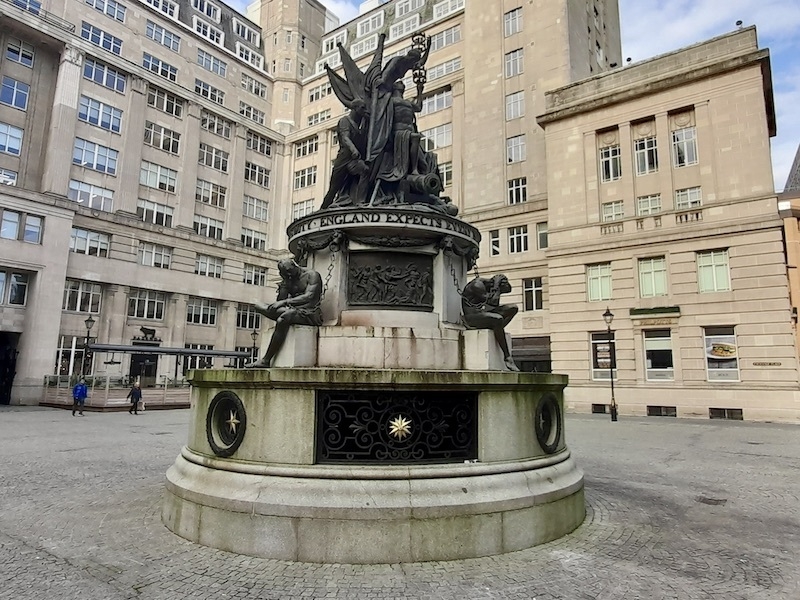 From the sublime to the ridiculous. Liverpool’s tribute to Admiral Lord Nelson was built in 1813, before just about everything mentioned so far, so we can perhaps forgive its sheer absurdity. Yes, that is supposed to be Horatio at the top and to the fore, ripped like Jason Statham, standing on a cannon with barely a stitch on. There’s no sign of his missing eye although his missing arm is obscured by a handy drape of material. He is holding a sword that is penetrating some crowns, for reasons, whilst an angel leans over him.

Meanwhile, below the mess at the top, which also includes a depiction of Britannia and Death, are four French prisoners in chains. This is redolent of a time when it wasn’t enough to beat an enemy but to also enslave them. Given that there was actual slavery going on at the time, which the British Empire still hadn’t outlawed at the time this was made, just makes it look odd to modern eyes. Exchange Flags is sufficiently buried behind the Town Hall that we can pretend this embarrassment doesn’t exist. As you can see, it’s hardly besieged by tourists. Right behind the Nelson Monument is the Exchange Newsroom Memorial to those killed in the First World War. Yes, that is Britannia at the top again, in what was hardly her finest hour, along with advancing soldiers, which is something the real soldiers singularly failed to do for four years. At least the soldier being treated for wounds at the bottom is accurate. 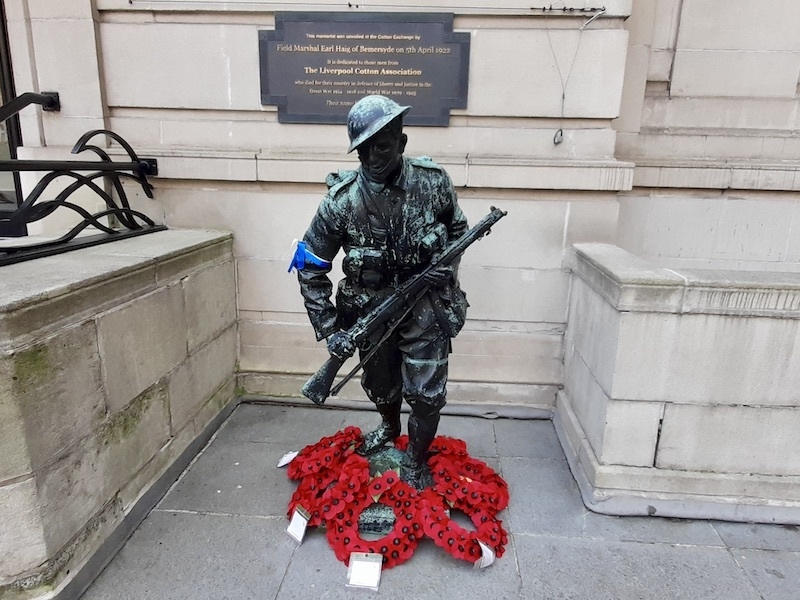 A far better war memorial is placed unobtrusively amongst these monstrosities. The Cotton Association War Memorial used to be in the Cotton Exchange and depicts a simple Tommy in uniform. The statue was commissioned by the Liverpool Cotton Association in 1921 to commemorate those men who went from the association to The Great War and The World War. A bayonet formed part of the original design but it kept getting nicked. A lot of people think this big-headed statue doesn't look anything like Lennon, but it's still one of the most popular photo ops in the city. The statue was unveiled in 1997 as is said to be a representation of the cover of John's 1975 album, Rock 'n' Roll. The original head featured John's duck-tail quiff, but was vandalised and replaced with one of seven spares that designer David Webster had from different stages of John’s life. He also did the sculpture of the Beatles on the front of the Hard Days Night Hotel. 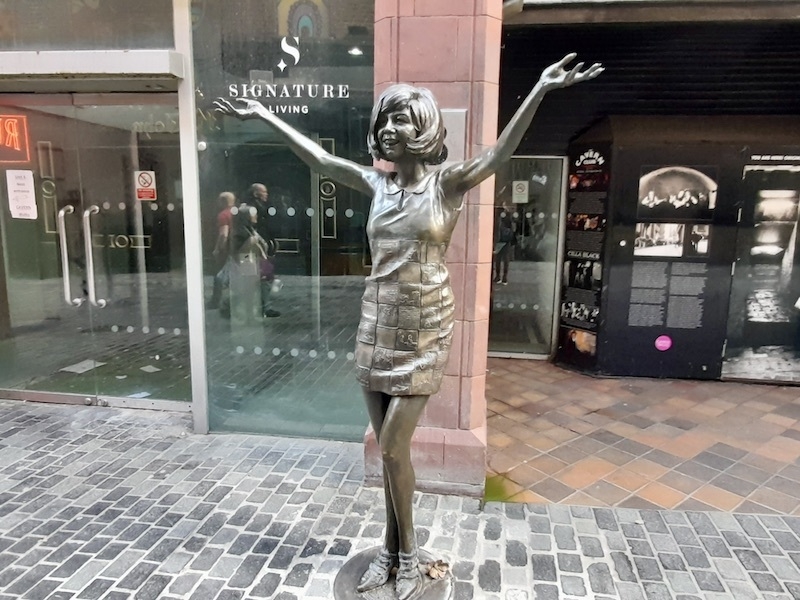 Just further down we get Our Cilla outside the Cavern Club (not the actual Cavern Club). She was recently taken away and reinstated and you can see what was done to her. Her dress now has little squares with the names of some of her songs scratched in. She wasn’t the only one… 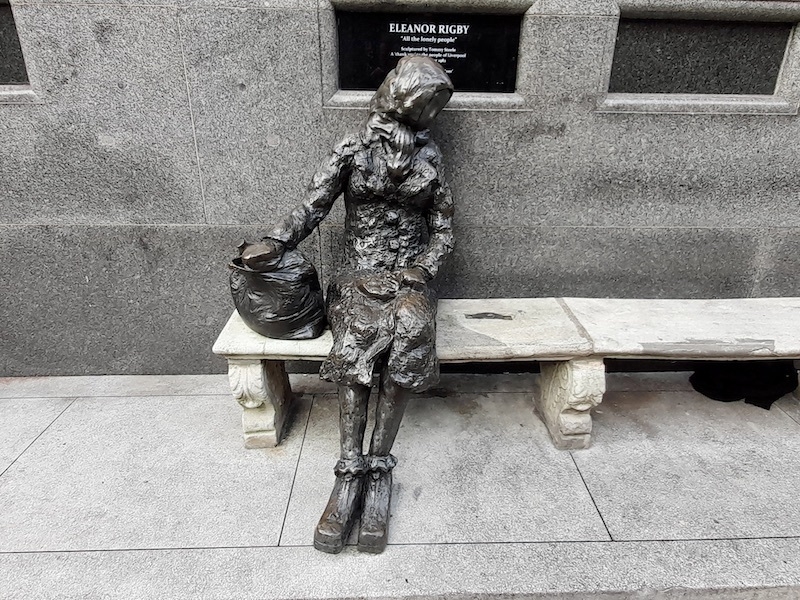 Tommy Steele’s Eleanor Rigby has also been inscribed with little patterns on her coat. The statue was erected in 1982 as a tribute to the Fab Four. Seeing as this is one of the better statues we have - it always reminds me of my gran - I’m not so sure about these "redressings". 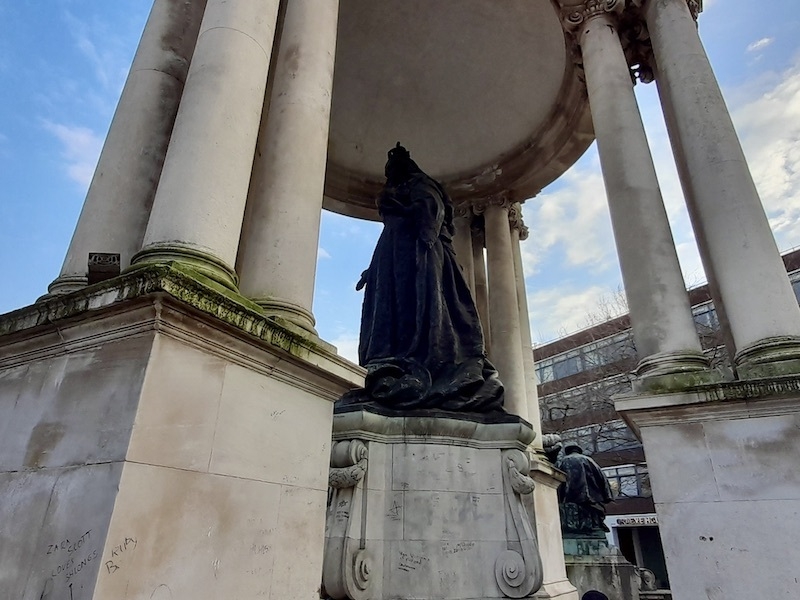 Prominent outside the law courts and with a view down Castle Street towards the Town Hall - although she’s looking towards Liverpool ONE for some reason - is Queen Victoria again, much older this time, resplendent in all her majesty. Although, if you ask anyone about this statue, they’ll tell you that if you look at it from a certain angle, Vic looks like she’s got her knob out. 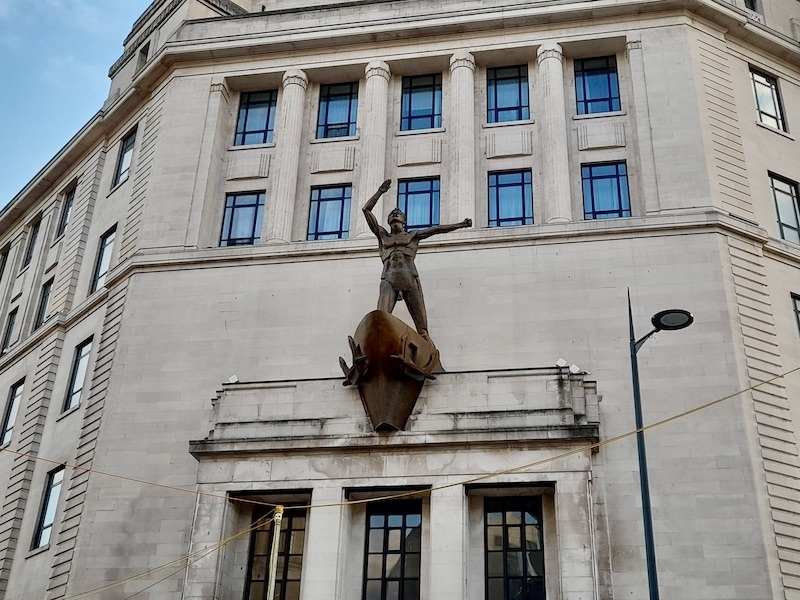 Talking of which, Dickie Lewis. Liverpool’s most famous streaker may not be needed anymore to terrify young girls with an education in the male anatomy thanks to the internet. He’s also misnamed as the building isn’t called Lewis’s anymore, but he’s still greeting everyone who throws open the curtains of their room in the Adelphi hotel. Dickie never changes his aggrieved demeanour, even when Bob Dylan stayed there. 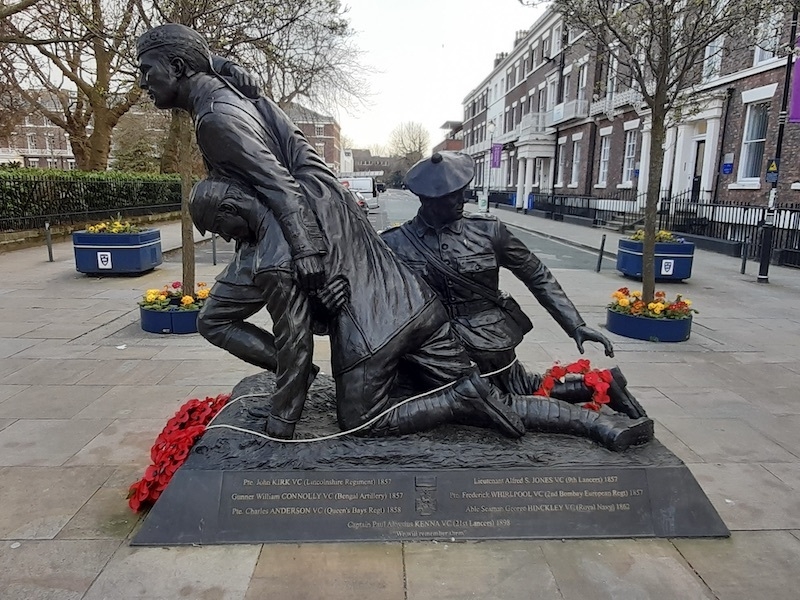 At first glance, this statue appears to be a tribute to Liverpool war hero and double Victoria Cross winner Noel Chavasse, but it’s actually a monument to all Victoria Cross winners from Liverpool, with their names listed on the plinth. The story of Chavasse is fascinating, though. He was the son of the Bishop of Liverpool who didn’t fight in the First World War but was a doctor who regularly went out into No Man’s Land to rescue wounded. He died in 1917 from his many injuries.

Read next: The true stories behind Liverpool’s statues: Part I

Read again: Get up, stand up - Bob Marley statue unveiled in Liverpool