‘Getting hygge with it seems like a step too far’ - The Monro, reviewed

WHEN it comes to pubs, I am a sucker for boozers with a colourful past. Kudos if sailors once sank tankards here, and bonus points if a plot to steal diamonds was hatched at one of the tables. The more illicit the history the better, to be honest - my experience is enhanced tenfold if I can sense mischief coursing through the walls.

Who wants to root around in a curry with their fingers?

As such, I had high hopes for The Monro on Duke Street, a pub that’s been quenching the community’s thirst in one guise or another since 1817. Back then, it supplied local houses with fine ales for the enjoyment of ship merchants who came and went with the tide.

These days it’s a gastropub geared towards millennials who come and go in an automatic Honda Jazz. In essence, times change but what we want from a pub stays the same.

And it’s this that makes stepping into The Monro such a heartwarming joy. Hosted in a Grade II listed building, it looks and feels like a proper pub should. There’s a roaring fire spitting and crackling near the entrance, Liverpool-inspired memorabilia hung on the walls, and carpets that sit just on the right side of reassuringly sticky.

On a chilly Wednesday night in deepest winter, it feels like a refuge from the world, and there are few feelings better than that. The owners have chosen to push the concept of “hygge”, that indescribable Danish buzzword that did the rounds about half a decade ago.

Tartan blankets drape from the ceiling and bobble hats slouch over picture frames. I understand the desire to emphasise the building’s innate cosiness but it’s such a cool pub in its own right it would make sense to keep it simple. "Getting hygge with it" seems like a step too far.

Away from psychoanalysing the decor, we plunge into the menu, which as one would expect from a gastropub, is pretty extensive. It takes us about 15 minutes to decide what to have, only to be told that none of the widely advertised vegan menu (aside from the burger) is available tonight. They had plenty of their ground-breaking vegan calamari this morning, I’m assured by our server, but now it’s run out.

I ask if the full vegan menu might be available tomorrow since I’m quite keen to try it, but receive an unemphatic “probably not”. The moral of the story being: call ahead if you specifically want to try the vegan menu.

So, back to the drawing board. Eventually we opt for the classic piquant prawn cocktail (£7.25) and the Calabrian gnocchi of garlic and wild mushrooms (£6.95).

A healthy pile of prawns, topped with what looks like caviar (can it be caviar? Probably not) arrives smothered in Marie Rose sauce on a bed of lettuce alongside a slice of lemon, two generic white bread rolls and two lumps of butter. The sauce is creamy with a slight kick, as described on the menu. But otherwise there is nothing in particular to shout about. I think they discovered that back in the ‘70s though, even when prawn cocktail was still popular.

The gnocchi is a little more interesting, largely because it’s clearly spent quite some time in the frying pan. The shells have a nice crispy finish but the insides remain fluffy and light, just as I like it. The accompanying mushrooms are plump and juicy and swathed in a rich garlic sauce. It’s hearty and filling, good stuff.

We pass time waiting for the next course by merrily singing sea shanties and sharing tales of life at sea, an imagined activity spurred on by my second glass of Malbec (£6.90).

The mains arrive and they are huge. I’ve chosen the Malaysian sea village cod loin (£17.95), which is billed on the website as one of the pub’s signature dishes. The primary ingredient is a thick, tomatoey curry sauce with a stack of soba noodles and two king prawns buried beneath it.

Perched on top is a well-cooked piece of cod with skin that would benefit from a bit more snap. Flavour wise, there’s nothing wrong with this dish per se, but I can’t get my head round semi-flaccid noodles on the same plate as a curry this dense. Similarly, I find it strange to serve the prawns (which taste heavenly) with the shell on. Who wants to root around in a curry with their fingers?

My partner’s eight-hour braised lamb shank (£16.95) falls off the bone, as you’d hope, and is served on a giant pillow of buttery mash that’s swimming in a robust, rich gravy. The side of vegetables consists of some crumbling carrots and one floret of broccoli, but overall it’s a satisfying option.

There’s little room for pudding by this point but for the sake of propriety we share a chocolate brownie (£6). It comes with a scoop of vanilla ice cream and ticks all the brownie boxes: sweet, gooey, chewy. It’s possibly the best dish of the night.

I can imagine this place thrives on a Sunday when punters pile in hoping for respite from the elements and a roast dinner to fill their boots before staggering home.

Indeed, The Monro has an existing blueprint for the perfect pub, but right now you don’t need a telescope to see that its essence has been a bit lost in the fog. 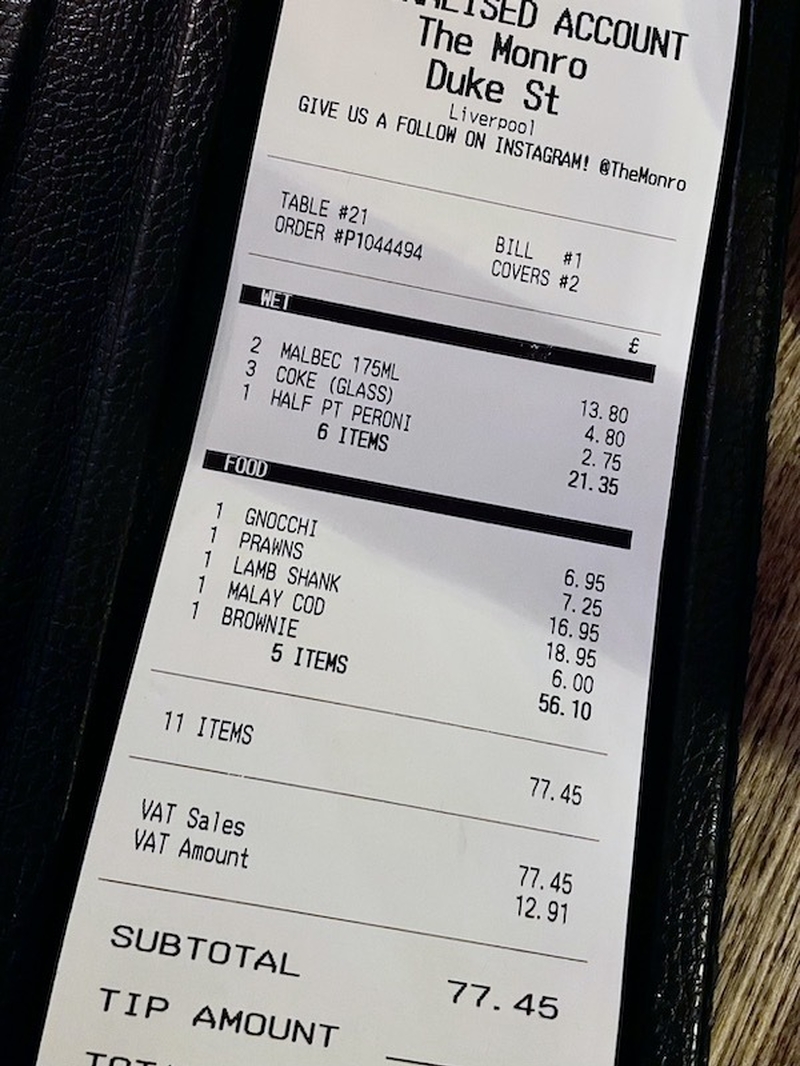