Ten of the best Irish pubs and bars in Liverpool

Did you know: Liverpool has the strongest Irish heritage of any city in the whole of the UK? And did you know: more than 20% of the Liverpool population was Irish by 1851 and today, more than half of the city’s residents are believed to have Irish ancestry?

In fact, the Scouse-Irish affinity is a colossal part of Liverpool’s cultural DNA. However, I’m going to hazard a guess and assume you’re not here for a history lesson… You’re here for good craic and a well-pulled pint of Guinness, right? Grand. Let’s get down to business and stop arse-in’ about then.

Here are ten of the most popular Irish bars and pubs in Liverpool city centre. Sláinte!

Garish green exterior. Gold lettering. A name like Shenanigans. A giant mural of a ginger-haired docker painted on the side of the building, inspired by the 19th century connection between Liverpool and Ireland. It surely doesn’t get more Irish than that?! Oh, wait, it does. I just clocked the "Irish Flag" and "Irish Cookie" options on the shots menu. Keeping it wholesome? This independent Irish pub/eatery down in the Business District also does a mean Sunday Roast and a bangin’ all-day breaky. There's a rooftop bar too.

This place is all about “keeping music alive”, with Irish pop, rock, country and folk featuring heavily on its soundtrack - but they know how to keep you well fed and watered too. The food menu features a traditional Irish stew, a full Irish breakfast and a selection of "Mega Sandwiches", so there’s plenty for you to soak up all those cocktails and draft beer with. Wind your way down here on a Tuesday evening for Trad Tuesday - an open mic night celebrating all things Irish culture, language and music.

No compilation within this category would be complete without paying homage to Flanagan’s Apple - self-branded as the original Irish pub and promising “the best Guinness in town”. The famous Mathew Street venue was refurbished in 2019 to combine a modern aesthetic (neon lettering, ooh!) with the traditional vibes it’s renowned for. Three floors facilitate food, drink, live sport and live music seven days a week.

Owned and run by Lanigans Bar Kilkenny, this is an Irish bar with real authentic roots. What’s more, they also have bragging rights to what is apparently the largest LCD video wall in the entire city. And you know what that means? Live sport on the big screen, ahoy! The bar is stocked with all the usual suspects, alongside a line-up on Irish whiskeys, gins, beers, porters and of course, the "blonde in the black dress" (Guinness). Enjoy live music Monday-Sunday and live DJs every Friday night.

Real talk: if you’re looking for somewhere classy, this ain’t it. This lively Irish bar is the life and soul of the party, home to a mechanical rodeo bull that kicks into action every Saturday from 3pm ’til late. Get your fill of live music, live sport and cheap drinks, including cocktails such as the "Ginger Goth" and "The Green Bhoy".

If you’re looking for a session of unabashed day drinking that rolls on into the wee hours, you’ve hit the jackpot. The infamous Concert Square venue is located slap-bang in party central - a converted warehouse now filled with pool tables, TV screens and plenty of space for throwing shapes. Food is served breakfast through dinner - pub grub style - and the bar delivers a diverse array of options, from tap beers to premium cocktails.

Also owned by the lovely lot behind Lanigans is Fitzgerald’s - a go-to venue for live sport, live music and plenty of great drinks. Multiple screens promise “the best sports viewing experience possible”, while an eclectic roster of live entertainment covers everything from traditional Irish music to current bops. Open until 4am, seven days a week - perfect for the wild ones amongst us.

Less of a pub and more of landmark, Pogue’s is not one to be missed off your Liverpool Irish pub crawl. Situated at the very top of Seel Street, this place is renowned and treasured for its authentic atmosphere. The crackle of a roaring fire and the aroma of soggy beer mats meet the comfort of well-worn leather armchairs to create a multi-sensory experience you won’t forget. Stick around for live sport, live music and a proper pint of Guinness.

We’ve got bars and pubs on this list with all the bells and whistles. We’ve got a mechanical bull, themed shots and a wall mural. The Liffey sits on the other end of that spectrum. This is a local gaff frequented by regulars who will probably tell you to “feck off!” if you stand in the way of the horse racing on screen. This isn’t an Instagram filter, this is the real deal. Come for hella cheap pints, stay for the karaoke craic, the undeniable charm and the laidback atmos. 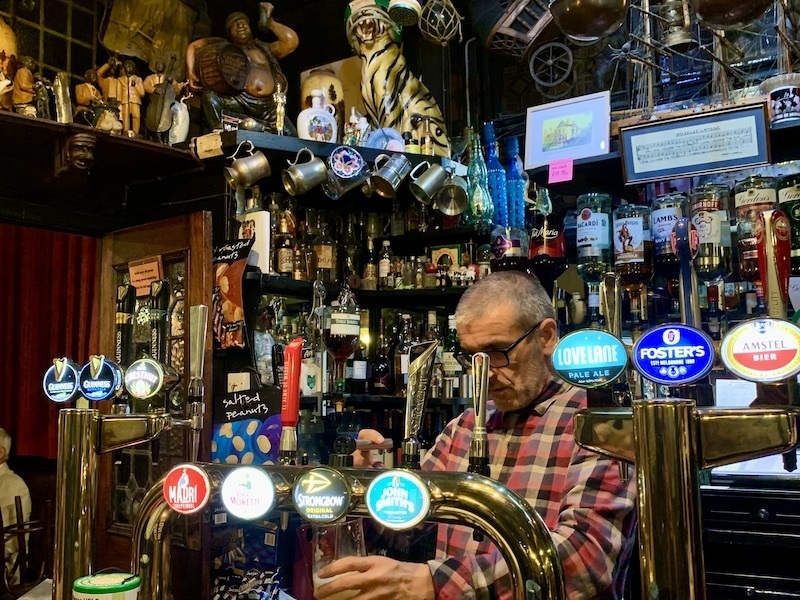 Named after its licensee of 1897-1950, this popular establishment is steeped in history. The building itself is more than 160 years old and legend has it, so are some of the regulars. Current landlady, Rita Smith, has been here for more than 30 years. She proudly says that this is the pub for everyman; Quentin Tarantino has been in for a pint: “When are you going to make some nice films?” Rita asked him. His response is unknown. Go for the local ales and rotating guest beers, stay for the kitsch woodwork, Dickens-and-Hogarth-inspired murals and regular Irish music sessions.