‘Taking earthy pub charm to the next level’ - The Blackburne Arms, reviewed

AS a student in Liverpool I lived in a few different neighbourhoods; Kensington, Fairfield, Wavertree, Toxteth. My first proper job after uni afforded an upgrade from shared house living to a studio flat in olde worlde St Bride Street amid the cosmopolitan world of Canning.

When the steak and ale pie arrived, I wasn’t sure whether to eat the grand pastry lid or wear it

“Don’t be waking the baby up in the middle of the night with that thing,” Scouse Ma had shouted at me from across the cobbles, as I unpacked boxes of records and saucepans from my 1969 Volkswagen Beetle. To clarify, this was the 1990s, not the Sixties. Christ, I’m not that old. But the Beetle did sound like a knackered helicopter, that much was true.

The haunting shell of the children’s hospital that I used to walk past everyday has long gone. Myrtle Street parade, once a no-go zone at night, now has a wealth of well-stocked Asian stores, alongside the obligatory Tesco and KFC.

The Georgian Quarter’s Hope Street in L1 is the epicentre of fine dining, but walk 100 metres to Catharine Street in the edgier postcode of L8 and you’ll find some of Liverpool’s best boozers.

The Blackburne has been around for more than a century although most of the name changes seem to have been in the last decade. Current owners Stephen and Lena Sinclair worked right through all of the COVID-19 lockdowns to provide takeaway and delivery services.

I remember driving past thinking they must have been selling loo roll from that front window, when actually it was the queue for takeaway Sunday roast dinners.

“Gastropub” might sound like something you’d moan about on the phone to your GP, but the term was actually coined for pubs that want to provide quality food alongside the drink. The Blackburne has achieved that for the best part and head chef Tom McMurrie has come up with a brave selection of dishes which would all pair well with a pint of Docklands or Rock the Boat.

We visited on a Saturday evening when the bar was typically busy. Service was still swift though, and our host was keen and confident in recommending some dishes.

When they said the onion bhajis (£5.50) were “to die for”, I didn’t expect them to arrive cremated.

“Do they usually look like that?” I asked the fella as he put them down on the table.

“Do you want me to replace them?” he said. Realising that another question would only prolong the argy-bhaji, we agreed on some fresh ones. The second version was much better and gave plenty of salty crunch and spicy stodge to accompany my pint.

Nicely browned salt and pepper calamari (£6.50) was made to look surprisingly pretty, scattered with red onion and coriander and a sidecar of sweet chilli mayo. It was another good beer banger with plenty of salt, sweet and sour to tickle the taste buds.

I’m not really a pie-person but wanted to try the signature dish of steak and ale pie (£14). When it arrived, I wasn’t sure whether to eat the grand pastry lid or wear it like a beret.

The meat was juicy, well-seasoned and tender with a satisfying gravy, and the pastry a feat of engineering, delicately crisp and layered. Jenga chips are not for me, and these definitely seemed rather on the well-done side, but the carrots were nicely caramelised and the whole dish just needed a splash of greens to give it a big tick.

One of the more expensive dishes on the menu, the lamb rump (£16.50) had the least confidence. The lamb was nicely pink in the middle, balanced on a bed of feta mash and roasted carrots with a dark jus, tangy pickled shallots and a sprinkle of fresh coriander; all the separate elements tasted fine but it felt like the concept behind this plate of food was as mixed up as its presentation.

Two courses and a couple of pints had me struggling to think about pudding, but we shared a pot of Black Forest mess (£7) that was childish and cheeky in equal measure. The cheese board from Liverpool Cheese Company would probably have paired better with beer, but there’s always next time.

I don’t live in this part of town anymore - I’m not sure I could afford to now - but the pubs here still feel like home. The Blackburne is one of the best, managing to satisfy both longstanding locals and people just passing through. If you’re visiting Liverpool, you can stay the night in one of the newly refurbished and redesigned hotel rooms.

Keep an eye out for film crews too, as this part of the city has featured in Peaky Blinders, The Irregulars, and Victoria. If you listen carefully, you’ll hear Scouse Ma shouting at them not to wake the baby up. 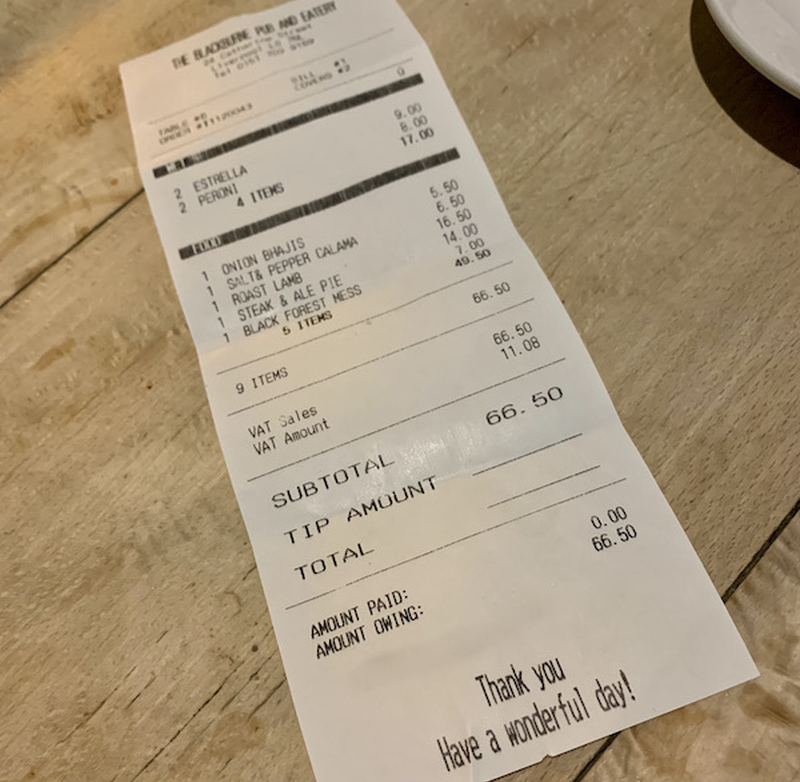