Back To Reviews
● / Spanish

Being from Liverpool is, as we locals would say, boss. But being from South Liverpool, I would argue, is even better.

When you live in South Liverpool, you don’t need to go into town for a decent meal because everything you could ever fancy is on your doorstep – massive brekkie on Smithdown, picky bits on Allerton Road, stone-baked pizza in the adorably quaint Woolton Village. But have you ever wandered a little further afield? I’m not talking about Lark Lane. I mean have you ever sauntered down to the shops on Hunts Cross Avenue? I’m not joking, honestly. Carry on reading…

Sandwiched between a chemist and hair salon and a newsagent and chippy, there’s a small double-fronted premises with a simple red-and-white sign above the door: ‘Sabrosa: Spanish tapas restaurant’. I don’t know about you, but I’ve never encountered a tapas restaurant on any other row of local shops in Liverpool, so I did some asking around and – after hearing several good things – felt compelled to give it a try.

We came on a Thursday evening and the place was chocker. Sabrosa is far from fancy – you’ll find no fine tableware and the menu is a simple piece of laminated paper – but it’s rustic and authentic. It’s also tiny, seating no more than 30, and the kitchen can be seen behind a wooden crated shelf, which acts as a sort of wall to the quiet chaos going on behind the scenes.

Like all good Mediterranean meals, we began with a selection of bread and dips (£3.75). There was no drinks menu, so we played it safe and ordered a couple of beers (£3.50) – because life is too short for drinking bad bevvies. I did find it odd that a restaurant would be lacking a proper wine list, but it soon transpired that Sabrosa welcomes the BYOB rule – which is a handy perk considering there’s a carry-out in the next parade down.

Back to the food and we went all out, ordering a decent selection of tapas dishes, all of them generously portioned and almost all faultless (maybe give the tortilla, £4.95, a miss; microwaved to within an inch of its life, it had a texture like a piece of felt you might find in your old craft box). I’ve said it before and I’ll say it again, you can usually judge a Spanish place by the quality of its patatas bravas – and Sabrosa’s (£4.75) surpassed expectations. Heavy on the paprika, no chunk of potato without a coating of the garlicky sauce, these bravas were melt-in-your-mouth good.

The meatballs (£5.25) were little forkfuls of juxtaposing flavours – smoky chorizo complemented by a sweet and tangy sauce – while the garlic prawns (£5.50) were simple and moreish, as all classic tapas should be. The grilled goat cheese in its sticky pool of honey (£5.50) wasn’t the most handsome of dishes but we enjoyed it nonetheless. The ham croquettes (£5.50) were unfaultable but fairly forgettable, although that may be because they were quickly followed by the garlic mushrooms (£4.75) – another simple one, but a stand-out dish nonetheless. For someone who isn’t a huge lover of black pudding, I was pleasantly surprised by our final dish of morcilla and Padrón peppers (£5.25), the sausage heavy on the cumin and speckled with rice.

For a random little restaurant in the most unpredictable of places, I was endeared by the no-frills dining experience at Sabrosa. Like the nature of its whereabouts, Sabrosa is a local affair – a labour of love existing only to bring a local tapas culture to the even more local streets of Woolton. And usually I’d say the phrase ‘a hidden gem’ is a massive cliché, but for the first time now I understand what it means.

Even writing this review, I feel like I’m revealing some sort of secret dining club, exposing a hidden institution to the hungry masses of Liverpool. But as The Hunger Games author Suzanne Collins once said, some secrets are too delicious not to share – and I have a feeling this little Spanish offering won’t be under the radar for long. As for me, all I know is, next time I head down to the shops on Hunts Cross Avenue, it won’t be for chips and gravy. 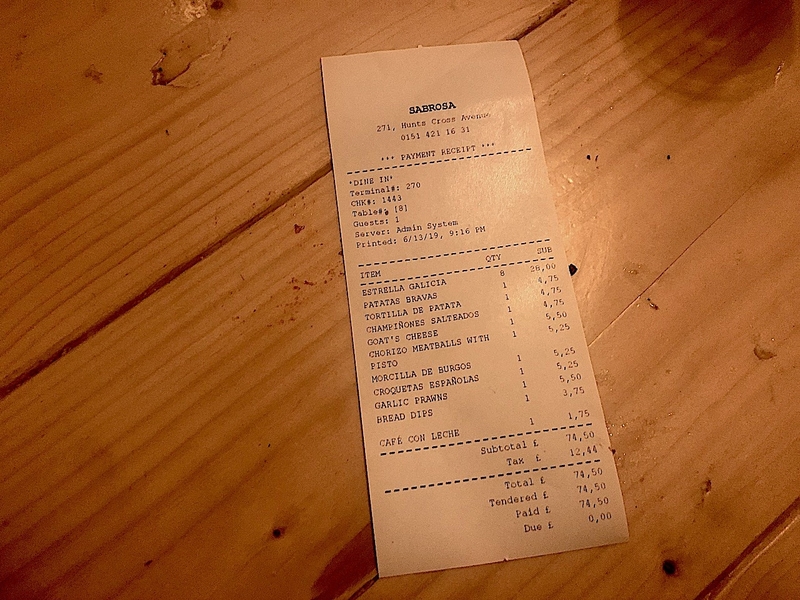