The theatrical happening of the year - but is it heroic? Phew and, er, yes 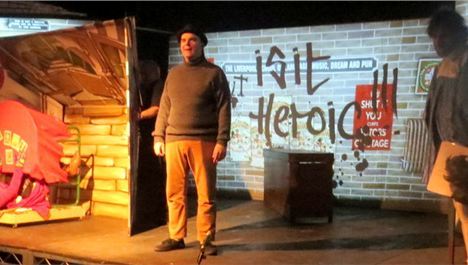 THEY swept into town in their hundreds, coming from far and wide. Snaking around the block, down the road and back up again, their sudden arrival taking everyone by surprise.

The occasion? A Premiership football game perhaps? After all, it was a Saturday afternoon. No, although the asking price for a ticket wasn’t far off.

Remarkably, these paying punters were putting their faith in an unknown quantity: a play. Yes, a play. One with no famous actors, with no previous. And this play was not being hosted by any of our establishment theatres. Even the Arts Council did not want to know.

The proposition: a four-hour marathon dealing in chaos and discord. And like all right-thinking anarchists, these people had formed an orderly queue.

Cosmic Trigger I - The Last Secret of the Illuminati, to give it its full title, has been brewing all year. Liverpool Confidential has covered the project’s journey from zeroic to heroic. Well someone had to.

Written and directed by Daisy Campbell, daughter of the late, great Ken Campbell, its world premiere was at the heart of an ambitious and extraordinary three-day weekend, just gone, featuring activities, lectures, debates, art and performances. Camp and Furnace was chosen as the venue.

Campbell Snr, who died in 2008 aged 66, drawled many mantras, one of which was “If you want to get something done, go to Liverpool”.

On February 23, this year, his daughter took him at his word. She arrived from Brighton, planting the Cosmic seed, enlisting the goodwill of that strata of unsung heroes in Liverpool who operate off the mainstream’s radar and who really are the people who make things happen.

Exactly nine months later - and one successful crowd-funding appeal for £23,000 to mount the production - the baby was birthed.

On Sunday, Ms Campbell consummated the “caper” with a joyous surprise (or drastic action, depending on your world view). She got hitched, at 6.23pm, to long term partner and actor Greg Donaldson, in the Camp and Furnace. The nuptials were tied in front of an unsuspecting audience that included her mum (actress Prunella Gee), stepdad Tom and two children, Dixie and Django. Everyone sang “Daisy, Daisy, give me your answer do,” and staggered off into the night.

Timothy Leary and the gang get orange jumpsuit funky in jail

In the meantime, Campbell had managed to deliver a brave and glorious piece of theatre, choppy as hell in places, but which served only to enhance it.

Tragedy, laughter, tears, sex, more sex. Drugs, more drugs, paranoia, science, grief, Aleister Crowley, aliens, Timothy Leary, William Burroughs and a black mass. And at the heart of Cosmic Trigger a terrifying reminder for anyone who finds comfort in the notion that the global order is run by secret societies, the CIA or the Illuminati: there is no world order. There is no conspiracy. Rather, we are merely flecks of cosmic dust who love, lose, laugh, cry. And have sex.

It's three acts,  beginning with a naked lady and a film of Alan Moore, narrating as supercomputer chaos generator FUCKUP.

But it's the superb projected CGI sets from Scott McPherson and flawless, confident acting which quickly pull you into the vortex. None of it was played with a straight bat. Much of it was mesmerising.

That’s the short of it, if you want detail we will be here all day. But anyone who saw Ken Campbell’s 1980 production of The Warp, at the Everyman, or his earlier Illuminatus! will instantly recognise the shards of brilliance that calculated risk brings.

The Sunday wedding came exactly 38 years from the day that Campbell Snr’s Science Fiction Theatre of Liverpool first messed with the heads of the people, using the power of story and performance to invoke gentle, lingering, mind-altering magic.

Illuminatus! when it premiered on November 23, 1976, on the first floor of the Liverpool School of Language, Music, Dream and Pun in Mathew Street, changed everything.

Its company, founded by Chris “The Thick of It” Langham and Campbell, included wife Pru Gee as Eris (Daisy is said to have been conceived backstage), Jim Broadbent, Bill Nighy, the KLF’s Bill Drummond making sets, a teenage Ian Broudie in the band, Jayne Casey, Allan Williams, Terry Canning and David Rappaport. Eleven hours long, rave reviews followed. Sir Peter Hall commissioned it to open the new Cottesloe Theatre at the National. After that, nobody looked back.

Well unless your name was Robert Anton Wilson. Cosmic Trigger is his story.

Wilson, American, an editor at Playboy from 1966 to 1971, was responsible for The Illuminatus trilogy of books, co-authored with colleague Robert Shea.

Cosmic Trigger plots the irrevocable trajectory of Wilson’s life after he meets Kerry Thornley, a green inker who writes letters into the magazine under a variety of aliases. Thornley, who served for a time in the US Air Force with Lee Harvey Oswald, had amused himself by inventing a parody religion, the Church of Discordia, which was the subject of many of these letters.

Discordians were required to worship Eris, Greek goddess of chaos. Wilson and Shea bought into the game and took it one further, by turning it into the Great American Epic Novel. It was the richest of literary pranks.

Later, The KLF drew from exactly the same well, honing another of the Illuminatus’s spoof secret societies, The Justified Ancients Of Mumu. But instead of a book, they harnessed the medium of pop music. It sailed right over the heads of most of their fans who bought their records in zillions. But that is another story.

Yet the connections persist: even the Cosmic Trigger poster for Liverpool is designed by Jimmy Cauty and Drummond’s miniature Illuminatus! sets are rebuilt from original plans which he still has knocking about in a drawer.

And parallels too: Back in Wilson’s world of “Chapel Perilous”, Thornley’s own Discordian joke is also ultimately lost. It is consumed by his paranoia, some of it stoked by drugs, some from being hauled up in front of the Warren Commisssion, investigating the death of JFK.  He was banged up by Jim “conspiracy theory” Garrison for perjury.  No one was laughing any more.

Meanwhile, Wilson makes friends with the LSD king himself, Dr Timothy Leary, who, when asked what do you do after you’ve “turned on, tuned in and dropped out”? replied simply, “Find the others”.

Daisy Campbell, luckily, has “found the others”, an ensemble of first rate performers led by Oliver Senton in the challenging role of Wilson who spent a lifetime pushing the boundaries of new age thought (RAW did not believe in anything - other than the certainty that “belief in dogma is the death of intelligence”).

He is broken by the murder of beautiful daughter Luna (a sparkling, mature portrayal by Campbell’s own 15-year-old, Dixie) as is Arlen, his devoted wife. This role is played by Kate Alderton (daughter of another branch of showbiz royalty, John Alderton and Pauline Collins) who turns in an excellent light and shade performance.

Lighting up the stage whenever he appears is Lee Ravitz’s crazed Thornley. And Ken Campbell himself is once again conjured to life by Josh Darcy. His and Claudia Boulton’s terrific, comedic Eris provide clever devices to break the narrative into bite-sized chunks.

Daisy, meanwhile, cannot resist donning a glittery mini-dress, blonde wig and heels to play her own mother, Pru, as the action moves to 1976 Liverpool, and to the National Theatre, to recall how Wilson was invited to play a cameo in the first night of the London run of Illuminatus!, specifically  the black sabbath scene.

The cast clubbed together to pay for his ticket. Wilson never knew.  It was one of many karmic kindnesses that came his way. Later, towards the end of his life and struggling with debt, fans around the world conspired to post hundreds of cheques to him, each for the sum of 23 dollars.

Anyone not au fait with the themes and planning to see Cosmic Trigger in London this week (you should if you can), might want to familiarise themselves beforehand.

There is some expositional dialogue early on between Wilson, Shea (Tom Baker), Thornley and Burroughs. And while it does give a handy explaination of such theories as the Law of Fives and the significance (or not) of the number 23, it is more an expert’s sprint than a novice hurdle. That said, there is a lot of ground to cover.

The Cosmic Trigger was squeezed with relish at the weekend, greeted with genuine warmth by a capacity crowd and not an air-kiss in sight.

Still, it is a pity that more of the people who should have seen this simply couldn't afford to. But, the producers say, that is what happens when public subsidy isn't forthcoming.

And on the other side of the coin, when public subsidy isn't forthcoming you, and your values, are owned by no one.

Already there have been approaches from cities around the world eager to stage Cosmic Trigger and, after London, the company may never look back.

Take a bow, Daisy. You pulled it off.