THE bombed out church as a boutique hotel and wedding venue? That’s the latest idea for one of Liverpool’s best known and loved buildings.

And if the wrath of God is currently awaited, the council’s Lib Dem leader Richard Kemp and local heritage campaigner Wayne Colquhoun have pitched into a debate which is rapidly becoming a plague of locusts.

“The bombed out church is cherished for what it stands for, as a memorial to those citizens who lost their lives in the Blitz on this city. Transforming it into a hotel and wedding venue does not respect the heritage of the building and all that it stands for,” said Councillor Kemp.

'You can't just give away the city's treasures to the first person who comes along with a few bob and says hand it over or it will fall down. It is not scouse Pound Land' - Wayne Colquhoun

“It has earned its place as a time warp and nothing should happen that disrespects what it stands for. If it can’t remain as a roofless bombed out church you could say you might as well pull it down – though I would be the first to fight such a move.”

It has emerged that Lawrence Kenwright, the man restoring the old White Star Building, Albion House into a luxury hotel, is the mystery developer who has proposed this scheme for St Luke’s.

He envisages a new roof and a hotel with a bridal suite complex and wedding venue within the church walls, made out of glass, with steel beams that would support the existing structure and “keep it up for another 100 years”.

Wayne Colquhoun, who runs the Circa 1900 antiques shop, in the India Buildings, concurs that urgent action is needed to stop the building from collapsing but says: “St Luke's is regarded by the nation's watchdog, English Heritage, as a monument to the war dead.

“Sometimes some things are not objects to make profit from.”

Mr Colquhoun says the Leece Street consecrated church, built in 1811, has been on the English Heritage “At Risk” register for more than a decade owing to the state of its interior.

“This building was originally left as it was to commemorate the Blitz so as a result it has been left open to the elements,” he said.

He added: “Like the 25,000 people who have signed a petition, I want to see it stay how it is, but I do understand that, in the long term, if it is to stay up it has to have a roof on it.

“Unfortunately, when you put a roof on a building that hasn't had a roof on it for a long time, it is going to spread the building. So just on a practical level, putting a roof on St Luke's is one of the most dangerous things you can do.

“What they would indeed have to do is make a frame with columns inside and beams across to support the glass. It is an extremely delicate job and from what I have seen, I doubt there is an architect in Liverpool who could perform such a delicate job while retaining the building's integrity and its solemnity."

“I am not even sure if Mr Anderson knows St Luke's is on the English Heritage At Risk register.

“I noticed he originally said somewhere that he would sell it off for £1. Well they sold St Andrew's church off for £1 and look what happened there.

"Since when did the Mayor become a property developer? You can't just give away the city's treasures to the first person who comes along with a few bob and says hand it over or it will fall down.

“It is not scouse Pound Land."

Mr Colquhoun said that the building was  Grade II* listed "so even to alter one brick inside or out needs a planning application. People are now debating changing it into a boutique hotel, but the final say goes to English Heritage. And if English Heritage say it must remain as a memorial to the Blitz, it's unlikely it will happen.” 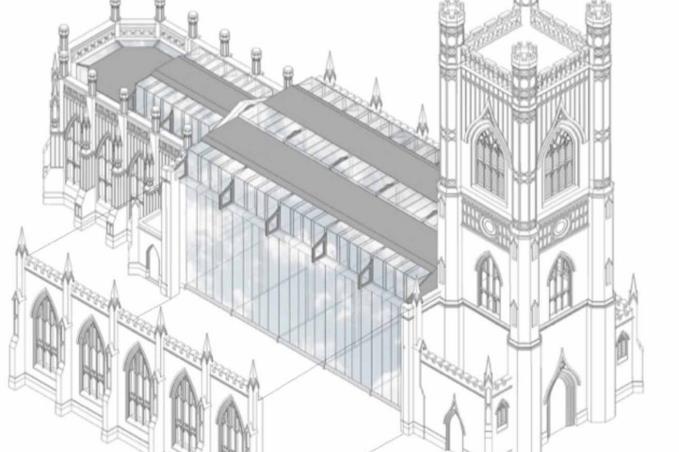 The current custodians of the building, arts collective Urban Strawberry Lunch, last week told Liverpool Confidential that they had first call on coming up with a scheme for the building after hearing on the news that building was up for sale. They want to create a Community Interest Company to keep it as a community space and have received backing of, among others, Yoko Ono and Holly Johnson.

St Luke's was designed by John Foster Senior and built by his son, John Foster Junior, who designed St Andrew's in Rodney Street too.

Meanwhile, Cllr Kemp has written to the city council calling for a new trust to be established to act as custodians of the bombed out church.

“We have a trust set up at St George’s Hall and this could work on similar grounds, able to raise money and introduce commercial users that respect and are in keeping with the ethos of the church and all that it stands for.

“I hope the Mayor of Liverpool quickly rejects the hotel proposal out of hand so we can have a sensible discussion about its future. Within days 25,000 people signed a petition wanting the church to be preserved more or less as it is, with sympathetic use.”