Megan Walsh attempts to wean a carnivore off meat for a day. But does it work?

THE planet isn’t well, and my environmental anxiety has reached a fever pitch – so much so, that I am making a conscious effort to reduce my carbon footprint by applying a more plant-based approach to the majority of my meals.

I’m accompanied by the biggest meat-eater I know, ready to bring him over to the dark, leafy green side

I’ve even started being a bit preachy about it. Not in a Greta Thunberg ‘you’re stealing my childhood’ kind of way, but I am trying to encourage my nearest and dearest to give up their ‘no meat, no meal’ mentality. Much to their dismay, I am determined in my efforts to make them see that a plant-based diet is just as good as your meat and two veg. It’s working in parts, but today would mark my toughest challenge yet.

I’m at new plant-based place Meatless on Smithdown Road, and I’m accompanied by the biggest meat-eater I know, ready to bring him over to the dark, leafy green side. He’s here reluctantly, of course, but I’m hoping all that will change. Inside it’s small, cosy and completely innocuous. There’s nothing preachy vegan about the place, just a big leafy wall mural and friendly bunch of staff ready to answer all of your plant-based questions. So far, so good.

I decide on something safe to get things going on the right foot, ordering hummus and pitta (£4.50) to start. I really want it to be good. After all, hummus is a staple vegan food, and we are in a vegan restaurant. I really want it to be good – but it isn’t. It lacks depth and it really lacks flavour. There’s a lot of cumin, but not enough salt: and certainly not enough tahini. I hate to say it, but the pomegranate garnish probably delivered more of a punch than what lay underneath.

We eat it anyway because it isn’t terrible, just rather forgettable and bereft of flavour. I’d recommend the sweet potato wedges instead because they looked (and smelled) absolutely banging. It isn’t all bad, mind you. My chickpea Buddha bowl (£10) is dreamy; melt-in-your-mouth sweet potato falafel among a kaleidoscope of colours, textures and tastes that make up for what was missing in the hummus.

Unsettled by the concept of a Buddha bowl, my carnivorous companion goes for the meatless burger (£9.50). He isn’t impressed, complaining about the texture and deciding after a few bites that it’s simply too mushy to finish. I like mush. So, in my gallant efforts to provide you with the most impartial review possible, after I’d finished the entirety of my Buddha bowl, I go in to tackle the burger. Mushy, yes. Flavoursome? Yes… but I can’t quite decide if I’m really enjoying it or not. The patties have a real smokiness to them – bringing familiar notes of bacon to mind – but the whole thing seems a little bit flat. The cheese, like all vegan cheese, is plasticky, and the fries bang average. This lunch is not going to plan.

Stuffed from my two meals, but desperate to prove my point that veganism is delicious, I insist on a dessert to share, saying a prayer and ordering the peanut butter brownie (£3.50) with a couple of hot drinks. And while the coffee (£2.40) is pretty poor, the brownie is a showstopper, receiving the seal of approval from the disgruntled meat-lover and saving his day from being a complete disaster.

Meatless has the potential to be great. I just think on this occasion, with the exception of my Buddha bowl, and the brownie, we ordered the wrong things. Maybe a meatless burger for a meat-lover was an ambitious move. And maybe the hummus was just having an off-day. I don’t know, but there was something missing. And no, before you say it: it wasn't the meat.

All in all, this vegan lunch wasn’t quite the evangelical experience I’d had in mind. Did I convert the carnivore? Not entirely, but he did say he would be back to try one of the bowls, now that he knows what a Buddha bowl actually is. And that’s an achievement in itself, isn’t it? A meat-eater actively planning his next visit to an entirely plant-based restaurant. It’s a baby step, but I think my work here is done. Power to the plants. 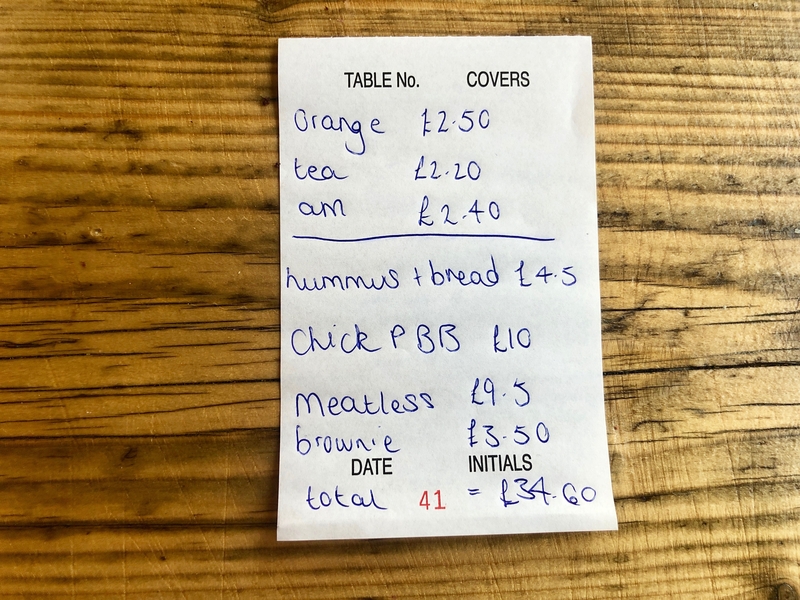