Despite Liverpool’s, shall we say, controversial history, there are no shortage of statues around the place, commemorating the great and good of the city. But with a backlash against what they may or may not represent, are Liverpool’s statues up for re-assessment? Let’s take a look.

(Certain requirements have been imposed on this list, otherwise it would be a million words long. So, for no reason other than brevity, statues have to be of people and be outdoors). 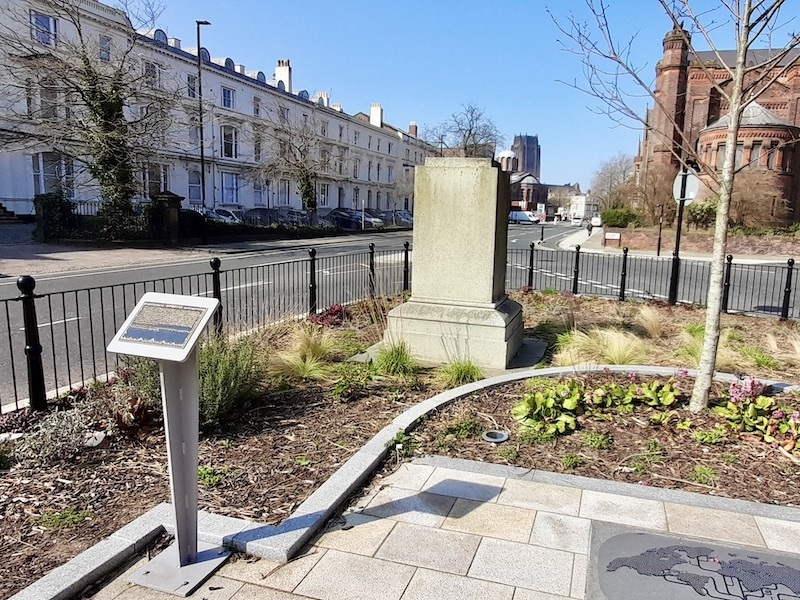 The first statue that we visit isn’t there anymore. In light of the Edward Colston controversy in Bristol, it’s notable that Liverpool did the same thing. Back in 1982. Liverpool has long had a bit of an obsession with William Huskisson, most famously the first man to be killed by a railway engine. There used to be a statue of him in a prominent place on Prince’s Avenue, one of the main thoroughfares leading into the city centre. That it is in effect welcoming you into Toxteth might be the reason why it was taken down 40 years ago.

Huskisson’s local fame was due to him being an MP in various Liverpool constituencies but he was more generally regarded as a financier and President of the Board of Trade. Although he originally voted to abolish slavery, he changed his mind in later years. Hence why his statue was pulled down in the early eighties by never-identified "activists". Unlike the Colston statue, nobody tried to defend this act, and the statue’s plinth was retained, unoccupied, with a somewhat terse plaque explaining why the statue is no longer there.

Supporters no doubt consoled themselves that the great man still had a street named after him. And a monument in the grounds of the Anglican Cathedral. And a different and absurd statue safely hidden away in the gated Dukes Terrace car park. And another one in the inaccessible Oratory next to the Anglican Cathedral. Liverpool just can’t get enough of Husky Huskisson. 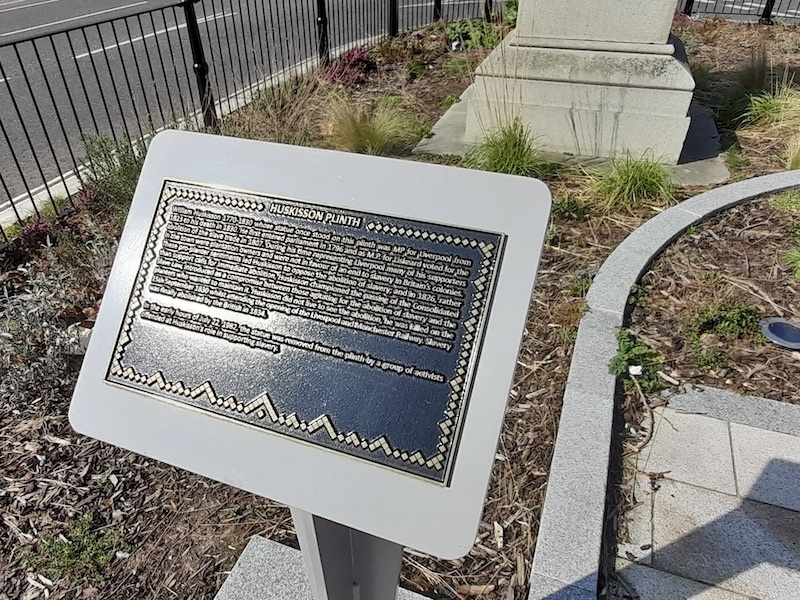 Our next statue is often overlooked, or should that be underlooked, as it is above the grand entrance to the larger of Liverpool’s two cathedrals. This one features the big fella himself and one look at it will make you go "Jesus Christ".  Although not depicted in his usual pose nailed to a tree - it’s called The Risen Christ - this gigantic statue has an odd sense of proportion, with a giant head above quite a stocky body, although those abs are everything you’d want in a messiah. 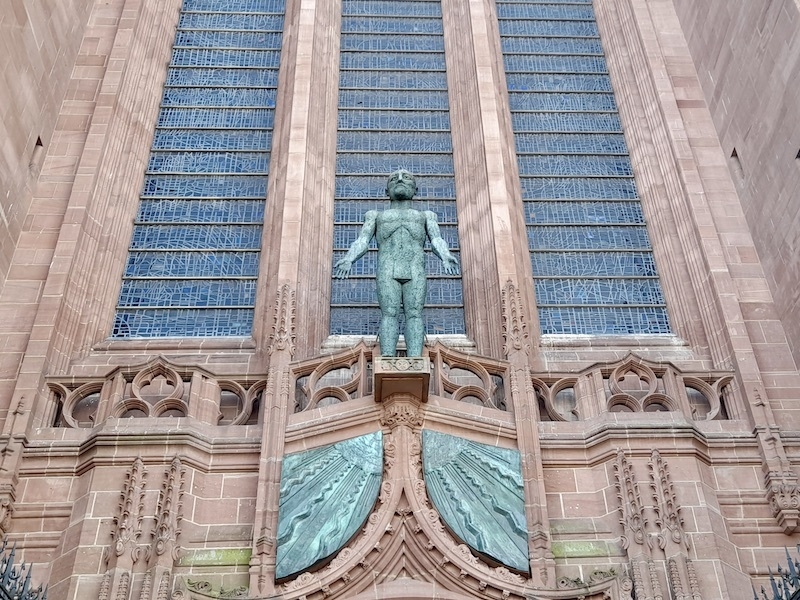 Almost perfectly equidistant between the two cathedrals, and right in the middle of the pavement, smartphone addicts, is a twin portrait of two of the great bishops of Liverpool, David Sheppard (left) and Derek Worlock.

Sheppard was a former England cricketer who went on to become Bishop of Liverpool (CofE) from 1975 to his retirement in 1997, when he opposed apartheid in South Africa, amongst many other things. Worlock was Archbishop of Liverpool (RC) from 1976 to 1996 and did many good things with regard to the Toxteth riots, Heysel and Hillsborough, where he often worked with Sheppard. That two undeniable good eggs should be portrayed as being captured by Boba Fett is one of the city’s enduring mysteries. Hugh Stowell Brown was a preacher from the Isle of Man who felt the calling of Liverpool at the age of 24. He helped the vast numbers of poor in the port throughout his life and was based at Myrtle Street Baptist Chapel, hence why his statue is located not on Myrtle Street but around the corner on Hope Street. 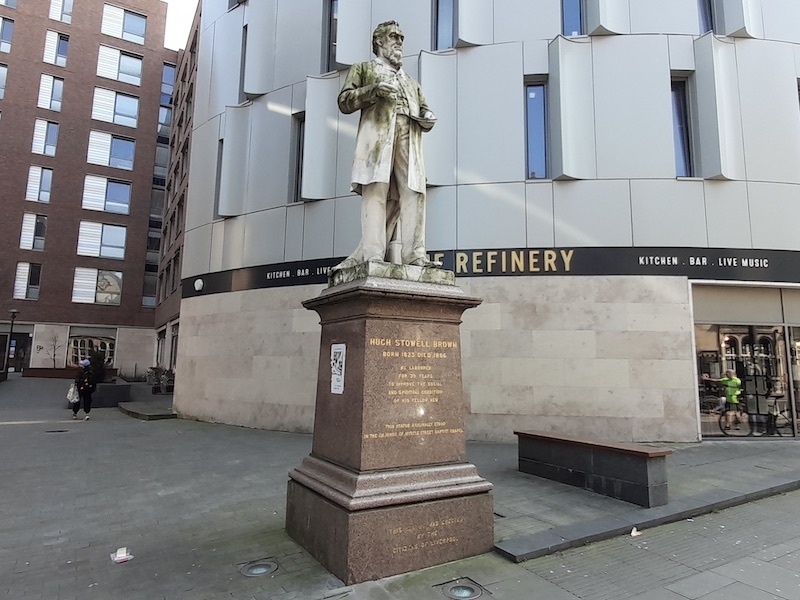 Gandalf? - The University of Liverpool

The only statue I was able to find in the university is this unmarked oddity. There is no clue about who made this or who it depicts, but I think we can all assume that it is meant to be Prospero from Shakespeare’s The Tempest. Or Gandalf. Or Dumbledore. (Editor's note - Confidentials follower Kevin Banks says this statue is in fact the prophet Shemaiah from the Old Testament, by Sean Rice.) 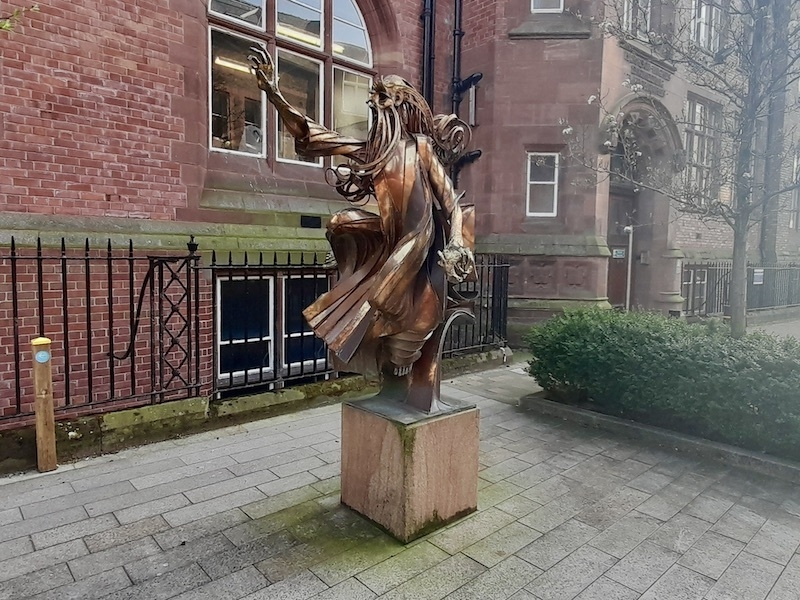 The reason why Monument Place on London Road is so called is because of this incongruous statue, placed well away from his fellow monarchs in the city centre. Perhaps because this statue depicts George III, as played by Nigel Hawthorne what, what, whose reputation is not the greatest.

It’s likely it is only retained at all because it’s by sculptor Richard Westmacott, who also did the Nelson Monument on Exchange Flags, of which more next time. 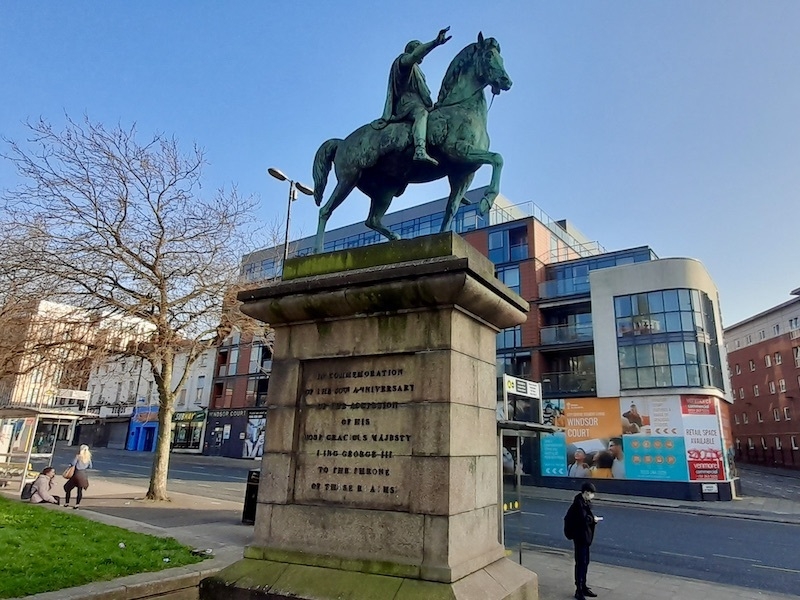 Comedian Ken Dodd and MP Bessie Braddock, as far as we are aware, didn’t know each other. She was a former Communist and Labour MP for Liverpool Exchange (as it was called) until her death in 1970. He was a comedian most notorious for being averse to paying his taxes. Why they have been put together, with Ken looking like he’s about to give her a tickling she’ll never forget, is another one of those mysteries. There was a William Earle from Liverpool who was a slave trader, but this William Earle was a soldier, as depicted in this somewhat controversial statue which shows him treading on an African shield with his sword in his hand. Major General Earle was quite famous in his day for forays in Africa as well as the Crimean War. As the plinth states, Earle was killed in the Battle of Kirbekan (modern-day Sudan) aged five. Queen Vic, gawd bless her, is the subject of this somewhat verdigris equestrian statue. She and her husband are given a prominent space in the city, welcoming visitors across the way from Lime Street station with St. George’s Hall as their backdrop. A notably young Vic is depicted as sternly as every other likeness of her, including the photographs. Albert at least has the decency to take his hat off. There is no evidence that Victoria and Albert ever rode through the city. Both these statues are by Thomas Thornycroft. The title on this statue’s plinth states it is the Earl of Beaconsfield, although you may find the person being depicted as somewhat familiar if you don’t know the subject’s ennobled name. For this is none other than Benjamin Disraeli, twice Prime Minister and a favourite of Queen Victoria, hence his place just behind the monarch and consort. Disraeli had no connection to Liverpool, unlike his great rival William Gladstone, so what he’s doing here is another mystery, although one suspects the politics of the day. In the background of most pictures taken on St. George’s Place is Wellington’s Column, designed as a counterpart to London’s column to Nelson. Almost identical, it’s hard to make out the details of the Duke all the way up there, although you can just about see that he’s got his sword out, missus. Just in case you weren’t sure who was the subject of this grandiose tower, the plinth depicts scenes from the Battle of Waterloo (winner: Duke of Wellington and associates). 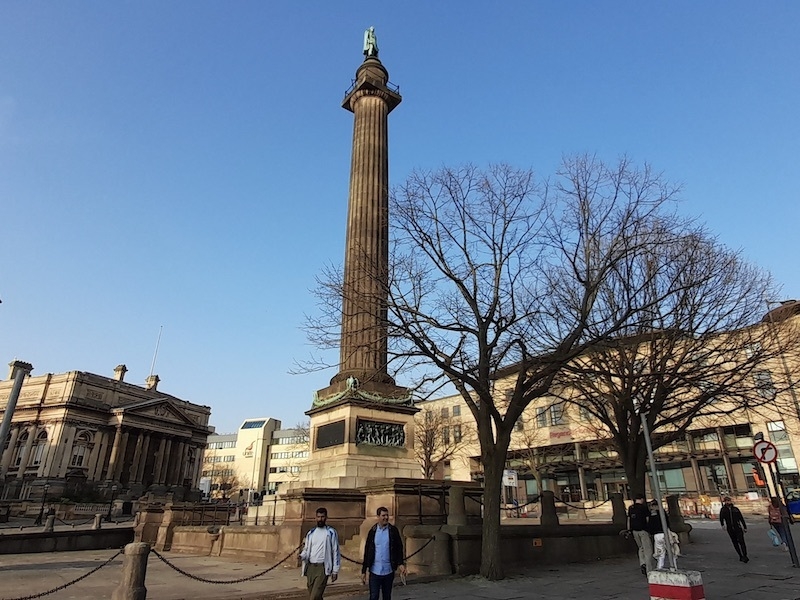 Behind St. George’s Hall we find a lot of statues. It’s teeming with the things. Let’s begin with William Rathbone VI here, one of many Rathbones; local MP, nursing pioneer with Florence Nightingale and founder of Liverpool University (and the University of Wales). Unless you hate nursing and organised education, you can’t possibly take agin him. Sir Arthur Bower Forwood (and gull) was born in Liverpool in 1836, after the abolition of the slave trade in Britain, although he made his fortune in cotton. So, eek. He was also a Conservative MP at a time when Liverpool didn’t run such things out of town. The grand Gladstone Monument makes a lot more sense than Disraeli’s around the other side, seeing as how the FOUR TIME Prime Minister was born on Rodney Street. There have been some efforts to link him with the slavery, because his dad was definitely in the trade, but William gradually broke away from his father after slavery was abolished and later opposed such things as the Opium Wars, and wanted to give Ireland back to the Irish, as Paul McCartney (see below) would later state. The two figures to either side of him are angels depicting Justice and Truth. The two layabouts in front of him were there on the day I took the photo and refused to move. 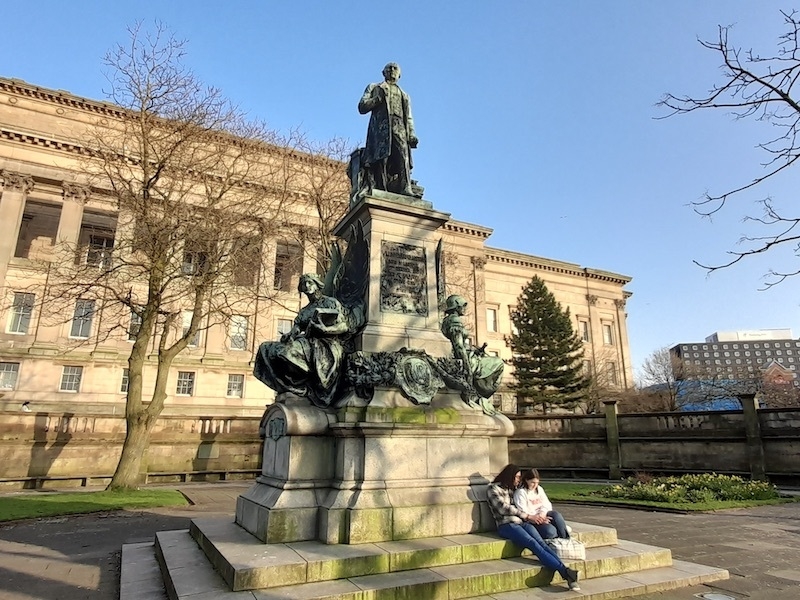 Alexander Balfour was born in Fife and in 1844 moved to Liverpool, where in 1851 he founded Balfour Williamson with Stephen Williamson and David Duncan. Balfour was a businessman and philanthropist who founded the Duke Street Home to create better conditions for sailors and Edge Hill university, which was the first teacher training college for women in the country. He’s a good lad. I couldn’t find out much about Canon Major Lester, apart from being a religious figure involved with various children’s charities and schools. Hence why he is carrying a sleeping girl. I assume he was doing all that for the right reasons. This grandiose thing that is at the centre of St. John’s Gardens is called the King’s Liverpool Regiment Monument and is, as may be surmised, a tribute to colonialism. The three countries written on that curved wall are South Africa, Burma and Afghanistan and you can probably guess what we were up to at the time.

So whilst this may as well be a commemoration of our inventing concentration camps, just look at the size of this thing. You’re not going to be tipping that into the river, especially as you can see that it’s Britannia that is represented at the monument’s centre. She represents many things to many people but I think we have to agree to own what she represents, for better or ill. She is carrying an olive branch. The two soldiers are from different eras: one modern (right), one from the Civil War, both resting their guns on the ground rather than firing them. This is a monument to war rather than a celebration of it.

There is also a lovely detail that is easy to miss. Round the back of the monument itself, and deliberately in shadow, is a depiction of a drummer boy. There weren’t just soldiers involved in these battles. The last statue in St. John’s Gardens is of Monsignor James Nugent, a Catholic priest and indicative of how non-denominational Liverpool is. He’s also depicted with a child and you can infer that he did many good works for children, including founding schools, and was also a founder of the Catholic Times. The original Mersey Tunnel features two royal figures on either side of the road leading into it, welcoming you to the darkness and your disappointing visit to Birkenhead. The first is George V, the queen’s grandad and the last monarch to be killed (by his doctor, for his own good). On the other side is George’s missus, Queen Mary, as depicted in season one of The Crown by Eileen Atkins. 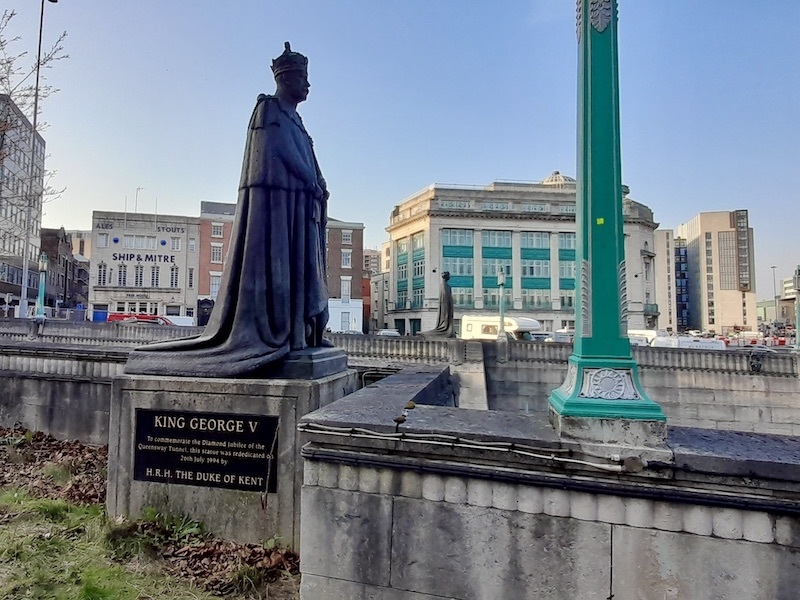 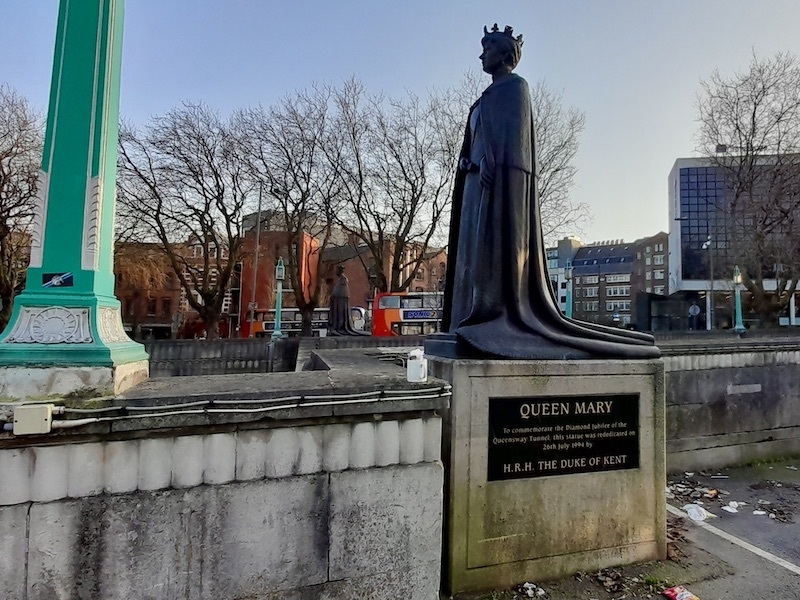 That's the end of Part I - see you next week for Part II of the true stories behind Liverpool's statues. In the meantime, here's a quiz question for you: who was "Liverpool's first Olympian" and where is the statue? Answers on a postcard...

Read next: Paint the town: the best street art in Liverpool