Where can you still get fried chicken in Liverpool?

Clucking hell, there’s a whole lot of choice when it comes to checking out chicken…

These are fowl times indeed. This article was originally written before social distancing measures were put in place and restaurants were advised to close by the government. But no-one can stop us from thinking about fried chicken and all of these restaurants will be open soon enough to fulfil our finger licking' dreams. The good news is, some of the places listed below are still delivering, so read on and get ordering. For those that aren't, you can build up an appetite for when the good times roll round again and we can once again stuff our faces in public.

FOR the flexitarians and full-blown carnivores among us, there are few things more lip-smackingly satisfying than a fist full of crunchy fried chicken. Visit the States, and a fried chicken fix is a dime a dozen – literally – but back here across the pond, it’s less of a local delicacy. So, in bygone times, scratching the itch for something finger lickin’ good meant a circuit round The Colonel’s drive-thru or a trip to Ronald McDonald’s golden arches. 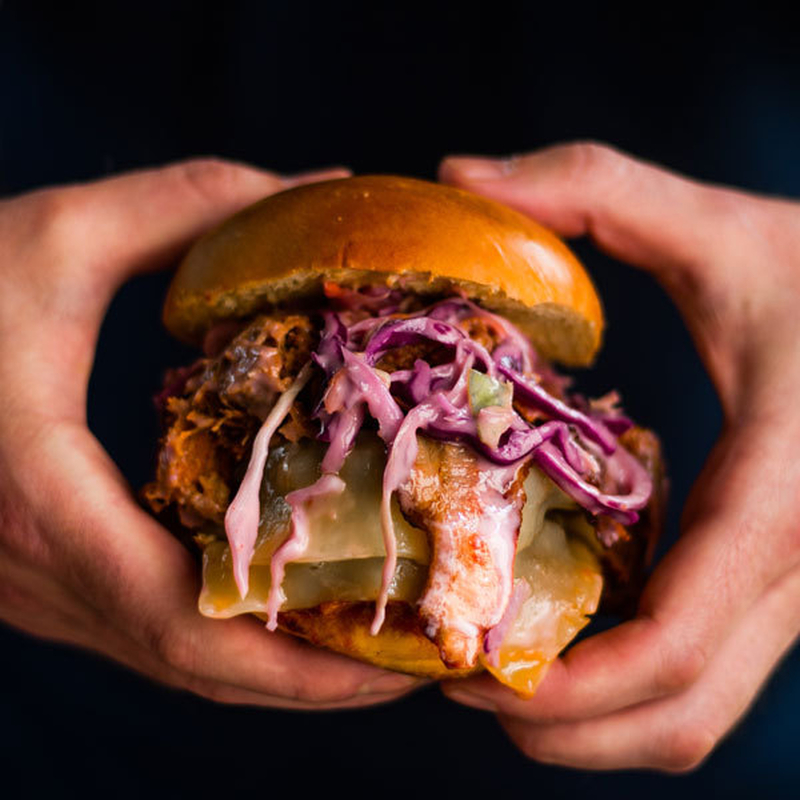 Lately, however, the likes of KFC and Maccy D’s have been rendered fool’s gold – a worthy substitute in the absence of the Real McCoy but no comparison among the big licks. By ‘the big licks’, we mean the raft of restaurants, takeaways and menus that have recently launched purely dedicated to the wonders of the crunchy, golden good stuff. In Liverpool, they’re every which way you turn, and trust us when we say it’s a spin worth getting dizzy over. But if a competition were held for the title of Fried Chicken Champion, who would be the highest flyer? 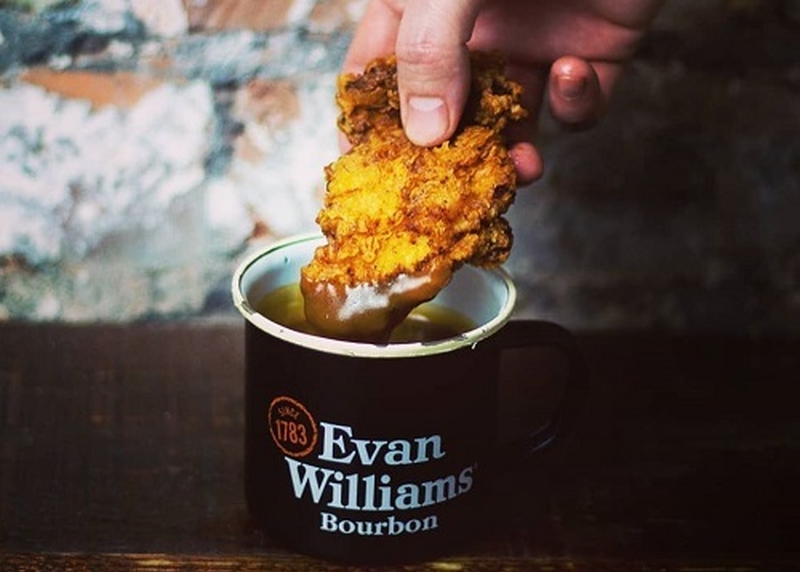 No curation of the best fried chicken in Liverpool would be complete without a mention of Pattersons – the place to be for ‘chicken and tunes’. These guys promise 100% fresh chicken, brined for an entire day in a special blend of herbs and spices, before being soaked in buttermilk for an hour, dusted in even more seasoning and then deep fried to crunchy, golden perfection. It’s a real labour of love and worth every single one of the few seconds it will take you to greedily gobble it down. The chicken here comes served by (uncooked) weight, from 250g to 1kg, and is accompanied by a whole load of sides, gravy and sauces – including one so hot it’s earned the title of Exorcist. Yikes. You’ll also find fried chicken in the starters section in the form of balls and strippers and, well, don’t all the best adventures begin with balls and strippers? 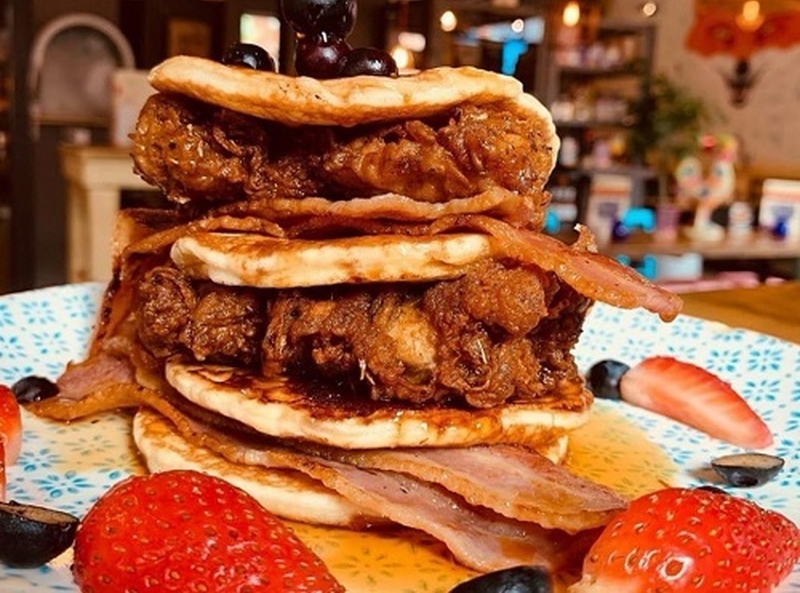 Other than Chicken Run, if you can think of a more suitable name for a barnyard-style restaurant complete with shed seating then we owe you a portion of Monkey Balls. For those unfamiliar with Monkey Balls, they’re Yard & Coop’s famous fried chicken tenders, and if you leave them out of your life for much longer then you’re nothing but a lame rooster. The menu is a pure celebration of fried chicken, from wings, drumsticks and burgers to loaded fries, large plates and the buttermilk Coop Kebab with rainbow slaw and naan bread. Customise your order by picking your cut of meat then choosing from a selection of sauces to slather it in. These guys brand themselves ‘the home of proper fried chicken’, and credit where credit’s due.

Secret weapon: Dr Pepper BBQ sauce. We repeat for those in the back there: BBQ sauce laced with your favourite fizzy childhood kryptonite. 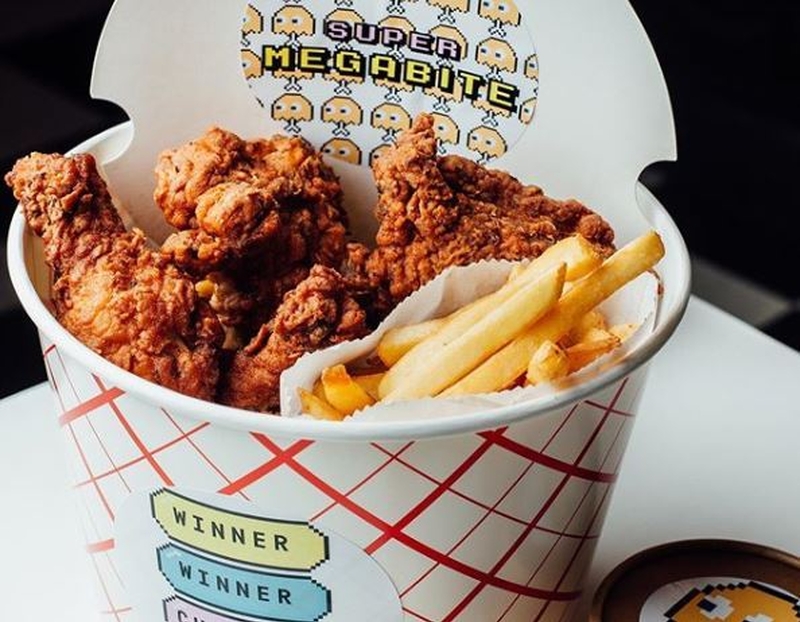 Super Megabite is a relatively new kid on the block but has already worked its way into the popular pack. As we mentioned in our recent review, the unspectacular exterior leaves a lot to be desired but we can confirm the fried chicken is superior. It was launched onto the scene to provide a gourmet alternative to your standard late-night takeaway joint, using fresh, high-quality ingredients. Enjoy pieces of fried chicken by the box or squished between soft bread in the form of chicken sandwiches and the speciality cornflake chicken burger. Get your fill while simultaneously smashing the competition on one of the many arcade games concealed behind a rather ominous black curtain at the back of the restaurant.

Secret weapon: A back room bursting at the seams with retro arcade games, open until 2am Wednesday to Sunday. 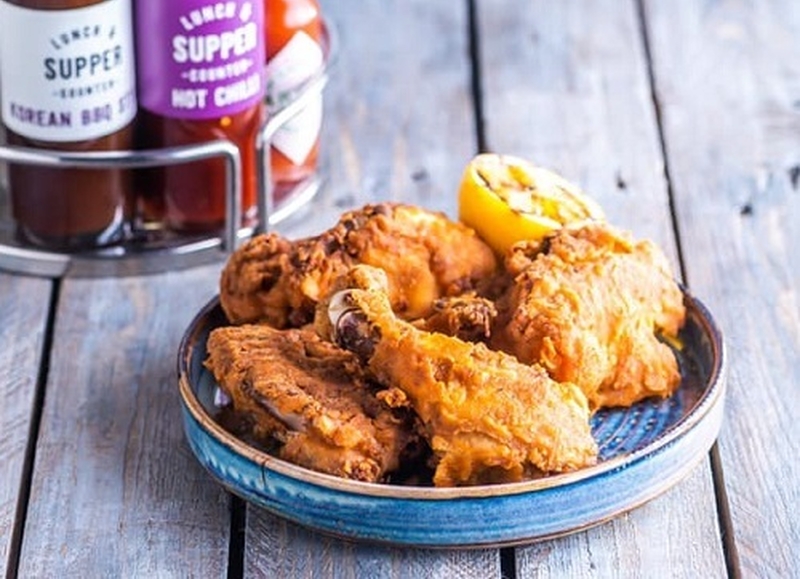 When you think of The Shipping Forecast, you probably think of great beers, epic quizzes and the most Instagrammed toilet graffiti in the entire city. If you haven’t chuckled at Sharpie scrawling reading something along the lines of “yer ma wears Crocs on her hands” while doing your business on a night out in Liverpool, you haven’t lived. What you might not have noticed is the Chicken Society menu nestled in among the pub grub-style Lunch & Supper offering. It offers a well-endowed list of Southern fried chicken in various quantities, from boneless bites to a whole fried bird, all marinated in a fiery concoction of seasoning. Don’t overlook the sides either – we’re talking triple-cooked chips, tobacco onions and ‘posh mushy peas’ with samphire and truffle oil to name a few.

Secret weapon: The classified Chicken Society blend of herbs and spices. If we told you, we’d have to kill you. (Just kidding, we don’t know it either.) 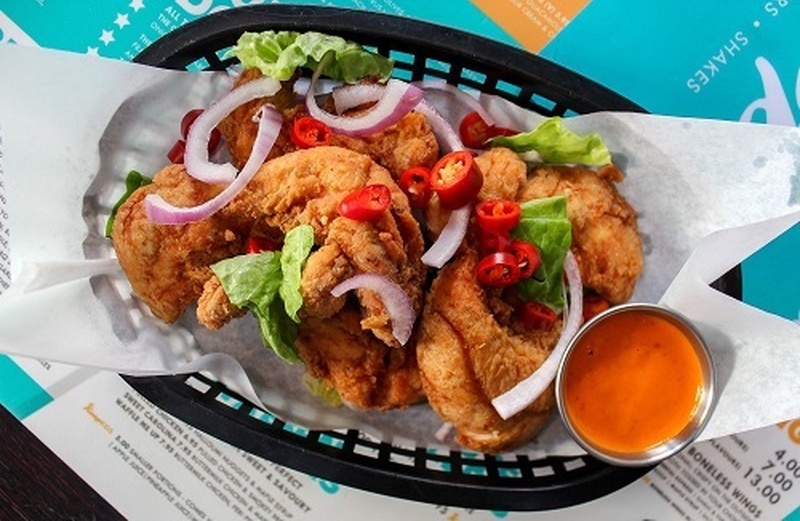 Another aptly named chicken shack, Koop is the place to be if you’re dealing with a bit of a sweet tooth. Wraps and burgers, including The Koop Burger - topped with buttermilk chicken, beef patty, cheese, smoked bacon and caramelised onions - more than satiate a savoury hankering, but these guys have the flipside covered too. The Chicken & Waffles menu seduces with the likes of the Sweet Carolina – warm waffles topped with crunchy buttermilk chicken and lashings of sticky maple syrup. Last one there is a rotten egg.

Secret weapon: A side of Nutella fries. Yes, as in, chips drizzled with Nutella. And if that isn’t a way to bag bonus points, then we don’t know what is.

UPDATE - Koop are still serving via Deliveroo AND Just Eat 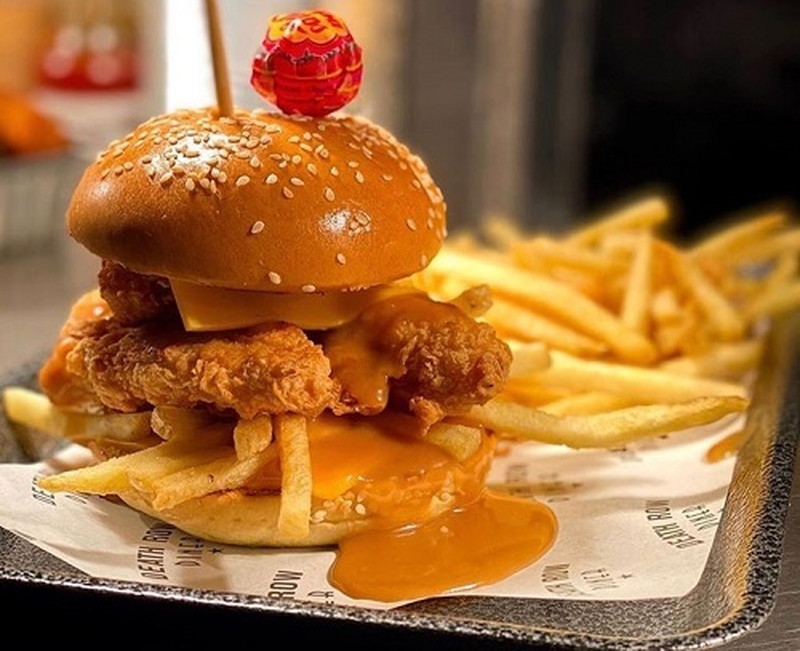 One of the pioneers of the Liverpool junk food scene, Death Row Diner is a strong contender when it comes to serving up stellar fried chicken. It doesn’t dominate the menu here but it pops up every now and then and what a welcome inclusion it is. Sniff out something crunchy and Southern fried in the Meat Sweats part of the menu or head to the Big Ol’ Baskets, where you’ll find chicken tenders (aka Dead Man’s Fingers) partnered with edible embellishments including - but not exclusive to - Texas toast, buttered corn and Padron peppers. Alternatively, go straight for the I Dream of Jesus buttermilk chicken burger (pictured), which is dripping in chicken gravy and stuffed with crinkle fries because it is, indeed, a religious experience.

Secret weapon: Also known as the ‘Home of Lasagne Bites’ because it ain’t just chicken getting the deep-fryer treatment in this gaff. 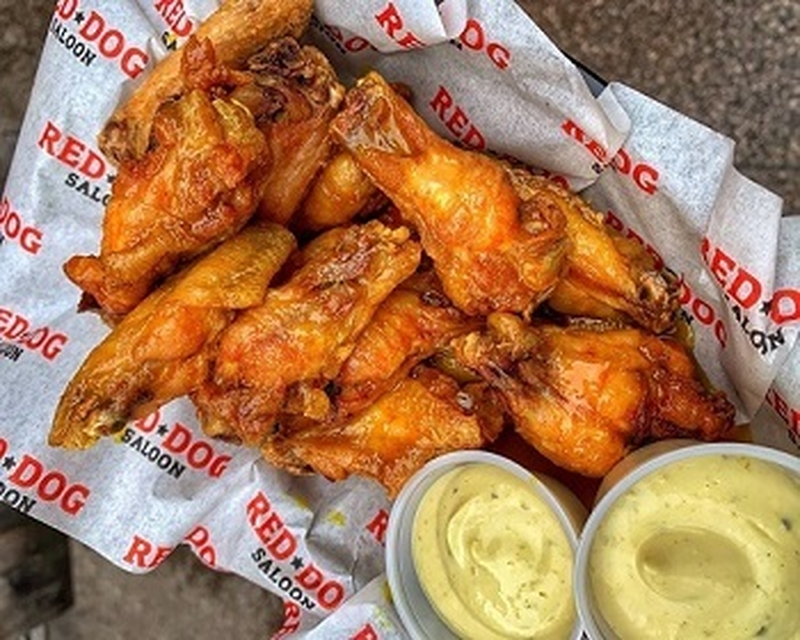 On the high-traffic corner of Bold Street and Slater Street, you could be forgiven for walking straight past this rootin’-tootin’ American-style barbecue restaurant. Sit yourself down in a leather-clad booth, order a bottle of beer or a bourbon, and get stuck into the ample selection of Southern fried chicken plates. Whether it’s wings, a half bird or a stack of jumbo tenders, enjoy yours with house slaw and pickles, plus your choice of reduced-price side. Like getting your hands dirty? Go for the Nashville fried chicken sandwich or the Red Dog Tower buttermilk burger with smoked applewood cheese and hash browns. Something lighter? The Southern fried chicken salad has your name all over it.

Secret weapon: Burgers proudly made with no binders, fillers, stuff or nonsense. All good, honest ingredients. 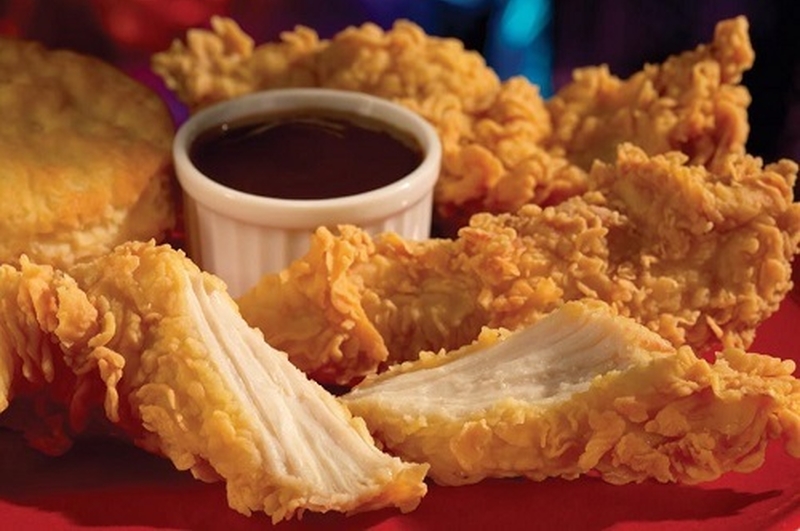 Okay, okay… Nabzy’s might not be of quite the same calibre as all of the above in terms of the overall dining experience and cool factor, but there’s no denying that it’s a bit of a local legend. Its gaudy red façade and sometimes questionable clientele pale into insignificance once you sink your teeth into the goods from this iconic takeaway. Here, fried chicken comes in all shapes (popcorn, strips, fillets, nuggets, wings) and sizes (single pieces, mini buckets, party buckets, family feasts), and it’s authentic as you like. Especially orgasmic when sprinkled with Nabzy’s signature red salt, dunked in garlic mayo so pungent it makes your eyes water and consumed after one too many scoops down the boozer.

Secret weapon: Open to 4am seven days a week for hungry bar-crawlers and anybody who has worked up an appetite dancing the night away.