'Homosexuality is a sin' - Rev Franklin Graham tour will go ahead

“Join Franklin Graham as he shares a personal message of hope and enjoy an exciting evening of live music,” reads the blurb for the God Loves You Tour UK, coming to ACC Liverpool on 14 May. Franklin Graham is an evangelical pastor who has previously claimed that homosexuality is a “sin”, that Satan was the architect of same-sex marriage and LGBT+ rights, and that gay people are causing a “moral 9/11”.

There is absolutely no room for hate in our city, from far afield or otherwise.

Back in February 2020, Franklin Graham was forced to cancel his eight-stop UK tour after being dropped by venues in protest against his beliefs. But the UK tour will now go ahead after he promised venues that he wouldn't be discriminatory.

Graham, a close ally of former President Donald Trump and the son of the evangelist Billy Graham, wrote on Facebook at the time that it was untrue he was bringing "hateful speech" to the UK but reiterated that he believed homosexuality was a sin. 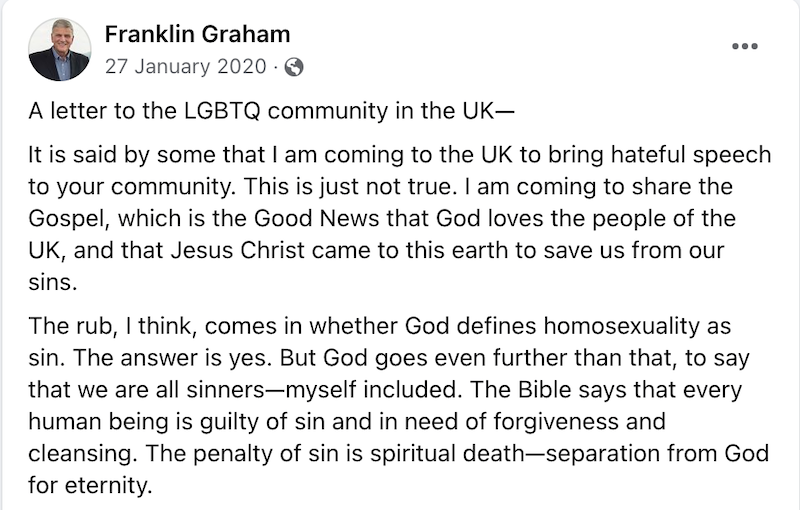 ACC Liverpool was one of the venues that dropped Franklin Graham in 2020, but said they agreed to host his tour in 2022 after they were promised that his message would not be discriminatory.

The God Loves You Tour is the second event at ACC Liverpool to cause controversy. A mass protest took place at the waterfront in September 2021 in response to the venue hosting an electronic warfare conference. Mayor Joanne Anderson said she was powerless to stop the AOC Europe event, despite being personally opposed to it.

In November last year, when it became clear that the God Loves You Tour would go ahead, LCR Pride Foundation said in a statement;

“Hate is not welcome in the Liverpool City Region. We are aware that following legal challenges, ACC Liverpool will now have to host an event in 2022 featuring evangelical speaker Franklin Graham, known for their anti-lgbt+ remarks.

“Alongside Homotopia, we have been liaising with ACC Liverpool and other partners to understand the situation and whilst we are confident they have explored all options, it is clear that the event will go ahead.

“We believe, as we saw this summer, our community comes together to challenge hate. For that reason we are calling on our community, instead of campaigning to cancel the event, to work together creatively to respond and show just how LGBT+ friendly our city region can be."

Rian Bailey-Weir, trustee of The Michael Causer Foundation, said: “There is absolutely no room for hate in our city, from far afield or otherwise. Our foundation was set up in response to an extreme case of homophobia, and it’s disappointing to see that there are still organisations and individuals that promote this attitude.

“Through working with other LGBTQI+ and supporting organisations across the Liverpool City Region, we are making a stand to say that hate is not welcome here. Seeing our friends and partners collaborate on the ‘Liverpool Loves You’ campaign in a non-aggressive stance just shows what we can do when we band together in unity.”

🚨 PROTEST WITH US NEXT SATURDAY 🚨

The Pro-Putin & Pro-Trump Franklin Graham has a long history of hateful comments and spreading disinformation towards marginalised groups, especially against Muslims and the LGBT+ community.

A report from The Guardian showed that recorded homophobic hate crimes soared in the UK after the pandemic. In June last year, Merseyside Police stepped up patrols in Liverpool city centre following an increase in incidents of homophobic and transphobic hate crime in the city. Hundreds of people took to the streets of Liverpool to protest.

Homophobia, transphobia and biphobia have no place in Liverpool. And neither does Reverend Franklin Graham.

Read again: Waterfront gets £22m Budget boost - but we need to talk about Renshaw Street