IF sweat counted for equity, the people behind Mello Mello would be laughing all the way to the bank. But it doesn't.

The building was a nothing short of a bombsite when Greg Scott Gurner and co  took it over in 2007. Nobody wanted it and nobody cared.

Now that's all changed and fans of this grassroots creative honeypot and excellent bar are being asked to dig into their pockets if they want to keep it.

The building has been put up for sale as part of the “Ropewalks Portfolio” with MelloMello CIC having recently had an offer for the purchase of the building accepted! Great news.

Well partly. There's just the question of raising a deposit. 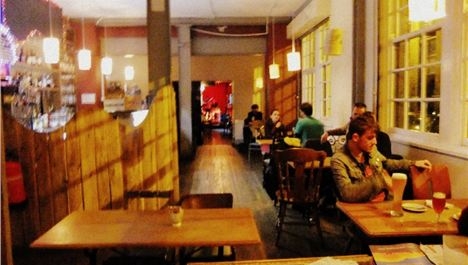 Interest in the building is high and action needs to be swift, they say, if the community is to the prevent the building falling into the hands of commercial developers or corporations looking to turn the property into another chain bar, a supermarket  or, even worse, a corporate hipster venue with bouncers and a bad door attitude (you know who you are).

So they have launched and appeal which we are backing, because this lot don't walk away from a fight.

Mello says it has already secured £10,000 from friends and staff keen to see the building remain in the hands of those who resurrected it from its near derelict status five years ago, turning it into one of Liverpool's most cherished independent cafe bars and venues with nothing more than hard graft and a dare to be different.

They need £30k more and have launched a fundraising campaign where anyone can donate any amount of money for the cause, with a number of limited edition perks available for those who pledge certain amounts.

They have set the target based on the 10,000 people who signed the petition to save MelloMello last year donating £3 each. That is less than the price of a pint.

However, the more money raised the greater the chance of securing a mortgage and keeping MelloMello for good.

Manager Rob Longson says: "This is the community's chance to put an end to the endless speculation around the future of the building and ensure that Liverpool keeps this unique, culturally enriching enterprise alive for years to come."

Go to igg.me/at/mellomello now to donate and to check out the diverse list of rewards.