The last time I ate somewhere that sold their own clothing brand was the Hard Rock Cafe in Florida. Been there, done that, bought the t-shirt. As I sat in Bundobust watching the staff buzz around their wall of merchandise, I wondered if street food had become the new rock and roll. The Okra Fries t-shirt could have been for a pop-punk band playing a sell-out stadium tour with the Red Hot Chili Peppers, Black Eyed Peas and Korn. Yum.

Inspired by the bold vegetarian cuisine of Gujarat, on India’s western coast, Bundobust has grown from pop-ups and kitchen takeovers in Leeds to its third restaurant in the North West. I’d heard Manchester folk talk about this place long before it was a twinkle in Liverpool’s eye; ‘Bundobust Bundobust Bundobust.’ Was the flu going round or were my friends trying to conjure spirits from the underworld? Best not repeat it in the mirror, just to be on the safe side.

The new Bundo baby on Bold Street isn’t the easiest place to find, but look up above Cycle Republic and you’ll see the roaring tiger and a strip of pop art posters proclaiming ‘Indian street food’,  ‘Craft beer’ and ‘Original desi style’. Inside it’s high school cafeteria cool with long tables and benches, big enough to seat the home and away teams plus most of their supporters.

All the food is served in cardboard containers with disposable cutlery, but before you dash off an angry email to Sir Attenborough, it’s worth noting that you won’t find any plastic here. Everything is made from fully compostable plant and renewable materials, with the added bonus that you can easily take any leftovers home with you. Nice one, lid.

The menu is a bit bamboozling for a first time Bundobuster, but help is at hand with combo meals for two and four people, plus the ‘Bundo Combo’ featuring everything from the main ‘munch’ and bar snacks. They say it serves 6 - 8 people but anybody brave enough to order eighteen dishes for £82.50 definitely deserves a souvenir t-shirt in my book.

Casual drinks and beer snacking is welcome too and there’s an impressive selection of real ales if that’s your thing. It isn’t mine, but I still appreciated the bar staff pulling a couple of tasters before I decided on a simple Veltins Pilsener (£4.50) and a pint of the ginger and clove-infused chai spiced cider for my curry buddy (£5.60) which was ‘very Christmassy.’

Popcorn and mini poppadoms (£3) drizzled with green chilli and garlic oil were a cute little twist on the usual indian starters, packing a salty punch that facilitated plenty more beer swilling while the vegan combo for two (£22.50) started to arrive.

The legendary okra fries looked like alien fingers but tasted out of this world; hot, crunchy and well-seasoned with black salt and mango powder. Onion, broccoli and kale bhajis deserved a headline slot as well, crisp chunks of deep fried veggies with hints of chilli and fennel, swept up in an irresistible sweet tamarind and red pepper chutney.

Massala dosa was straightforward in a meat free and two-veg kind of way, a duo of crepe-like rice pancakes filled with cauliflower and potato and a dunking pot of lentil, aubergine and bottle gourd soup on the side. Raghda pethis and bhel puri demanded a quick fork underneath to identify which was which. The former, billed as ‘India meets the North of England’, was a satisfying, stodgy steal on mushy peas and potato cake, topped with turmeric noodles, tomato, onion and spicy chutney. Forget chips and gravy, they should sell raghda pethis in every takeaway across the land. 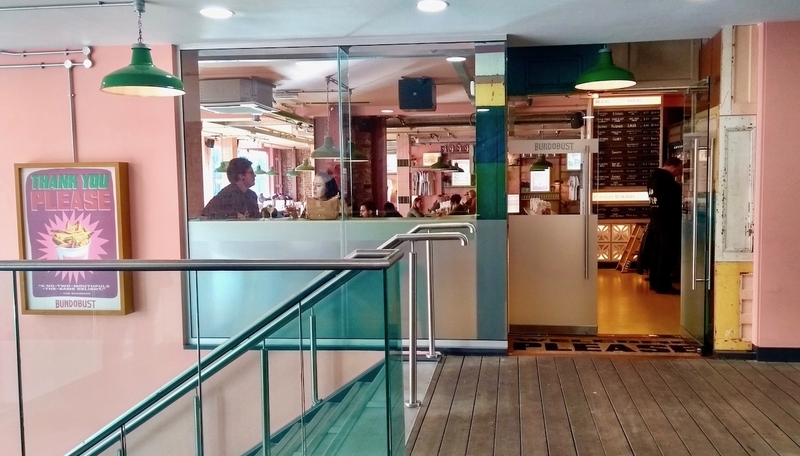 You’re more likely to find ‘Bombay Mix’ on the decks here than the menu, but bhel puri wasn’t a million miles away from the classic noodle nibble. Tamarind chutney and pomegranate seeds added some zing but it was my least favourite dish and I had to query the mention of samosa pastry on the menu that must have been buried deep underneath the puffed rice, peas and onion mix.

A last minute addition of tarka dhal (£6) was a good call, a thick golden layer of cumin, garlic and chilli flavoured lentil curry floating on fluffy basmati rice. It was tasty but uneventful and I felt like my go-to Indian favourite could have done with a little Bundobust twist in keeping with their signature creativity.

Three times is a charm and Bundobust Liverpool continues to make the magic happen with budget-friendly veggie sensations that will satisfy the craziest of carnivores. I could have easily been upsold some kachumber sambharo and the sauce trio with desi ketchup, but I’ll be back soon enough to eat my way around the rest of the menu. Next time I might even bring some extra cash for a t-shirt; see you down the front. 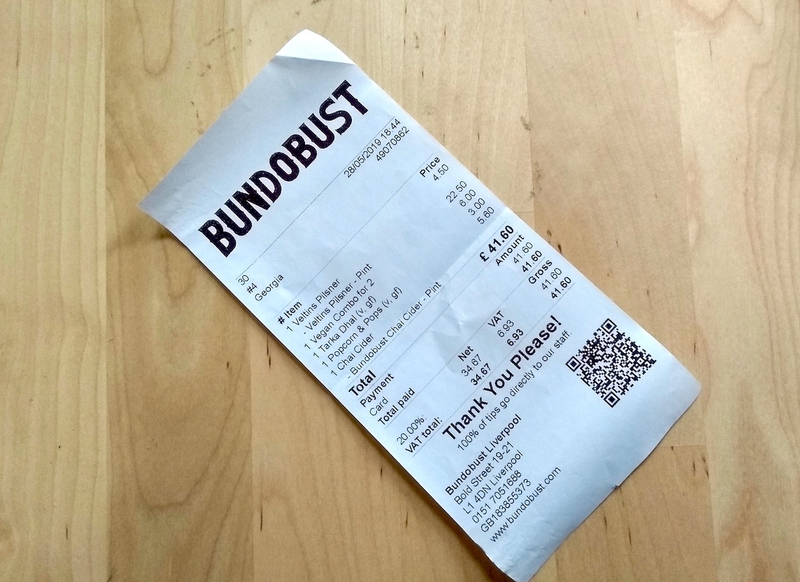