As an artist, musician, singer, actor, collaborator and wearer of amazing outfits there is no one quite like Björk.

So we are thrilled to hear that the music pioneer and Iceland’s most famous human will be back round our way next summer to headline the Bluedot festival.

Björk will be collaborating with Manchester’s legendary Hallé Orchestra with all arrangements by the star. The new orchestral audio-visual work promises to be a ground-breaking expression of a life at the cutting edge of experimental music, not to mention an incredible spectacle.

Well it is Björk after all. We expect she can make going round Tesco on a Saturday morning into an incredible spectacle if she chooses to.

The Bluedot Festival (named after Carl Sagan’s term for Earth as the "pale blue dot") brings together the arts and the sciences for a four-day extravaganza at Cheshire’s Jodrell Bank. The iconic Lovell Telescope has previously provided a stunning backdrop for acts as varied as Kraftwerk 3-D, New Order, The Chemical Brothers, Pixies, The Flaming Lips, Underworld and Jean-Michel Jarre, plus high-profile talks from Brian Cox, Helen Sharman, Alice Roberts and Richard Dawkins.

The Björk show will go one step further, however. This will be the first time audiences at Bluedot have seen the dish of the 76-metre wide telescope surface transformed into a gigantic digital artwork. The audio-visual performance will feature video and animated projections onto the disc, for a unique show exclusive to Bluedot. 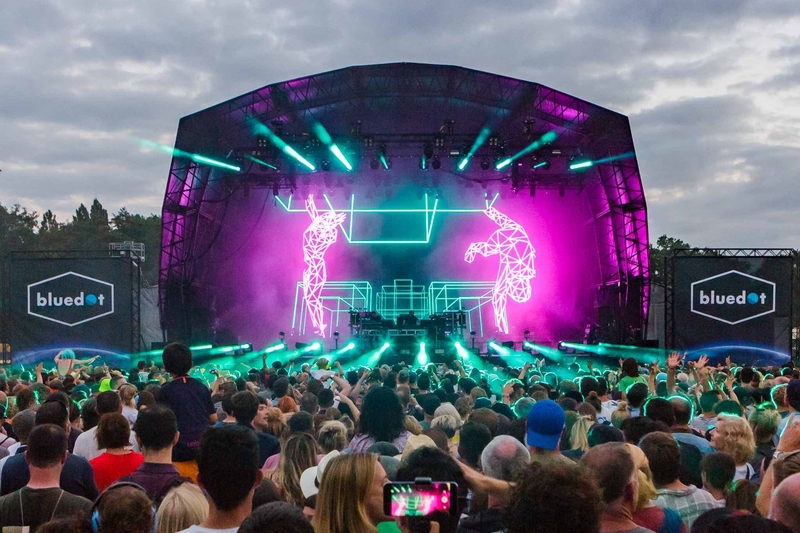 The idea of Björk as headliner was mooted back in 2020 before the Bluedot team decided to pull the festival that year due to the pandemic. Since then, the organisers have created a Bluedot podcast, with topics as diverse as How to Cure Covid and The Theremin Story, and hosted A Weekend in Outer Space, an online event mixing live specials with the best bits of Bluedot’s past.

Festival director Ben Robinson said: “After the postponements of the last two summers we wanted to return with something extra special and unique. We spoke to Björk’s team about curating visuals to accompany the show and being the first confirmed artists to project onto the surface of the Lovell Telescope at Bluedot festival. Björk and her team are already working on this unique spectacle and we are incredibly grateful for their enthusiasm for making the closing set of Bluedot’s return truly unique.”

Björk has of course previously wowed audiences at the Manchester International Festival in 2011 and 2015, and also co-written songs with Graham Massey of Manchester electronic act 808 State.

Teresa Anderson, Director of the Jodrell Bank Centre for Engagement, added: “We’re delighted to welcome Bluedot back to its home at Jodrell Bank. Björk is an artist who works on the creative common ground between art and science so it’s amazing that she will be headlining the festival, here at the UK’s home of Astrophysics. We’re really looking forward to seeing everyone again!”

Back in 2016 we reported on how funding fears had threatened Jodrell Bank’s future, but that protest and petitioning, as well as exciting cultural innovations such as Bluedot, had secured its future, writing: “Jodrell is, after all, British science history personified in the form of that beautiful white disc.” Since then it has been named a UNESCO World Heritage Site.

Bluedot takes place at the Jodrell Bank Observatory 21-24 July. Tickets go on sale at 10am on Friday 10 September.

Coming Out - Homotopia 2021 will be 'loud, proud and extra fabulous'
What you say
Previous Article Next Article
Read Next
● / Live / Gig