Bar Essentials: The Garden at the Kazimier, Liverpool

Where?
A car park in Seel St. Don’t say we don’t know how to show you a good time.

When?
Thursdays to Sundays every week this summer, noon till midnight. Unless it's tipping it down, when, naturally, you can forget it. 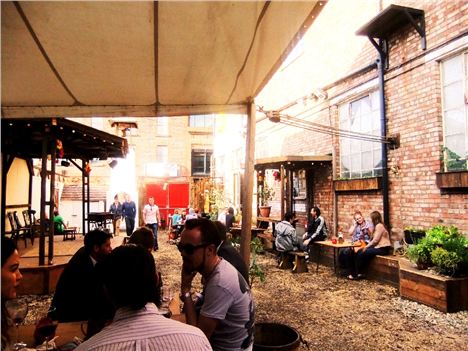 What’s the story?
To quote the blurb: "The Garden is a summer long drinking establishment like no other in Liverpool. A hybrid space bridging natural and urban environments to form a post biogenic wonderland."

Er, if they say so, but it is certainly true that this secret garden is like no other we’ve ever had a few in.

The Garden is brought to you by the collective behind the hugely successful Kazimier club in Wolstenholme Square.  Good things come from this lot who, without a whiff of corporate indie about them, manage to be cool without conscious effort. 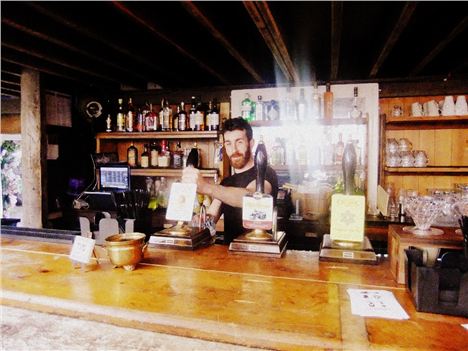 What’s the craic?
For this caper, the team have taken over a car park next to the Liverpool Academy of Arts and have walled it off. Where once there was concrete and tyre tracks now lies gravel and wood chip. Lanterns, forged from metal in their own adjacent workshops, sit on roughly hewn tables. A formidable bell tolls from a Mexican-style tower at the entrance. Nooks and crannies abound, soft music lulls you stick around. There's a covered wooden bandstand, a mezzanine roof terrace and, of course, a perfectly fine and dandy bar.

Shouldn't we be keeping this a secret?
Probably. But on the other hand, it's buzzing already and who hasn't read a life-changing snippet about something, somewhere? In an often grey cityscape, it is possible for the unclued-up to find one's people through these things. 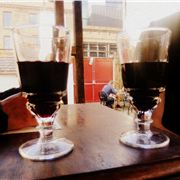 Who goes there?
This is by no means an exclusive establishment and on our visits we have observed everyone from hippies, middle aged couples passing by, young executive types in suits and the city's artistic element.  There is nobody on the door telling you that your clothing is inapropriate for the feel of the establishment, nor does anyone demand to know where you have just come from before they let you in. Unlike, say, The Shipping Forecast.

That's entertainment
There is a jam packed programme of events blooming in The Garden. This weekend, for example, sees everisland taking charge, transforming it into a "playground for your imaginations", meaning a marching band, live music, DJs, art installations the official launch for Stealing Sheep's new single. Other times there are screenings of films, plus fairs, workshops and sunsets.

When it isn't raining.

What's yours?
See below. 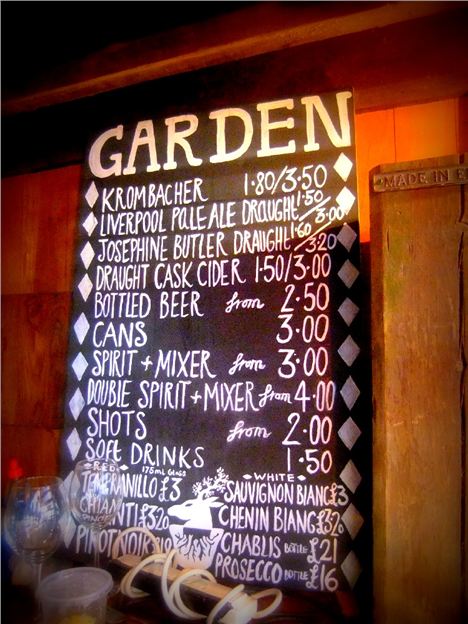 Grub up
Food is serverd from 3pm in the form of a vegetarian food counter powered by Mello Mello, but a more meaty barbecue is sparked up to get the weekend sizzling in style. Then there are gastronomic banquets pencilled into the calendar, pop up paella stalls and guest chefs. The veggie lasagne must be the bargain of the century at £2.50, a perfectly acceptable cheesy feast.  The Kazimier Garden hasn't gone down the road of mess tins and enamel camping plates, a la Lucha Libre and Camp and Furnace. Instead food is heaped into a polystyrene container and your cutlery is plastic. (Ed's note: Ha ha, that's what you think! Actually both are made from biodegradeable corn starch, in keeping with the organic ethos of the kitchen, we have been told off). 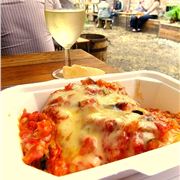 But, hey, polystyrene? cornstarch? Who wants to pay extra for someone to wash up?

Verdict
As the year anniversary of the death of the Everyman Bistro passes and its regulars dissipate far and wide, here we have a Garden of new, young shoots. It's greatly encouraging to see the Kaz opening its box of tricks to the daylight and to those people who can't necessarily muster the will to go out into town on a Saturday night, whether it is to one of their interesting happenings or not.

In short, a blast of fresh air.

The detail
The Kazimier Garden, 32 Seel Street, Liverpool, L1 4BE.