Davey Brett returns to Liverpool to eat some, but not all of the pies

I’m back in Liverpool and not everything feels the same. I haven’t been to the independent republic in almost a year and a half and although a quick walk from Lime Street Station to Albert Dock suggests everything’s pretty much as it was - The Blob Shop and Coopers included (thankfully) - it appears that the times they are a-changing on the waterfront.

Times are hard and friends are few. And so are options on the menu

The Royal Albert Dock has always been an odd one. The country’s single largest collection of Grade I buildings, flanked by some of the best cultural institutions outside of London (Tate, International Slavery Museum and Open Eye Gallery) and now with Blue Flag accredited water quality. Yet, up until recently, the units making up the Dock’s quad-shaped walkways were, well, a bit crap.

It was a place for tourists. Why would anyone local venture down for a farty lager at The Pumphouse and a coffee at one of two branches of Costa? Why venture beyond the pubs of the Georgian Quarter and the coffee shops of Bold Street?

Now it appears there’s a play to tease those people out.

My dining partner today is one such man. Wool by birth (St Helens) but with enough time spent growing up in Speke to count for something, he is arguably someone The One O’Clock Gun is trying to attract. He’s also the only person I know who didn’t go to the launch, making him the ideal guinea pig.

Times are hard and friends are few. And so are options on the menu. No chicken liver parfait in tonight (Tuesday) so we go for gun nachos (£6) and a charcuterie board (£12.50). No One O’Clock Pale on tap either which is another blow so we opt for it in can form (£4 each).

Inside it certainly looks the part. Small round tables and leather banquette seating in the corner near a picturesque window look inwards at a grand central bar. Internally it wouldn’t look amiss in the Georgian Quarter. DJ decks on the bar suggest it probably gets a bit livelier at the weekend too.

Our nachos arrive along with the charcuterie board. The nachos are great. Blue corn tortilla chips (our server ensures us they’re not burnt when I enquire about the colour) loaded with salsa, cheese, guacamole and a generous drizzling of sour cream. All fresh tasting ingredients, with each element holding its own and a welcome mix of chew and crunch. Solid beer food.

The charcuterie board feels a bit cheeky at £12.50. Three pieces of fennel salami, coppa and pastrami, a ration of pickles, a few oatcakes, a meal deal’s worth of red onion chutney and two small pots of green olive and sun-dried tomato tapenades. I wanted more because it was decent but I also wanted more because it was £12.50. Wool Runnings wasn’t impressed and said they do a better one at Ropes & Twines.

For mains it’s pies unless you want a £7-9 sandwich. Great North Pie Co pies to be exact, which in itself is somewhat bulletproof. I opt for beef and ale whilst All Saints goes for roast chicken and mushroom (both £12). Both come out steaming hot in an aesthetically-pleasing bowl, sat atop creamy mash, mushy peas and bathed in gravy.

All The One O’Clock Gun has to do really to be above average is heat the pies and not mess up the mash and peas.

Which is what they did. With solid results.

Great, carby, warm, comfortable beer food, again. Great North Pie Co isn’t stingy with the filling so you’ve got all this braised, tender shredded beef pouring out onto creamy mash. The gravy has depth and the peas give it that much-needed taste of slightly sugared vegetable to differentiate it from the texture of the mash.

Meanwhile, St Helena enjoyed his chicken and mushroom version but was not blown away. We wash it down with a can of Carnival’s All Clouds Are Silver Pale each (£6 a can).

Pudding arrives in the form of sticky toffee pudding (£6.50) for Speke Easy and a chocolate brownie (£6) for me instead of the brûléed lemon tart which isn’t on today. Both are indulgently sweet, the sticky toffee pud an island marooned in a butterscotch sea, mine warm and not overly dense with the ice cream a welcome addition. All very fine.

Having paid the bill at the start of the meal we head off for a jaunt to town past Revolution and Miller & Carter, both rammed.

The One O’Clock Gun is not The Merchant. Nor is it The Baltic Fleet or The Grapes. It’s not a gastropub, but with only five beers on draught, two being Heineken and Amstel, the other being their own pale ale (if it’s on), it doesn’t really feel like a proper pub either.

If anything, it feels like a slick waiting room for Maray next door. A place to eke out a visit to The Royal Albert Dock, which when you consider how far this part of the waterfront has come, can only be a good thing. 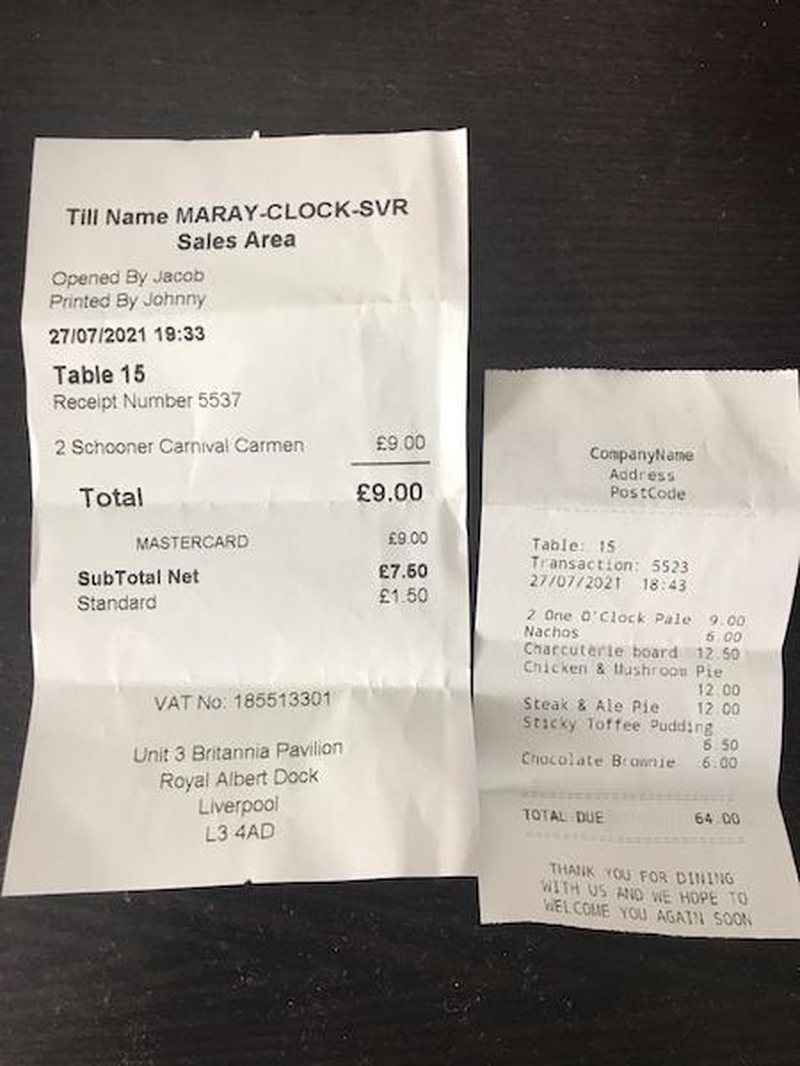