Walton, a 'stitch up' and the woes of Joe

Is a civil war about to blow in Liverpool's Labour ranks?

IF the latest opinion poll is correct, Jeremy Corbyn and the Labour Party face the mother-of-all beating on June 8.

The anti-Corbynites, should the prediction come true, will argue that if only JC had seen the light and let the Labour Party “get back to normal” after Ed Milliband's 2015 resignation, everything would have been all right on the night. Or as any sensible political observer may have said: Just as if.

No. Labour’s civil war will continue, risking the future of the once great political machine that planted the welfare state and gave hope of equality for all.

Love or loathe him, there is no doubt Anderson would have been a diligent warrior for Liverpool at Westminster

Meanwhile, in Liverpool, there’s a mini-civil war ready to blow, delaying firing the first salvos until  the morning of June 9.

The battleground will be Walton and the latest decision by a panel of NEC members to plant relative unknown Dan Carden to contest the seat vacated by the newly elected metro mayor, Steve Rotheram.

Liverpool Mayor Joe Anderson had set his sights on being Labour's metro mayor, long before Rotheram or any other pretender came into the frame.

Instead, by a thumping majority, Labour Party members, across the six boroughs that make up the city region, opted for Rotheram as their candidate.

Among voters, such is the strength of Labour support that whoever was picked was guaranteed success in the race to become the first metro mayor over a manor of over 1.6 million people. Anderson was bruised by that decision.

Beaten but not unbowed, Anderson then let it be known that he had his sights on filling the vacancy destined to be left by Rotheram, the serving Labour MP for Liverpool Walton.

Mayor Joe wanted to head to the House of Commons to fight the corner for people in the north Liverpool seat against the Conservatives who have starved the city of much of its funding.

Love or loathe him, there is no doubt Anderson would have been a diligent warrior for Liverpool at Westminster.

Yet in what turned out to be a wasted train journey, Mayor Joe headed to London to be interview for the vacancy. Only to come away, yet again, empty handed.

Back in Liverpool, those Labour members loyal to Anderson described the decision as a stitch-up.

Before the dust had settled on that bombshell, it was reported that former Lord Mayor and former Labour leader in Liverpool Frank Prendergast was aiming to resign as chair of Walton CLP.

But in a message after the decision was announced, Mayor Joe made it clear any more scrapping would be put on the back burner until after the general election, "after which there will be more to say" (see the full statement below).

Labour in Liverpool has always been described as a broad church, but some see it more as a congregation of knife-throwers.

There have been splits and divides going back decades in the Labour movement. The rule under Mayor Anderson has seen several years of relative harmony within the group.

What will happen if and when the “war” explodes in June remains to be seen. One thing is guaranteed: a  new Labour MP for Walton - even if some disgruntled members and constituents fail to offer their support in protest at an NEC-imposed candidate over “one of their own”.

Yet with the polls currently indicating an even stronger grip on power by the Tories, all those Labour movement factions with eyes to see must understand the need to become allies rather than combatants.

The genuine needs of Merseysiders are even bigger than those of the warring egos in the Labour Party.

'Not good enough for the panel and everyone knows why' 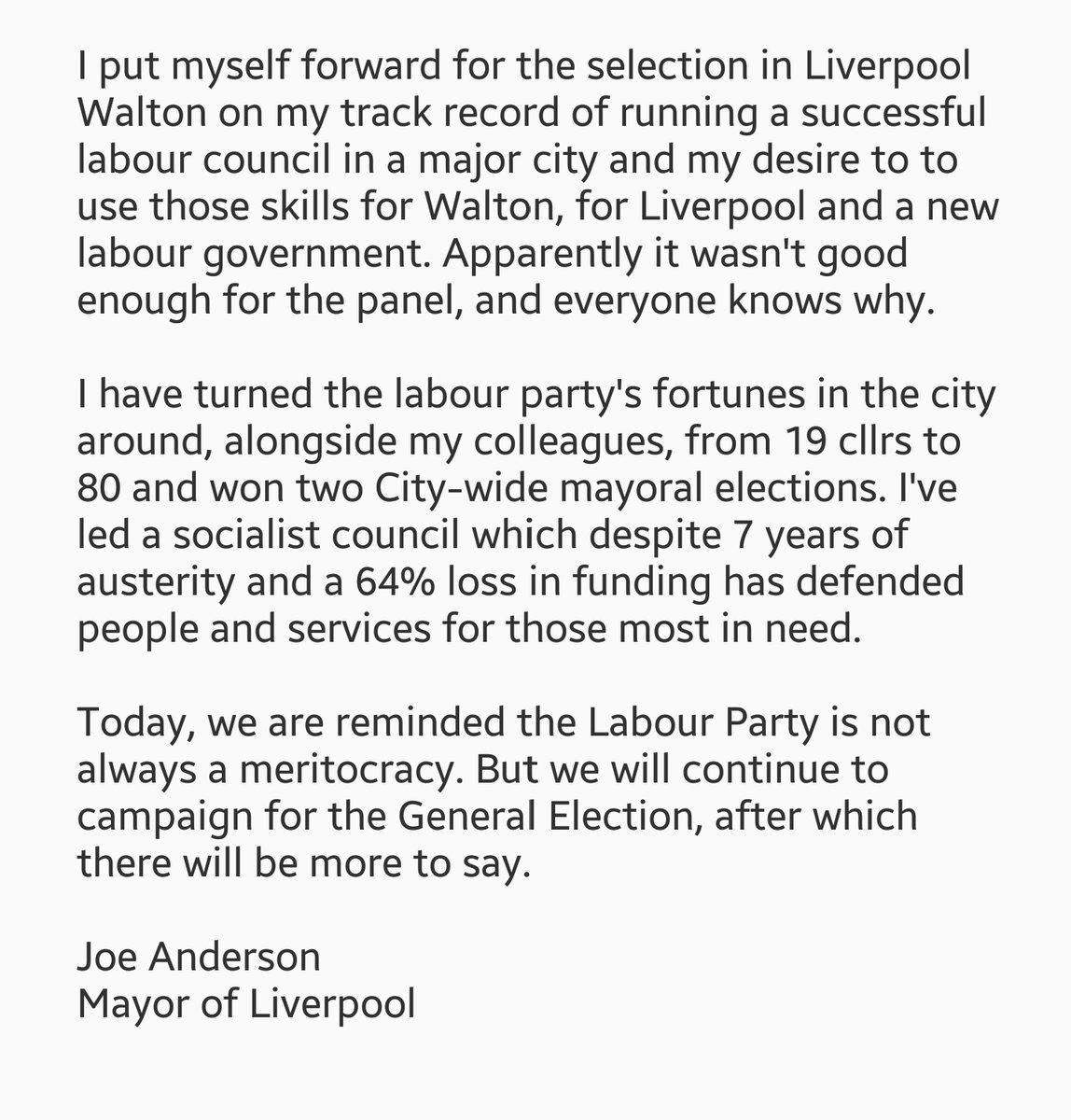